Githio - the Picturesque Harbour of Mani 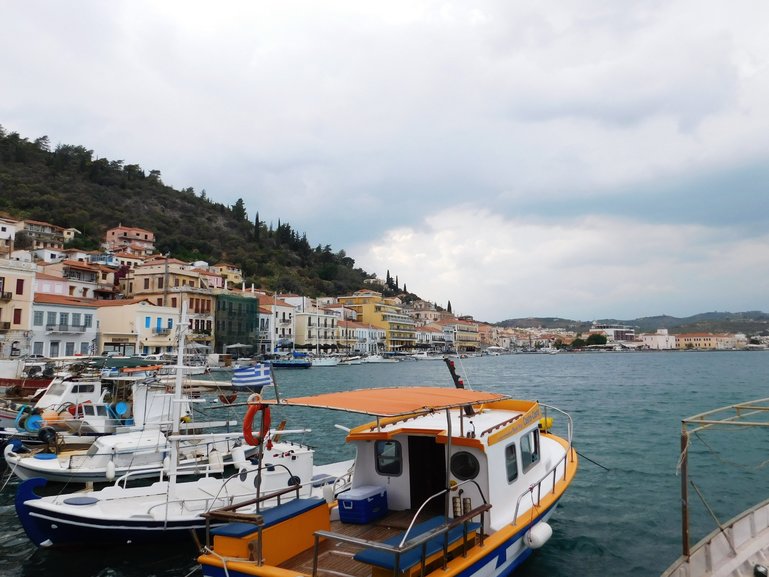 The story of Gythio (or Githeio/Γύθειο) in Peloponnese (Greece) begins with a love story. According to the legend, on the small island of Cranae (or Kranai/Κρανάη), Paris and Helen spent their first night before fleeing to Troy. This island, known today as Marathonisi (Μαραθονήσι), is the ancient settlement of Gythio. The city was an important port until it was destroyed in the 4th century AD, probably by an earthquake. After the earthquake, Gythio was abandoned. It remained a small village throughout the Byzantine and Ottoman eras. Its importance increased when Tzannetos Grigorakis built his tower on Cranae and more people came and settled here. During the Greek Revolution, refugees flooded Mani and made Gythio a large town. Today it is the main harbour of Mani (Μάνη) and Sparti (Σπάρτη) and considered also the capital of the region of Mani. 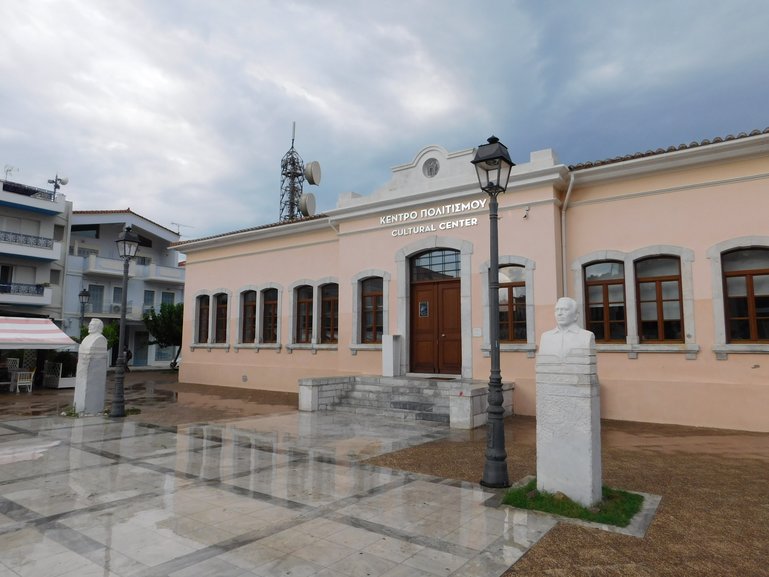 The town is built amphitheatrically at the eastern foot of the ancient Larysio Mountain (Λαρύσιο Όρος), which today is called by the locals Koumaros (Κούμαρος) and just above the port. It has an island atmosphere and a manorial ambience. The long walk along with the port, the impressive neoclassical buildings, the wide streets and the unique colour of the town win the visitor from the first moment. 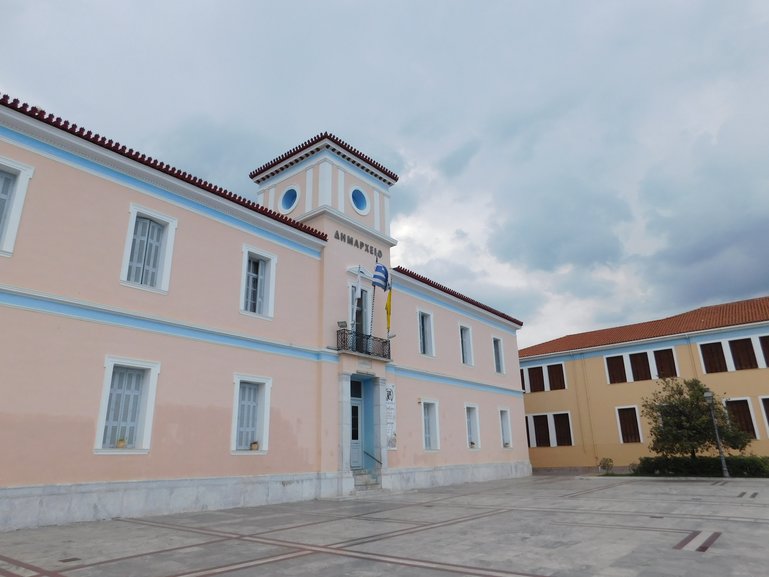 But let's take a walk in the historic town starting from Panagiotarou Venetsavaki Square, where the beautiful and elegant building of the Parthenagogio (Girl's School/Παρθεναγωγείο) is located. The building was built in 1886 by the famous architect Ziller and today houses the Cultural Center of the Municipality. Walking a few metres to the beach we find the equally beautiful building of the Town Hall (Δημαρχείο), built in 1891, which houses the Ancient Greek and Byzantine Collection of Githio. 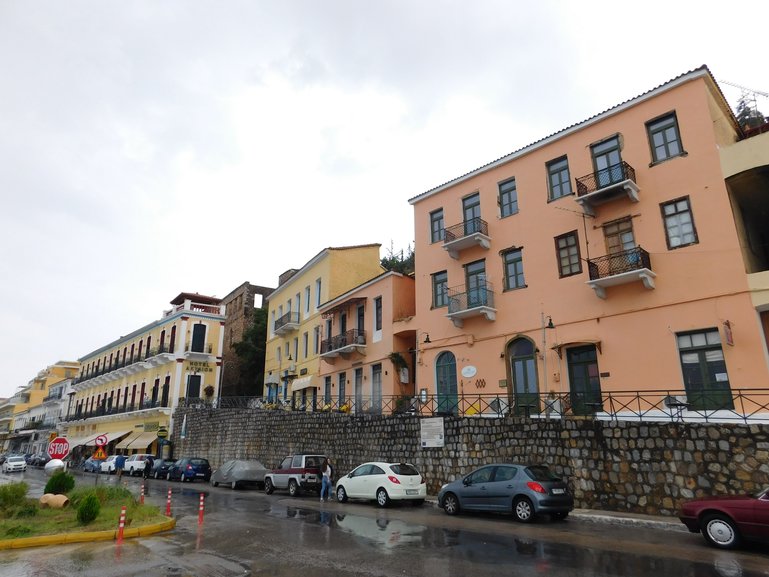 Continuing parallel to the sea along Vasileos Pavlou Street and heading towards the port, we meet the impressive building of Aktaion Hotel(Ξενοδοχείο Ακταίον). The building has traditional architecture and the Ministry of Culture has designated it a "preserved building of excellent beauty". Its neoclassical line makes it the most beautiful and characteristic building of Gythio. At this point, it is worth taking a detour and walk along Laryssiou Street (Οδός Λαρυσσίου), parallel to the waterfront and behind Aktaion, to see some of the most impressive houses in the town. The mansions on the street have unique architecture and used to belong to the rich families of Githio. 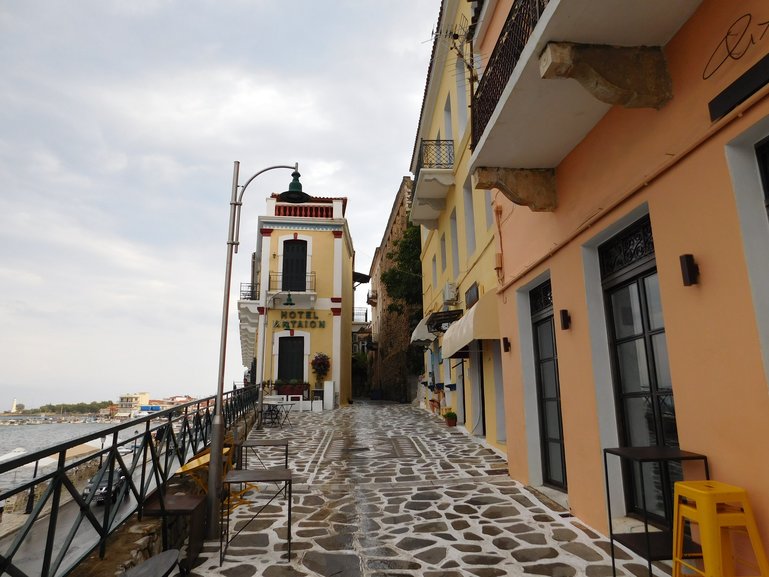 From Laryssiou Street we return to Vasileos Pavlou Street and walk until Petrompeii Mavromichali Square. The square is in the middle of the fishermen's port and is famous for its fish taverns. From the square, at the end of Grigoraki Street, you could see the picturesque church of Agios Georgios (Άγιος Γεώργιος) and its imposing bell tower. 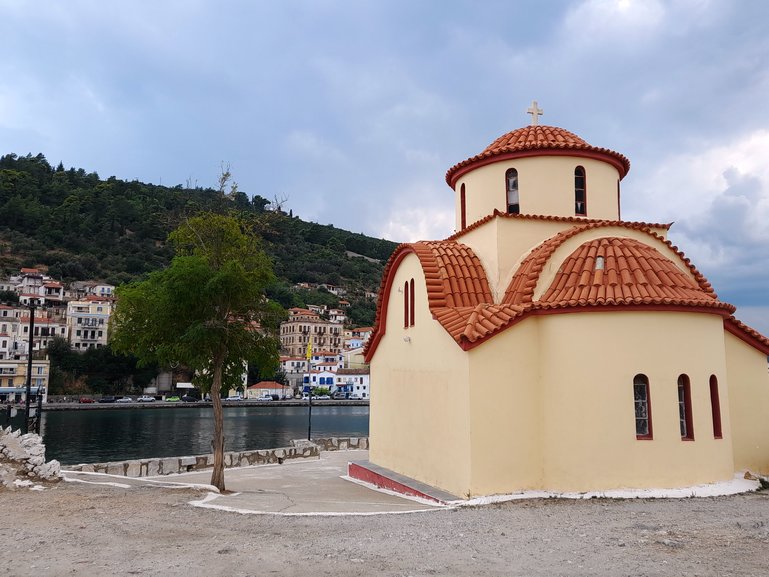 The last stop during a visit to Githio should be the small island of Marathonisi. The southern end of the city of Gythio is connected by a small pier with this small island, the ancient Cranae. The name Cranae (or Kranai) originated from the Greek word kranos (which means helmet). According to the legend (we have mentioned above), Paris during his stay on the island with Eleni lost his helmet and gave the island its name. On Marathonisi you could visit the small church of Agios Petros (ΆγιοςΠέτρος), the octagonal lighthouse and the impressive Tzannetakis Tower (Πύργος Τζαννετάκη). The Tower was constructed in 1829 and today operates as the Historical and Ethnological Museum of Mani. 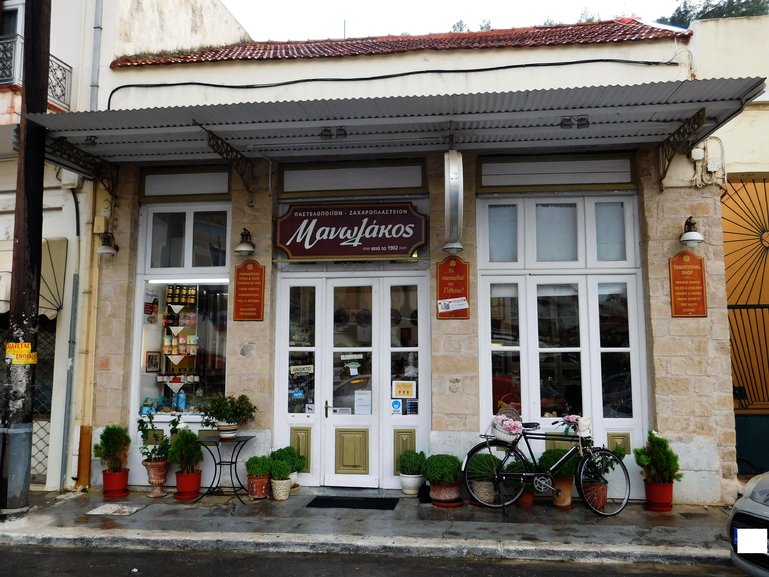 No visit to Gythio is complete without eating in one of the famous fish taverns of the port. Although there are many good taverns, our choice is Trata (Τράτα) (Prothypourgou Tzanni Tzannetaki). A family tavern with traditional Greek dishes, excellent fresh fish and unique flavours (do not forget to try the traditional Mani pies). Outside the area of the port, another excellent solution for dining is the restaurant Diosmos (Δυόσμος) (Ioannou Grigoraki 20), wherein a very aesthetically pleasing space, the traditional Greek cuisine is mixed with modern elements and the result is unique.

Before leaving Gythio, however, it is almost obligatory to visit one of the best traditional pastry workshops of the Peloponnese. Manolakos (Μανωλάκος) (Vasileos Georgiou 5) pastry shop has been making pasteli (παστέλι), a kind of sesame candy, since 1902 with a recipe that dates back to the years of Homer. Always fresh, delicious and in sixty different variations, it is a healthy snack for every hour of the day. Apart from pasteli, here you will also find (among a wide variety of traditional products) excellent lalaggia (λαλάγγια), which are a kind of fried pancakes and a tradition in Messinian and Laconian Mani. 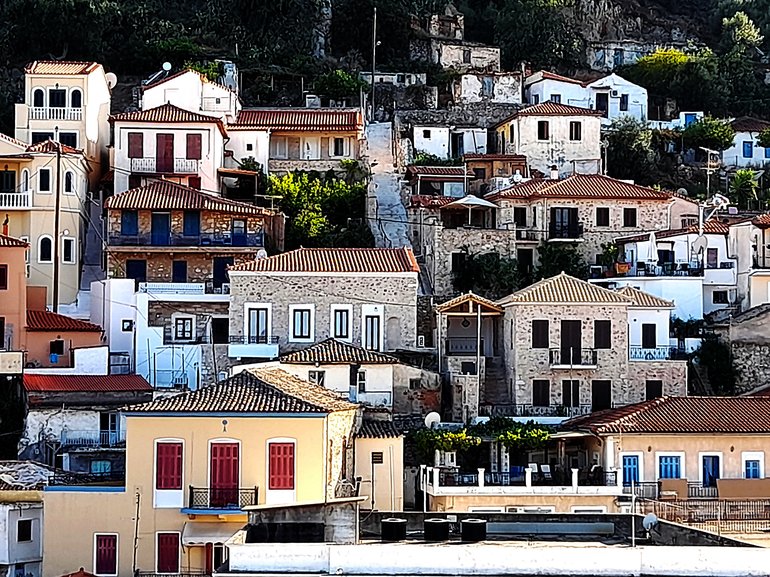 Gythio is an ideal destination for all seasons. Island atmosphere, traditional colour, sea air, nobility and good food are the combination that makes Gythio unique. 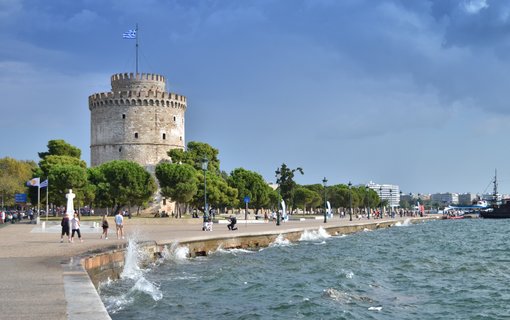 Top 5 Places to Visit in Thessaloniki 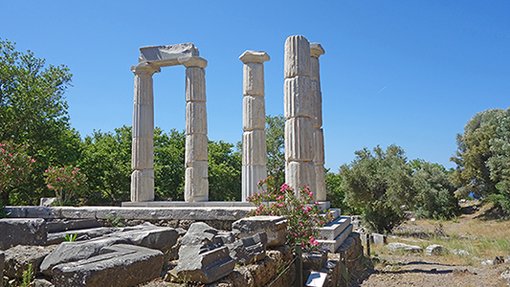