Aiolou is one of the most historic and characteristic streets in Athens' centre. A walk down this pedestrian street is like walking through the city's history and past. It starts near Omonoia square and ends in Plaka near the Roman market.

Aiolou Street, named after the ancient Greek god of winds, was designed by the architects Stamatis Kleanthis and Eduard Schaubert in 1833 as part of the town planning for which they were assigned by the new Greek state. The first restaurant of the city opened here in 1830 and the first theatre in 1835. In 1860 it was the first street in Athens laid with gravel. During the next decades, many important neoclassical buildings were built here and after WWII many modern buildings with eight or ten floors. It was during this period that Aiolou was the main commercial street with many shops, mainly selling clothes and fabrics. After the 1950s the area began to lose its commercial importance as other streets like Ermou and Stadiou became more popular. In 2003 its pedestrianization gave the street a new life and during the last decade, it has become a popular area with many bars, cafes, and restaurants (basically around Agias Eirinis square).

But now let's start our walking tour down Aiolou street from Omonoia to Plaka : 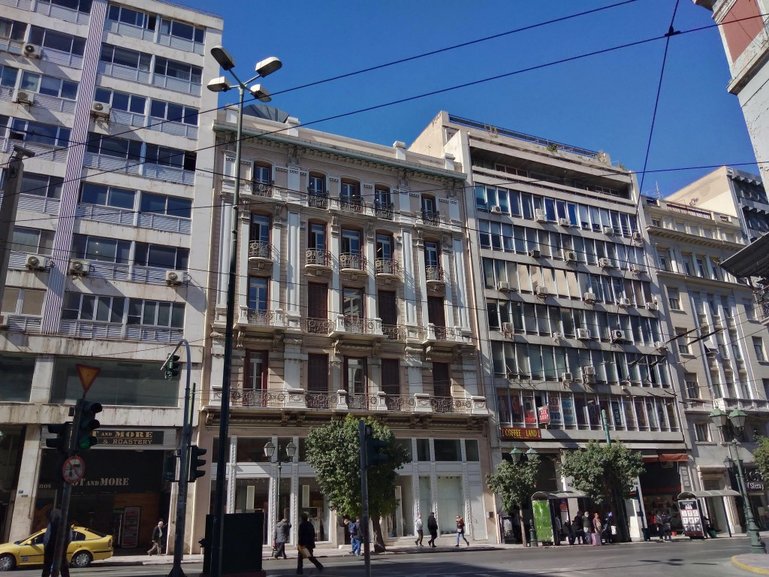 The part of Aiolou near Omonoia square is known as Chaftia, because during the 19th century the famous kafeneio (cafe) of Giannis Chaftas was located at corner of Panepistimiou and Aiolou street. At the same spot, the brothers Loumidis established in 1920 their coffee shop in, which roasted its own coffee and introduced Brazilian coffee to Athenians. The coffee shop still stands at the same corner and offers Athenians quality coffee. A few meters down the street and after crossing Stadiou you meet on your right hand the Notos Department Store. This store, named Lambropoulos until 2001, is the oldest surviving department store in the city with a history that starts back in 1901. 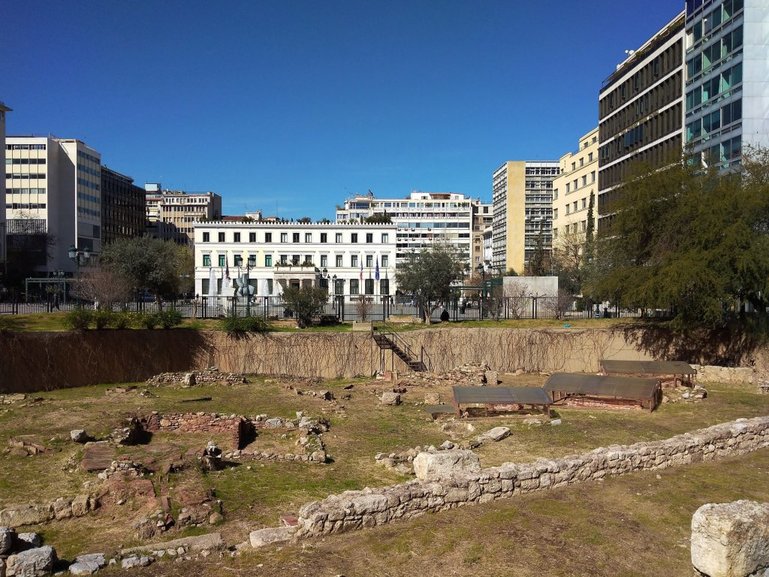 After Notos Store you come across Kotzia Square where two important neoclassical buildings are located. The one is the historical main building of the National Bank of Greece on Aiolou and at the other side of the square, on Athinas street, the Athens' Town Hall. Also in the square, you see the archaeological site of Aharnean Road, which was the main road leading outside the Ancient Athens' city walls to the northern counties of Attiki. The road was starting from Aharnean Gates, which were discovered during the construction of the new headquarters of National bank a few meters down the road.

Our next stop is Krinos, the pastry shop that was established in 1923 and was the first major patisserie in Athens with a sitting hall. It became famous for its “loukoumades”, a greek variation of the donuts served with honey or hot chocolate. The recipe and the taste are the same after all these years and the interior is preserved in its original form. Through the years, Krinos has become also well known for its “bougatsa” (pastry consisting of either semolina custard or cheese filling between layers of phyllo) and serves one of the best soft ice creams in the city.

A few more steps down the road the next point of interest is the church of Panagia Chrysospiliotissa. In the yard, you see a smaller church which was the first establishment built in 1705 and destroyed during the siege of the Acropolis by the Turks in 1826. In 1846 the residents of the area bought the nearby building plots and made efforts to find the necessary funds in order to build a larger one. Its construction was finally completed in 1892. The main icon of Panagia (Virgin Mary) is a replica of the one in the Monastery of Mega Spileo at Kalavryta. The part of the street after the church has been always known for its fabric shops, some of them still exist after decades of continuous operation. Also here you have two excellent choices for eating. The first one is Falafellas (Aiolou 51) with excellent falafel and the other Mama Roux (Aiolou 48) a very good all-day restaurant and one of the places that took part in the regeneration of the area the previous decade. 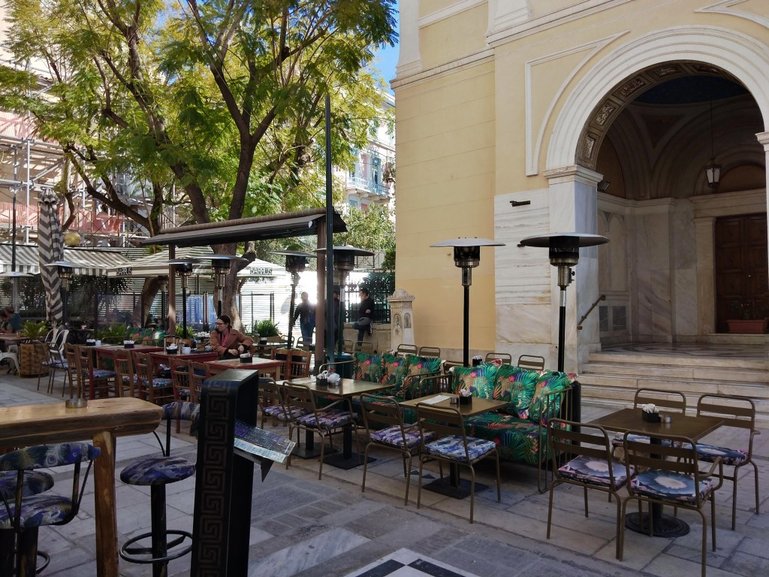 The next stop, Agias Eirinis Square, is one you cannot miss. The lively square around the church of the same name is a busy hub all day long. Many cafes, bars, restaurants and all kinds of eateries make the square and the nearby streets the epicenter of nightlife in downtown Athens. Our three favourite places on the square are Souvlaki Kostas (Agias Eirinis 2), one of the oldest surviving souvlatzivika in Athens (since 1946) with a limited variety of choices but excellent taste. School Pizza Bar (Agias Eirinis 8), probably the most popular pizzeria in the city center, offering tasty Italian pizza with an American touch. Pax Burgers (Aiolou 34) is a new arrival in downtown Athens that has taken Athenians by surprise, after a successful career in Thessaloniki. This is a self-service restaurant with burgers not very big but extra tasty and juicy. 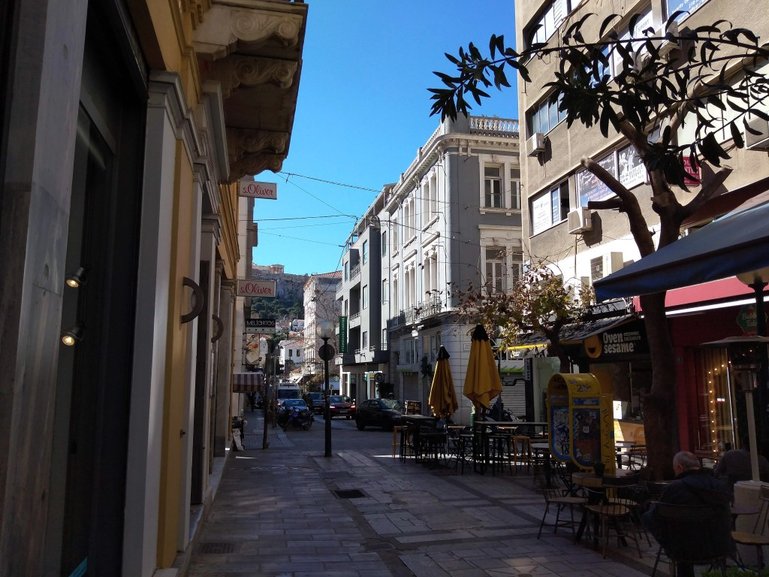 The next part of the street is where it meets Ermou street and Monastiraki. The most historic cafe of the city was located at the corner of Ermou, the notorious Kafeneio Oraia Ellas. It was the centre of many political fermentations and mergers from 1821 until 1879 when it closed permanently. After Ermou street at the far end of Dimopratiriou Square you could taste the most famous kebab in the city. Thanasis (Mitropoleos 69) is the restaurant that learnt the citizens of this city to eat kebab. From the day it opened in 1964, the quality has been the same. One of my childhood memories is the times when I came here with my grandmother and waited in the usually long queue to taste this “exotic” treat. You can either have a takeaway wrapped in pita kebab or you can sit and enjoy a whole plate of kebabs.

The last part of Aiolou crosses Plaka. It passes behind the Roman Hadrian's Library and ends up at the Roman market where one of the most iconic ancient monuments of Athens, Aerides, is located. Aerides (Tower of the Winds) or the Horologion of Andronikos Kyrrhestes is an octagonal marble clocktower that functioned as a timepiece and is considered the world's first meteorological station. In early Christian times, the building was used as the bell tower of a church and during Ottoman rule, it became a tekke (a place of spiritual retreat and character reformation for Muslims) and was used by whirling dervishes. Above Aerides, Acropolis is the ever-dominant shape of the Athenian skyline and eternal symbol of high art.

If you are visiting Athens Aiolou street should definitely be on your bucket list. If you are an Athenian, a stroll down Aiolou will be a reason to love again and rediscover your city.