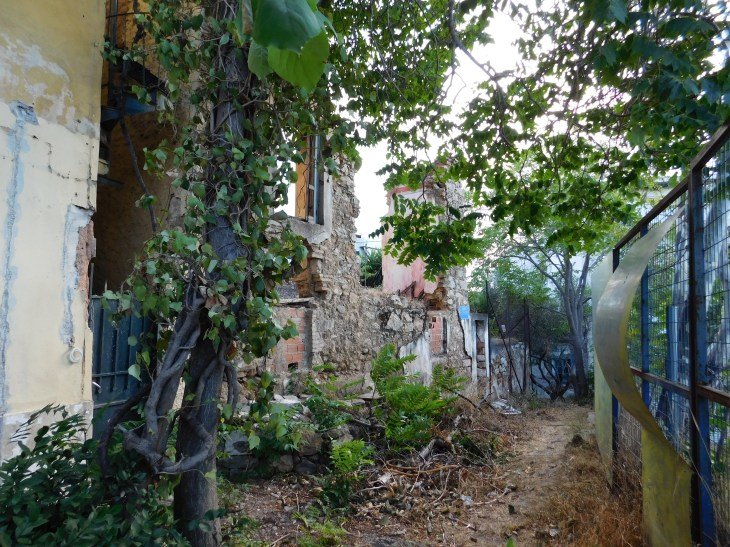 Athens is a popular tourist destination with many important sights of universal significance. In this article, we are presenting 7 sights that are relatively unknown to the public and remain almost secret, although they are inextricably linked to the history of the city.

In the neighbourhood of Mets on Ardittou Street and just a few hundred meters from Panathenaic Stadium, are the ruins of one of the most important ancient Athenian temples. It was a pavilion of Ionian style, built in 448 BC, probably by Kallikrates. It is mentioned by Plato and Pausanias, and according to Plutarch mystery rituals were performed in this area. The temple was also directly related to the victory of the Athenians in the Battle of Marathon: here were held annual sacrifices and celebrations in honor of the goddess Artemis, thus fulfilling the oath of the Athenians to thank her for their victory in the Battle. Today it is an archaeological site between buildings but no architectural elements have been preserved. However the mystery and the sanctity of the place were preserved in the city's tradition and it was believed that the half-ruined houses behind the Temple were places of strange phenomena such as the Shadow of the Old Lady who, completely silent, holding a lighted candle went up the road and got lost in the vegetation. The Shadow appeared whenever something bad was going to happen in the city. 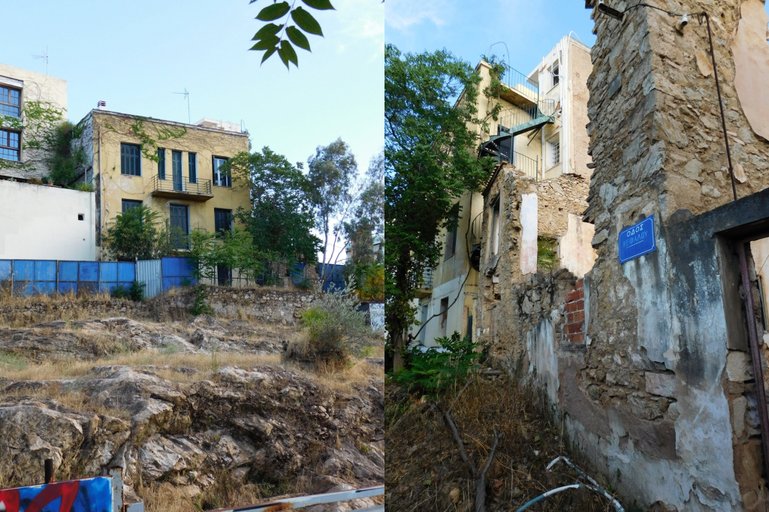 Temple of Artemis and the half-ruined houses 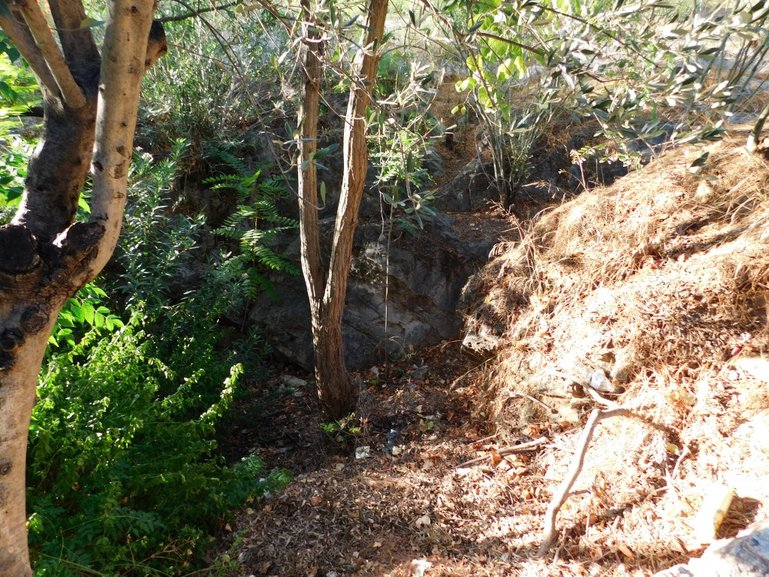 Vatrachonisi (meaning “Frog Island”) was an island in the river Ilissos in Athens, below Zappeion, in the area of Olympion, where Agia Fotini church is located today. It was a green flat strip of land between the two banks of river Ilissos. The two branches of the river, merged here into a small islet forming waterfalls on both sides. In ancient Athens, the holy spring of Kalliroi was located on the small island and the surrounding area was called Neraidotopos (meaning “home of fairies”). In the years of King Otto, the area originally gathered cafes, known as “cafe-sandan”, which hosted foreign cabaret artists and other similar shows and was the meeting place of illegal couples. Over time the cafes were replaced with establishments that were intended for the upper social classes. During a catastrophic flood at the end of 1896, one of two branches of the river was grounded and nowadays a small inactive part of an uncovered riverbed is preserved beside the church of Agia Fotini, and has been designated as an archeological site. Finally, in the years of King Otto a three-arched stone bridge was built over the river, which is now hidden under the intersection of Ardittou and Athanassiou Diakou streets. 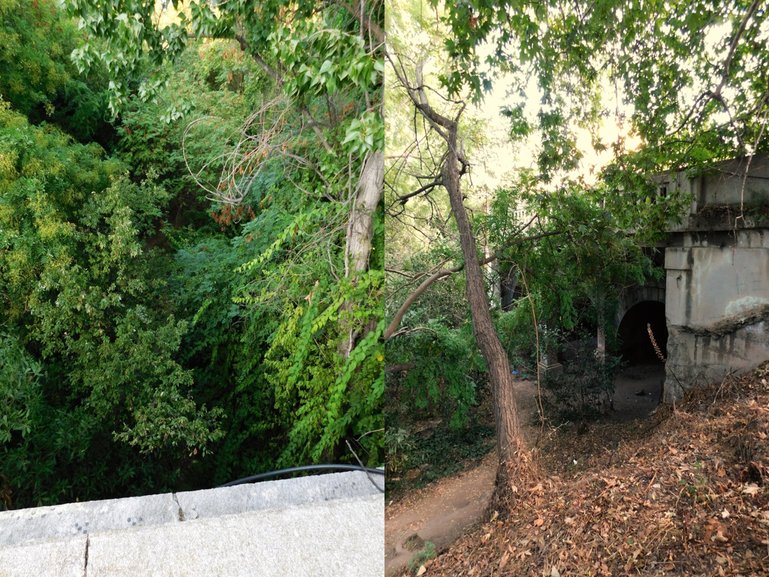 Ilissos riverbed and the stone bridge at Athanasiou Diakou street 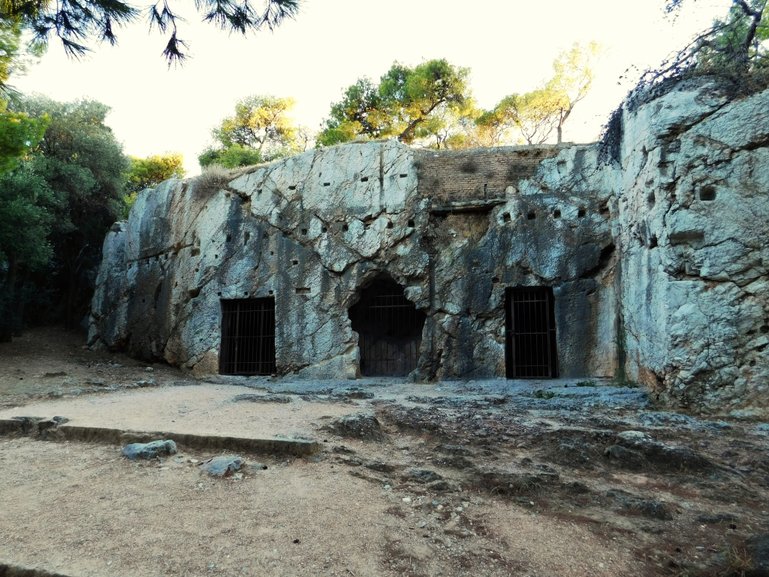 Just a few meters from Herodium in the foot of Phillopapos Hill a cave-like construction is considered by many archaeologists the place where Socrates was held prisoner before he was poisoned. Historical research shows that the archaeological site is difficult to identify with the prison of ancient Athens. However, there is some evidence to support this theory, such as the fact that it was built in the middle of the 5th century BC, overlooking a main road, was in a pit and had bath facilities, evidence that agrees with the descriptions of the prison in the Dialogues of Plato. Also among the objects discovered in the ruins of the building was a small worn statue of Socrates. The carved structure probably belonged to a rather imposing two-storey or three-storey building, which other scholars considered part of a house. During World War II the caves were covered with a concrete protective wall to be used as a crypt of antiquities of the National Archaeological Museum, which hid many of its exhibits to avoid being stolen by the Nazi occupation forces. Whether it is the prison of the famous philosopher or not, this is a very interesting site that is overlooked by the visitors to the neighbouring Acropolis and it is also relatively unknown to locals. 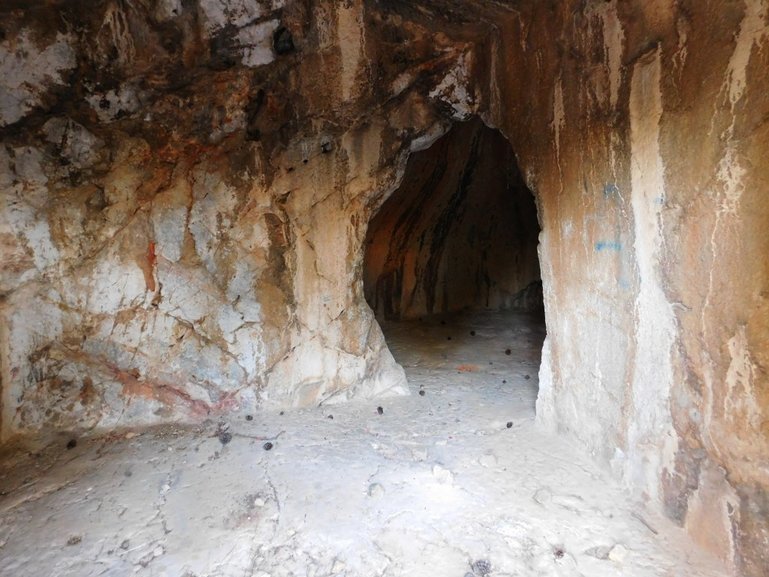 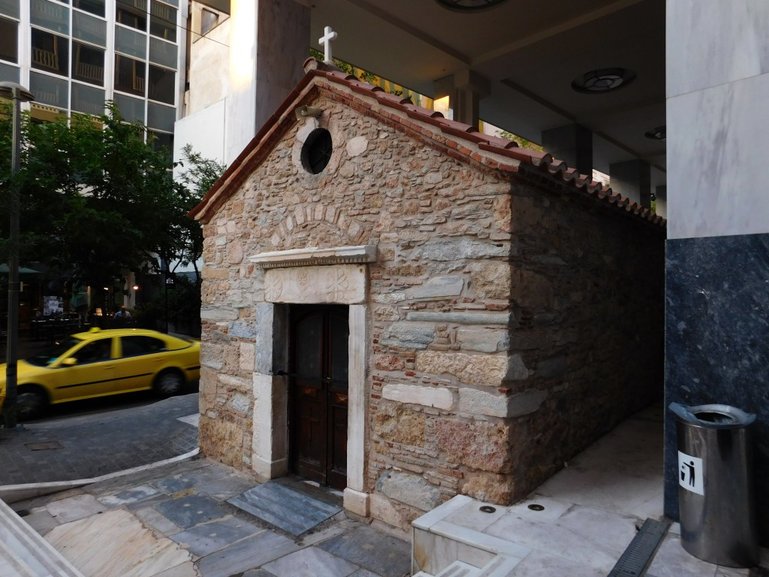 The small church of Agia Dynamis is located on Mitropoleos, one of the busiest streets in Athens, completely surrounded by the modern building of Electra Metropolis Hotel. The church was built in the 16th century over the ruins of an ancient temple of Hercules. The name Agia Dynamis (meaning "holy power") refers to the Virgin Mary as the protector of all pregnant Athenian women, who would give birth to strong children. In this way, the power of Hercules was Christianized and became the power of Virgin Mary. Under the floor of the sanctuary, there is a large underground cave approximately 15 meters long, which continues to a tunnel. the legend says that the tunnel ends in Kessariani (at the foot of Mountain Hymettus). According to tradition, during the years of Ottoman rule, it was in this cave that the priests had hidden ecclesiastical treasures and during the Greek Revolution of 1821, this tunnel was used to carry ammunition and necessities to re-enforce the Greek patriots all over Athens and Attica. The church was surrounded by several other buildings that were demolished at the end of the 19th century so that Mitropoleos Street could be widened to serve the needs of the new city. In 1963, a bell tower was built over the passage to the cave prohibiting access to it. 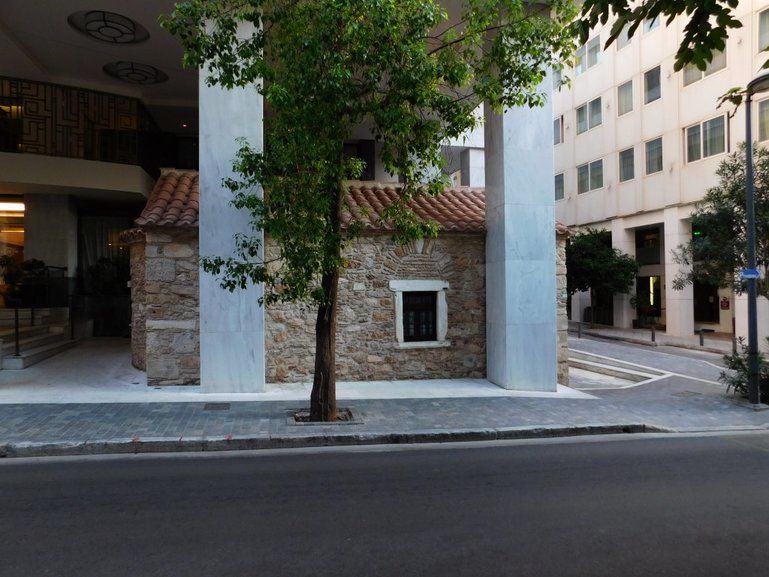 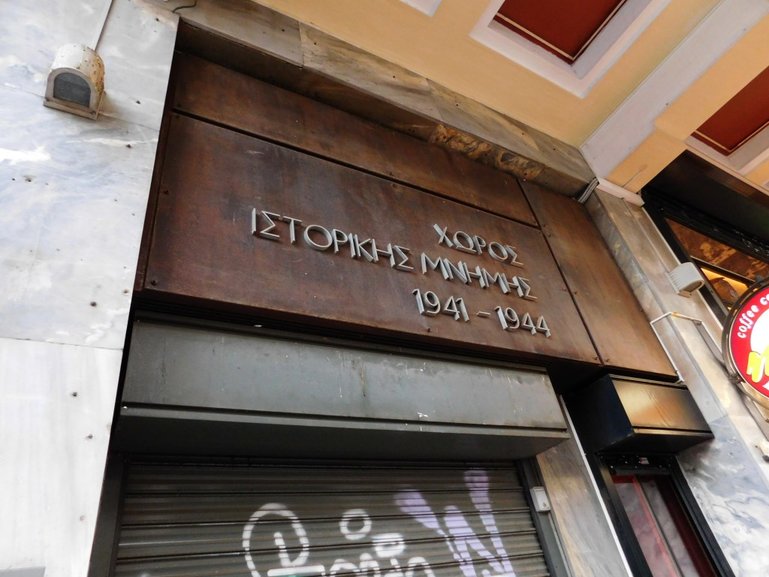 If you happen to cross Korai Street, it is possible to notice the characteristic sign that says "Xώρος Ιστορικής Μνήμης 1941-1944" (Memorial Sight 1941-1944). During the Nazi occupation, on Korai Street was the German Guard with the various services of the occupation troops and the Kommandatour at 4 Korai Street, a place where thousands of Greek resistance fighters were tortured, as well as several German dissidents. The cells were located in the basements, which had been constructed as an anti-aircraft shelter. The Nazis left no records and the story of the place has been composed through the surviving inscriptions, names written on the walls, small objects, personal notes, pages from German diaries and testimonies of people who were taken there. The Germans periodically painted the walls of the cells, so the engraved notes of the prisoners disappeared. It seems that when they lost the war and left in a hurry, they did not manage to do the same with the second basement and so the inscriptions on the walls, even of 1944, still exist. For more information about the sight (and visiting hours), which operates under the auspices of Ethniki Asfalistiki, the owner of the building, visit the official website. 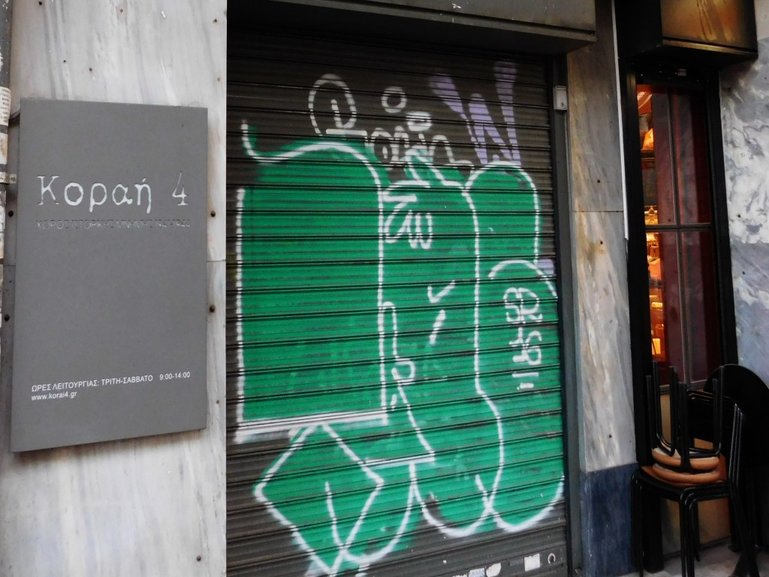 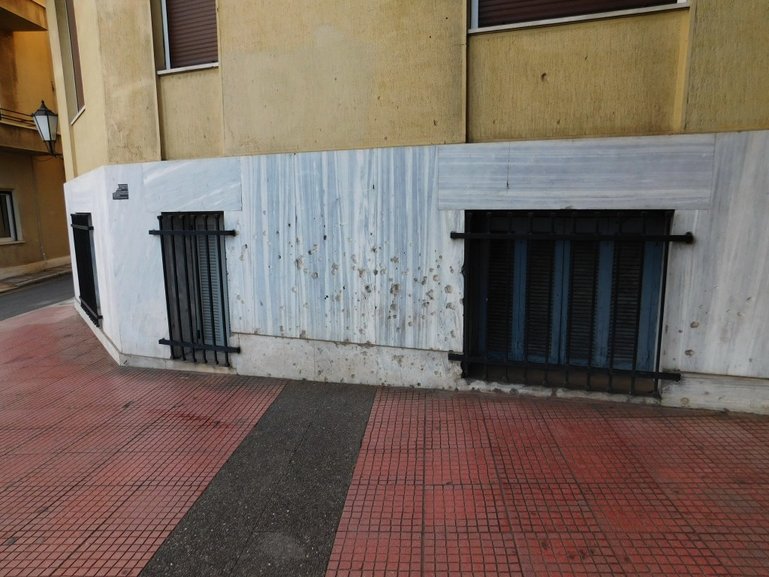 One of the darkest pages in the history of Athens is known as Dekemvriana and refers to a series of armed conflicts that took place from December 1944 to January 1945, between EAM-ELAS guerrilla forces and British and Greek Government forces. Their beginning, on December 3, 1944, was marked by shootings by police forces in front of the Monument of the Unknown Soldier against the demonstration of EAM, which was organized in response to the ultimatum of the government for national unity and disarmament of all guerrilla groups, resulting in the death of 33 protesters and the wounding of 148 others. The fighting lasted 33 days and was the only case in which armed conflicts of this magnitude took place in the capital since the creation of the independent Greek state in 1830. The main battlefield was located around the area of Makriyianni at the beginning of Dionisiou Aeropagitou Street. On the walls of the building at 42 Amalias Avenue, just opposite Andrianos Gate, bullet marks are visible to this day as a reminder of these sad events. Thousands of Athenians pass by the building every day, but very few have noticed this monument of our city's modern history. 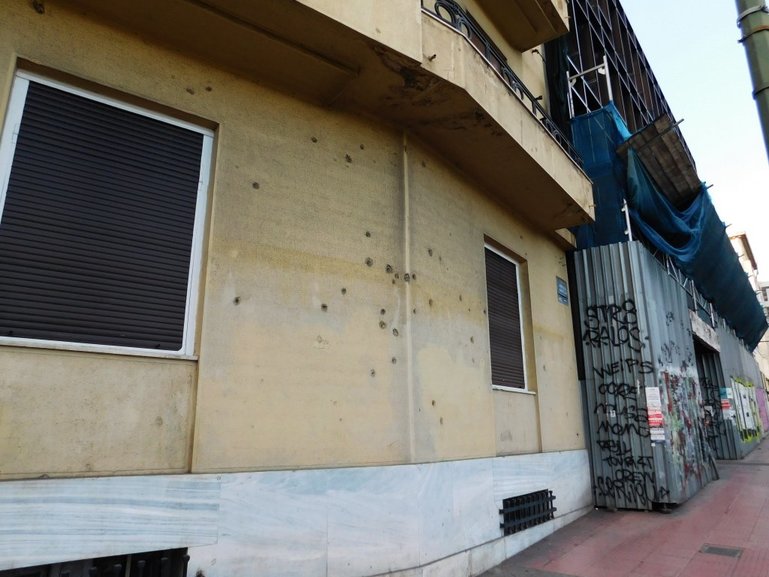 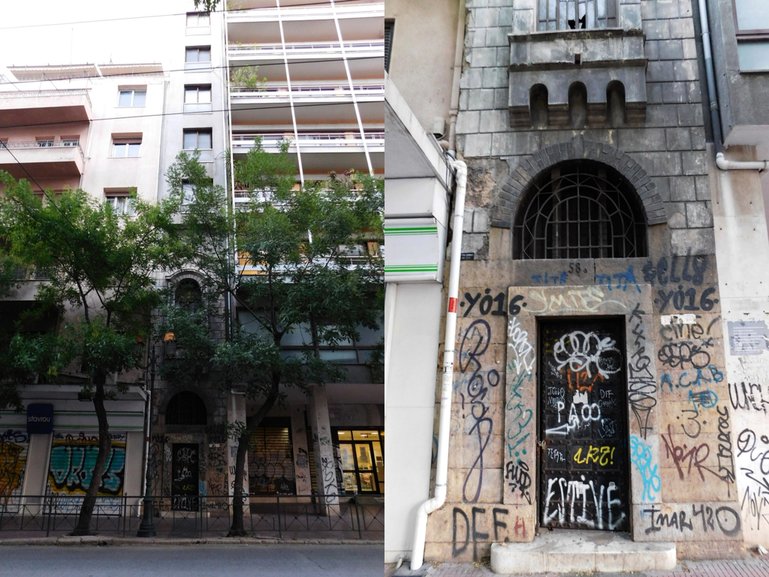 This enigmatic building is located at 58A Akadimias Street and is an extension of the neoclassical mansion, at 6 Mavromichali Street, which was built in the period 1882-85 as the home of Ernest Ziller. Ziller was a German architect from Saxony, active in Vienna and Greece during the 19th and 20th centuries. He was one of the most important and famous architects in Greece. Ziller lived in this mansion until 1912, after which it was bought at auction by the banker and art collector Dionysios Loverdos as his residence. There is a lot of speculation about what exactly this building represented. Rumors peak if it is related to occult events, as its religious mysticism raises dozens of questions. The main features of the building are its large gothic door, as well as the vaulted domes in the so-called temple that existed inside. Many researchers and mystery lovers talk about underground passages and galleries since inside the building there are sealed hatches, secrets doors and strange symbols. But the strangest element, which was the trademark of the building and perhaps the starting point of the whole mystery, was the imposing dragon that adorned the entrance of the house, which unfortunately was removed, after rumors and TV shows that presented the building as temple of satanic ceremonies. Today, after years of destruction, the building has begun to be renovated in order to become a branch of the Byzantine and Christian Museum and open for the public for the first time.

All the above attractions are part of Athens' history, and discovering them will make any visit to Athens unique and exceptional. But it is a joy for the Athenians as well to rediscover their city and learn something new and extraordinary. 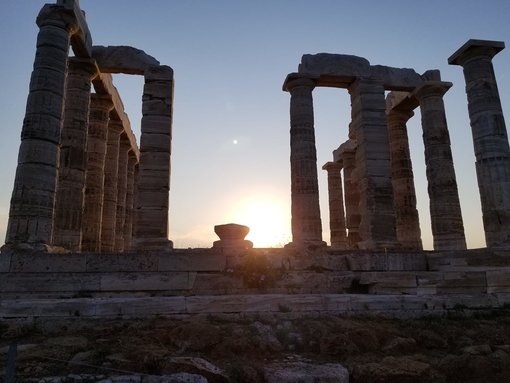