Hangzhou is a large city and forms the capital of China's Zhejiang province. It occupies 16,596 square km - which could even make it a relatively small-sized country (Slovenia in Europe is, for example, not much bigger with its 20,271 square km). The mega-city's core area is, luckily, much smaller and distinguishable with its 4,876 square km size, where most of the great attractions and historical sites are squeezed into. Besides Hangzhou's famous West Lake (西湖) and Leifeng Pagoda (雷峰塔), the most famous landmark is definitely the Chenghuang or City God Pavilion (城隍閣), which is located on the north-northeastern section of Wushan (吴山, meaning Wu Hill). Because of the famous pavilion and temple complex, Wu Hill is also known as Chenghuang Hill. 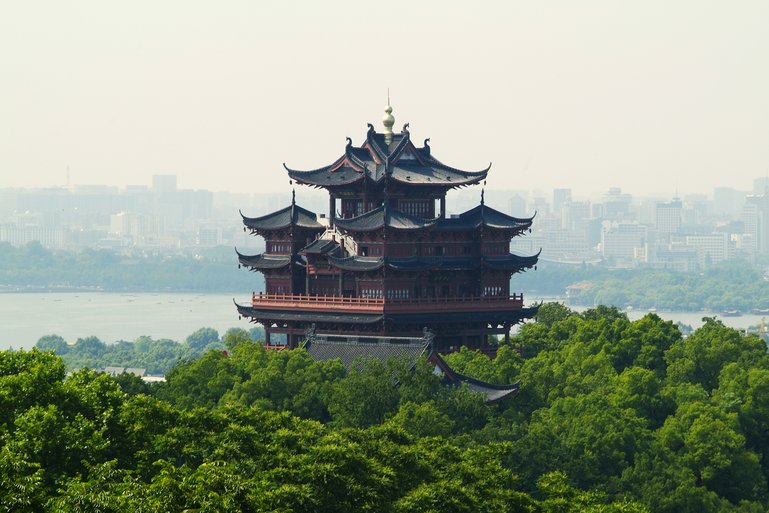 Chenghuang Pavilion (城隍閣) is one of the most famous attractions of Hangzhou which is also the landmark of the so-called Grand View of Wu Hill (吴山大观). It was only built in the late 1990s and has been open as an attraction since around 2000. It is an impressive seven-floor pavilion together with the underground that makes the total height of 41.6 meters. It was built on the remains of the Chenghuang Temple. Traditionally in ancient times, citizens would choose patron saints from local administrators and heroes who had made significant contribution to the locals' well-being and the development of their living environment, and then built temples to worship these saints. The original Chenghuang Temple, therefore, was built in the honour of Zhou Xin (also known as the City God), who was a *Judicial Commissioner of Zhejian*g between 1403 and 1424 and for all the good he did for the people of Hangzhou, he is now worshipped here. The renovated temple is located right next to the pavilion. The site is very convenient for visitors as it literally lies in the 'city centre'. The entire Wushan Scenic Area has a central location in Hangzhou and situated near two very famous tourist attractions, West Lake and Hefang street. The entrance fee to Chenghuang Pavilion is 30 RMB as of June 2020, although there is more to explore besides a fantastic 360-degree view as the pavilion offers to its visitors a huge exhibition, a tea house and restaurant, and a beautiful garden with flowers, birds and brand new sculptures. 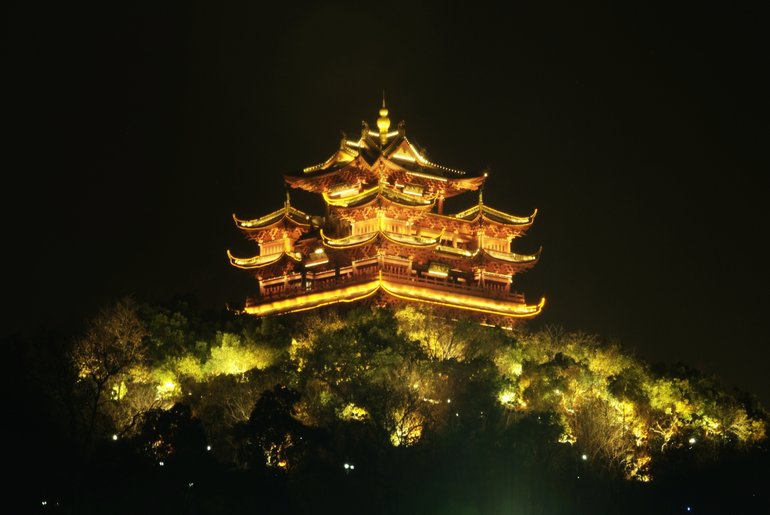 Chenghuang Pavilion in its night glow 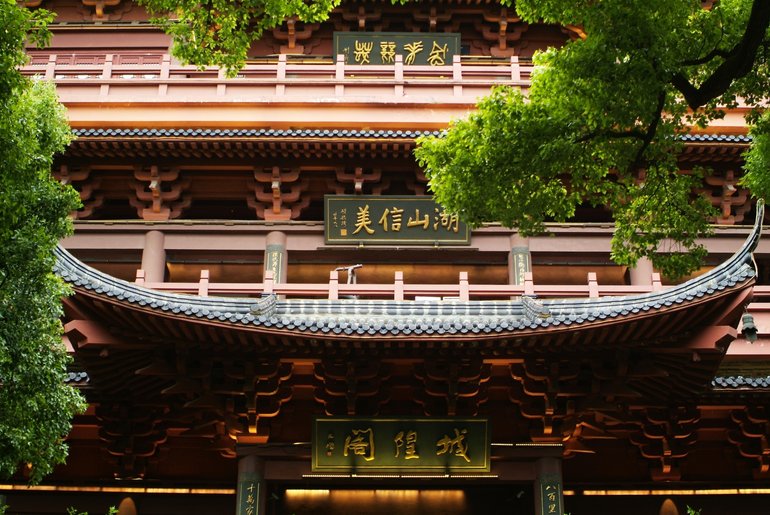 The front façade of Chenghuang Pavilion 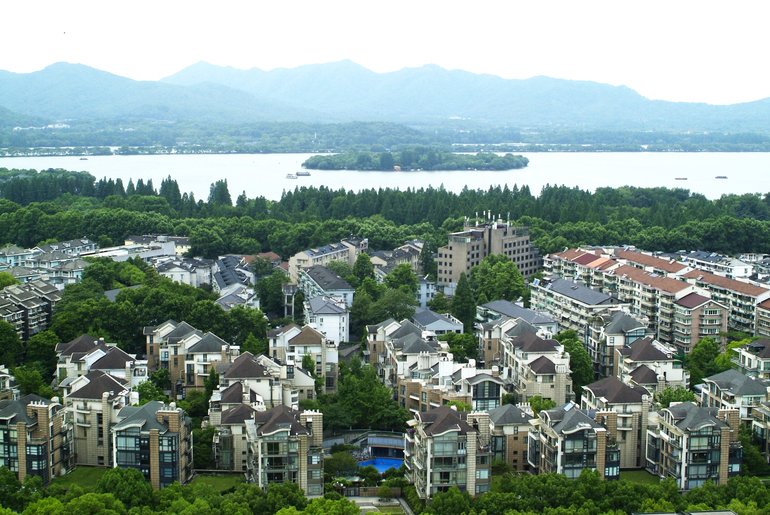 The view over West Lake from Chenghuang Pavilion 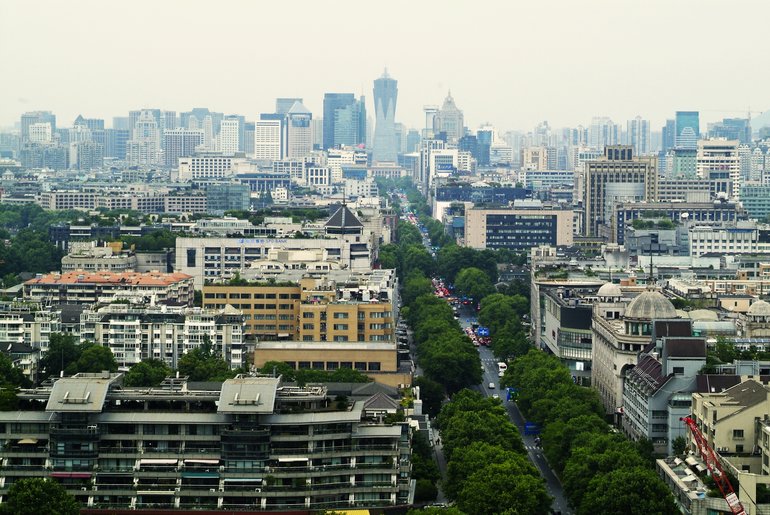 The view over Hangzhou's central district from Chenghuang Pavilion

Wushan is famous for visitors because of the Chenghuang Pavilion that can be seen from afar. But the 'Scenic Area' has a larger side at the south-southwest where tourists do not seem to wander further. The other side is mostly a beautiful forest with many paths across it, but there is also another, a smaller pavilion from where the view over West Lake and the city is just magnificent. It is called Lake and River-view Pavilion and it is situated on the so-called Wushan First Peak (吴山第一峰) - which is the highest peak of Wushan. Its name possibly comes from the time when it was still possible to see River Qiantang (钱塘江) in the distance. But now, the trees have overgrown the southern end of the peak and also, urbanisation has brought many large buildings in the area that block the view from the river. Still, it is a beautiful spot that gives a fantastic view over Hangzhou city centre (including Chenghuang Pavilion) and West Lake, and it is free of charge. The southern part of Wushan is also known as Ziyang Hill (紫阳山), which is technically still part of the larger Wushan, but it may also refer to a peak or an area near the 'First Peak'. There is also a group of strange rocks here, which are commonly known as Wushan Twelve Peaks. People named them after their shapes, although the rocks resembles animals in the zodiac, so they are also called as Twelve Zodiac Stones. 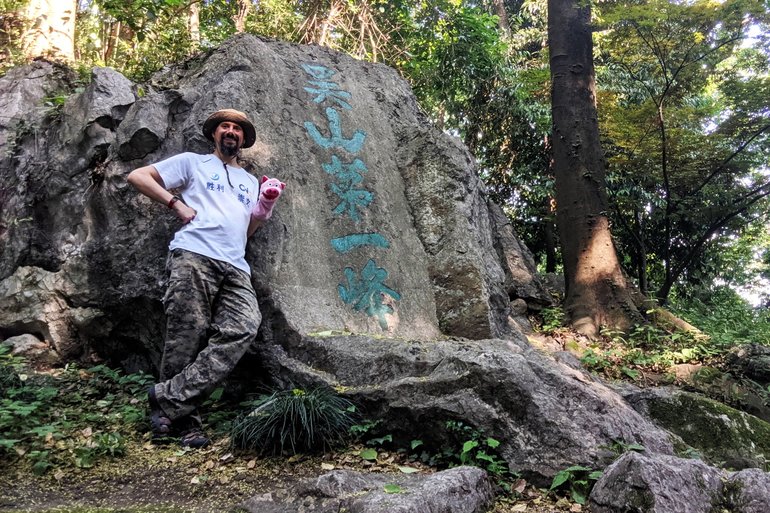 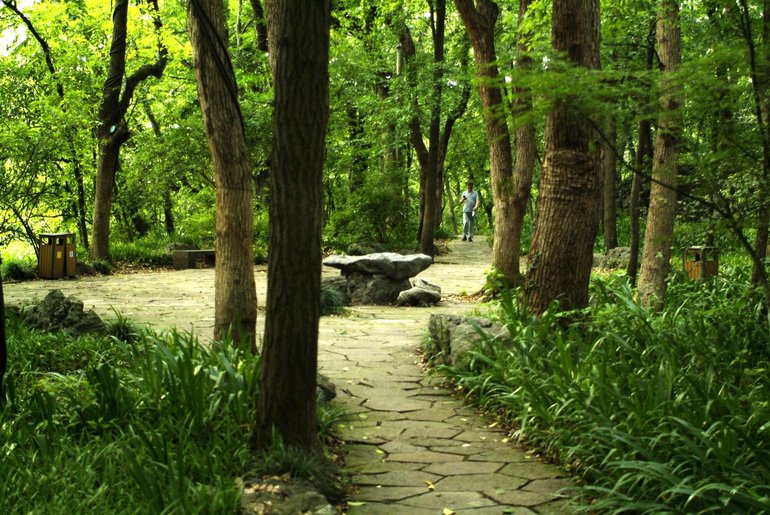 A park area on Wushan, near the pavilion 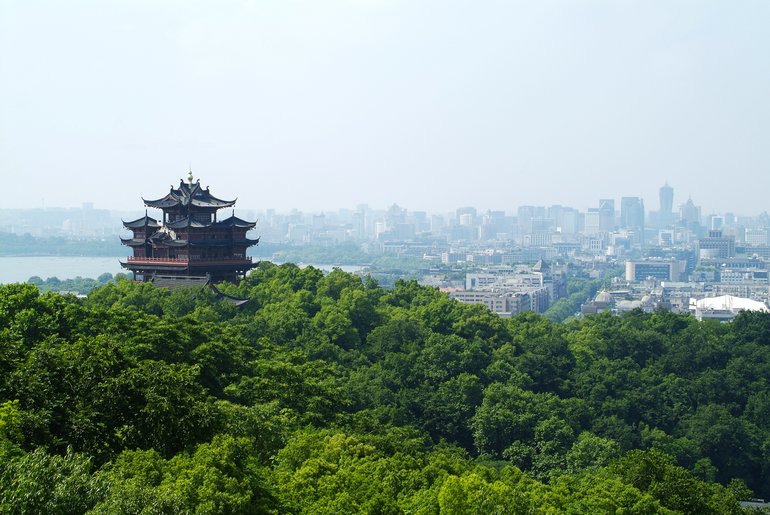 View over West Lake, Hangzhou city centre, and the Chenghuang Pavilion from the Lake and River-view Pavilion 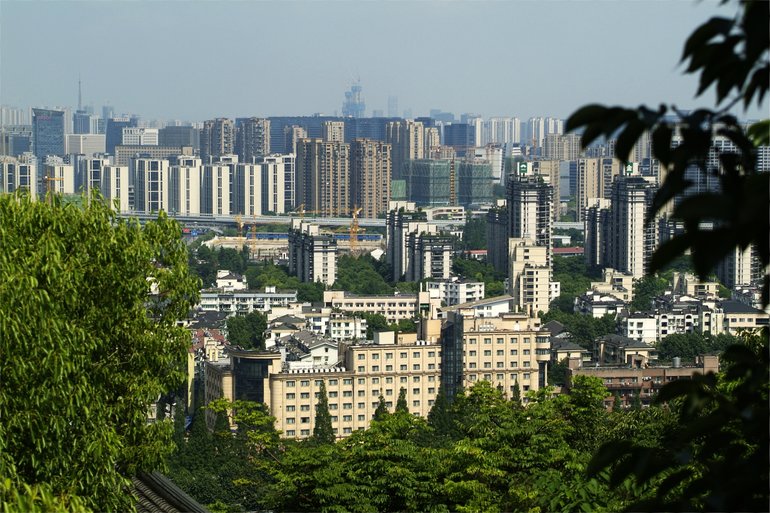 Besides the beautiful forest and the outlook pavilion, the southern part also gives you the Zhejiang Memorial Hall of Revolutionary Martyrs (浙江革命烈士紀念館), which is a large open space with a huge column-like monument on the top of it, and an exhibition centre. This memorial hall is meant to be located on Ziyang Hill (紫阳山), so in this case it truly refers to a peak. The area, of course, gives you more as there are also sculptures of martyrs carved in red sandstone and bronze, and a beautiful, green park with beautiful forest paths. If you keep your eyes open, you will find many more interesting things here. 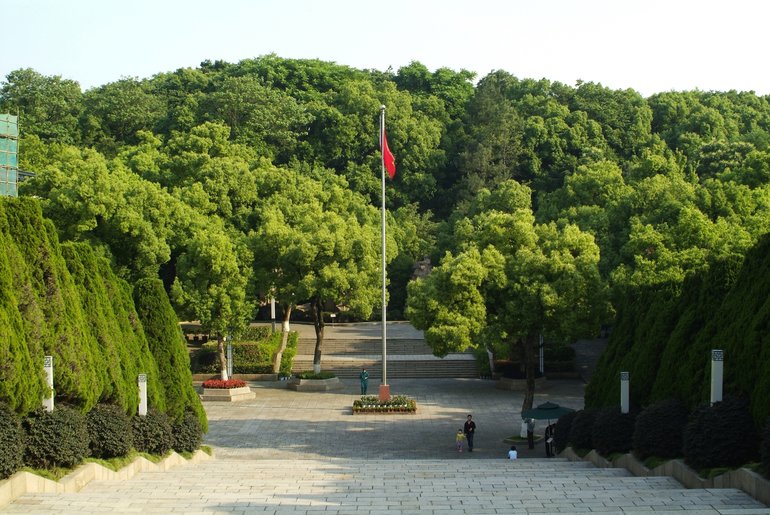 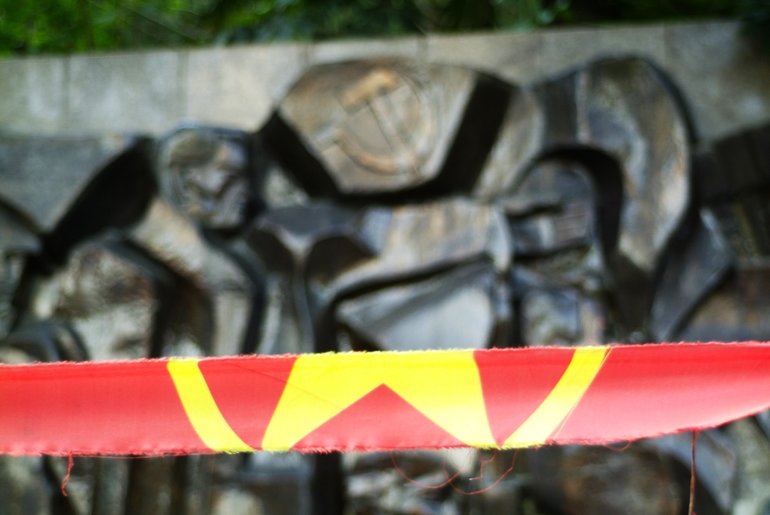 Sculptures made out of bronze 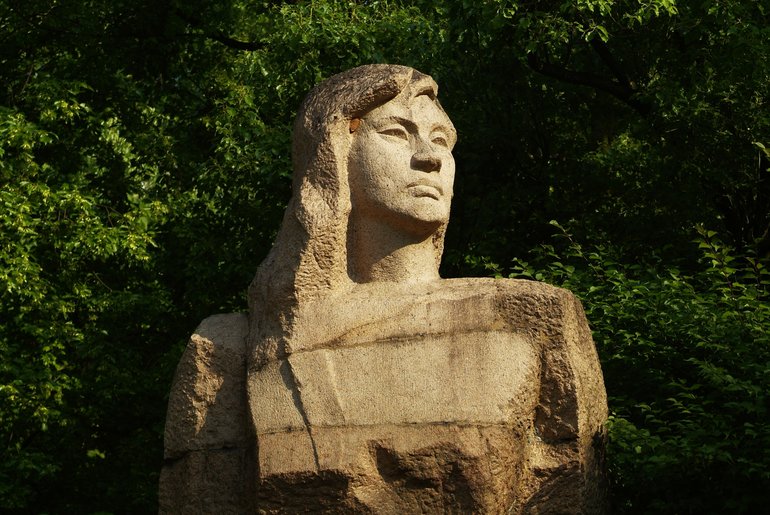 A sculpture made out of red sandstone 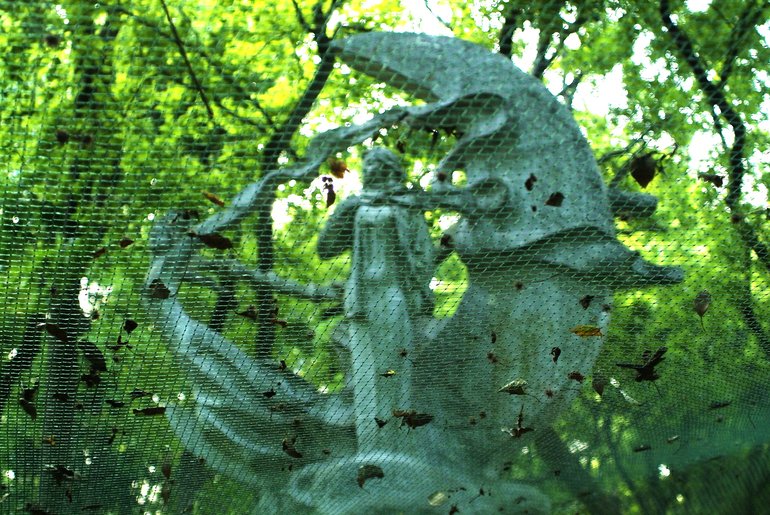 Wushan park area near the memorial

There is also a tiny cave called Qingyi (青衣洞), which is situated right next to the site of Chongyang Temple (重阳庙). The spring inside the cave is named after the cave. Legend has it that during the Tang Dynasty, a Taoist monk saw a kid in grey clothes on go into the cave and then disappear without a trace. What was left was only the noise of wind and rain coming from inside the cave, so that is how the cave got its present name (qingyi means grey clothes). The site beside the Qingyi Cave has been occupied since the 9th century, which was been developed into a Taoist temple and monastery during the upcoming centuries. In 1861, the temple was destroyed in a war, and in 1880 was rebuilt as a memorial temple. This is what can be seen today. 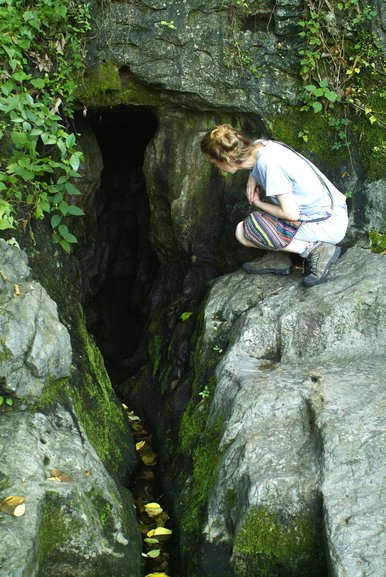 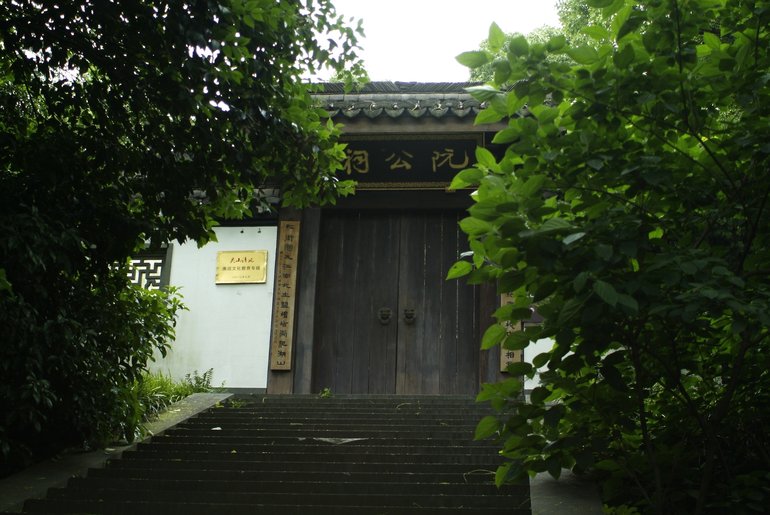 The entrance to Chongyang Temple 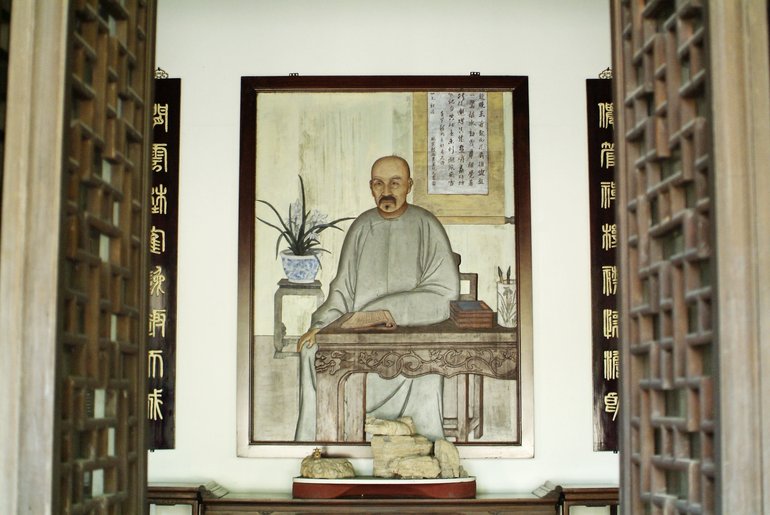 A beautiful carving on the front façade of Chongyang Temple 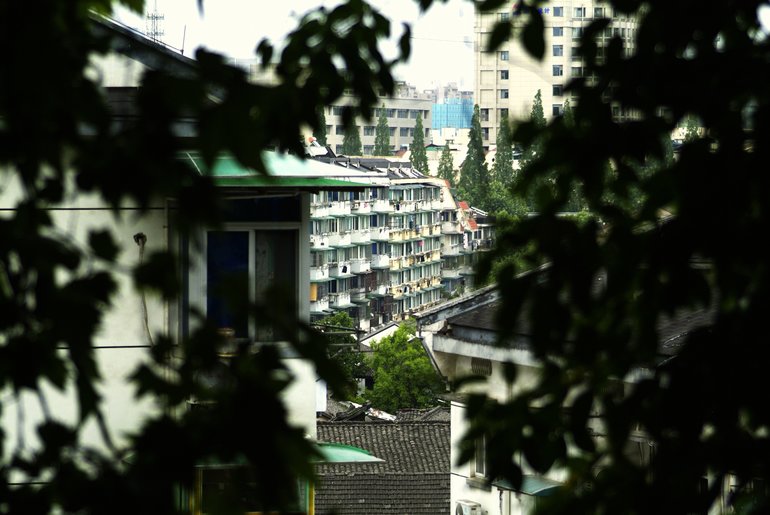 The view from Chongyang Temple

Wushan is definitely more than just the Chenghuang Pavilion, so if you visit this attraction in Hangzhou, bravely go further as the entire Scenic Area is worth the time and effort. 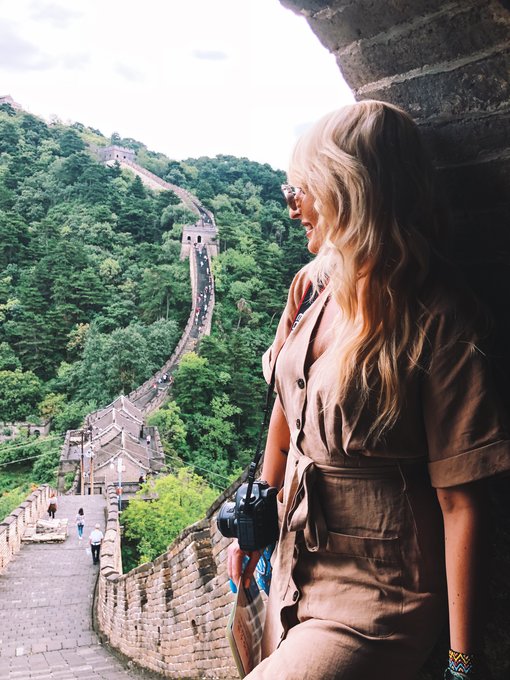 My Favorite 4 Places in Beijing