Old Town of Xanthi – The Little Paris of Northern Greece 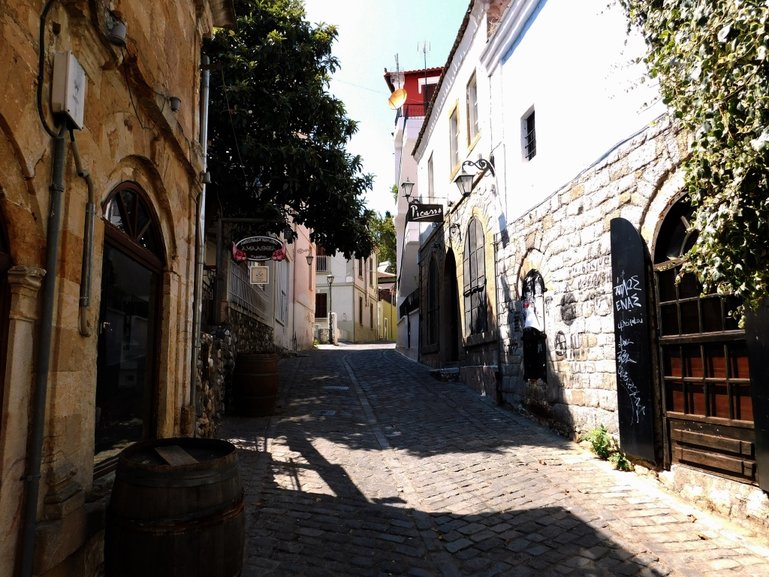 The Old Town of Xanthi (Η Παλιά Πόλη της Ξάνθης) is one of the largest urban traditional settlements in Greece, which has remained unaffected by time and preserves its nobility, grace, cultural importance and historical value. It was characterized as a traditional protected settlement in 1978. It is located in the northern part of the modern city of Xanthi, forming its historic core and covering an area of 380 acres. 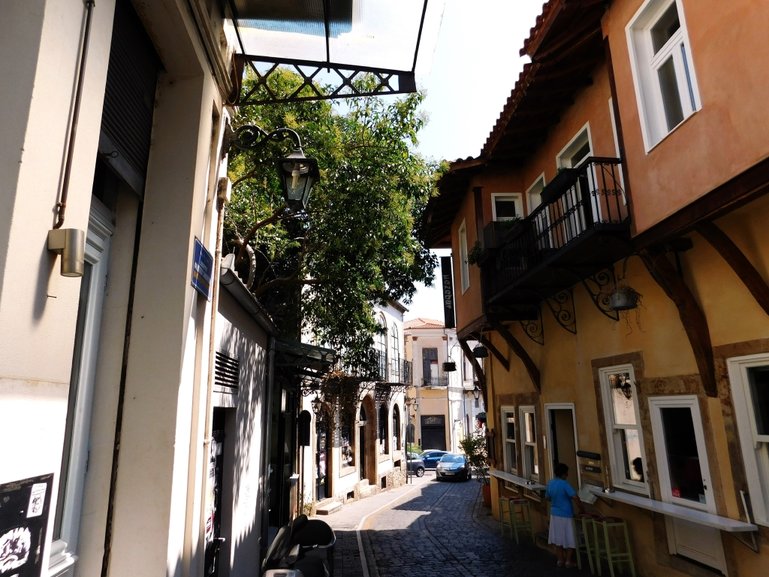 The development of the region began with the cultivation of tobacco in the 17th century, while in the next century Xanthi became known worldwide due to the excellent quality of its product. The climate and the suitable soil played a role in the cultivation of a variety of tobacco, called "basma" (μπασμά) with a special aroma and taste, which traveled to every corner of Europe and the court of the Ottoman sultan. That successful cultivation of tobacco made the city flourish in the 18th and 19th centuries. It was then called "Little Paris", a name that is often used in various cities of Greece in order to attribute their economic growth and cultural development during a specific period. The economic prosperity of the city was stopped by the Greek revolution, during which many Xanthi residents were arrested and imprisoned and the two consecutive earthquakes in 1829 (March and April) that destroyed the town and the villages of the area. 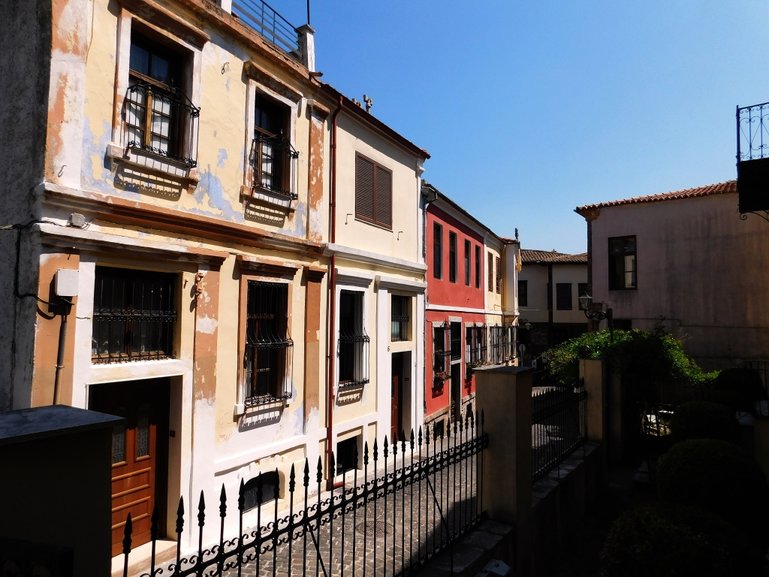 The first phase of construction of today's Old Town is estimated to have taken place between 1830-1845 with builders from Western Macedonia and Epirus. Ιn 1859 a sultan's firman (φιρμάνι) enabled a ruling class of Christians, Jews and Armenians to be commercially active in the area and to become the main inhabitants of the city. Around 1870 Xanthi was the capital of the region and reached its biggest residential acme with the dominant style of belle epoque. During this period the town had tobacco stores, four consulates, insurance companies, Turkish baths, guest houses, two theaters, and, of course, many tobacco factories. However, after the Bulgarian occupation of the period 1914 - 1919, the city was financially destroyed. The production and trading of tobacco gradually declined and finally after World War II almost vanished. 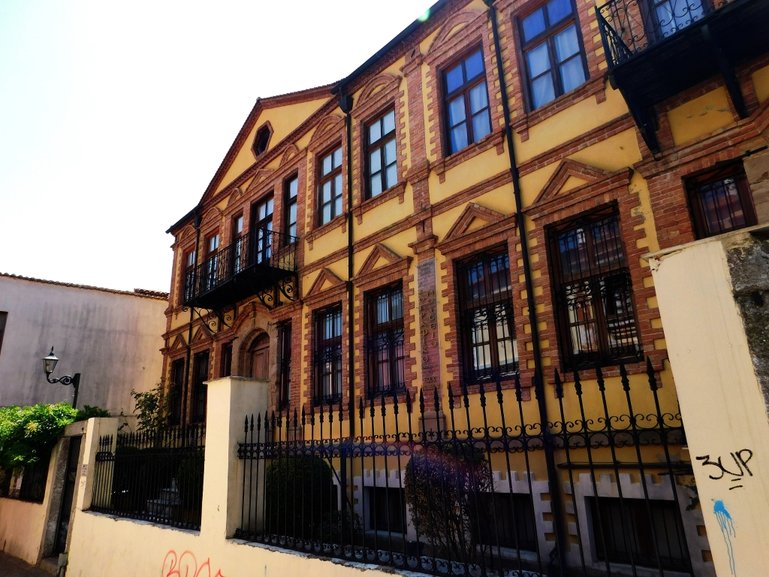 The signs of the golden age are still visible in the cobbled alleys and the impressive mansions of the rich tobacco merchants. The colorful houses have painted walls, windows with railings, gables, entablatures and small gardens. Although, as we have mentioned, they were built by Greek craftsmen, they also have many foreign influences - from the Italian Renaissance, German Romanticism and Greek Neoclassicism. European influences were most pronounced in the interiors of houses with heavy furniture, murals, stained glass and carved doors. All these elements were combined also with eastern influences, like "sachnisia" (σαχνισιά), which are ledges supported by wooden beams located beyond the boundaries of the ground floor masonry. This architecture is observed in traditional buildings of Balkan, Asia Minor but also of European architecture (in Europe the term used for these ledges is "erker").

Folk and History Museum of Xanthi

The best way to get a glimpse of the everyday life in Xanthi during its golden age is a visit to the very interesting Folk and History Museum of Xanthi (Λαογραφικό & Ιστορικό Μουσείο Ξάνθης) on Antika Street. The museum was founded in 1975 and is housed in the Kougioumtzoglou Mansion. The museum's exhibits are evidence of the public, private, social, economic and religious life of the city and the countryside in the late 19th and early 20th centuries. The ground floor gives the visitors the chance to take a taste of the city's recent history and houses the exhibition “Xanthi 1860-1940, a period of acme”, which presents the life of the tobacco merchants. This exhibition continues at one of the building's wings on the first floor. One wing of the basement is devoted to the exhibition “Everyday life and holidays” that constitutes the agricultural and ranching life in Thrace. In the second wing of the basement is exhibited the “Entrepreneurship in Xanthi in the early 20th century - Businessmen - Working class”. 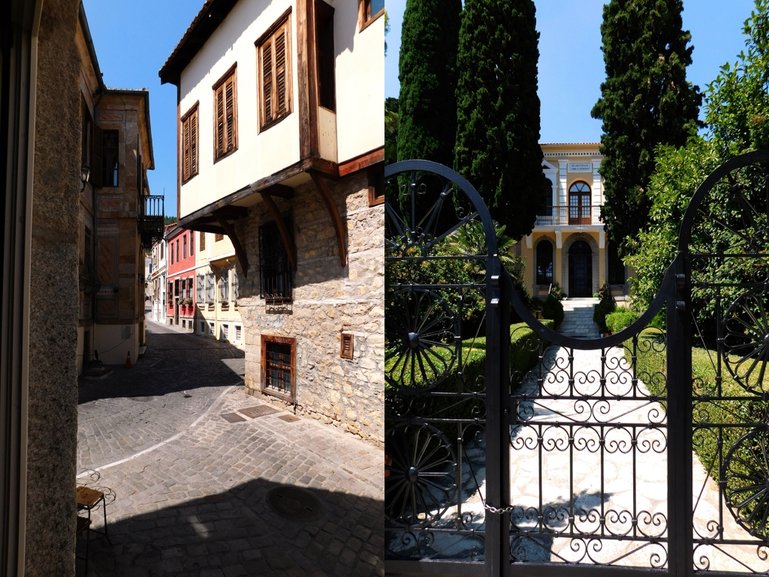 A walk, starting from the Old Clock at the central square of the modern city, is the best way to visit the Old Town. Follow Vasileos Konstantinou Street until Antika Square(Πλατεία Αντίκα) and turn right on the first street. At the intersection, with Mavromichali Street you can see the building of the City Hall (Δημαρχείο), which is housed in the mansion of a Jewish tobacco merchant and was built in 1830. Just next to the mansion is the surviving building of an old typical guesthouse built in 1870. From this point follow to the north Mavromichali street and turn right on Orfeos Street. At the intersection of Orpheus and Antika Street, you see two unique buildings - Kaloudis Mansion (1877) with the characteristic painted exterior and the building of the Municipal Art Gallery. From here turn left on Antika Street where the Folk and History Museum of Xanthi is located. 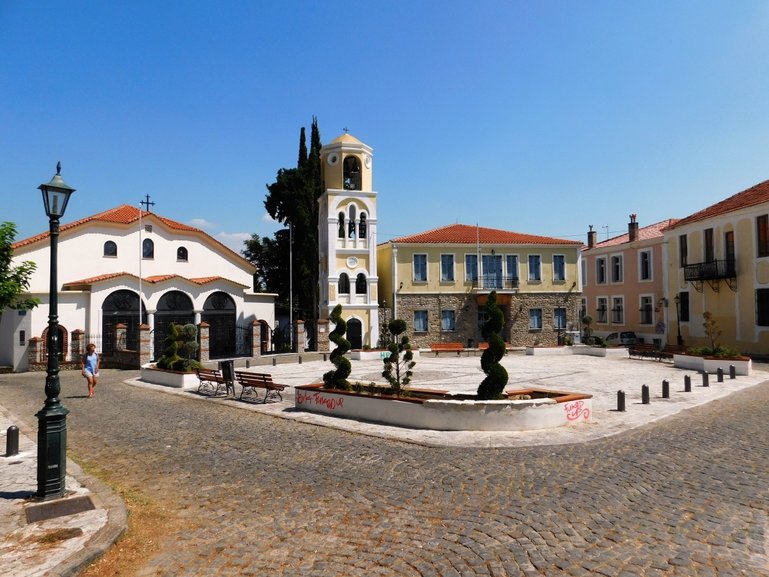 Continuing directly from the museum, you will easily reach Metropolis Square. The metropolitan church of Agios Georgios (Άγιος Γεώργιος) located here dates back to 1839 and is a three-aisled basilica. The three-storey bell tower that is located right next to it was built in 1924. Near the church, you also see the historic building of the first primary school of the city which was donated by the Greek merchant Stalios. From this point, you could get lost in the picturesque alleys and streets of the city without a plan and finally return to Antika Square. One last stop before leaving the neighbourhood should be the building of Grand Maison on Eleftheriou Street. The building was owned by Isaac Daniel, a Jew who was among the richest people of the time. His profession was a stockbroker and at the same time, he was engaged in the tobacco trade and brokerage.

Grand Maison is at the same time the house where the leading Greek composer, Manos Hadjidakis (23.10.1925 - 15.06.1994) was born and lived in his first years. His family lived in Xanthi because his father worked as a legal advisor for the flourishing tobacco companies in the early 20th century. The house where Hadjidakis spent his early childhood, built in the late 19th century with neoclassical elements and a bit of baroque, is now classified as a historical monument. His music education began here at the age of four and included piano lessons by Armenian-born pianist Anna Altunian. At the same time, he practiced the violin and the accordion. Thus, when he moved to Athens in 1932, the foundation for his music career had already been laid. 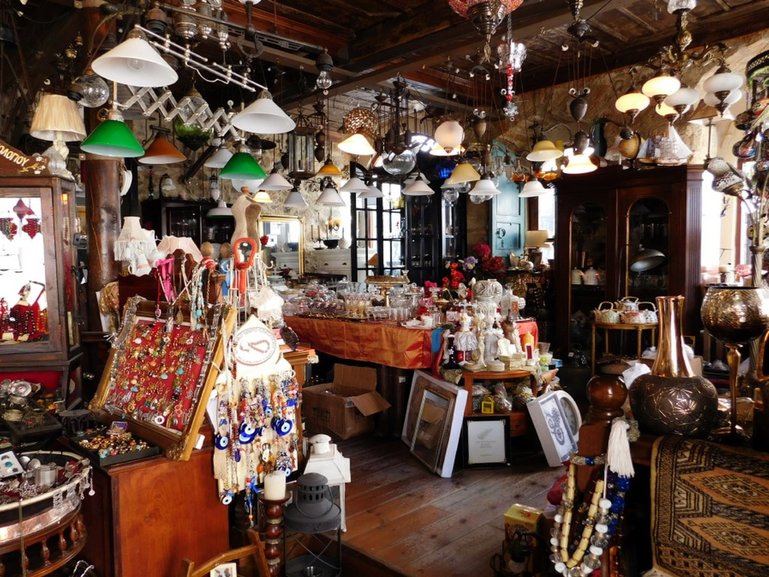 Walking through the streets of the Old Town, it is certain that a store will catch your eye, the unique Eleftheriadis Antique Shop (Παλαιοπωλείο Ελευθεριάδη). For more than half a century Eleftheriadis and his sons gather antiques of all kinds. Starting as a coppersmith, he collected bronze objects for many years. Today, handmade, authentic, old Thracian objects made of copper, metal, marble and wood, which once adorned the houses of the Old Town, fill the shop, opposite the City Hall building.

The Old Town of Xanthi is a unique destination and a must-visit if you are visiting Northern Greece. The cultural heritage of the city's golden age is still evident and a stroll through the streets of the Old Town is always a welcome journey back in time.

Kyparissi : The Unknown “Island” of Peloponnese

8 Stops On a Road Trip in Evros County

Located in a magnificent Mykonian house. Just 10 minute from the Town of Mykonos. As soon as we are home, we will start the barbeque. You will learn how to grill the skewers, chop the veggies, make the ultimate tzatziki and finally how to wrap it. Also, we will drink some traditional wine and Greek spirits such as Ouzo and Tsipouro