Back in time: Historical architecture and ruins in India 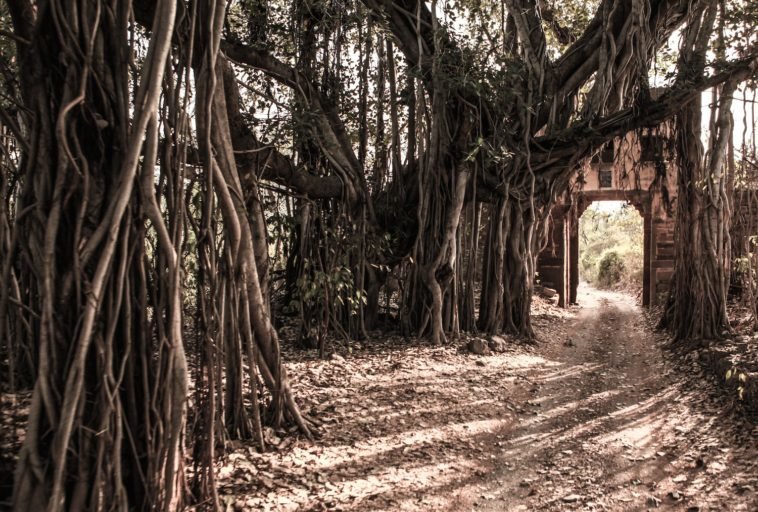 Testaments of different eras spanning centuries and millenniums are bestrewn on the Indian landscape, telling the stories of the times gone in carved temples, caves, and ancient ruins.

Some of these are as old as the origin of human lives and the magnetism of these majestic memorials pull thousands of travelers and explorers to India every year. While the Khajuraho group of temples, Ajanta and Ellora Caves, and ruins of Vijayanagara empire in Hampi are the most famous ones, there are many more historical artifacts that have emerged through the years in the life of India. Here are some of the lesser known archaeologically intensified destination from the treasure trove that India is.

Upon entering Bhimbetka caves, comes on the way a signboard saying “one of the earliest cradles of cognitive human evolution.” Like in a museum created and protected by the force of nature, the giant rock-cut shelters with their illumine paintings are perched under the umbrella of a verdure landscape of Satpura hills from the beginning of the Indian Stone Age.
A vast expanse tracing the life and times of these early humans, Bhimbetka in total is said to have around such 750 rock shelters. Only fifteen of them though are open for public viewing. At least some of the shelters were inhabited by Homo erectus over 100,000 years ago. Some of the Stone Age rock paintings found are some 30,000 years old. The caves also deliver early evidence of dance. They were declared a World Heritage Site in 2003. 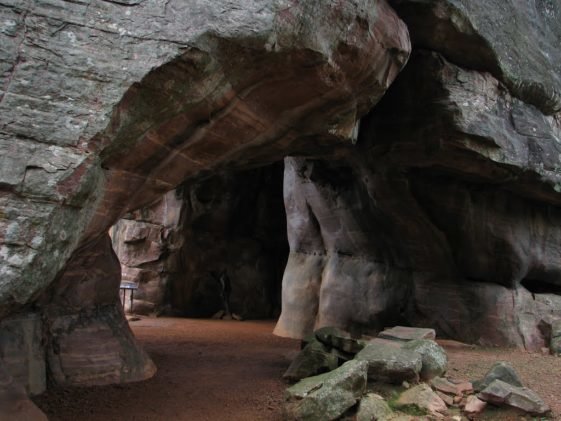 Bhimbetka in total is said to have around such 750 rock shelters. They were declared a World Heritage Site in 2003.

How to get there: Bhimbetka is best reached from Bhopal. Bhimbetka is 46 km from Bhopal on NH 69. Getting to Bhopal is relatively easy. Bhopal is connected with Delhi, Mumbai, Gwalior and Indore by flights. and trains.

Founded in the 5th century, Nalanda University was one of the greatest university that the world saw in the ancient era. At its zenith, the university had 2000 teachers, a vast library, and more than ten thousand students from countries as far as Japan, Sumatra, Korea, and Java. When Chinese scholar and traveller Xuanzang visited sometime between 685 and 762 AD, about 10,000 monks and students lived here, studying theology, astronomy, metaphysics, medicine and philosophy.
It’s said that Nalanda’s three libraries were so extensive they burnt for six months when foreign invaders sacked the university in 1193. Today, a notable tourist destination as a part of the Buddhist circuit in India, the red stone reminisces of the hub of knowledge and learning is still visited by thousands of Buddhist scholars. 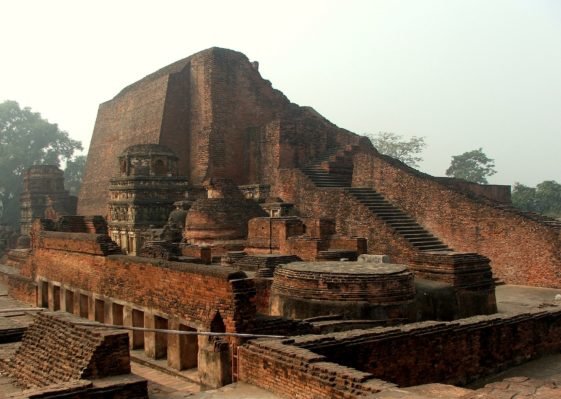 Founded in the 5th century, Nalanda University was one of the greatest university that the world saw in the ancient era.

How to get there: Nalanda is best reached from Patna which is well connected to all major cities in the country. The nearest airport is at Patna 89 km. Though Rajgir (12 km) is the nearest railway station to Nalanda yet the nearest convenient railhead is at Gaya 95 km.

One of the most prominent cities in the ancient Indus Valley Civilization as a significant port trading gem, ornaments, and beads, Lothal is around two hours away from the city of Ahmedabad. The ruins from the ancient time were excavated in Lothal only in 1955 and the government museum which is located here is an illuminating insight into what went in the town planning of this urban port.
The museum also displays seals and toys reflecting trade with the Persian Gulf and African ports. The development of Lothal as a trade port probably stemmed from its sheltered harbour by Bhugavo river and Gulf of Khambhat and suitability of soil in the Bhal region for growing grain and cotton. At the time, the region was already thriving in the business of bead making. A journey through the bucolic roads leading to 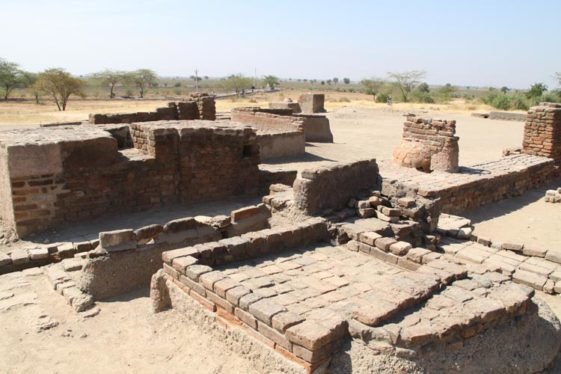 Lothal was one the most prominent city in the ancient Indus Valley Civilization as a significant port trading gem, ornaments, and beads

The remains found at Kalibangan (near Hanumangarh) in 1951 reveal that this area was once part of the nearly 5000 years old Indus Valley Civilisation. The remains of the human skeletons, unknown scripts, stamps, coins, utensils, jewellery, toys, statues, wells, bathrooms, fort, streets, markets, etc, found during excavation tell the story of the well-developed lifestyle of our ancestors.
The identity of Kalibangan as a prehistoric site was discovered by Luigi Pio Tessitori, an Italian Indologist. In fact, it was Tessitori who recognised that the ruins are ‘Prehistoric’ and pre-Mauryan. The excavation of the city started in 1969. The archaeologists also found two mounds representing two phases of settlement: the first between 3500 BC and 2500 BC and the second between 2500 BC and 1750 BC. 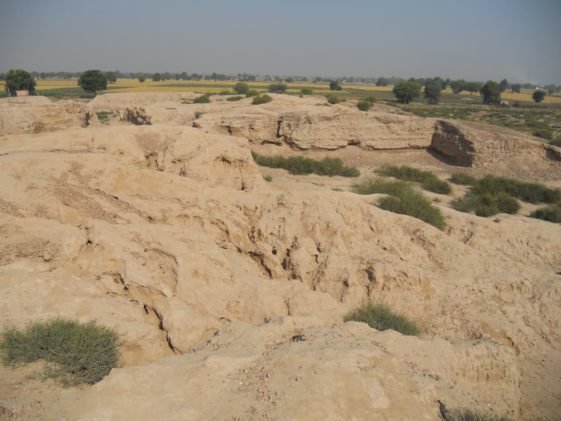 Lothal was one the most prominent city in the ancient Indus Valley Civilization as a significant port trading gem, ornaments, and beads

How to get there: The nearest railway station is in Bikaner, Rajasthan. A car or drive to Kalibangan from Delhi takes around 7 hours.

It is one of the most prominent and largest archaeological sites in India. The site belongs to Indus Valley Civilization. Locally known as Kotada Timba Prachin Mahanagar Dholavira, the site was discovered in the year 1967 – 68. It is the fifth largest Harappan site in the Indian subcontinent. The site has been under excavation almost continuously since 1990 by the Archaeological Survey of India.
The excavation of the site brought in light the sophisticated planning and organized architecture of the area. The site includes reservoirs, step well, and various other antiquities such as seals, beads, animal bones, gold, silver, terracotta ornaments and vessels. 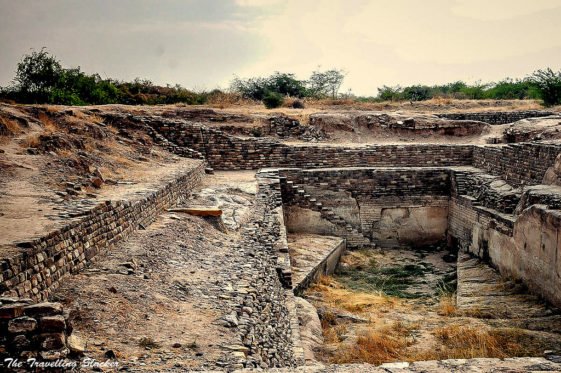 How to get there: Dholavira does not have a train station, and the nearest station is Ahmedabad, at a distance of 257 km from Dholavira. Bhuj Airport is the nearest airport from which you can get a flight for all the major cities.

Deep in the ravines of Chambal region and on the north-western slope of a range of hills near Padavali, located are 200 ancient sandstone temples, believed to have been built between 8th and 10th century. he shrines in Bateshwar complex are dedicated mostly to Shiva and a few to Vishnu. The sandstones temples were built during the reign of the Gurjara-Pratihara Dynasty 300 years before Khajuraho temples came into existence.
At the gate, a paved trail takes you to the complex. As you walk up the trail to the ruined Gopur Dwar you see the swarm of gleaming temples looking ethereal in the morning sun. The temple complex was once also the habitat of the infamous Chambal dacoits and was in a dismal state before the work of restoration to save the temples. 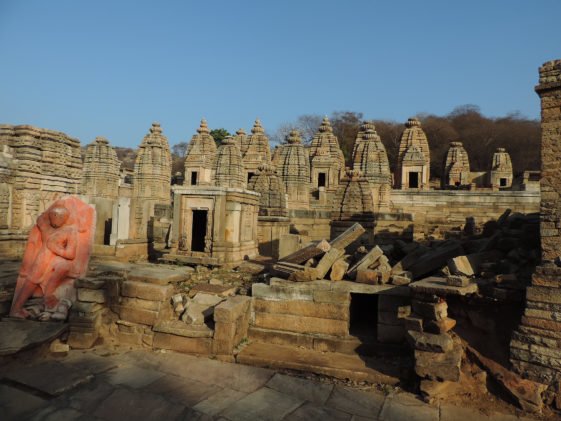 The shrines in Bateshwar complex are dedicated mostly to Shiva and a few to Vishnu.

How to get there: It is situated about 40 km from Gwalior, which is well connected by air, rail and road. From there, one has to go to Padavali by bus or taxi. The best time to visit the place is during winter when the weather is pleasant.

Dubbed as the ‘Himalayan Pyramid’, Masroor Rock Cut villages are located in a complex of temples located in Masroor in Kangra Valley in Himachal Pradesh. A complex of monolithic rock-cut temples, in shikhara (raising tower) style of classical Indian architectural style, these temples have been dated by historians to be from 6th to 9th century. while there are many places in western and southern India where such rock-cut structures exist, such an architectural style is unique to the northern part of India.
There is a lake or pond called Masroor lake in front of this edifice which shows a partial reflection of the temples. A legend attributes its construction to the Pandavas of Mahabharata fame who resided here during their “incognito” exile from their kingdom.

A complex of monolithic rock-cut temples, in shikhara (raising tower) style of classical Indian architectural style, these temples have been dated by historians to be from 6th to 9th century.

How to reach there: Located at a distance of 38 km from the beautiful Kangra Town. Gaggal is the nearest airport in the region. The closest railway station is situated at Una which is connected via a narrow gauge line with Ranital.

Some parts of Indian landscapes, especially the state of Gujarat and Rajasthan is dotted with water bodies which are not sea, lakes, or rivers. These waterbodies are ancient stepwells built centuries ago to tackle the problem of water shortage in the regions. The earliest stepwells most likely date to about 550 AD, but the most famous was built in medieval times. It is estimated that over 3,000 stepwells were built in the two northern states. Although many have fallen into disrepair, were silted in at some point in antiquity, or were filled in with trash in the modern era, hundreds of wells still exist. In New Delhi alone, there are more than 30.

Rani ki vav, the most famous stepwell of India is situated in the town of Patan in Gujarat. It is located on the banks of Saraswati River. Rani ki vav was built as a memorial to an 11th century AD king Bhimdev I. It was added to the list of UNESCO’s World Heritage Sites two years ago. Rani ki vav was built in the complex Maru-Gurjara architectural style with an inverted temple and seven levels of stairs and holds more than 500 principle sculptures. 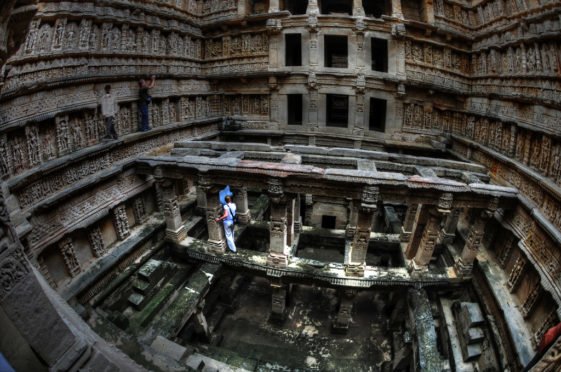 Rani ki vav, the most famous stepwell of India is situated in the town of Patan in Gujarat.

Another one of the most famous stepwells is the Adalaj Vav, located 18 km North of Ahmedabad. It is an average of six degrees cooler at the depths at the end of 75 meters of stairs in this beautifully preserved five-story well with octagonal landings.
It is one of the few wells with a richly documented history—featuring the tragic love story of its creation carved on a wall inside the structure in Sanskrit and Pali. Chand Baori in Abhaneri, near Jaipur, is perhaps the most visually spectacular stepwell of India. Chand Baori is a deep four-sided structure with an immense temple on one face. 3,500 terraced steps march down the other three sides 13 stories to a depth of 100 feet. The construction dates to the tenth century and is dedicated to Harshat Mata, goddess of joy and happiness.
How to get there: Gujrat and Rajasthan are well connected to all major cities of the country by railheads and air. 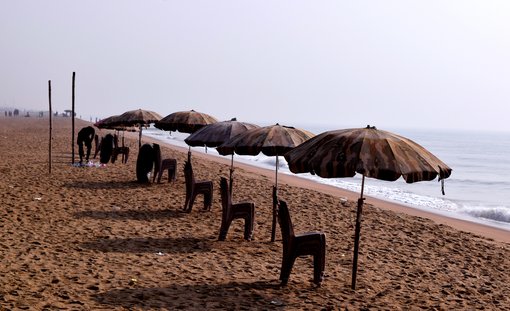 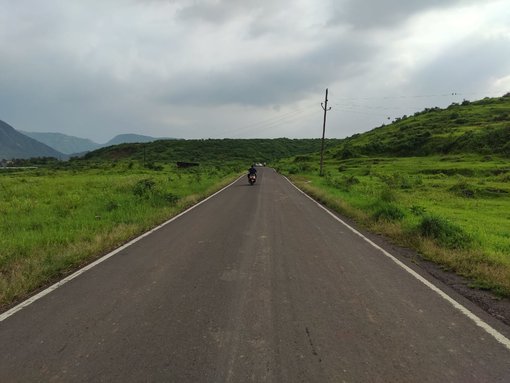 The Resplendent Memories at the Historic Ahilya Fort

How to Visit an Offbeat and Ancient Indian Temple?