The Best Galaktoboureko in Athens 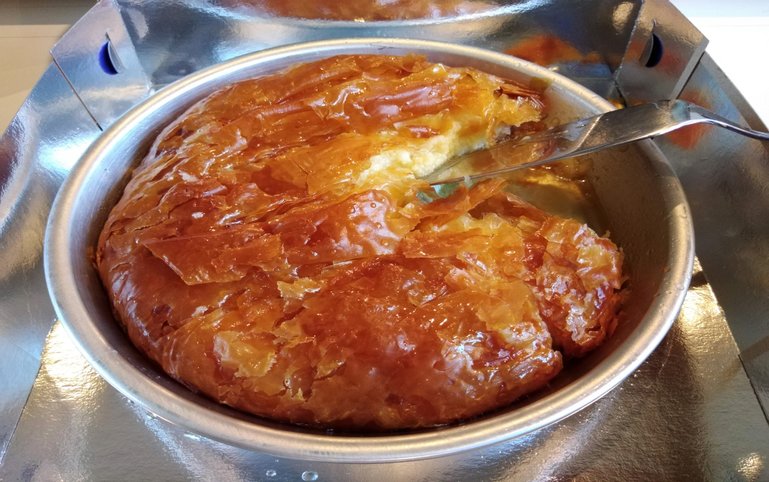 Galaktoboureko is a traditional syrupy sweet dessert made in a baking pan consisting mainly of phyllo and custard cream. There are various recipes and ways to prepare it but the cream usually has a lemon or vanilla flavour, while the syrup is made from sugar and water. Although it is considered traditionally Greek, some believe that its origins could be traced to the Middle East. Also, there are testimonies that in the 18th century Ottomans in Constantinople made a dessert with many layers of phyllo and cream, that was called “gateau fayette” due to its similarity with a French dessert.

In Athens, there are pastry shops specialized in galaktoboureko but you could also find it in almost every bakery and pastry shop around the city. Here is a list of our top ten places to taste the perfect galaktoboureko (in no particular order) : 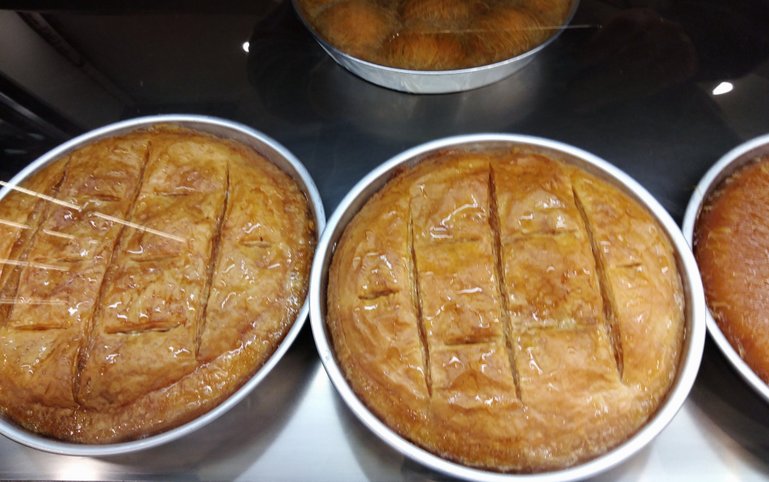 Since 1961 when the first shop opened in Agios Nikolaos suburb, this has been considered by many the best galaktoboureko in Athens. Back in the 1980s, you could wait almost an hour in line in order to buy it. The phyllo is always crunchy, the cream smells fresh milk butter and the syrup is made with a secret recipe without lemon. Nowadays Kosmikon has four locations around Athens. (Leoforos Ionias 104, Agios Nikolaos & other locations)

Another traditional place to buy galaktoboureko, with a history that started back in the 1970s. Galyfianakis was one of the first pastry shops specialized in the making of galaktoboureko and for many years was the most popular place to buy it in Athens. The quality continues to be high and it still has many devotees. Also, it was the first place to use kantaifi instead of phyllo in the making of galaktoboureko. Nowadays there are at least 10 locations all over Greece. (Εfroniou 60, Pagrati & other locations)

This is a dairy store that was established in 1964 and now has five locations in Athens. This long tradition in dairy products, give them the experience to make an excellent cream with fresh milk (50 – 50 sheep and cow milk). The cream is thick and tasty, while the phyllo is crunchy. The syrup is fine but a little thicker than necessary. (Leoforos Pentelis 139, Chalandri & other locations) 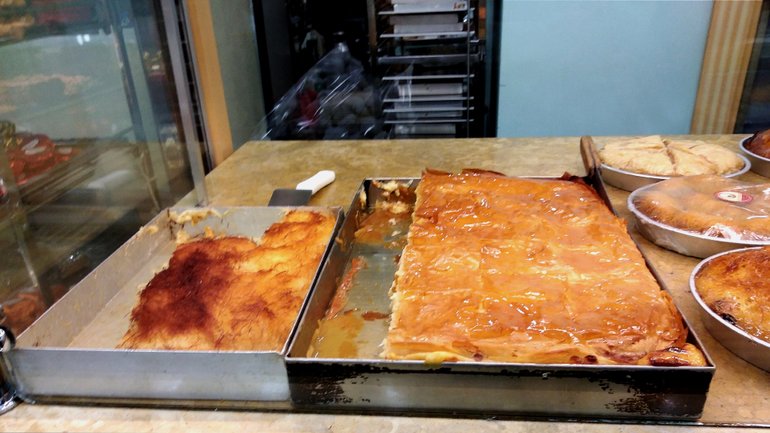 This one is the most famous galaktoboureko in Piraeus. It started as a diary store in 1909 and still operates in the hands of the same family. They use milk from their own farms and much attention is put on the quality of all the products they use. The cream has the perfect texture and a strong milky taste. The phyllo does not have many layers but it is crunchy and the syrup is balanced. They make also very good galaktoboureko with kataifi. (Karaoli and Dimitriou 68 & Karpathou 74, Piraeus)

With a family tradition of almost 40 years in galaktoboureko, they sure know how to make it. They always use fresh products which give their galaktoboureko a characteristic creamy taste. The phyllo is not always crunchy but they have one of the best syrups. It has the perfect texture and it is not very sweet. It is probably the favourite galaktoboureko of the western suburbs of the city, where their first shop opened in 1999. (Monemvasias 17, Peristeri & other locations)

This place is one of the oldest surviving and historical pastry shops in Athens. It has been standing at the same spot since 1915 and has kept its good reputation since then. It is well known for its creams, therefore it is easy to understand why they make a very tasty and quality galaktoboureko. The cream is rich and smells of fresh milk butter (which they produce), while the phyllo is usually crunchy and not very syrupy. (Charilaou Trikoupi 82, Athens) 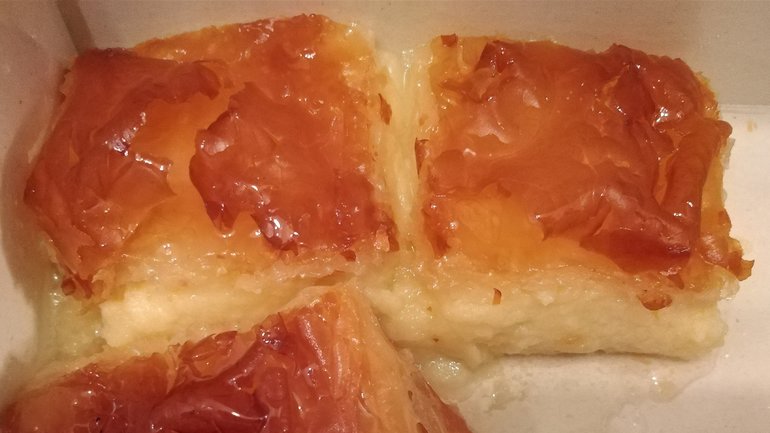 On one of the main streets of Nea Smyrni, this pastry stop seems stuck in the past. It opened in 1958 and since then few things have changed in the decoration of the place, as well as in the production of its sweets and especially galaktoboureko. The cream has a balanced taste, the syrup has a perfect texture with a light scent of cinnamon, while the phyllo is always crunchy and very tasty. People from every corner of the city come to this small pastry shop to taste its unique galaktoboureko. (Eletheriou Venizelou 165, Nea Smyrni)

The origins of Pavlidis family in Mikra Asia are evident in their deep knowledge of making traditional sweets and especially galaktoboureko. Pavlidis opened his first shop in 1946 and in 1957 its second shop on Katechaki street, which is the one that still operates. The secret recipe of the family has been perfected through the years and it is based on the excellent quality of ingredients. Their galaktoboureko has smooth cream with strong butter flavour, very good syrup, and always crunchy phyllo. (Katechaki 59, Neo Psychiko)

Although quite new (it opened in 2016) this shop has already a very good reputation not only in Pagrati but all over town as well. It has an open workshop, where you can see the preparation of their products and their signature sweet is galaktoboureko. They use only Greek products and for the cream fresh milk butter. The phyllo is not always crunchy but the final taste is always very good. (Eftichidou 2, Pagrati)

A pastry shop a bit far from the city center but famous in the eastern suburbs of the city for many years. Crunchy phyllo, cream without a strong milk or butter taste (perfect for those who want it like this), and very rich in syrup. If you happen to visit one of the famous meat taverns of Vlachika in Varis, this is probably a perfect dessert for you. (Panos 6, Vari & 3 more locations)

To end up with a final top ten among the many pastry and diary shops that make very good galaktoboureko in Athens was hard. It is almost certain that we have left some equally good out of our list. 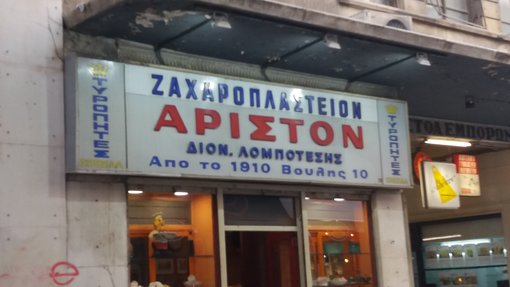 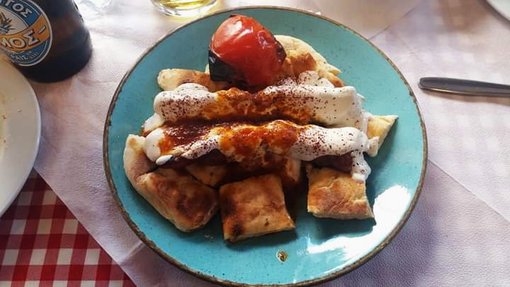 Where to Taste the Best Kebab in Athens