This 3 day hiking tour to the Southern Armenia is a journey, which will take us to the IV century, when Armenia became the first country in the world to adopt Christianity. It will show us the heavenly gates of the Hells Canyon Armenia and will help to imagine how people used to live in caves until recently.

In the morning we will move to the South Armenia. On our way we will see a well known and significant temple – Khor Virap. The temple is built on the deep pit, where on the 4th century Gregory the Illuminator was imprisoned for almost 15 years. We’ll go down to that place and try to feel the spirits of the past. From Khor Virap there’s a good view of mount Ararat.
For a long time the mystery of Hells Canyon Armenia remained unsolved, as no one ever thought of going further the beloved rocks and move along the gorge of river Aratso. But our expeditionary group took up this job and after exploring all the possible ways we have developed the safest and most beautiful hiking trail, which we offer to walk with us.

At the beginning of our hike, we will climb the mountain Tezhkar, which is 1735 meters high from the sea level. From the top we will enjoy an amazing view of a biblical mountain Ararat. After we will go down to the canyon, where the divine beauty of the Hells canyon will be waiting. We’ll walk along river Aratso and admire the beauty and power of massive rocks. At the end of the day we will continue our way to vayots Dzor province, where we will stay for the night.

In the morning we will move to Syunik region and go down to Vorotan Gorge, where we will see several abandoned villages with huge houses carved out of the rock. After seeing all these you can easily imagine how people once lived in the caves.

Old Khot is one of the oldest settlements of Syunik region. People call this place “Armenian Machu Picchu”. In Old Khot there are a lot of graves, which date back to I-II centuries BC. The ruins of Red monastery, which was built in XII century, were found in the territory of one of the graveyards.
After exploring the village Old Khot, we will continue our way through the narrow wooded paths to an abandoned village Old Shinuhayr (“Father of settlements”). Shinuhayr is one of the oldest settlements of Syunik. The last inhabitant of the village lived there until 2017. In the XII century the central church of the village, which was built in IV-V centuries, was destroyed by the strong earthquake. The church was restored after the earthquake and until now it stands untouched by the time in the territory of Old Shinuhayr. After exploring the village we will move to Goris, where we will stay for the night.

In the morning we will see one of the most visited villages of Syunik – Old Khndzoresk, which is known for its cave dwellings and 160 meter long swinging bridge. At the beinning of XX century Khndzoresk had aprroximately 8000 inhabitants. In 1950 was made a decision to resettle the inhabitants of the old village to the new one, which was also called Khndzoresk.

Next we’ll cross the deep Vorotan Gorge on the world’s longest ropeway, which will take us straight to Tatev monastery. Tatev monastery is one of the must-see places of Armenia. The monastery was named after St. Eustathius, who was the pupil of St. Thaddeus. Likewise his teacher he preached Christianity, and met his martyr death for the new faith in Syunik. In IV
century in this place people built a small church, which pilgrims started to visit from V century. At the end of VIII century Tatev became an episcopate of Syunik region. 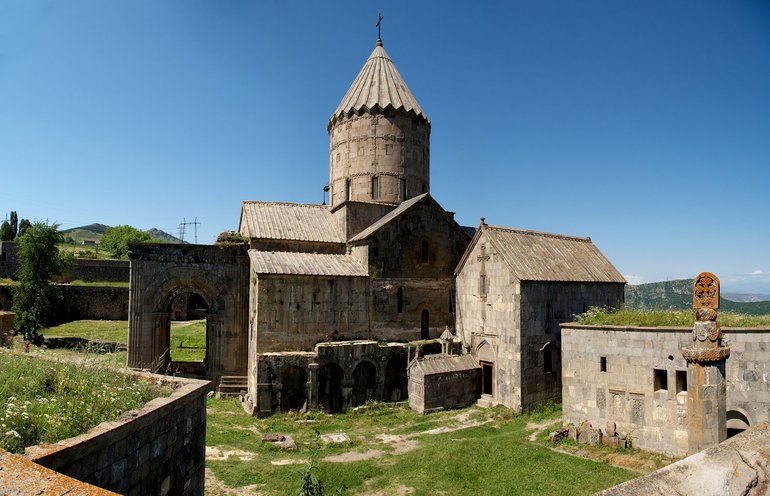 After exploring the monastery we will move to the Devil’s Bridge. Devil’s Bridge is the only bridge made by the nature itself. There are stalactite formations and natural “baths” of mineral water. If the weather would be hot , you can swim under that natural baths.
So passing through the centuries, we will reach, let’s say, the late medieval period and visit the Noravank monastery, which the locals also call the Red monastery. The gorge where the monastery is situated is known for its steep red cliffs, towering behind the monastery. In Soviet times the championship of rock climbing passed here. Noravank is also known for its bas-relief where the image of God is.

Pay 15% now, the rest on the day of the trip
Strict cancellation policy

Service of the guide-translators, transportation within Armenia, accommodation, food service during the whole tour

Our guides are local, but speak English fluently.
We are all professionals here and are well-known in Armenia.
Overnights will be at hotels and guesthouses.
Breakfast, lunch and dinner are included. Mostly will be national dishes from Armenian cuisine.
If there are vegetarians in the group, please inform us beforehand.
The breakfast and dinner will be mostly at hotel/guesthouse. During the trip we’ll take some dry rations with us.
Our bus will accompany us all the way.

Everything is included in the cost. You’ll have nothing to pay, excluding your personal expenses.

Hike in the mountains and forests of Tavush

With the help of this 3 day hiking tour in forests of Tavush you will discover one of the greenest regions of Armenia. Have one of the greatest adventures of your life in Lastiver and admire breathtaking nature scenes.