The Marangu route is also referred to as the "Coca-Cola" route, as it is considered to be the easiest path on the mountain, given its gradual slope and direct path. It is the oldest and the most well established route on the Kilimanjaro. This is the only route which offers sleeping huts in dormitory style.

Marangu Route Kilimanjaro Climb 6 Days will give you a chance to reach the highest mountain in Africa which found in Tanzania and lies just 3 degrees south of the equator its permanently snow is very astonishing, Kilimanjaro offers one of the greatest opportunities in the world to climb the peak of high altitude with no need of technical climbing skills. The trek will take you over well-defined latitudinal vegetation zones, from semi-arid scrub to dense forest. It is open to any ordinarily fit and healthy person who prepared to put some energy to climb to the summit. Walking distance is approximately 60 kilometers start from Marangu Gate 1,860mts and slowly but surely, ascend is always on the day and stop at night to reach Gillman’s Point 5,680mts and as a final point climb to Uhuru Peak 5,895mts the real summit. 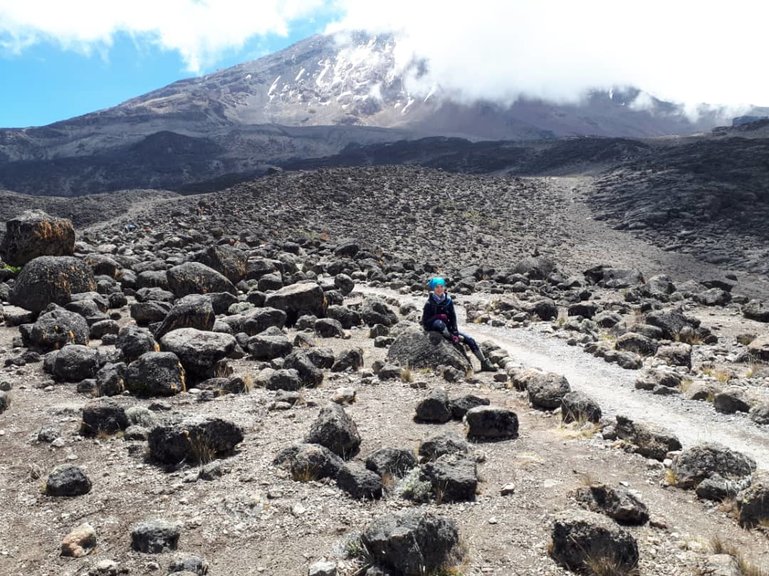 Day 1 –MARANGU GATE- MANDARA HUT
You will be picked up from the hotel and a drive to Marangu gate follow as you drive towards the gate you will be enjoying excellent views of the mountain, you will meet your team of guides and porters at the gate. Whilst in the forest you could see bright co-loured birds, colossus monkeys and other species of monkey as well as mosses, lichens and flowers and delicate orchids. If the skies are clear you can see the town of Moshi lying at the edge of the plain further down. Once registrations finished you will start ascending leave the park buildings the walk is 4-5 hours through areas of coffee plantation and thick rain forest to Mandara Hut for Dinner and overnight.

DAY 2 – MANDARA HUT – HOROMBO HUT 3,720 Mts
The second day on the mountain starts just after breakfast with a steep climb through the last swathe of rain forest, though this soon gives way to rolling alpine meadow dotted with giant heather. Once you leave the forest sunshade, Kilimanjaro’s two peaks snow covered Kibo and rocky Mawenzi – lie straight ahead overlooking the skyline.Further on you cross a zone of open moorland with diminutive vegetation, today you gain roughly 1,000 m altitude; the walk can take five to seven hours depending on your pace but always POLE POLE. Tonight for Dinner and overstay at Horombo Huts.

DAY 3 – HOROMBO HUT
A day here provides an opportunity for you to acclimatize step by step to the altitude, Information show that an acclimatization day effectively doubles the chance of succession to reach the summit, thus the time is well spent! The day is not precisely wasted as there is several walks you can take just in the locality of the hut, but we will take the most famous walk of which most people take for acclimatization which leads you to the base of Mawenzi Peak the dramatic eastern summit of Kilimanjaro.The walk takes 4-5 hours a round trip and will go till to an altitude of 4,600Mts then you will return back to Horombo Hut for Dinner and Overnight this walk will put you in good shape later on.

DAY 4 –HOROMBO HUT- KIBO HUT
The scenery turn out to be more rocky and rough as you leave behind kibo ,everlasting flower and other bizarre alpine plants Massive groundless and lobelias appear in the sparse moorland. The trail up to Kibo will take between five and seven hours. Skirting Mawenzi Peak ass you pass the Last Water point then you cross a stark, almost lunar landscape to the Saddle which is a wide tundra desert between the two peaks of Mawenzi and Kibo. Here you will start getting fantastic views of the upper ranges of the mountain before arriving at Kibo Hut (4,705 m), a dry-stone-walled hut with dorms and limited facilities. Tonight you prepare for tomorrow’s final assault – THE SUMMIT – re-packing to leave any non-essential items with the porters; you need to summon all your energy to get to the summit so there’s absolutely no point in carrying anything you don’t need! An early night is imperative as you must make a midnight start in order to reach the summit in the morning before the cloud cover settles, and then have time to get back down to the hut. Overnight stay at Kibo Hut for 1 night (Breakfast, Lunch and Dinner)

DAY 5 – UHURU PEAK
This is a long and demanding day! The guides wake you soon after midnight and you start out in darkness, zigzagging up a long scree slope by the light of your torch in the extreme cold. At this time of day the scree is still frozen – which makes it easier to walk on! After roughly two hours you should reach Hans Meyer’s Cave – named after the German geologist who made the first successful ascent in 1889 – where he found the remains of a frozen leopard. The gradient gets steeper and three hours on (this is the hardest stretch of the climb! you should reach the crater rim at Johannes Notch. From here it’s a short scramble to Gillman’s Point (5,685 m) in time for dawn. Your reward is the dramatic spectacle of the sun rising over the ice fields and craggy peaks of Mawenzi – the profusion of colors and shapes make all the suffering seem worthwhile! For those who still have the energy and drive, it takes another couple of hours along the crater rim to reach Uhuru (Freedom) Peak (5,896 m). Your descent (approx. 3 hours) retraces the route back down past Kibo Hut to Horombo Hut for a well-deserved rest.
Overnight stay at Horombo Hut for 1 night (Breakfast, Lunch and Dinner)

DAY 6 – Back to Moshi.
The pace quickens as you continue your triumphant way back down across alpine meadow and past Mandara Hut through the rain forest to Marangu Gate where you board the vehicle for the journey back to Moshi.

To be prepared for the trek physically and mentally

WELCOME TO TANZANIA Marangu Route, commonly known as the Coca Cola route is more popular because it can be done in fewer days and has permanent sleep huts at the campsites. Summit night from Kibo Hut is steep and passes Gilman’s Point to Uhuru Peak. It is a shorter route with a steeper incline and less time for acclimatization it ten

The Lemosho route is considered the most scenic trail on Kilimanjaro, granting panoramic vistas on various sides of the mountain. As one of the newer routes, Lemosho is a superb choice for your climb. It is our preferred route due to its ideal balance of low crowds, beautiful scenery and a high summit success rate.