Tour Grade: Leisure with short walks.
Areas of Tour: Within Kathmandu city and Patan areas.
People and Culture: Newari people of Kathmandu valley with other mix ethnic tribes of Nepal of both Hindu and Buddhism religions of various impressive culture and custom.
Mode of transport: Car or coach as size of the group with tour guide.
Duration of Tour: 9 A.M. to 4 P.M with lunch break.
Best Seasons: Nearly all months of the year except monsoon wet months from mid June to mid September, March to May best time for clear views till afternoon with fantastic views of mountains, a pleasant day with cooler morning and night time. October to January months another best time for clear views of peaks with short sunlight day cold in the morning and night time.

Kathmandu Day tour starts after your hearty breakfast in the hotel, where our city / tour guide will pick you at the hotel for short drive or walks (depending upon walking distance).
Tour begins right from the heart of Kathmandu city around old Durbar Square (Palace and Courtyard), an amazing place within hub of metropolitan life where you will be in the midst of med-vial and ancient era of old temples and palaces of Malla times to late Shah period. 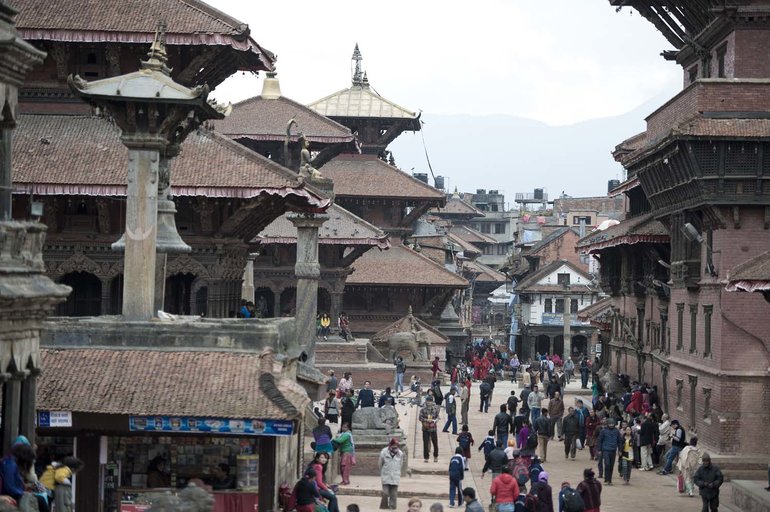 The Durbar Square is lively with colorful life of street vendors, selling curios, flutes, and other handicrafts within Kastamandap rest house. The rest house is constructed from the wood of a single tree where name Kathmandu derived from, built in 1596 A.D. by King Laxmi Narsingh Malla.

Places of interest around Durbar Square:

Known as Blue Bhairab, three tier temple near main market of Indra Chowk. The divine image of Akash Bhairab is displayed outside for a week-long period, during great festival of Indra Jatra.

The celebration of Indra Jatra honors Indra- the King of Heaven and the God of Rain.

Temple of Kumari with holy quadrangle houses, a Buddhist Stupa in the center is a residential quarter of Chaste Virgin ‘Living Goddess’ called ‘Kumari’. The traditional building carved with wooden balconies and window screens.

The Kumari the Living Goddess greets visitors from the middle window of the balcony particularly saved for her only and taking photos is strictly prohibited.

Completing an hour visit around Durbar Square, our guide and cheerful driver takes for short drive, outskirt of Kathmandu city to reach a small hill covered with green patch of forest. The place Swayambhunath is also known as Monkey Temple due to many Rhesus monkeys around. 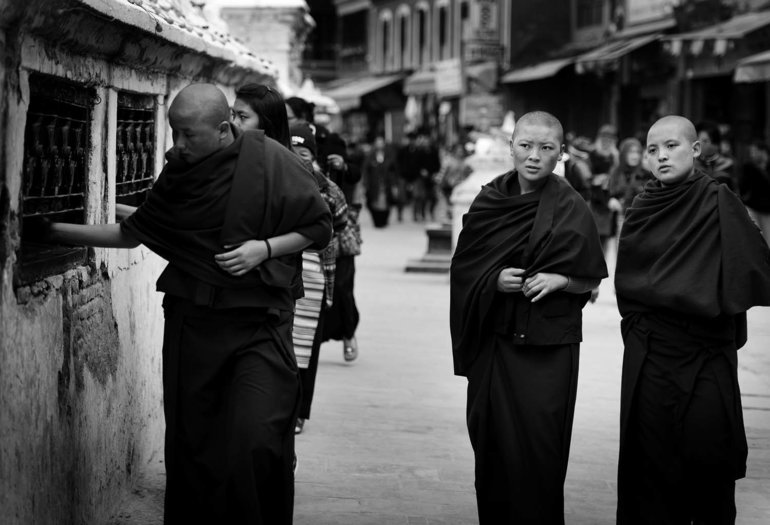 Swayambhunath Stupa, an ancient monument and famous landmark of Nepal, believed to be more than 2,600 years of history stands as one of world's oldest Buddhist Stupa / Chaitya.
The Great Stupa of Swayambhunath is a wonder and glory of Nepal.It is an excellent view point of whole Kathamndu city which is covered by green hills all-around.

This famous ancient Stupa is listed in World Heritage Site. Similarly, the large Buddhist dome shaped Stupa is composed of a solid hemisphere of terra - cotta bricks and soil supporting a cornice of copper and gilt with paints on four-sided of the spiral. Where all seeing eyes of Lord Buddha keeps an eternal watch over the valley distinguishing between vice and virtue.

After a grand time with views of Kathmandu city from Swayambhunath, the short drive leads to east of the city at Bouddhanath also called as ‘Little Tibet’ due to similar culture and custom with Tibetans origin people that resides around. 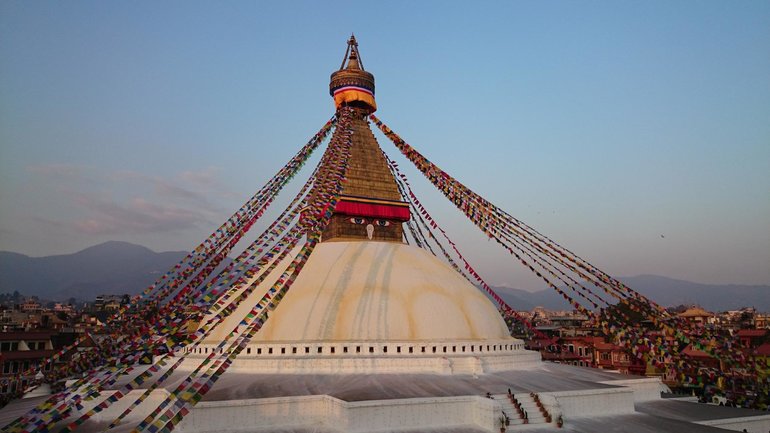 It rests on a series of three terraces looking from bird's eye view. It’s a relevant shape of a lotus flower which indeed remains a very holy object for all world-wide Buddhists devout.
The Stupa known as Chorten / Stupa surrounded by a circular market with four pairs of Buddha's eyes giving a stunning flash around four cardinal directions, as a diligent watch over the people and their commitments.

The Stupa embraces authentic philosophy of Mahayana faith of Buddhism which is known as Lamaism in Nepal, Sikkim, Ladakh, Bhutan and Tibet.

With time here for lunch break, enjoy meals in a nice terraced restaurant with views of large Bouddhanath Stupa.

After enjoying morning and mid afternoon with exciting tour of Durbar Square, Swayambhunath and Bouddhanath Stupa and having lunch, a short drive leads nearby to holy temple of Pashupatinath.

One of the most sacred sites of entire Hindu world, Pashupatinath Temple is the nerve center of pilgrimage for millions of Hindu on auspicious day of Shiva-Ratri (birth anniversary of Lord Shiva) around mid February as per Hindu calendar.

Inside the main temple premises where only Hindus are permitted to enter, non Hindu and foreign visitors can observe the temple from the east side of the Bagmati River.

With interesting time at Pashupatinath temple where drive leads to south of Kathmandu city to enter into another adjoining city district of Patan or Lalitpur means the city of great art and masterpiece handicrafts.

Patan or Lalitpur at one time a separate kingdom around 6th to 17th Century, tour begins from Patan old Durbar Square teemed with full of local traditional activities.

On entering the premises where you will be amazed with ancient buildings a masterpiece architecture of intricate carving arts, most of the monuments listed in UNESCO World Heritage Sites.

Places around Patan-Lalitpur of great interest to visit for few hours to full day as per your time duration and interest, where our expert city guide will show you the wonder of ancient culture and heritage.

Great monuments and places of interest:

* Entry Fees for temple and Heritage site.
* Lunch and your personal expenses.
* Tips for Guide and Driver.

Pay 15% now, the rest on the day of the trip
Moderate cancellation policy

Need to take some Nepali currency while visiting

Eco Holidays Nepal is a rising adventure company based in Kathmandu Nepal. This company is run by tourism veteran, Mr. Dhruba Dharel, who has got experience of 13 years. Eco Holidays Nepal offer services like Trekking in Nepal,Day tours and Hiking,Peak Climbing,Adventurous sports,Jungle Safari and Bird Watching with Vehicle hiring and Airline ticketing. We want to extend our travel services beyond Nepal to Bhutan and Tibet.Our goal is to provide package based services with customizing the services as per requirement of travelers. Providing the trip service more than trip price is what we aim for.