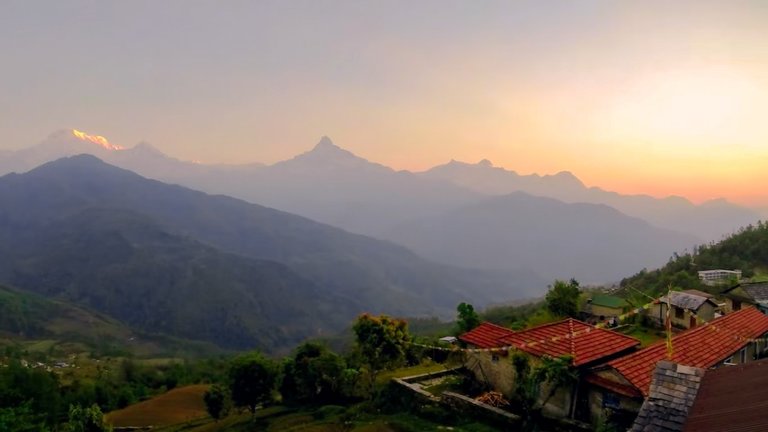 Around 26 km northwest of Pokhara lies Dhampus village at an altitude of 1650m. It is a small village on the hilltop. Everyone who treks to Annapurna Base Camp must go via Dhampus. It is Dhampus from where you can get the best view of Annapurna Region without going to Annapurna. The hike usually starts early in the morning post breakfast. Our guide will meet you at your hotel lobby at a discussed time. He will give you a short briefing and you will head to Phedi in a private transportation. Phedi is about 18 km away from Pokhara. It takes anywhere between 30-45 minutes’ drive depending on the road traffic. The trek starts from Phedi. You take the oldest trail to Dhampus which is rarely used by the locals since the motorway was built. This trail will lead you through the forest and several villages. It takes around 90 minutes on an average to reach Dhampus. As you walk through the forest you can enjoy the peaceful environment and can occasionally spot various species of birds. The sound of chirping birds and crickets blend to create a soothing music of nature. As you approach Dhampus Village, the view of Annapurna unfolds gradually and by the time we reach Dhampus we will eventually be able to see Fishtail (Machhapuchhre) and Dhaulagiri to Lamjung. After arriving at your hotel in Dhampus, you will get fresh and have lunch. After lunch, you can either explore the village or choose to relax and enjoy the view of the Himalayas from the hotel. The following day you can wake up early to watch the sunrise. We don’t need to go any sunrise point to watch as it can be enjoyed anywhere from Dhampus Village. Later you have breakfast and start for the day and head towards Australian Camp. It is comparatively easier climb than from Phedi to Dhampus. This camp also locally known as ‘Thhulo Kharka’ is situated 1890m above sea level. During the early days when the trekking route for Annapurna was opened to the trekkers, many people camped here before heading towards the Annapurna Base Camp. Many Australian trekkers would set up a camp on this high grassland which eventually got named the Australian Camp. We can enjoy the seasonal flowers on this route. We can see the spectacular view of the Himalayas ranging from Annapurna South to Lamjung Himal and Manaslu to the north and fascinating city view of Pokhara and Phewa Lake on the south. You can either choose to spend a night here or you can trek down to Kande through forests and small villages. The downhill trek from Australian Camp to Kande takes anywhere between 90 minutes to 3 hours depending on your fitness. Our car will be waiting for you at Kande to take you back to Pokhara. It takes approximately an hour drive to reach Pokhara. This short yet mesmerizing trek is overall easy to moderate level of difficulty can be enjoyed by people of different ages and endurances.

Pick up from your hotel in Pokhara.