Baku is the capital of the Republic of Azerbaijan & located in the South of Absheron Peninsula. With ancient history, natural and geographical conditions, abundant surface and underground resources, favorable climate, international transportation centers, modern and strong infrastructure and developed economy becomes one of the most beautiful capital cities of the region with its considerable strategic importance, as well as urban culture, modernity and beauty. 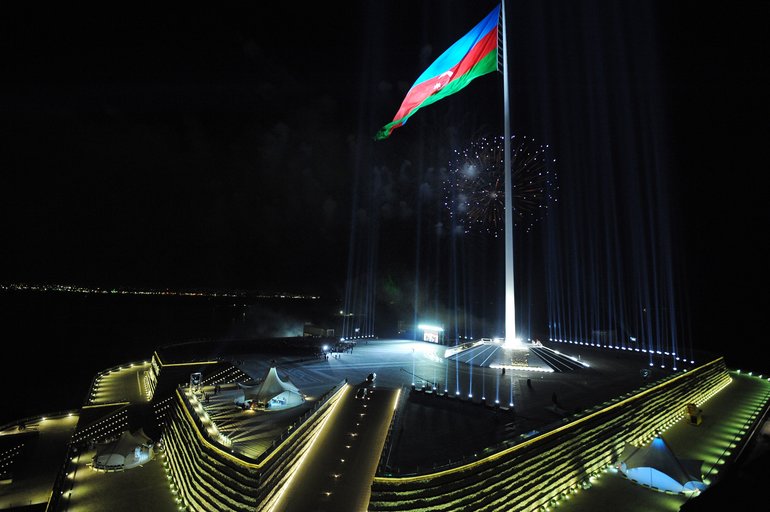 The main aim of the Baku City Tour is to show you all the important and dazzling sites and buildings of Baku and to create a nice luxury image of the city in your minds.The best tours take you to the winding streets of Baku, the capital of Azerbaijan.The tour will be very helpful for you to plan your stay in Baku more effectively. If you don’t know what to do on your visit to our country, check out the program itinerary. 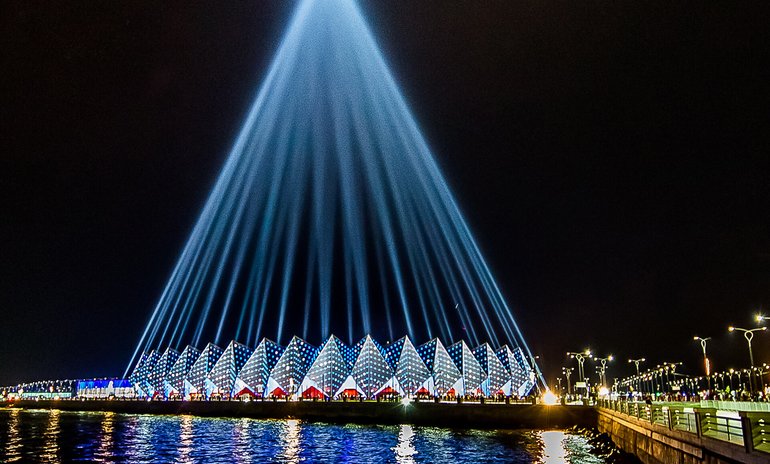 The first destination of the tour will be the Highland Park which is the highest spot of the Baku. From the park, you will see the panorama of the city which you will be able to see major buildings like, Flame Towers, Parliament Building, State Tv Channel Building and Broadcast Tower, Martyrs’ Lane, Chrystal Hall, National Flag Square and many more. You will be walking through the Martyrs’ Lane to the stairs called "40 Stairs" where your driver will pick you up. 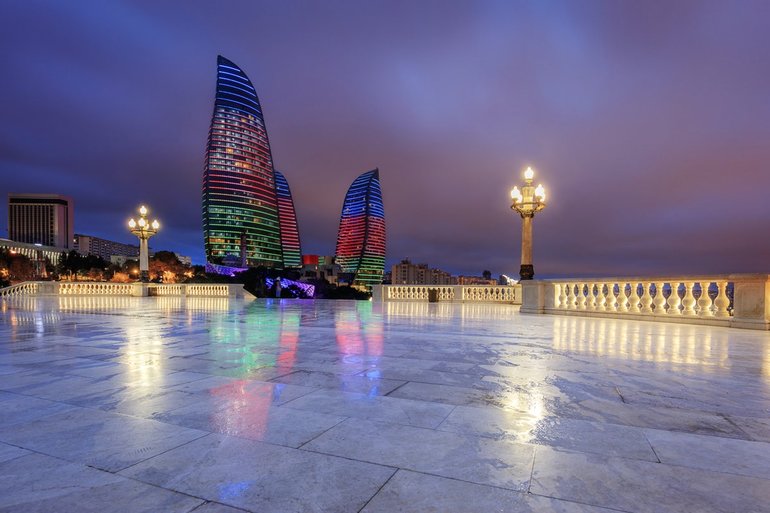 Then you will continue your tour program with Old City Walking tour. You will drive to the Double Gates to start Old City Walking Tour. This tour will takes time around 1-2 Hours. From Double Gates, starting the tour you will be able to see the Chain, Sailor and Cat Houses, Bukhara and Multani Caravanserais, Juma Mosque, Maiden Tower. Guide will explain to you the history of the Old City, and its buildings mentioned above. After taking pictures in front of the Maiden Tower you will proceed to Visit the Miniature Book Museum (if it is open), the biggest miniature book collection on earth that has a book which thickness of 0.75mm and consist of 22 Pages. Today, the museum holds a unique collection of over 5,600 books published in 66 countries around the world. 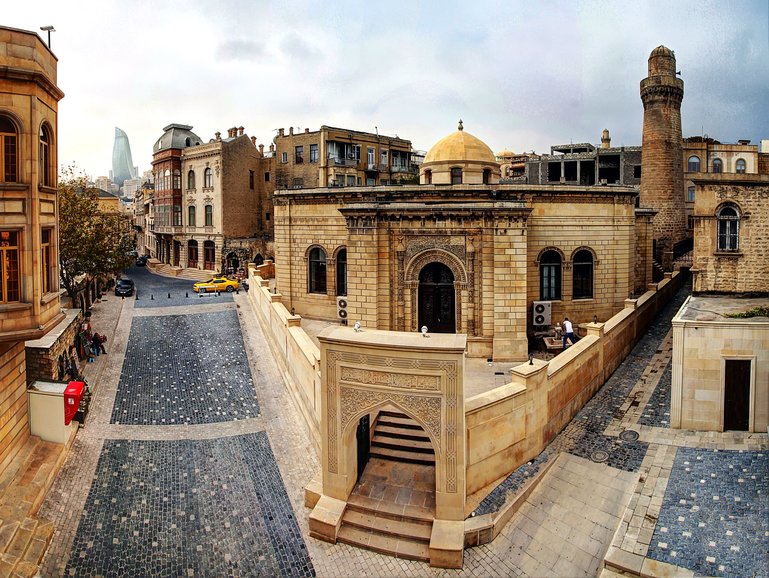 Maiden Tower is an Eiffel Tower of Baku.In 12th century it was used as a fortress of Shirvanshahs for defensive causes.Maiden Tower's architectural plan, seemingly so simple, consists of walls which at the base are extraordinarily thick, beginning at five meters in depth and gradually narrowing to four meters at the top. Today, the interior contains an interesting display of old photographs and a souvenir shop, but the highlight is the superb rooftop viewpoint surveying Baku Bay and the Old City. The views from the top are worth the climb, with a sweeping panorama of the Old City, the new skys crappers on the hills and the Caspian Sea. 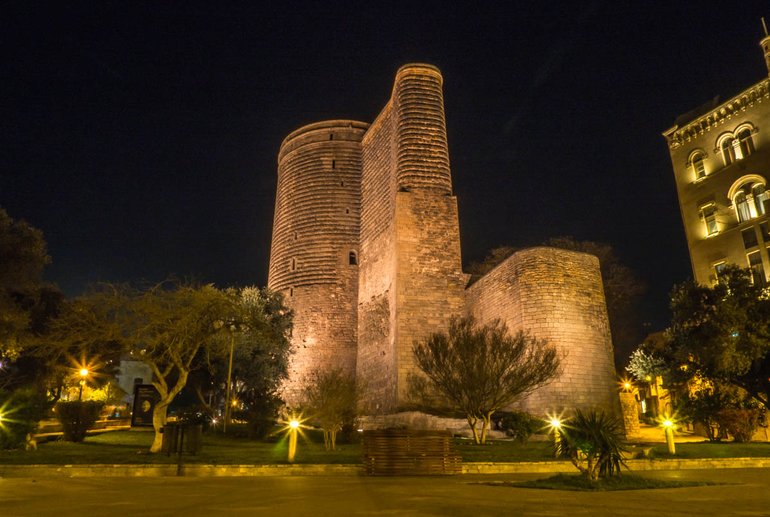 Baku Boulevard, also known as the National Seaside Park in Baku, Azerbaijan is the favorite promenade of many city residents and visitors and the second largest in Europe after the park on the banks of the River Seine in Paris. Its establishment goes back to more than 100 years, to a time when Baku’s oil barons built their mansions along the Caspian shore, and the seafront was gradually built up.Today, the National Seaside Park in Baku covers an area of 3,750 meters, and is located on the southern coast of the Caspian Sea. It starts at the National Flag Square and ends at Freedom Square.The Boulevard area includes a number of museums, cultural facilities, malls and entertainment centres, including the modern panoramic amusement ride – the Devil’s Wheel, which has a beautiful view over Baku Bay. 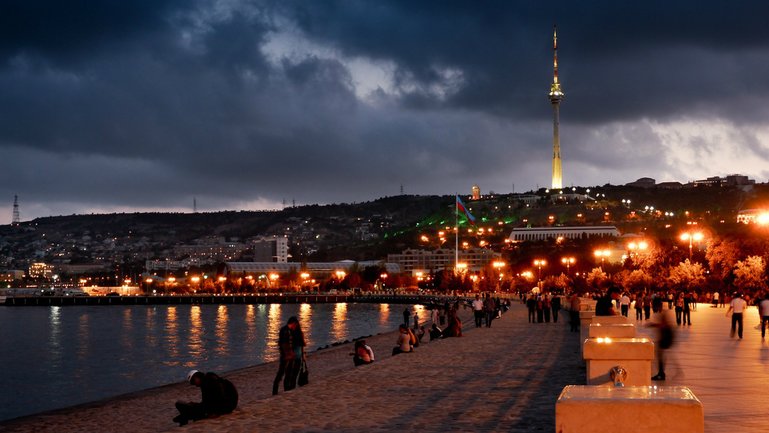 Little Venice” in Baku Boulevard is a small town built in 1960. It was expanded up to 10.000 sq.m. now. The town has two large and several small islands. The redevelopment of the “Small Venetian town” saw the expansion of the existing channels and the construction of additional bridges and two restaurants, one offering Western cuisine and the other Eastern. Boats are provided for 4 people: one is designed for guide and the rest – for passengers.Located nearby the Caspian seashore you will feel yourself as in Venice by visiting ‘Small Town of Venice’. The restaurants located in the ‘islands’ offer various meals of the different cuisine, including Azerbaijanian tasty dishes. It will be interesting firstly to observe around in gondola, later to have a great lunch or dinner in the ‘islands’. Currently Mini Venice has several islands which are divided by pristine water channels. Beautiful ornate bridges connect these islands. You can hire a 4 seater Gondola for a ride around these islands. There is one Eastern and one Western restaurant in this complex. 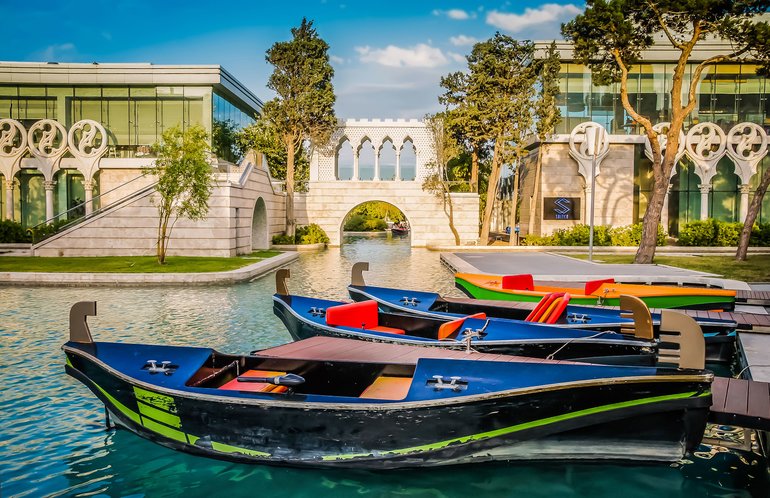 Fountains Square - The square is a public gathering place, especially after business hours and during the weekend. It is an attractive tourist destination with many boutiques, restaurants, shops, hotels and passage.It starts from the Istiglaliyyat Street and walls of the Icheri Sheher and stretches through Nizami Street, also called in popular culture as the Torgovaya street running parallel to Baku Boulevard.The fountains square is a location where the city authorities hold many public festivals, shows and celebrations.Endlessly popular with strollers, this leafy piazza forms Central Baku’s natural focus. The fountains for which it is named include one topped by shiny silvered spheres giving fish-eye reflections of the trees and stone facades. And the beautiful statue-inlayed facade of the Nizami Literature Museum. 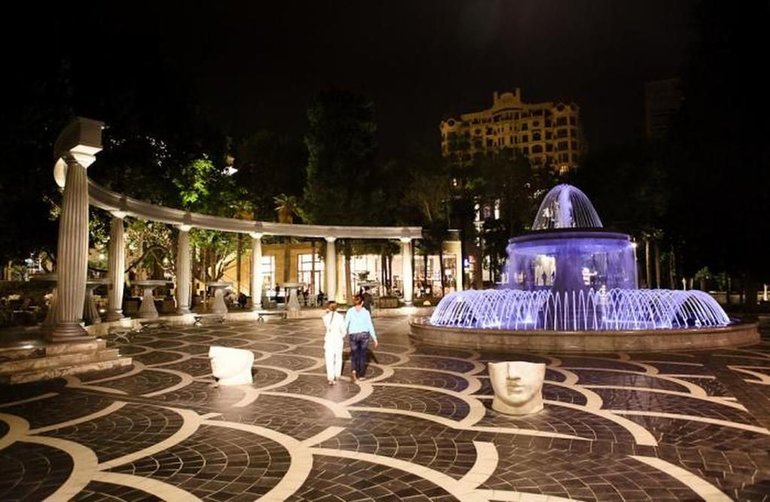 The next destination in the Baku city tour will be the Nizami Street. Nizami Street is home to various outlets, from banks to fashion stores and is one ofthe most expensive streets in the world. You will have 15-20 minutes to walk to see the beauty of the most central street of the Baku with full of shops and nice restaurants. You will also be able to see the Fountain Square full of magical fountains. 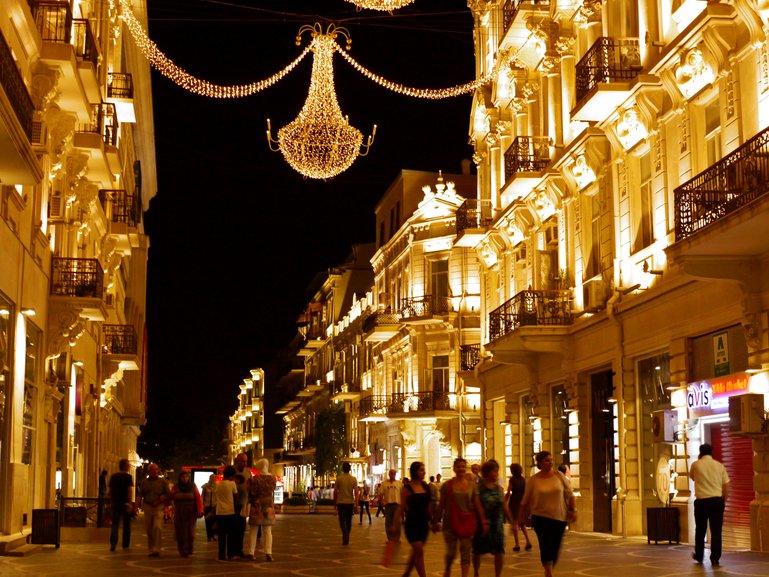 Azerbaijan is the West in the East and the East in the West! Welcome!

Entrance fees & Meals are not included in the price.