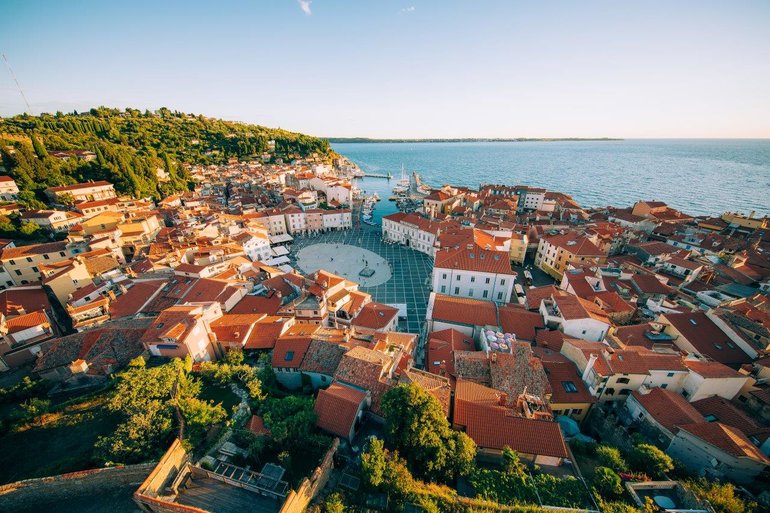 UNESCO karst attraction – the Skocjan Caves, the oldest and most notorious stud farm, known all over the world, and the picturesque coastal towns all wrapped up in one single fantastic tour.

Discover the Slovenian coast and the Karst region. The first stop are the UNESCO listed Skocjan Caves, one of the largest and most fascinating karstic sites in Europe with the Reka River running 200 m below the surface.

Next stop is at one of the local taverns for the famous Karst air-dried prosciutto tasting; we like to think it is one of the best prosciuttos in the world, accompanied with the local wine Teran – produced only in this region. Head on to for a short stop at Lipica, the homeland of the white Lipizzaner – famous horse of the Spanish riding school in Vienna.
Pass the coastal towns of Koper, Izola and Portoroz and reach everyone’s favourite spot on the Slovenian coast – Piran. Get lost in its medieval narrow streets and houses, enjoy some free time over an exquisite seafood meal in one of the many local restaurants or cafes.

One last photostop at Predjama Castle on the way to Ljubljana. Discover the secrets of the largest cave castle (Guinnes World Records!), located on a 123-meter high cliff, and learn about the local Robin Hood legendary knight Erazem.

Skocjan Caves: 18€/ 20€ per person, wine and prosciutto tasting: from 7€ per person, meals and personal expenses

Since there is a moderate amount of walking, we suggest wearing comfortable shoes. A jacket or sweater is advisable, since the temperatures in the cave are around 12° C.

Personal approach, flexibility and professionalism have made Roundabout Travel top rated tour specialist based on guests’ reviews. In 2005, armed with genuine enthusiasm, passion for travel and 9-year experience of working in tourism business, we threw ourselves into the (Slovenian incoming tourism) game. A new agency was born offering travelers countless opportunities to discover Slovenia at reasonable prices, but most importantly, in an extremely original and flexible way. From small groups in our vans exploring Slovenia above and beyond, we have come a long way. The small groups stayed, but the variety of tours and experiences out... Read more