In the morning visit of the medieval town of Kruja located on the slope of Mount Sari Salltiku. Take a walk along the old Bazaar known as the best place to find craft items. Subsequently proceeding to the 6th century fortress. Visit the ethnographic museum and the history museum. After the visit of the Kruja, continue to Ardenica. The monastery of Ardenica was built by the Byzantine emperor, Andronicus II Palaeologus in 1282, after the victory against the Angioni in the Siege of Berat. The monastery has a Byzantine orthodox architecture, with many Romanesque features, which provides an area of 2,500 square meters.Departure for the Apollonia Archaeological Park. Visit of the Apollonia Archaeological Park. Following the paths under the shade of olives, oaks and vigorous vegetation, we see the imposing walls of stone blocks, the agora, the Buleterioni, also known as the Agoneoteti time, marble colonnades, the amphitheater, the library , the stoa, necropolis, the baths, the gymnasium, nympheum, mosaics and other monuments that enrich this enchanted world. After the visit of the Park, departure for Vlora, known as the place where Albania's independence was proclaimed on 28 November 1912. Accommodation and overnight in Vlora.

We will travel all morning along the Albanian Riviera passing through small villages like Lukova, Qeparo, Borsh, Himara or Dhemi. Stop along the route in the Llogara National Park, where the altitude in the Llogara pass reaches up to 1010 m above sea level. Later he moved to the ancient city of Butrint. Visit the Ancient Amphitheater, the Temple of Aesculapius, the Baptistery with colorful mosaics and the ancient city walls. An old fortress that houses a small museum oversees the entire site, which is one of the last pristine and ancient natural areas of the Mediterranean. Visiting the Blue Eye (Albanian: Syri i kaltër) is a water source, a natural phenomenon. Very popular tourist attraction, the crystal clear water of the river flows from a beautiful pool of over fifty meters. The divers have fallen to fifty meters, but it is still unclear what the actual depth of the Karsts hole is. Leave the Blue Eye, drive to Gjirokastra. Accommodation and overnight in Gjirokastra.

This will be an interesting day in the museum city of Gjirokastra, which is also one of the three UNESCO sites in Albania. The city is dominated by the fortress of Gjirokastër, where the Gjirokastër national folklore festival takes place every five years. It is the birthplace of former Albanian Communist leader Enver Hoxha and well-known writer Ismail Kadare. Many houses in Gjirokastër have a distinctive local style that has earned the city the nickname "City of Stone" because most of the old houses have flat stone roofs. Gjirokastër presents an ancient Ottoman bazaar that was originally built in the 17th century; it was rebuilt in the 19th century after a fire. Today in Gjirokastër there are more than 500 houses preserved as "cultural monuments". Proceed to the city of "A Thousand and One" windows. Accommodation and overnight in Berat.

In the morning, explore the Berat Unesco Site. Start from the Citadel where there are still families living today. In the castle there are churches that survived within its massive stone walls. Visit the "Onufri" museum. Continue to the medieval part of the city where there are other objects such as the lead mosque, the Bachelor Mosque, the Gorica Bridge and many houses of the eighteenth and nineteenth centuries. After visiting Berat we will cross the border with Macedonia and we will arrive in Ohrid for accommodation. 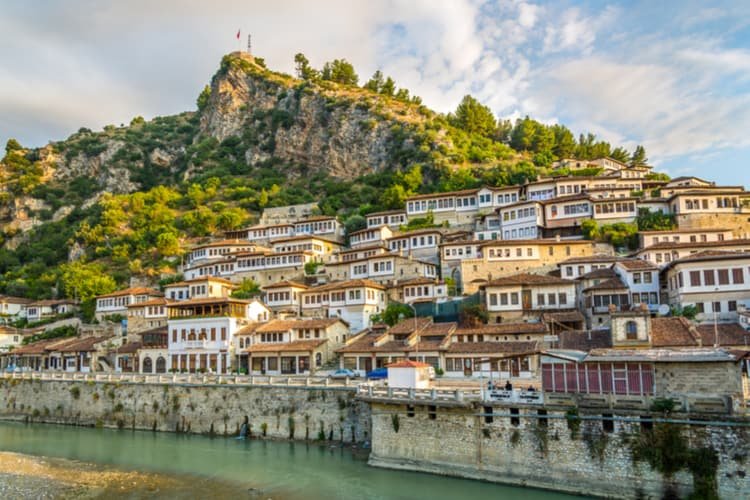 After breakfast we visit Ohrid. It is the largest city on Lake Ohrid and the eighth largest city in the country, Ohrid is famous for having had 365 churches, one for each day of the year, and has been referred to as Jerusalem (from the Balkans) Ohrid and the Lake Ohrid has been recognized as a cultural and natural heritage by UNESCO, in fact Ohrid is one of only 28 UNESCO World Heritage sites that are both cultural and natural sites.Lunch at the local restaurant. Visit the church of St. Sophia, Castle Samuel and The Church of Saint Clement, we will also visit the monastery of San Naum. Dinner and overnight at the hotel in Ohrid.

This morning we leave Macedonia and return to Albania.Today we will visit the Albanian capital of Tirana. Let's take a panoramic tour of Tirana along the main Boulevard where the main University, the President's Office, etc. are located. Continue to the Skanderbeg square where the National History Museum, the Ethem Bey Mosque and the Palace of Culture are located. Overnight and accommodation in Tirana

Day 8: Transfer to the airport!

End of our service

ALBANIA EXPRESS TRAVEL is a travel agency and DMC tour operator with great experience in arranging group tours, individual tours, accommodation, transport, experienced guides in different languages, events and meeting, Trekking, hiking and walking tours, holidays to Albania and its neighboring countries such as Montenegro, Macedonia, Kosovo, Croatia, Serbia and Bosnia and Herzegovina. We boast a hand-selected network of top quality hotels, highly trained multi-lingual guides, and the best of transportation and sightseeing companies. Having a long experience, Albania Express Travel has earned a reputation for excellence in the travel industr... Read more