Travels with Dude and Other Animals

Yes, Dear Reader, I have emerged from underneath heavy furniture and am back typing furiously whilst contemplating the last few weeks.

And what an incredibly odd introduction to 2021 we are all having, are we not?

There is most definitely a mood of irritated glumness almost globally, with people smiling through gritted teeth and posting crap on social media that's all stiff upper lip-ish

I've taken to posting my favourite Sesame St video of Grover doing his “near and far” piece to camera.

As you all have no doubt realised by now, my life is a medley of hilarious catastrophes...Most recent of these is 'the night the ceiling came down.' The subsequent travails attendant upon this have 'enlivened' my weekends so far in 2021.

Despite paint and wallpaper choice, three piece suite ordering etc it is slightly depressing constantly looking at and thinking about how much work there still is to do.

Although on a happy note I do have a ceiling now, no lights but they are on their way. At some point I hope.

Being of single status these days, (there is a story about this which I may or may not be blogging about in the near future) - (oooh, I've not heard this one and can't wait - Its not interesting there is literally nothing to tell) my opportunity for fun evenings of drink and chat are somewhat limited. Finding this ongoing solitary existence somewhat depressing I decided during a rather wild evening of watching telly and drinking on my own that I should undertake to do something new every month.

Naked skydiving beckons... It so doesnt

My first foray into the weird bucket list I have created for lockdown was a trip for Dude and I to 'Soggy Doggys.'

This appropriately named service is hydrotherapy for dogs. You book your slot and then get in to the swimming pool and lark about with your canine companion for half an hour or so.

It's better than being a sad cat woman I guess. Not Much Bec

This seemed like an awesome idea at midnight a couple of weeks ago after inconceivable amounts of Jack Daniels, at 9.30 am this morning in the snow it seemed like a bloody ridiculous thing to be doing.

It is a ridiculous thing to be doing.

Ignoring the inclement weather into Gertie, Dude and I hopped and headed off into deepest rural Leicestershire. It was cold and we of course got lost..Gertie's SatNav is unreliable at best and actually wrong the rest of the time.

Ha! It's not my fault this time.

Eventually arriving at the (hidden) location we exited Gertie, Dude by this time was very excited, and illustrated this by having a huge and very smelly poo in the farmyard.

'Couldn't you have gone before we came out?' I whinged pointlessly at him.

I love Dude very much but his conversation leaves an awful lot to be desired. He just looked at me with his usual dopey expression.

It would melt the hardest of hearts.

After removing said enormous crap from the farmyard, we wandered around looking a bit lost until I spotted a small sign pointing to soggy doggys - at this point I simultaneously realised that a. I had left my phone in the car so couldn't record for posterity our exciting undertaking and b. there were animals EVERYWHERE....

It's a fucking farm, what did you expect? I didnt expect an actual farm

The farmyard was wonderfully slippy as I found out when Dude took off in a most delighted fashion towards numerous chicken, dragging me behind him.

T (ex) BT and I were warned about 'the incident with the chicken' when I adopted Dude and I have always managed to steer clear since then.

‘T (ex) BT is translated as The ex Boyfriend Thing. For new readers of the blog, TBT was a total and utter cunt and I, for one am delighted he's moved onto prey on someone else, which he will because he has no spine whatsoever and moans constantly about his pathetic life which he has created for himself. I really don't like him. Can you tell?
Succinct Bec - I am still very fond of him.

Anyway as I‘m skating across a wonderful mixture of mud, poo and ice a vision of loveliness meets my eyes, steps infront of Dude who skids to a halt - Its my first intro to Morgan, owner of the said aptly named facility. Huge great big hunk of a bloke, unfortunately for my starved libido (don't judge me its been a year) he is about 12 years old, well maybe 20 but seriously at 52 it looks like the same thing.

Did he have thigh high leather boots on, a flouncy shirt, open at the chest and breeches? Sorry, I got lost there with the name Morgan and the farmyard theme. Haystacks, playful romps etc.....perhaps a riding crop. Focus Bec. Focus.

'Isn't he handsome.' murmurs this Adonis about Dude - a statement guaranteed to win my approval if not my heart.

Morgan accompanies us to the hydrotherapy pool, as I suddenly remember that I‘m going swimming, with my dog, and this young Adonis is obviously going to be hanging around, and I haven't shaved anything for months (its winter, its warmer with fur).

I decide that I will just keep my yoga pants on. Don‘t imagine it, It will be appalling, but better than the untended look of my lower body.

*Too late....*It was made more wonderful by the extremely uncomfortable and slightly too small turquoise swimming cozzie into which I had squeezed my lockdown body.

Feeling old and yet decisive, Dude and I are shown into the changing rooms - changing rooms with a dog......I ponder on how many owners purchase swimming costumes for the dogs, move on to considering if there is a niche in the market for this, and come to the final conclusion that there isn't. Or possibly is but definitely shouldn't be.

Being unable to stand in the changing room with a now confused and slightly suspicious Dog for any longer, we hesitantly peer into the pool area.

The Adonis is there all smiles and making encouraging noises at Dude, well at both of us really.

Now Dude loves a nice stagnant fetid pool of water, with dead things and mud as a free side. However he isn't so hot on nice water. He takes one look at the pool and turns tail - back to the safety of the changing room.

'Stop embarrassing me you utter puff.' I whisper sibilantly at him.

He utterly ignores me and whines pathetically.

Yes Reader, the Adonis holds a ball up for Dude. Dude LOVES balls..

I love the Adonis.

My idiot dog stops in his tracks - He is (as per the rules) still on his lead at this point.

And then the Adonis throws said ball into the pool. Dude doesn't hesitate at all -
SPLOOSH - straight in... 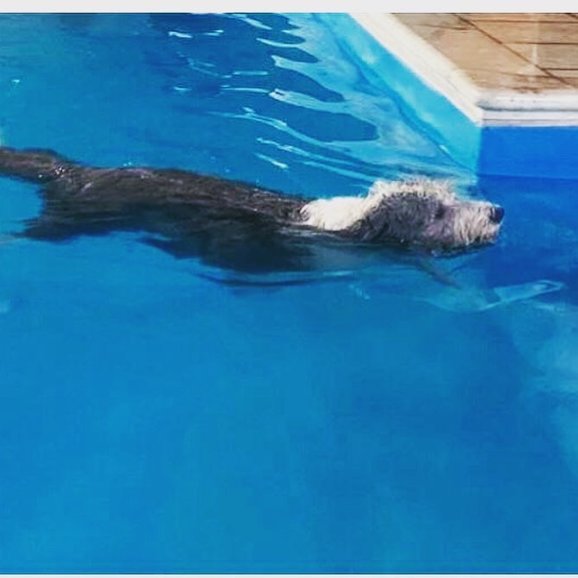 SPLASH I follow straight behind. A slippy floor and a large hairy dog chasing a ball, it was always going to happen.

If only we could have filmed it.

I would have infinitely have preferred to enter the pool via the elegant steps at one end - as ever in my life elegance eluded me....

I emerge from the water - which frankly isn't very deep - (nice and warm though) coughing choking and feeling slightly humiliated.

After I recovered my accustomed poise (or not in truth) we spent a hilarious 30 minutes splashing about and chasing balls.

When we emerged from the pool, I chucked on some dry clothes, toweled the water off Dude - there was a huge doggy hairdryer thing, but my terribly brave German Shepherd wouldnt go near it.. and exited.

After a slight contretemps with a spaniel in the farmyard, I persuaded Dude back into Gertie, and we drove home, accompanied by the happy panting and smell of a very happy soggy doggy. 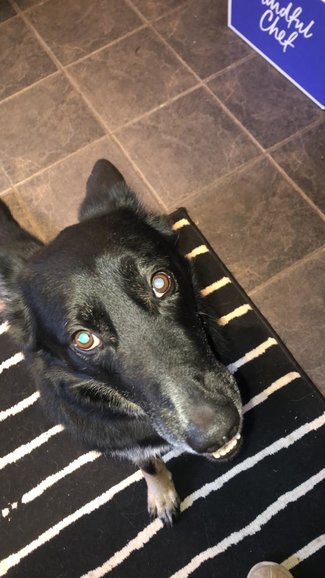 I have rebooked for next month - although I shall be attending to the necessary deforestation for the next visit!

I feel a romance blossoming. No chance whatsoever...I don't think I can remember what to do! 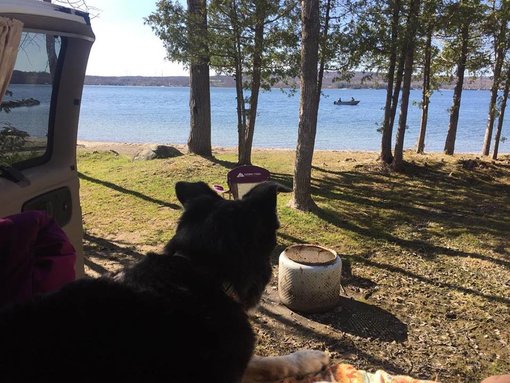 Camping and traveling with your BFF - Best Furry Friend