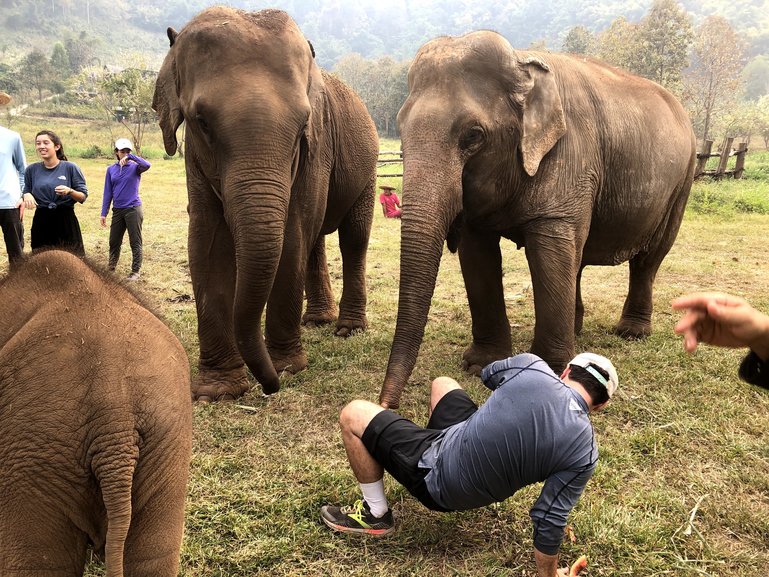 Northern Thailand is home to many amazing places and offers so much to do. You can explore cities, see Buddhist temples, and so much more. However, the best thing to do in your time in and around Chiang Mai is to visit an ethical elephant sanctuary. Due to deforestation and tourism, many elephants have lost their homes. Even worse, (and because of it) many elephants are captive and forced into work. When you see that picture of your friends riding elephants, that is not a good thing. Despite their massive size, elephants can get extreme back pain from carrying people on their back. Elephants are also forced into the logging industry. They have to carry heavy logs and work all day. The worst part is that all of these elephants have been beaten, chained, whipped, and endured even more forms of abuse. They are sometimes chained outside for days at a time without being able to walk or move. Not only is this extremely unhealthy physically, but it is mentally detrimental.

You may have heard that elephants are smart, but it's not until you're up close with them that you see just how intelligent they are. I witnessed an elephant strip a tree branch of twigs and use it to pick in between her teeth. They show favoritism in both other elephants and people. They understand just how big and strong they are and are able to maneuver and interact with humans and smaller animals without injuring them. Elephants also have unique and complex social structures similar to that of wolves, dolphins, and even people. The roles are not simply the alpha and their subjects but different roles and responsibilities that are somehow communicated and given to different elephants in the herd. It's hard to comprehend but I have seen it first hand and it is hard to look at elephants the same way afterwards. 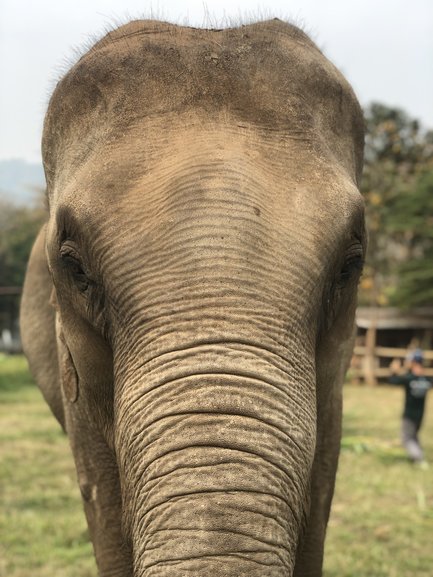 Nothing Beats Being Face to Face with an Elephant

The elephant sanctuaries around Chiang Mai rescue elephants from these terrible conditions and bring them to their facilities. They are deep in the mountains where it is hard for them to cause trouble or have people cause trouble for them. They have open spaces, caretakers, rivers, and lots of things for them to entertain themselves with. The sanctuaries are not perfect, I still face some dilemmas regarding the elephants sleeping in pens and even. allowing visitors at all. However, I understand they are making the best of a bad situation. Elephants are very hard to maintain and even harder to keep in one place. Without them having ways to keep the elephants where they are, they could be poached or captured. Visitors are also necessary due to the lack of donations many places receive. If you thought having a child or a dog was expensive, it's nothing compared to an elephant. A healthy adult. elephant could be $100,000 per year which does not include the cost of rescue and transport to the sanctuaries. All things considered, I don't believe having visitors is necessarily bad. These elephants are actual ambassadors of their species that cannot re-enter the wild. Which to me is a lot better than a zoo capturing wild animals to become an "animal ambassador."

These elephants get another chance at having social interactions with other elephants and won't have to worry about survival or being abused. Most of them generally seem interested in human interaction and those who aren't are not forced to. During your time at these elephant homes you will interact with the elephants, prepare their food, clean up after them (it's not quite as bad as it sounds), wash them off in rivers, and anything else they may need. It may sound like you're paying to do work but it is an amazing experience and it doesn't feel like work at all.

When you meet an elephant, the first thing you'll think about is just how big they are. They may intimidate you and you may even be scared. Elephants are extremely smart and capable of complex thought. Therefore unless you're interacting with a bull during mating season, that elephant isn't going to flip on a dime and make rash decisions. Just remember one thing, if that elephant wants to hurt you, it will. They are not only huge, but extremely fast. So if it wants you dead there's nothing you can do about it. As long as you are respectful and don't try to mess with them, they will not hurt you. So why be scared? Standing ten feet away and standing right next to an elephant isn't going to make a difference so you might as well get the most out of your experience. Elephants understand human facial expressions and body movement too and will likely act accordingly. They can interpret emotions and it is unlikely they would get a false message from you if you mean them no harm. The only exception to this would be baby elephants. Younger elephants (like human children) enjoy playing with anyone they see. They are not smart enough yet to understand their size and strength. While you may get the opportunity to play with them at a sanctuary, understand that they are the only real danger faced in the sanctuaries. Not due to their aggression but simply because they are too friendly and playful. The younger elephants were also likely born at the sanctuaries and thus do not share the same negative experiences with humans that their parents do. They will have zero fear and will come as close (and closer) as you allow them to. Be careful not to be aggressive while playing back with them. If the mother elephant believes her offspring is in any danger, there is nothing that can stop them. So be mindful and try not to yell too much. 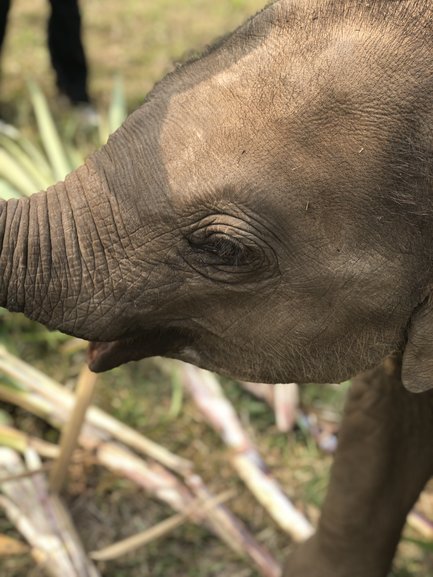 Baby Elephants are so Playful and Cute

While elephants in these sanctuaries are used to humans (all be it mostly in a negative connotation outside the sanctuary), wild elephants are not. Please do not read this and get the interpretation that a wild elephant has the same understanding of humans that captured and rescued elephants do. Approaching wild elephants whether in Asia or Africa is extremely dangerous and they will likely read you as a threat. While it would be nice for all elephants to be wild like this, it is nice for us that we get to interact with elephants without any real risk of danger.

Many of these elephant sanctuaries are struggling especially due to lack of tourism from COVID. If you want to help or visit any of these places, visit one of the links below of find a different elephant sanctuary in Northern Thailand. Make sure to do your research on their ethics/treatment of the animals and that there are no rides offered in the sanctuary.

My name is Blake. I am currently a university student in the United States. I've been fortunate enough to have had some amazing experiences around the world and I want to not only share them with you, but help you enhance your travel experiences through the knowledge I've gained. I started Exploration Always to help achieve this and make everyone who wishes to be, an expert world traveler. 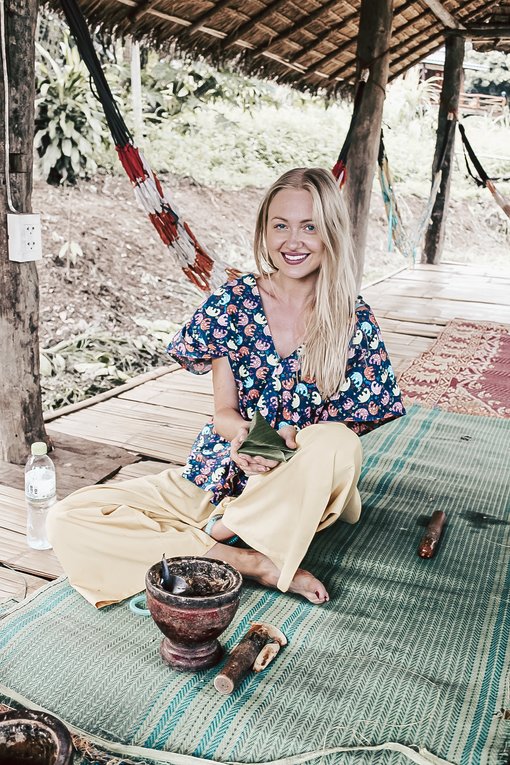 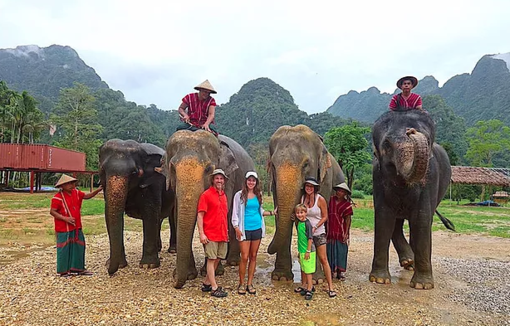 Interacting with Elephants in Thailand

The perfect 3 Day adventure for all visitors travelling to the North of Thailand – mountains, hill tribes, jungle cooking, trekking, off-the-beaten track destinations and, of course, the thrill of driving your very own Tuk Tuk!

Dress to impress then sop up the glamor and glitz of Pattaya’s legendary drag queens at the elegant Alcazar Cabaret. -Skip the lines to enter the Alcazar Cabaret with discounted prices -Enjoy one of the most famous cabaret shows in Pattaya since 1981 -Experience the magic of Alcazar's quality lighting system and grand stage setting