Bored of Sydney? Come On Down to Wollongong

Wollongong is one of those towns that many Sydneysiders know of, but haven't spent long in. What a shame!

Wollongong has a lot going for it — beautiful coastlines, scenic mountains, a fast-growing food scene, cultural landmarks, one of Australia's best live music scenes, and one the world's most iconic roads. Don't believe me? I've written you a little itinerary of five things to do in one day at Wollongong, and this list doesn't even include surfing or skydiving.

At about 10 minutes outside the centre of the Gong, Nan Tien Temple is a popular spot for tourists and locals alike.
You're free to walk around the grounds, check out the temple, climb the stairs, and wander through the gardens. You can also take guided tours around the temple or participate in classes on meditation and Buddhist spirituality. It's an unexpected slice of peace in an already pretty peaceful coastal town.

Yes, I know it sounds like I'm just telling you to drive along a road. But anyone who has been on the Sea Cliff Bridge knows it's well worth the trip.
Even if you've never been along the bridge, you've probably seen it before and won't be able to unsee it now — plenty of commercials are filmed on the bridge, it's often posted on travel blogs, used in stock photos, and even a movie or two have shot scenes on the bridge. I hired a sports car in Sydney and made the trip down to the Gong in August after seeing it appear on two of my friend's Instagram stories — totally worth it for the clout.

3. Fish and Chips from Lavendi

It is my firm and unmovable personal opinion that there is no better fish and chip shop in Wollongong than Lavendi. Dont @ me, just accept it. Do not even mention North Kiosk in my presence unless you want to hear a rant about their frozen calamari.

If you've never been, you can expect fresh fish, killer salt and pepper calamari, a nice view over the water and the Flagstaff Hill Lighthouse...and a bit of a wait. Yes, Lavendi's reputation precedes them so there can be a bit of a wait for food on busy days. Just listen out for your number and don't let some pelican (literal or figurative) nick your order.

Okay, okay. I know this is a bit of an odd one — but who doesn't enjoy seeing dogs have the time of their lives?
Located just a few minutes from Wolllongong's main human-friendly beaches, North Beach and Austinmer Beach, Little Austinmer dog beach has it all (if you're a dog). Great places to throw the ball, rocks to climb on, friends to make (i.e. butts to sniff), waves to frolic in. It's a hell of a time for dogs and humans alike and worth checking out

It is almost unfair how good the live music scene in Wollongong is. On top of spewing out top Aussie acts like Hockey Dad, the Gong also has one of the East Coast's best rosters of live music going on at UOW's UniBar. The scene is pretty quiet in 2020 because of you know what, but some of the acts I've seen there include San Cisco, Last Dinosaurs, Allday, Client Liaison, Hermitude, and The Rubens. And tickets are cheap as chips too — less than a couple of beers (which I'd recommend having since it's a uni and everyone else certainly will be).

If you've never been to The Gong, hopefully this little guide can help convince you. Check the weather before you head down, because blimey when the weather is good down there it is good! Let us know your thoughts and any recommendations of your own that you'd like to share.

Hi, we love travel and want to share some of our favourite experiences around Sydney, Melbourne, and Brisbane. 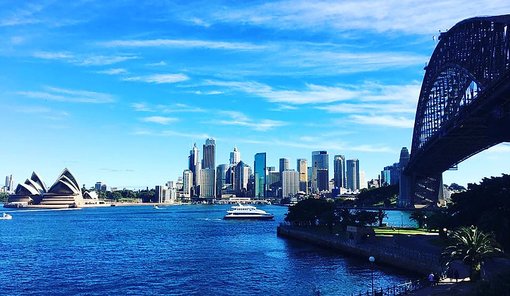 Chill out in Byron Bay