The third city where we have lived and the one we will speak about, is the oldest in Australia.

Often mistakenly exchanged by people for the capital, because is the largest and most famous (although the capital is Canberra) could be a great place to start your adventure on the edge of the globe. Are you wondering why?

Because job opportunities are never lacking here! Whether it is winter or summer, there will always be a demand for work, whether you already have a good level of English, which will certainly give you more opportunities, whether English is not that good yet, thanks to the large number of Italians present in the city.

Ale's first experience in this metropolis dates back to 2016, and after coming back together in 2019, he noticed a frightening peak on rents and the cost of living, although salaries also rose slightly, making this gap less excessive. What is certain is that if you think that Sydney is all roses, you could be wrong.

More than all other cities, life here is based on business, where everything turns out to be perhaps too fast, too hectic, and the days seem to end in a flash.

Despite this, one cannot help but hide the fact that thanks to its charm, you can throw everything behind you once you arrive at Circular Quay, where you will find the two symbol icons.

What are we talking about? 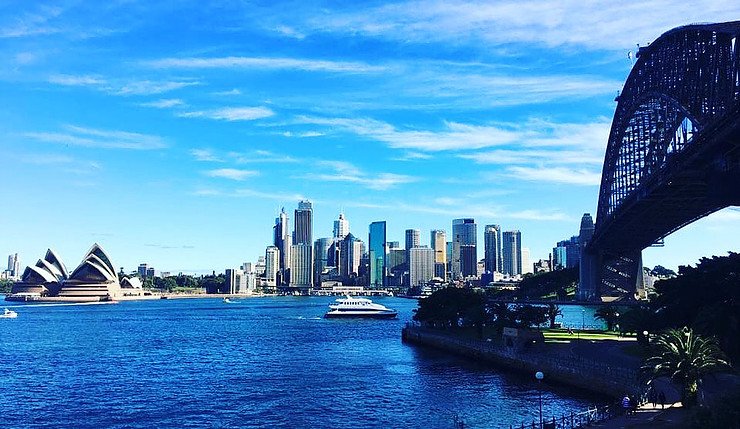 Besides being the metro stop that will take you directly to the bay, it is one of the most touristic and well-known areas of the city. One of the first things you will notice once you arrive, is the impressive Harbor Bridge, the bridge that everyone relates when it comes to Sydney, where the highest point is 134m. If you decide to continue your walk on the right of the bay, among restaurants, pubs and cafés you will finally arrive at the Opera House, the icon par excellence not only of this metropolis, but of all of Australia. Curiosity: Did you know that it is composed of 14 spherical-shaped shells, which for some critics seem to remember the flotilla of sailboats that cruises in the Australian seas? Incredible right? A true wonder. Once in front of it you will be amazed by is beauty. If like any self-respecting tourist, you will want to take pictures, our advice is to go there at sunrise. We know it, it is tough to get up early just to take pictures, but believe us, at that time of the day, the Opera House is deserted, perfect therefore for memorable shots, thanks also to the colours of the daybreak.

If instead you decide to continue to the left of the bay you will come directly to The Rocks, one of our favorite neighborhoods, for style and architecture, as well as the oldest settlement in the city where you can touch the history of Sydney.

Every weekend in this charming place, you will find The Rocks Market, from Friday to Sunday, where you can lose yourself among street food stalls, handmade items and trinkets in the various streets of this mainly European-style neighborhood. Absolutely a MUST!

One of the places that not everyone knows exists, but that really deserves a visit, are Wendy's Secret Gardens. They are located in Lavander Bay, in the north of the city. Getting there is quite simple, just take the metro and get off at the "Milson Point" stop and in about 10 minutes walk, immediately after the Luna Park, on the right, you will find yourself in this peaceful and enchanting park that will make you forget about the city chaos . One of the particularities of this garden, besides being terraced and surrounded by flowers of every color, palms and imposing trees, are the different tables and benches that offer the possibility of relaxing in the cool and among the scent of roses, while admiring the different statues that frame the whole. After relaxing, our advice is to return to the road you came from and admire the Harbor Bridge from one of its best prospects, the one from Lavander Bay, right next to Wendy's Secret Gardens, which comes to life at sunset with breathtaking colours .

How could we not talk about Bondi Beach, the most famous beach in Australia, for the constant presence of surfers who find themselves fighting against the force of the Pacific Ocean's waves all year round? 1km long and bounded on the sides by two cliffs, on a scale of 1 to 10 due to its dangerousness, the studies gave the grade 7 for the southern part and 4 for the northern part of the beach, but there is not too much to be worried about , since, in addition to being always safeguarded by the beach guards and lifeguards, during the summer period, a shark-net is added along the entire southern area. And this is where you will see yourself face to face with the Australian dream.

Once in Bondi Beach, therefore, you will not be able not to take advantage of a surf lesson, where you can experience the feeling of being transported by the incredible strength that Mother Nature releases with its waves, and having the chance to learn from the best surfers in the world.

Another point of great interest not to be missed right next to the beach, in the southern area, is the Bondi Iceberg Club, a swimming pool built directly on the cliff, of a special charm where you can see the waves crashing directly into the pool.

And if, after a day of relax, you start to get a little hungry, you can go to the main street that follows the coast, and you will be spoiled for choice among restaurants of different ethnicities, thanks also to the great immigration of the last years.

But Bondi Beach is not just beach and surfers, in fact a must-see is the walk along the cliff that will take you from Bondi to Coogee Beach. About 6km of scenic route which passes between cliffs, beaches like Tamarama and Bronte Beach, through the path created specifically for pedestrians. At a certain point of the path you will find yourself walking in a cemetery, and even if it will seem a little macabre to you, do not lose heart, because soon after you will see colors and cliffs that will make you forget everything in the blink of an eye . 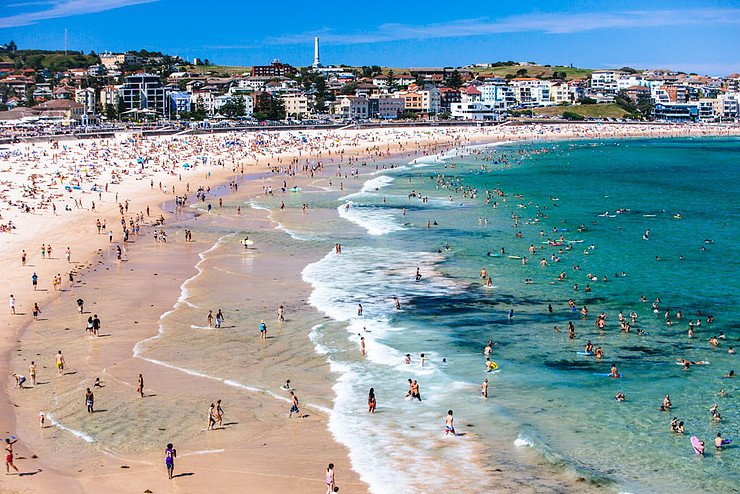 If you are a lover of height or want to experience the thrill of feeling to be on the top of the world, you should definitely visit the Sydney Tower, the tallest structure in whole Australia, which with its 309m stands out above every other building in the city. The price to pay to get to the observatory is $25 AUD and once you get into the elevator in less than 50 seconds you will reach the height of 250m.

At the top of the tower you will find a souvenir shop and a bar, certainly not very cheap, but what a price it is to have a drink on top of the tallest building in the land of kangaroos from which you can see the entire city 360˚ and get lost in the horizon's colours ? 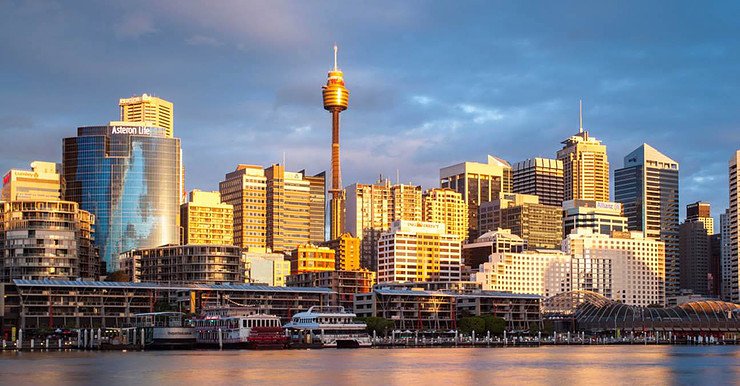 The last place we recommend to visit before finishing our article is Darling Harbor, one of the most popular and richest areas of the city. A destination for all tourists, but also very appreciated by the local people, in this neighborhood you will find many of the most famous and renowned restaurants of the metropolis, as well as the inevitable Hard Rock Cafe. The Darling Harbor is also home to attractions such as the Casino, the Aquarium and the Chinese Gardens which, for the modest sum of $ 6AUD, will transport you back in time, in what was the golden age of the Chinese empire.

Also every Saturday, at 8.30 pm, you can watch a fireworks display lasting about 15 minutes, which really deserves to be seen. And if you go on the pedestrian bridge that connects the two ends of the bay, you can watch the show with the backdrop of the city to frame everything. 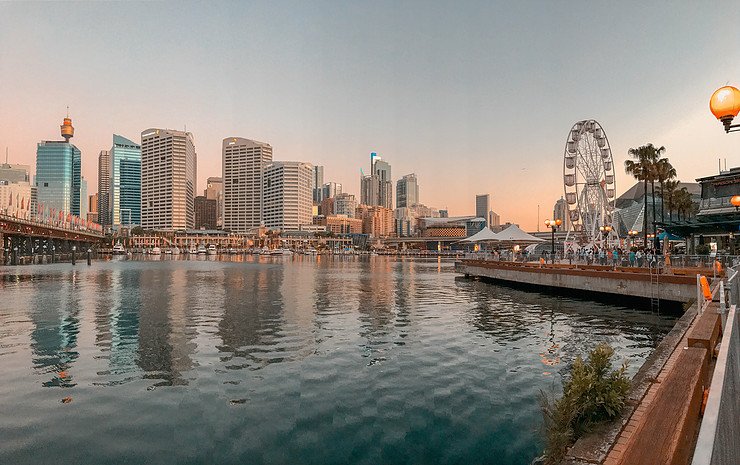