The train is one of the fastest and easiest ways to get to Katoomba from Sydney, and we would certainly recommend it as the most convenient and eco-friendly mode of transportation. Most of our adventures are scheduled to start so that they roughly suit the train timetable. Direct trains to Katoomba depart Sydney Central station about once an hour (up to every 30minutes in peak hour), and run all day and most of the night. Trains that go to Katoomba may also be listed as terminating at Blackheath, Mt Victoria or Lithgow.

The total travel time is about 2 hours. There are toilets on the train, and we would recommend taking some snacks and your water bottle with you for the journey.

If you do catch the train, we recommend getting a seat upstairs, on the South side of the train (left hand side as you leave Central). The first hour of the journey is through the outskirts of the city and the suburbs of Western Sydney. After about 45minutes you will cross the Nepean River which will signal the start of the foothills of the Blue Mountains, and your ascent of about 1000m (3300feet) to Katoomba. Keep your eyes glued to the window as the train winds its way above the spectacular Glenbrook Gorge, and continue to soak up this unique landscape as the train provides you with vistas south across the Blue Labyrinth: south into the wilderness for over 100km. As you get higher in to the mountains you will start getting glimpses of the vast blue hazed eucalypt forests, and famous cliff walled valleys, before alighting in Katoomba.

To find out the latest timetable and fare information (including any service interruptions or planned maintenance), phone 13 15 00, or go to www.transportnsw.info

The directions to drive from Sydney City are not particularly complex: once you are out of the CBD, start following signs to Parramatta, Penrith or Katoomba and make your way on to the M4 motorway heading west. After about 50minutes you will cross the Nepean River and the foothills of the Blue Mountains will be rising in front of you and you will begin your ascent to Katoomba at 1000m (330feet) above sea level.

After crossing the Nepean River the M4 soon changes its name to the Great Western Highway and ambles its way past many of the villages of the Blue Mountains. Travel time from Sydney to Katoomba is approximately 2 hours, but can be much longer if there are road works, or if you travel on public holidays or during peak times. If you leave the city before 7am (arriving Katoomba before 9am), your travel time may be a little less.

There are a number of transport providers who do transfers from Sydney to the Blue Mountains. Some of the experiences are quite unique and depending on your interests and your budget you can travel by coach, smaller buses, limousine, motorbikes, or even helicopter. Ensure that whichever option you choose can get you to your adventure experience with us on time!

Transport options whilst in Katoomba and surrounds

* The train is a convenient way to travel between the villages of the Blue Mountains. To find out the latest timetable and fare information, phone 13 15 00, or go to the Transport for NSW website.
* Hertz is the only car hire company in the upper Blue Mountains and is reasonably close to Katoomba and Leura Train Stations. A hire car is a great option if you have made your way to the Blue Mountains by train.
* Taxis are common in Leura and Katoomba but are a little harder to come by in some of the other villages.
* The Blue Mountains Explorer Bus is a hop on/hop off service that services the villages of Leura and Katoomba, including all the major tourist attractions, most of the major accommodation providers and some fantastic lookouts and walks. The tickets are valid for a full week so if you are staying for a few days they are excellent value.

If you are only staying for a short time in Sydney or won’t be utilising public transport very often then paper tickets are the best way to go. Most paper tickets can be purchased at the time of travel and some tickets can be purchased in advance (Prepay), from ticket outlets that include news agencies, convenience stores, selected post offices, shops and kiosks. Some bus services require pre-purchase of tickets before boarding.

If you are going to be in Sydney and surrounds for more than a few days and using public transport during your stay, then an Opal Card is definitely worth considering. Much like the “Oyster” card in London, Opal is an electronic ticketing system that is convenient for all transport modes - trains, buses, ferries and light rail - in Sydney, Blue Mountains, Central Coast, Hunter, Illawarra and Southern Highlands.

You can get an Opal card from:

To find out more about ticketing go to the Transport for NSW website.

The climate of the Upper Blue Mountains is somewhat cooler than the lower Sydney region. With Katoomba being 1030 metres (3380 feet) above Sea Level, temperatures are often up to 10°C lower than Sydney. During the winter months the average temperature in the Upper Mountains is around 5°C (41°F), while in Summer the average daytime maximum temperature is around 23°C (73°F) but climbs in to the 30’s (90°F+) occasionally.

The Blue Mountains has a similar rainfall to Sydney, with the Upper Blue Mountains receiving an average of around 1050mm (41inches) per year. The summer months typically bring afternoon thunderstorms, and winter rainfall is more persistent drizzle. The upper Blue Mountains also occasionally experiences snowfall, but despite the cool temperatures there are rarely more than 5 snow days per year.

Please be aware that our weather patterns all year around can be unpredictable and may change suddenly. 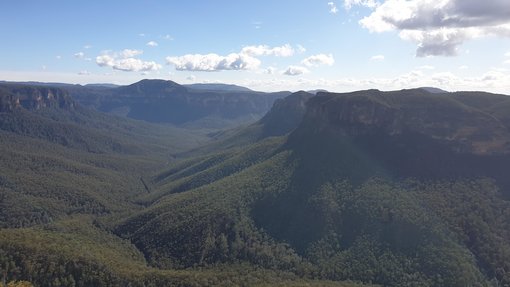 One Day in Australia's Blue Mountains

Strolling Down the Streets of Scintillating Sydney 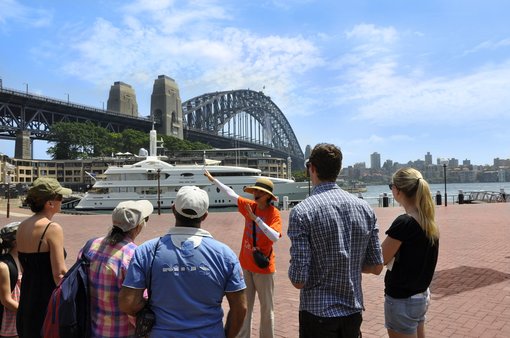