Finding views over a city from somewhere high or a nice cityscape is one of my favourite things to do when we visit somewhere new. I love getting a new perspective of a city. It also can make you walk out of the downtown region so you get a feel for the suburbs rather than just the touristy centre.

A lot of cities now have skyscrapers where you can pay for the view, but my favourites are always the hidden treasures which are cheaper or free!

Here are some of my favourite alternative, cheap or free views that I’ve discovered in cities across the world!

Seattle, Washington - Instead of the Space Needle, try Kerry Park

I’ve only managed to get to Seattle on a day trip from Vancouver, and can’t wait to visit this beautiful city again! While I was there I visited the iconic Space Needle. The views over Seattle were incredible, particularly over Mount Rainier in the distance. But, one thing that was missing was the Space Needle itself. Later in the day I walked out of the city centre over to Kerry Park. From here you get the most amazing (free!) cityscape views of downtown Seattle with Mount Rainier in the background. Although I loved the Space Needle, if I had to choose one Kerry Park would win every time. 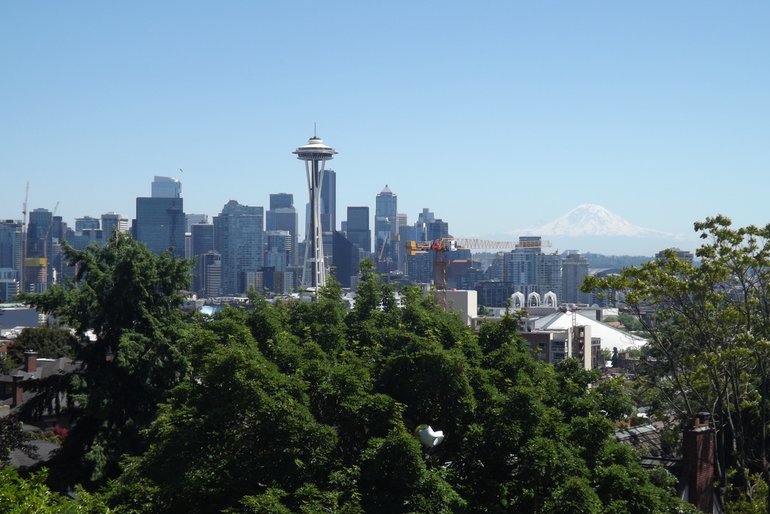 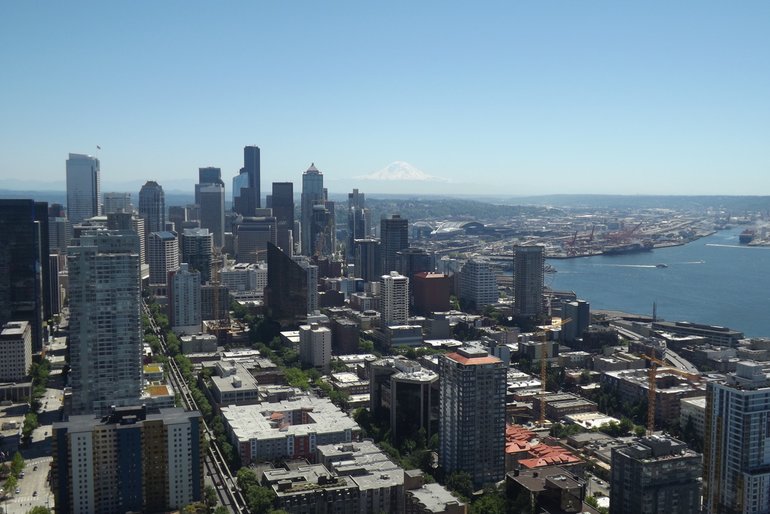 View from the Space Needle

Before getting to Santiago I was so excited to go to the top of Sky Costanera as it’s the tallest building in Latin America. But when we got there I was disappointed to see that it is quite a way out of the main city centre and admission was pretty pricey.

We decided to take the teleferico up Cerro San Cristobal instead and I’m so happy we did. From here you get amazing views over central Santiago and the Andes (and a teleferico ride!). This was one of my favourite things we did in Santiago so I would definitely recommend it! 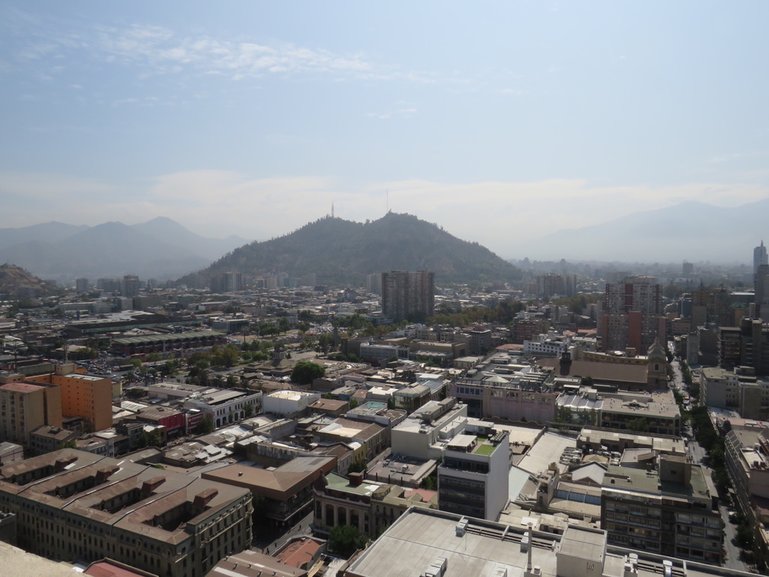 Chicago, Illinois - Instead of the 360 Chicago Observation Deck or the Skydeck, try Cindy’s or Alder Planetarium

The first time I visited Chicago I went up the Skydeck in Willis Tower and I have to admit, the view was amazing. But it wasn’t cheap! And there are lots of other free and amazing views over beautiful Chicago. Some of my favourites are from Cindy’s and from outside Alder Planetarium.

Cindy’s is a bar right on Michigan Avenue overlooking Millennium Park and Cloud Gate. Drinks here aren’t cheap but there is a balcony which gives amazing views over the park and Lake Michigan. We loved that instead of just paying for the view, you can get a cocktail with a view thrown in!

One evening I walked over to Alder Planetarium and sat by the shores of Lake Michigan to watch the sunset. It was an amazing cityscape view of Chicago and the most perfect (and free!!) place to watch the sunset. This is one of my must-sees in Chicago, whether you’re on a budget or not! 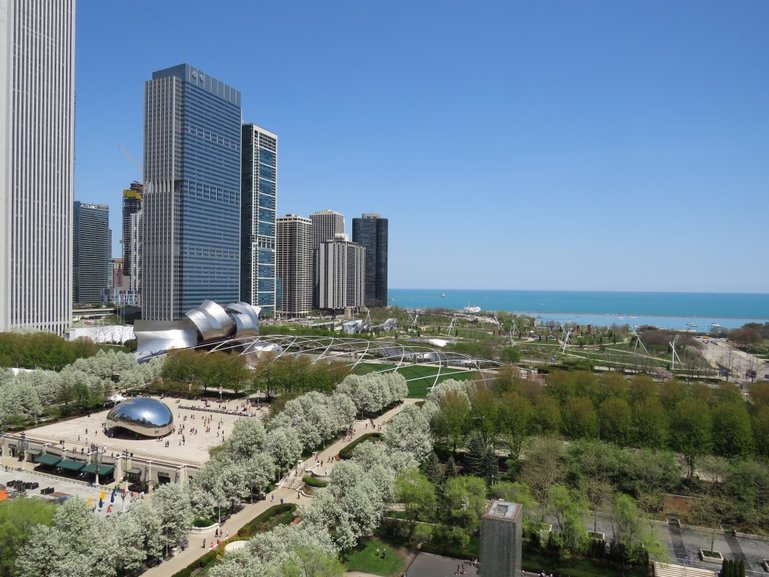 View from the balcony at Cindy's 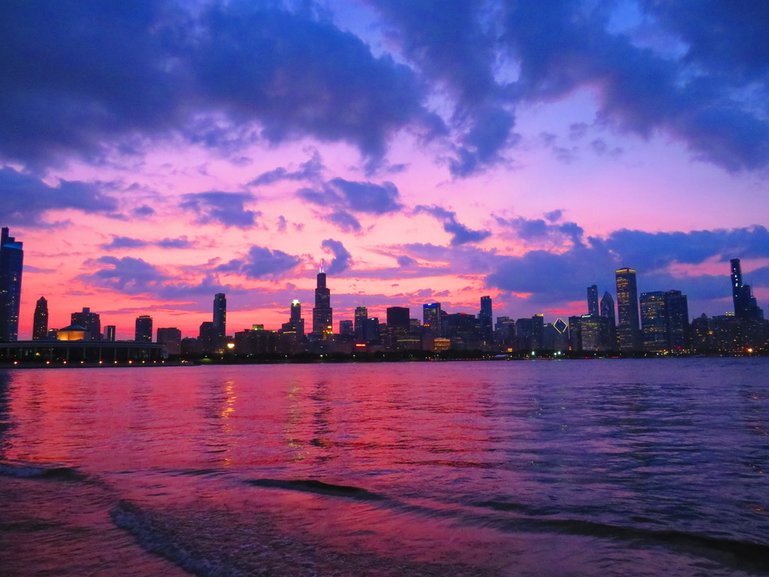 Toronto, Canada - Instead of the CN Tower, try the Toronto Islands

I was so tempted to go to the top of the CN Tower for views over Toronto but was put off by how expensive it was. And, from the top of the tower this iconic building wouldn’t be in the view. So instead we tried to find city views which included the CN Tower. My favourite was from across the water on the Toronto Islands.

From the Jack Layton Ferry Terminal in downtown Toronto, the islands are a 13 minute ferry ride across Lake Ontario. From here you get the most amazing cityscape views of Toronto, and it was so peaceful there! Definitely my top thing to do in Toronto! 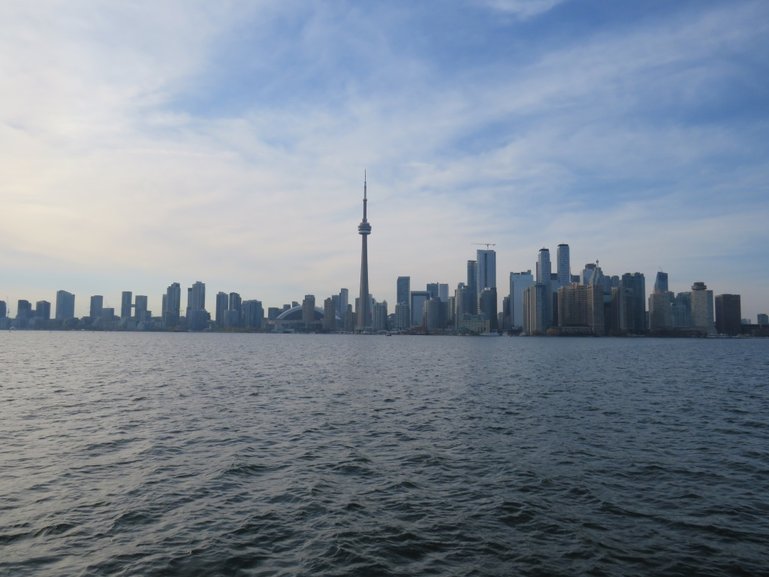 View of the Toronto skyline from the islands

Bogota, Colombia - Instead of Cerro Monserrate, try the Emerald Museum

For me, one thing better than a good view is a good view and a teleferico. So, I was very excited to go to the top of Cerro Monserrate in Bogota. Although the views from the top were nice, it was quite hazy across the city so it wasn’t as good as I had imagined.

Instead, my favourite view over Bogota was from the Emerald Museum. From the lobby of the museum you get great views across central Bogota. The museum itself was really interesting too, so well worth a visit! 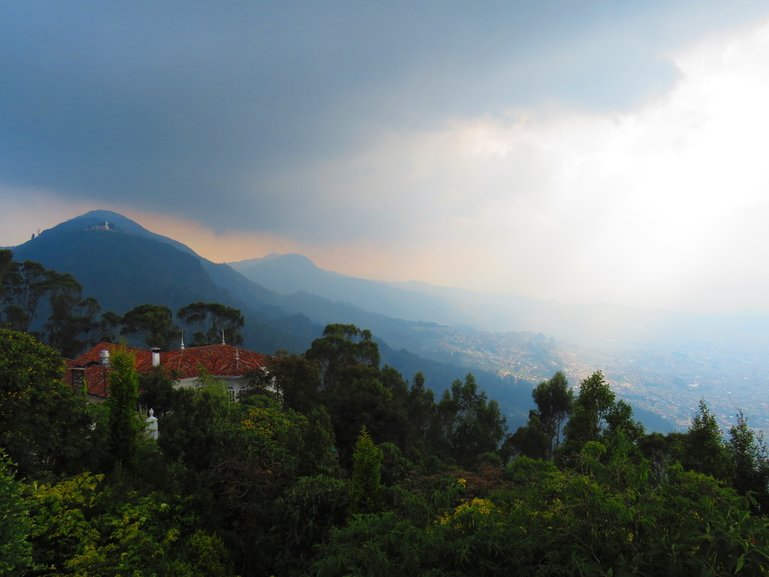 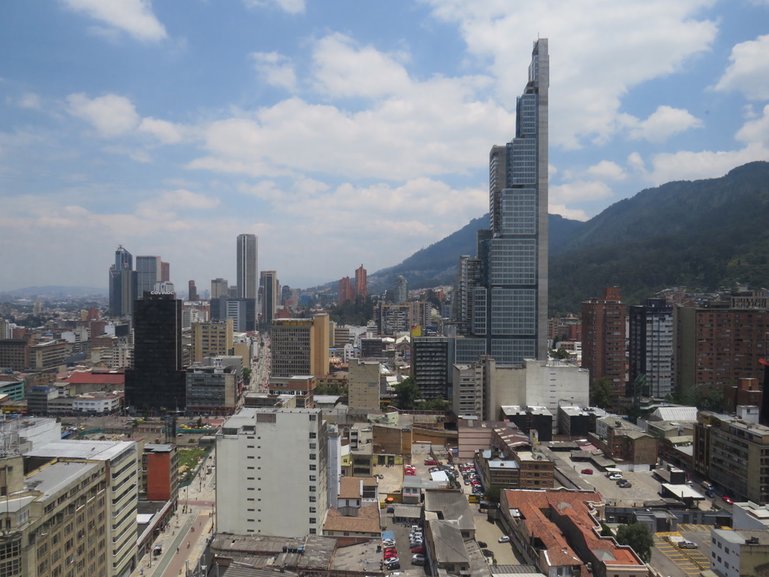 City view from the Emerald Museum

Ho Chi Minh, Vietnam - Instead of the Saigon Skydeck, try views from the EON Heli Bar

It’s hard to miss the Bitexco Financial Tower in Ho Chi Minh – it’s one of the tallest buildings in the city and has a very distinctive shape. Once I realised that its unusual shape was due to a skydeck viewing platform, I was very eager to go up! The Saigon Skydeck is up on the 50th floor and you get panoramic views across the city.

But, we decided to save the $9 entry fee and instead spend it on a cocktail two floors up. The EON Heli Bar is on the 52nd floor of the same building, and offers equally amazing views across beautiful Ho Chi Minh. It was a great to admire the views while enjoying a cocktail! 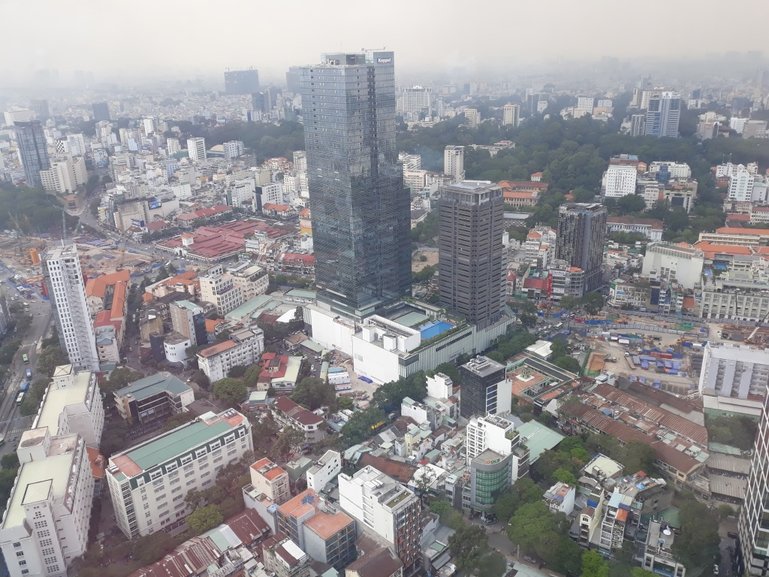 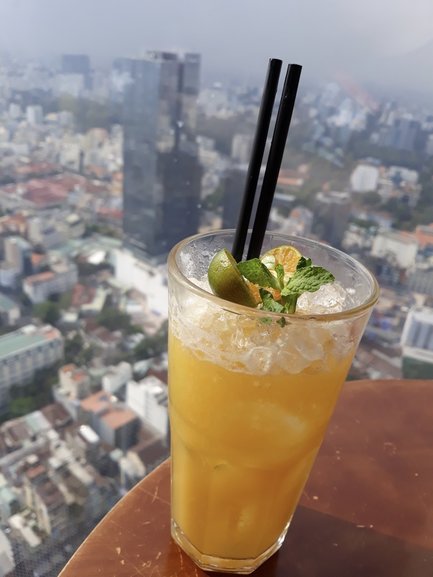 Cocktail with a view

London, England - Instead of the Shard, try the Tate Modern

The Shard is a relatively new skyscraper in London, and is one of the tallest in Europe. It has fast become an iconic part of the London cityscape. With a triple-height viewing gallery, it is renowned for being the best view over the capital. However, it isn’t cheap. At £35 (about $44 USD) a ticket, it’s quite unaffordable for many of us.

So instead, I visited the Tate Modern. Although nowhere near as tall as the Shard, the view from the viewing platform is incredible. What makes it even better is that it’s free! And you get to see some beautiful art on the way. Even though I’ve visited London many times, this was a recent discovery for me and a great addition to my London favourites! 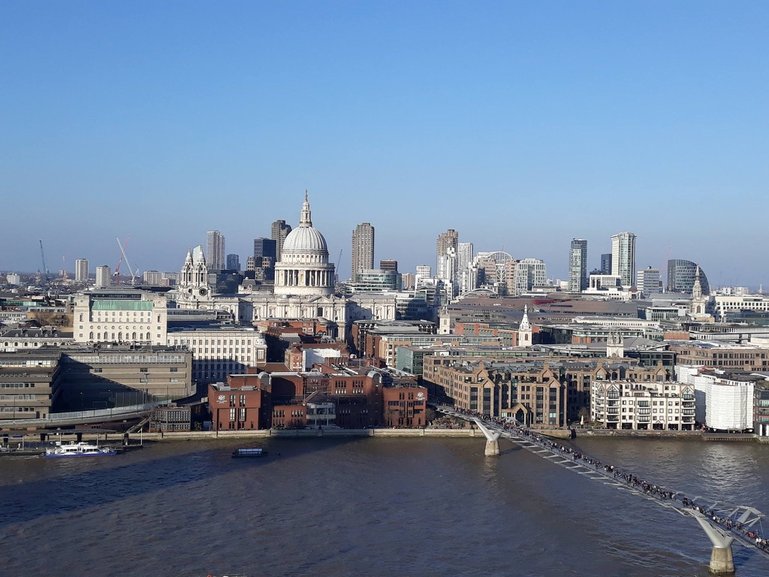 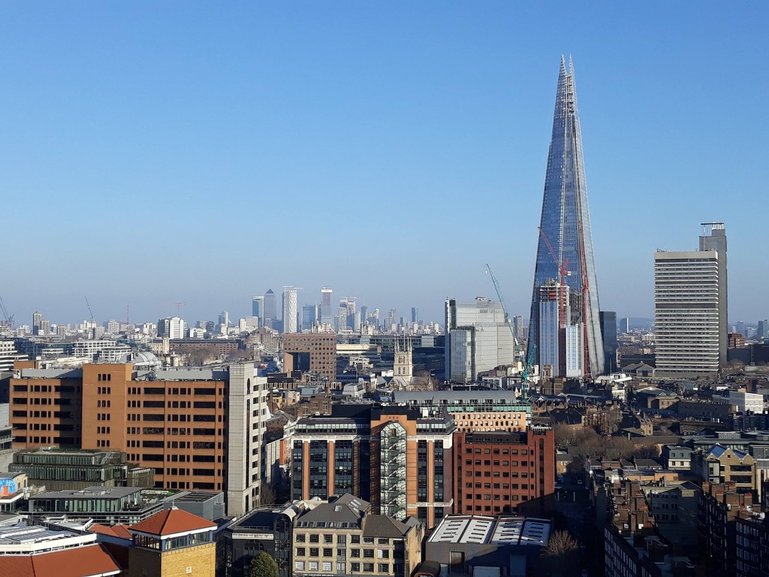 The Shard in the London skyline

Porto, Portugal - Instead of Clerigos Tower, try the views from Luis I Bridge

It’s pretty hard to miss Clerigos Tower when you are walking around Porto. You can take the 240 steps to the top of this beautiful Baroque tower for views over the city. But, we decided to save the €6 entry cost.

Instead, we walked across the Luis I Bridge. From the bridge there are picture perfect views over the Duomo River and the Ribiera region. Just across the bridge in Nova de Gaia is also an amazing place to watch the sunset over Ribiera. 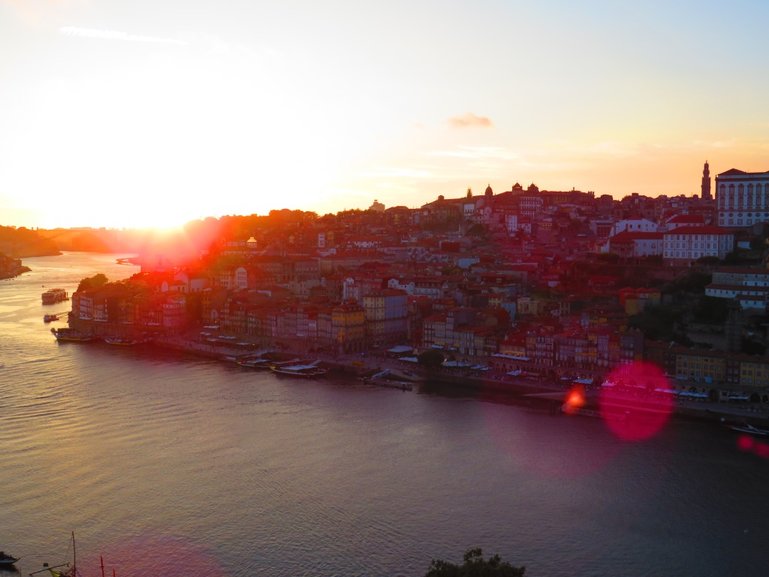 Sunset from the Luis I Bridge 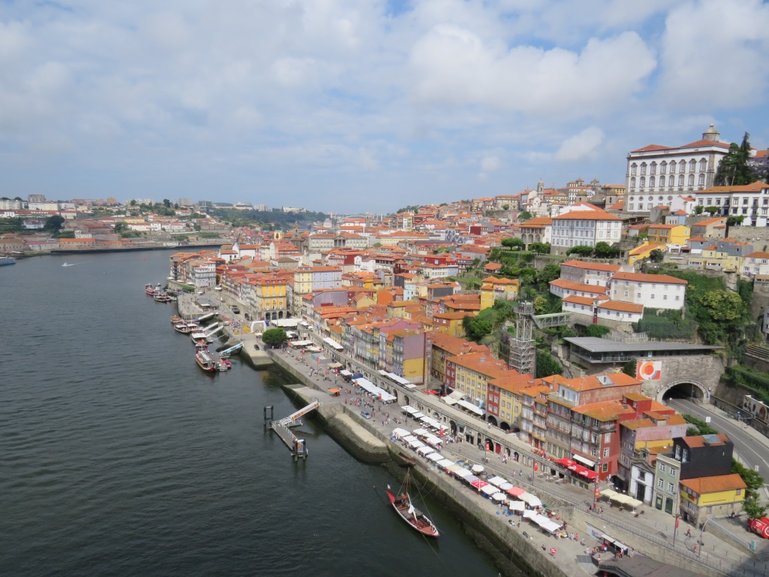 Indianapolis, Indiana - Instead of the Soldiers and Sailors Monument, try the City County Building

I tried a few times to go to the observation deck at the top of the Soldiers and Sailors Monument. It was closed every time. This inspired me to look for alternative views over Indianapolis.
My favourite was from the City County Building. There is a free observation deck with amazing 360 degree views over the city. It’s open Monday-Friday 10am-3pm. When I visited, I was the only one there so I could spend as long as I liked admiring the view! 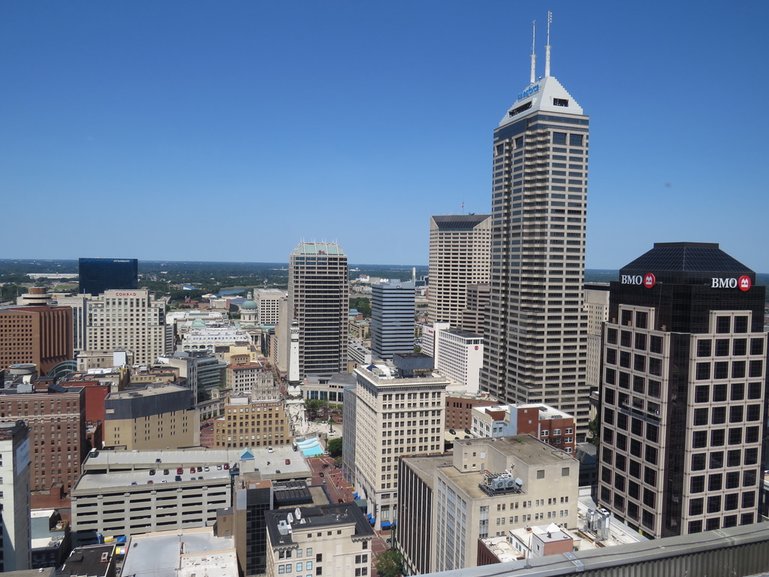 Berlin, Germany - Instead of the TV Tower, try views from the Park Inn Hotel or the Victory Column

I was a little dubious about the Park Inn Hotel viewing platform because I couldn’t find much information about it online. When we arrived I wasn’t sure if it really existed but as as it was only €4 we thought why not! It was quite small, and very chilly by the time we got up there. But, the views were definitely worth it!! What made it even better was that the iconic TV tower was the main feature; what put me off going up that was that it would be missing from the skyline view.

Another budget view in Berlin was at the top of the Victory Column. It stands where all the roads converge in Tiergarten park. The park itself is beautiful and is probably the most famous of all of Berlin’s parks. Similar to Central Park in New York, it’s huge (500 acres) but is right in the middle of the city centre. It’s only 3€ to climb the 285 steps to the top of the Victory Column and you get great views over the park and Berlin. 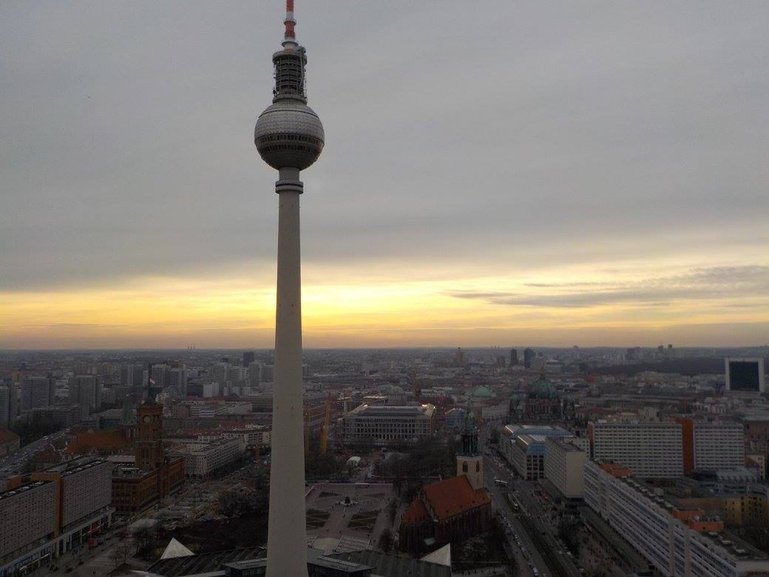 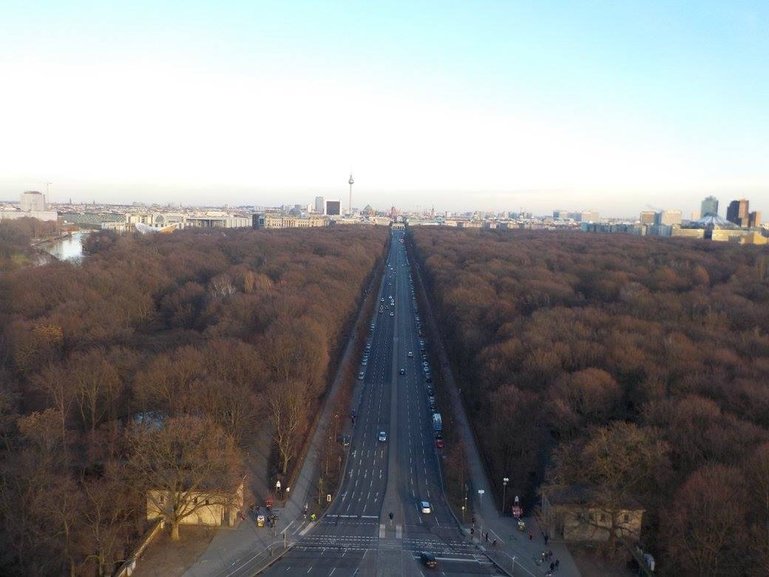 Tiergarten Park from the top of the Victory Column

Helsinki, Finland - Instead of the Skywheel, try the views from the adjacent viewing deck

While I was in Helsinki, there were a lot of people paying to go on the Skywheel for views over the city. Instead, I walked up the steps right next to the Skywheel to an area with deckchairs. You could relax on these with a great view over the city skyline. It was the perfect place to watch the sunset. There were also three different pools here that you could use: one warm, one cold and one with seawater. I hadn’t thought to bring any swimming stuff so didn’t give these a try but loved watching the sunset over the city from here. 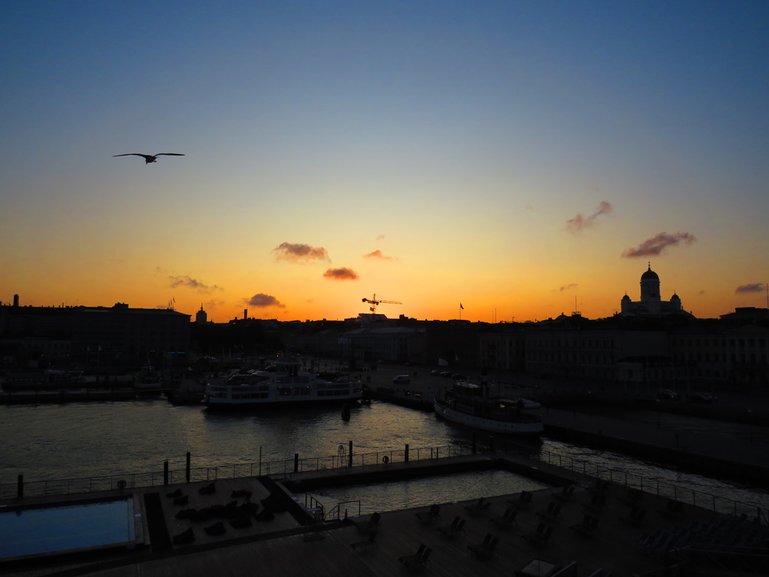 Sunset skyline from the viewing platform

This one is cheating a little because both options are quite pricey but when we visited Rio earlier this year, we spent ages trying to decide between Cristo Redentor and Sugarloaf Mountain.

In the end we settled for Sugarloaf Mountain because then we’d get Cristo Redentor in the view. I have absolutely no regrets with this choice. The view was simply incredible. From the top of Sugarloaf you can see all along the Rio coastline, downtown Rio and Cristo Redentor in the distance. It was picture-perfect and I couldn’t recommend this more! 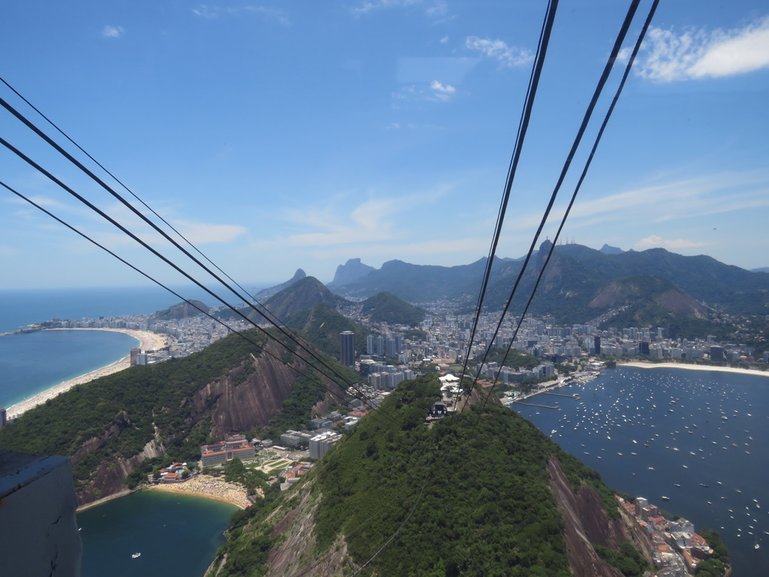 Going up Sugarloaf in the cable car 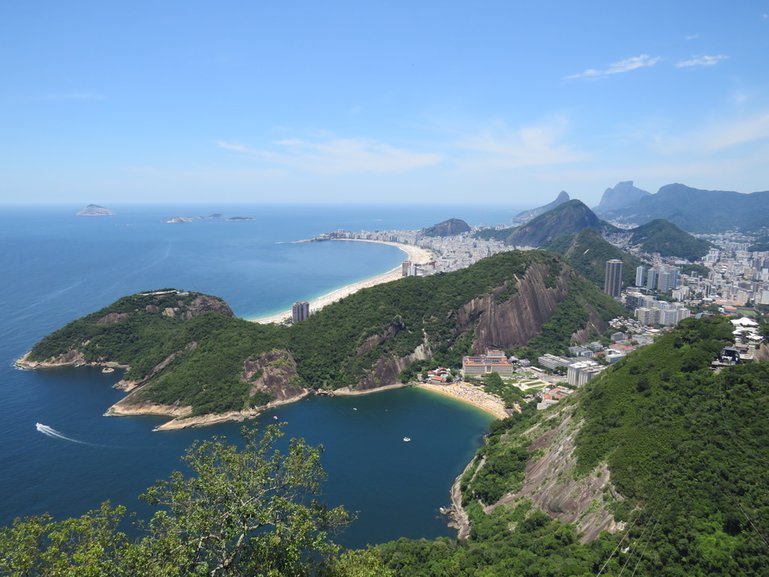 I’ve loved discovering some of these cheaper and less popular views in different cities! It’s taken me out of the main downtown areas and let me explore more of the countryside and suburban parts of cities which I’ve loved.

Seeing cities from different perspectives helps me to get a better feel for the place. I’d love to hear about any hidden or off-the-beaten track views you have discovered on your travels!

Hi, I’m Natalie! I love to travel, to research travelling and thoroughly overplan trips to make the most of every second spent away! On my site I share a mixture of day-by-day itineraries, hints and tips about what to avoid and what not to miss, along with some stories of my recent adventures. Most of all, it’s for people like me, who love to travel but also love to be at home. Let me help you maximise every second of your holiday! 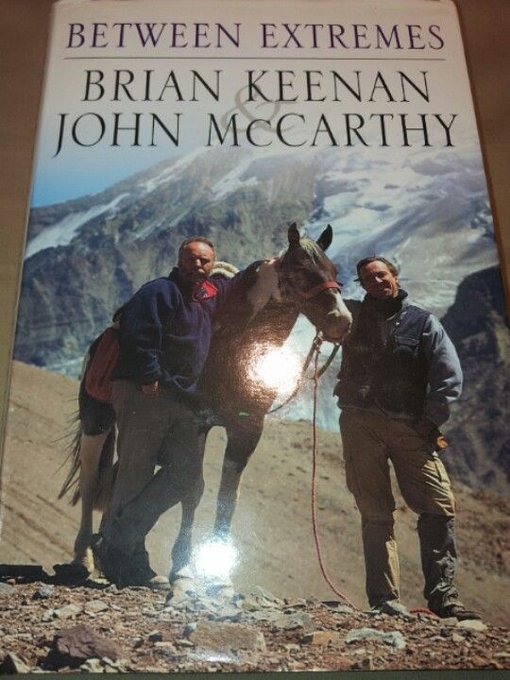 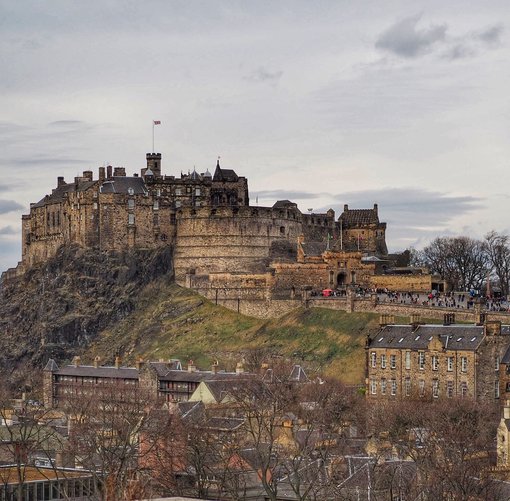 Where to Find the Best Views of Edinburgh Castle