With a great Lake Taupo and the mighty Waikato River here, there is plenty of ways for you to get on the water.

A definite must do in Taupo on any evening is a stroll down to the lakefront and watch the sunset over the mountains. The light show goes on for about a half hour after the sun has set and the colours that Mother Nature puts on are amazing. 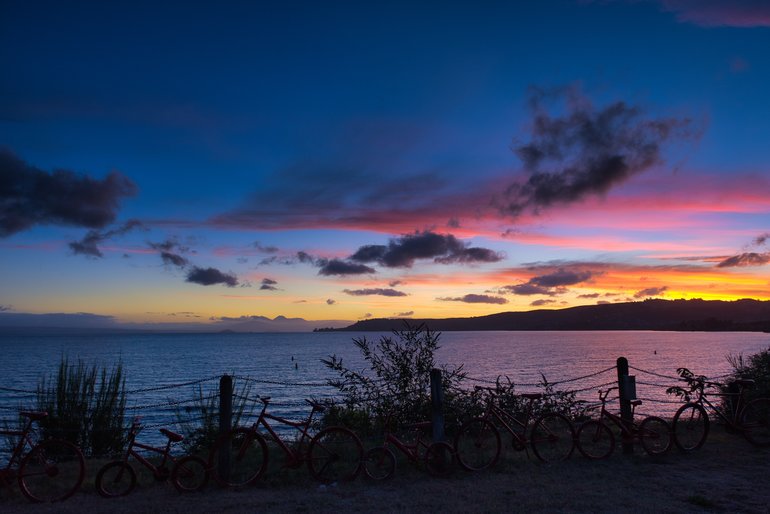 The sunsets over Lake Taupo rarely let me down. The colours are amazing

On Lake Taupo, I did the Ernest Kemp cruise. With covered seating inside, to protect you on those not so pleasant days or you can enjoy the sun and the views outside, up front or on the back, on a good day. Free Wi-Fi, postcard, tea, coffee and cookies are also on board as well as the commentary of the area you are in, the history and what it’s like now as we motor in the bays along the foreshore. 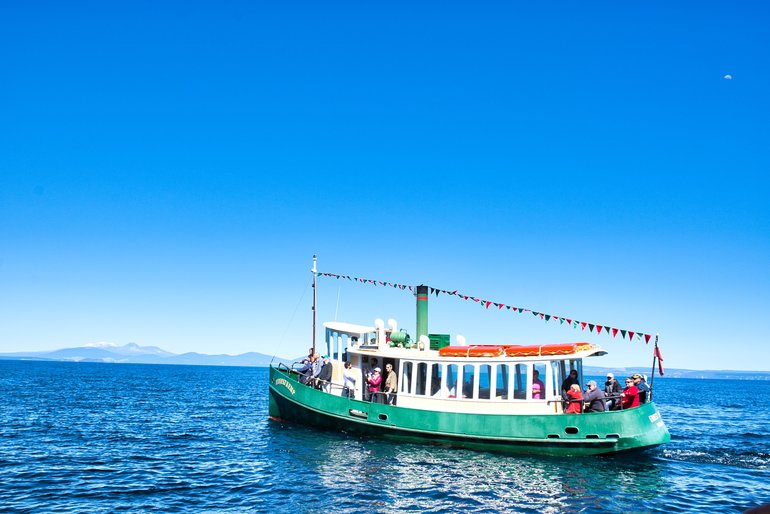 The Ernest Kemp on Lake Taupo

You can do a two-hour cruise, in either the mid-morning or afternoon. This informative cruise takes you to the Maori Rock Carving that towers over you at 14m above the water. Taking four years to sculpt, it was finished in 1980 and now is one of the top attractions in Taupo. There is plenty of time spent here getting photos from every angle. You can also do this tour to the Maori Rock Carving at 5 pm as a Cocktail Cruise with wine, beer and pizza. 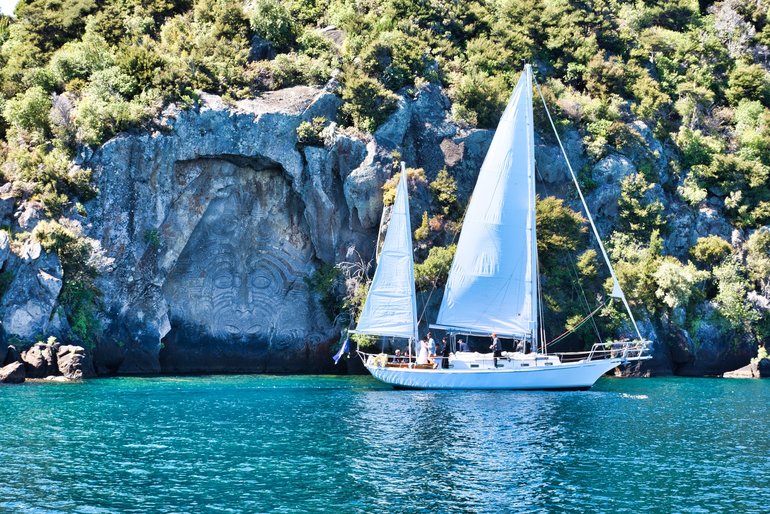 Sail Barbary and the Maori Carving in the cliff

Another way to cruise to the Maori Rock Carving is under sail with Sail Barbary. On this 2.5-hour cruise, you have the option of relaxing on the deck, or helping hoist the sails and getting into the spirit of the old sailing days. Always remember the sunscreen. A complimentary tea, coffee or milo awaits you on the morning and afternoon cruises, as you glide through the waters to the Maori Rock Carving. My trip on the yacht was under clear skies, gliding across the lake powered by an electric motor and then by a gentle breeze under sail. The sailing times are the same as the Ernest Kemp with an extra at 7.30pm which is the same as the 5.00pm with pizza, wine, beer or a soft drink. 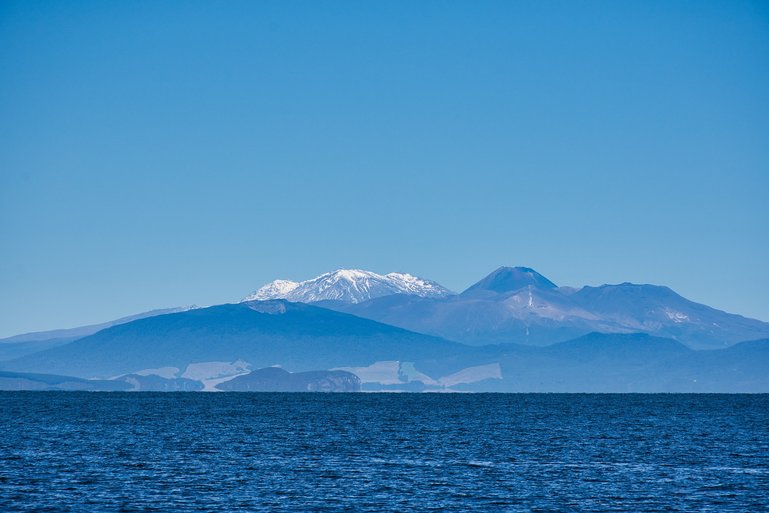 Mountains Ruapehu, Ngauruhoe and Tongariro from the Lake Taupo

It’s best to get in early for all of these cruises as they do sell out fast any time of the year and there are limited numbers.

The Lake is not the only place you can cruise. The Waikato River is host to two boat rides up to Huka Falls, Huka Falls River Cruises and Huka Falls Jet.

For the adrenaline junkies, the Huka Falls Jet will not disappoint. Trips 30-minutes long, are done every day, with fast jet boating taking you up to the bottom of Huka Falls. With speed and agility, you’ll be doing 360° turns, swerving up and down the river getting closer to nature than you ever thought at speed and having a ball. First, you go down the river to Aratiatia Dam for a bit of action before heading up to the falls. 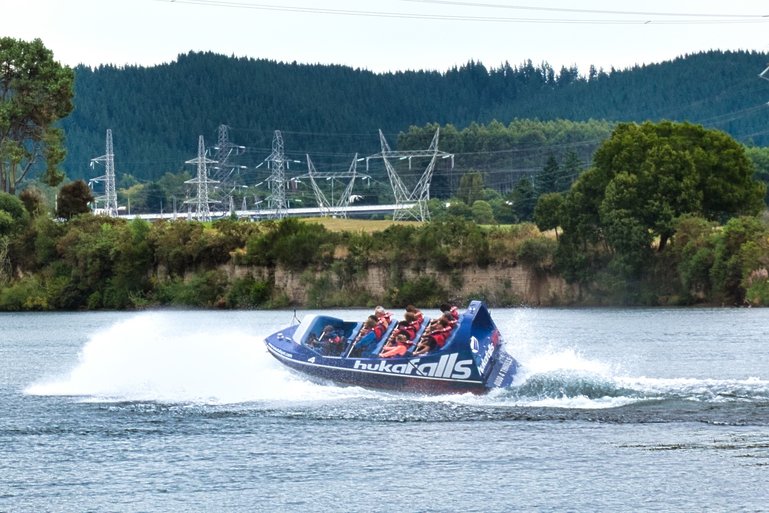 Getting as close as possible, you can feel the spray off the falls, as you go in at least a couple of times, before heading back doing more 360° turns. For the real adrenaline junkie, you can also do combos, combining the jet with skydiving, bungee jumping or white-water rafting. 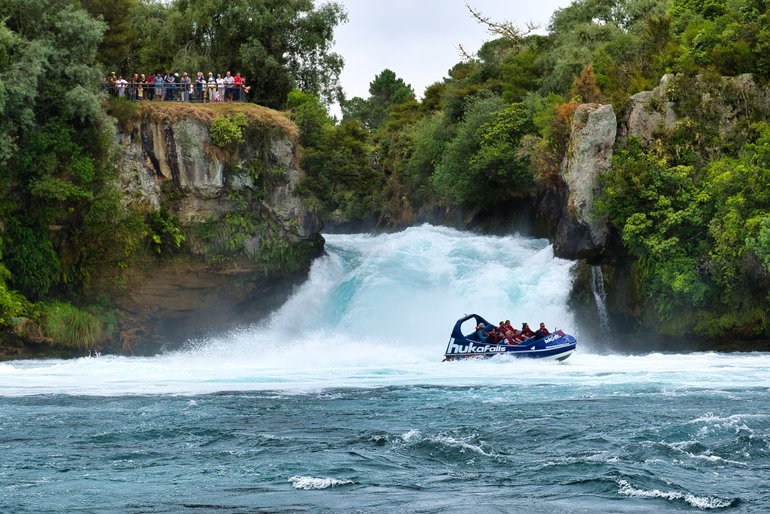 The other cruise is Huka Falls Cruises. There are four cruises a day 10.30am, 12.30am, 2.30pm and 4.30pm each being one-hour and 20-minutes of a relaxing cruise up the river to Huka Falls. As it departs from the Aratiatia Dam, you can see the gates being opened half-an-hour before the cruise departs. The road bridge, on one side, shows the gates clearly opened, with water rushing through. 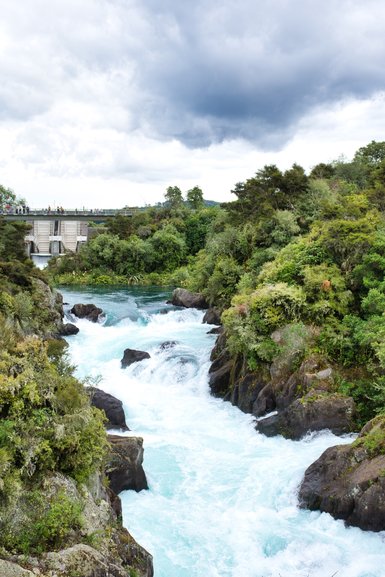 The Aratiatia Rapids rushing down from the open gates 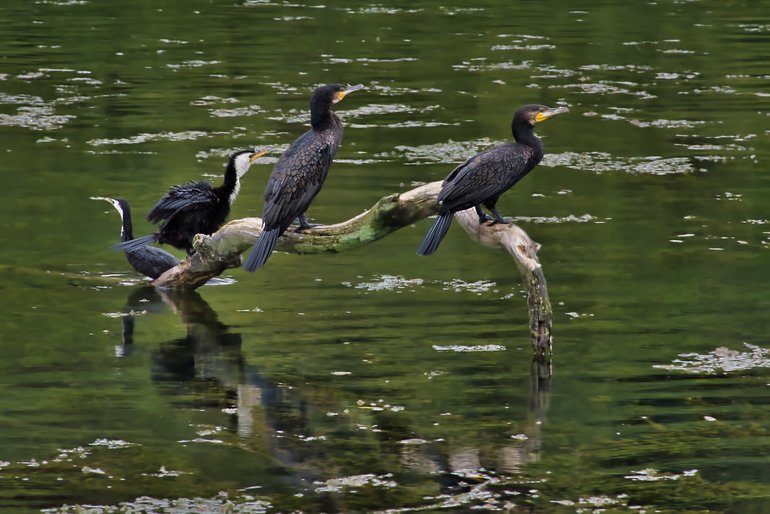 Some of the waterbirds you'll find along the Waikato

Complimentary tea and coffee are onboard as we set off. From the boat, you can see nature at her best as well as the power of the earth in this area which powers the Wairakei Geothermal Power Station. A hot water stream mixes with the Waikato near the Huka Falls Jet ramp. You can see the steam rising from the water as it joins the cold water. Trees and rocks lie on the bottom of the river for who knows how long, clearly seen as the water is crystal clear in parts. It doesn’t seem to take long to get to the falls as our Captain gives a great commentary on everything in the area including the flora lining the banks. 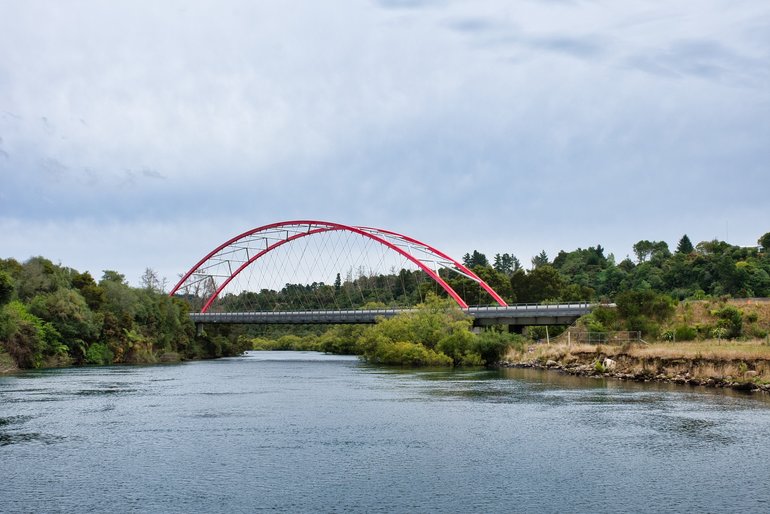 Crossing the Waikato, the Red Bridge is a bypass road of Taupo

At the falls we are taken four times up as close as we can get with Mother Nature’s power being more than any engine. The spray from the falls hitting those up front especially. It’s then back to the Aratiatia Dam in time for the next opening of the gates and more of Mother Nature’s show. 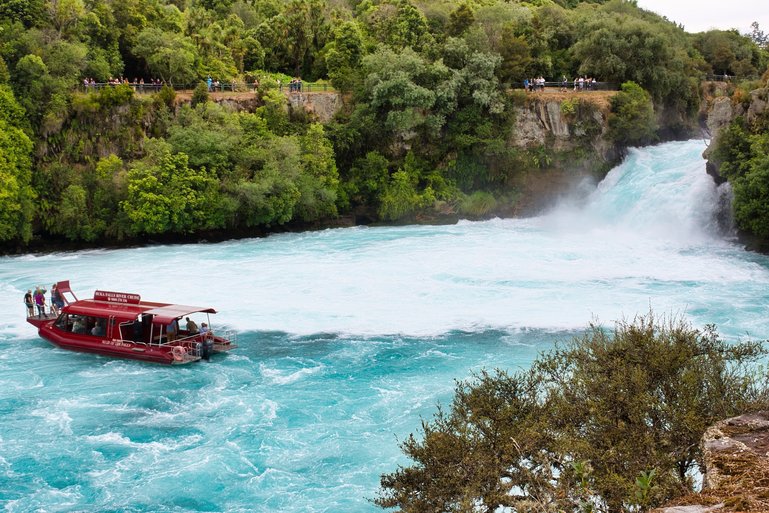 This one I haven’t done, but the Aratiatia Rapids also have their own Jet Boat ride. Having been featured in movies such as The Hobbit, the rapids are famous in their right as a spectacular breathtaking view, as the waters rush down at a staggering 80,000 litres per second after the opening of the gates. You can either drive to the dam or walk from Huka Falls or further back at Spa park.

Rapids Jet also does a combo package with Whitewater rafting and Skydiving part of it. This 35-minute experience is unique to Taupo with an exhilarating ride, it is a once in a lifetime experience and totally different from the Huka Falls Jet Boat ride. Although you still have the fast speed and the 360° turns, this trip offers the added thrill of powering over the rapids and is a longer experience.

Whichever boat option you take, Taupo has so much to offer whether you’re an adrenalin junkie or like something a bit more sedate. 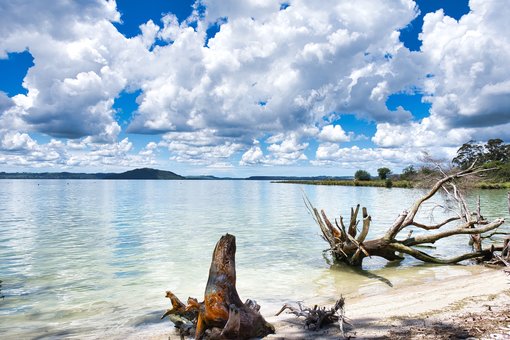 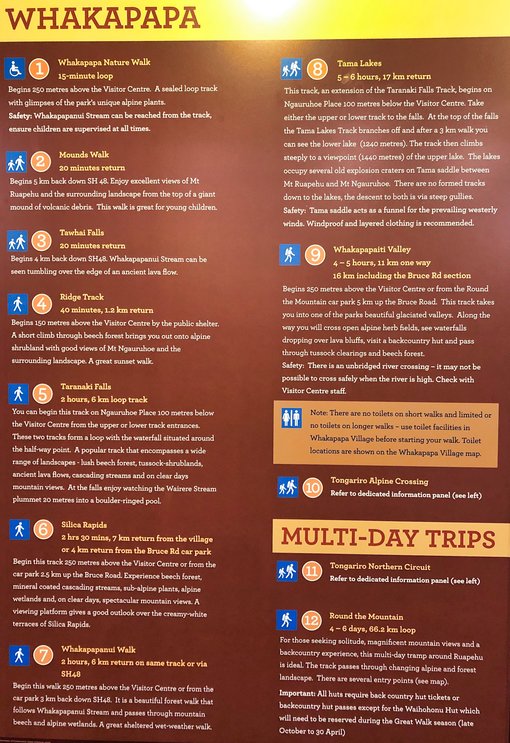