Picnics with My Dog

Here in Englandville under the benevolent bullying of BoJo, we have been enjoying lockdown Mark 2 for the last month - not quite as ferocious as lockdown Mark 1 but confining nevertheless.

Scotlandshire under the dictatorship of Wee Jimmy Cranky has locked the doors this week (only in certain parts, my brother can go to the pub, but I can't, which is a shame because he hates going to the pub, whereas I rather like it), as well as turning the lights off and pretending no one's home - like one used to do when the coalman came around for his account settling....

Years ago I was at a friend's house with Beautiful Daughter, pregnant with SPB (hence I looked like a Weeble). We were enjoying a cuppa and a natter whilst our small humans destroyed the sitting room, when my friend let out a screech, hastily shut the curtains, and made us hide behind the sofa. Much to my confusion. Turns out the coalman was at the other end of the street and she didn't have any money....he must have been able to see my enormous arse poking out from behind the sofa, through the chink in the curtains - God only knows what he thought we were doing!

Back to the story;

Bec and I are locked down in varying degrees of severity at opposite ends of the country. This isn't boding well for our second weekend of December hike and further to my quest for a similar fitness level as Bec I decided that a hike with just the dog was the way to go.

Dude is an awesome boy and I love him every much, but his conversational abilities are akin to a brick, so obviously, there wouldn't be the same charming and intelligent chatter that enlivens the gruelling yomps that Bec organises.

I've never been called charming and intelligent before. I'll give you the fiver later Pip.

Where to go was the next dilemma, there are a paucity of gentle slopes around here let alone actual hilly hills.

So Dude and I hit Google with optimism and eventually found a local walk that took in 'Swannington Incline' which we thought sounded quite hopefully hilly.

Everyone from ‘up north' in the UK, including Scotlandshire knows that Southerners don't do hills properly. Words like ‘incline' and ‘downs' are used to describe slight bumps on the landscape. Whereas in the tough northern regions we have ‘pikes' 'fells' and ‘lawers'.

The Swannington incline/pimple, according to Google, was a hill so steep that steam trains had to be winched up it. It was at this point that Dude reminded me that he takes 'medicines' for his back legs - I channeled my inner Bec and told him to stop being a puff.

I should explain here for our newer readers that my dog doesn't really actually talk but I live alone, we are in lockdown and I may have gone slightly mad.

I have lived alone for nearly 4 years now - which I'm usually very happy about - especially when I hear my friends tribulations with their relationships and families. But I do have to admit that this lockdown business does bring aloneness into stark reality.

It could be worse, you could be a mad cat lady.

After negotiating with Dude that if the hill was too steep for his poor legs I would carry him (never going to happen, he is the same size as I am, but thinks he is a chihuahua) I made some sarnies and off we trotted.

We started along the old railway track that runs through the park at the back of my house, Dude knows it there so there wasn't too much stopping to sniff, past the old station (now the Whitwick Historical Society ) and up past a lovely old church.

Now Dude as anyone who has met him knows, is a dog of not only limited conversational ability but also limited intelligence, he is on top of this, rather protective of me and does tend to view other dogs, regardless of their size, as a real and present danger, which can make a stroll a bit challenging as he tries to eat them.

As we are strolling along (the flat bit) we encounter many couples and families, all behaving like their life is a fucking cornflake advert, you know, cute well behaved dog, cute pleasant children, couple hand in hand, looking radiant dressed in Berghaus, laughing whilst as a juxtaposition to this blissful togetherness Dude is weaving all over the place borking at their puppy in case the very threatening Cockapoo decides to come anywhere near me and I look like I have been dragged through a hedge backwards and can't remember if I've washed my face or not.. sigh.

I once knew a family just like that. They were forever cuddling and kissing whilst watching their talented offspring play posh musical instruments, play sports of all kind for every first team going, got academic achievements galore and were generally pleasant to everyone. The wife even got up at 5:30am to bake fresh bread every morning. Not only did I feel inadequate, but I also felt my marriage was inadequate.

As it happens, he was actually shagging a colleague at work and it was all a sham. No Schadenfreude at all there whatsoever!!!!!!!!!!!!!

As we continue onwards, now puffing up a hill, I start to chat to Dude about the merits of being single over being in a relationship.

We are walking along a street of very very married houses, the sort of street that has a clear delineation of pink and blue jobs, men washing cars, women cleaning windows, you all know the craic, and I wonder why I find the whole thing so bloody nauseating. Dude suggests this is because I'm awful at relationships and my dark soul is best left on its own, which is true, but odd when your dog says it.

I have a very nice window cleaner and lovely Romanian people wash our cars.

We crest the hill and feeling like intrepid explorers continue down hill looking for a big sign saying 'SWANNINGTON INCLINE' which I assume will be visible from space as this is an important historic 'thing'.

We overtake a couple of women who are casing the hedges for holly - Christmas is coming - I have no doubt they will send their husband's down under cover of darkness - this being a blue job- to cut great swathes of the awkward prickly stuff with which to festoon the insides of their very married houses.

One of the ladies sees Dude and squawks,

'Oh what a lovely Doggie!'

Dude and I both scowl at her - this is why I only have a handful of friends - I'm neither friendly nor tolerant!

It's true, she's not. We built our friendship up over time in case she bit me.

After some further walking, toing and froing, and unhelpful map consultations I decide that we are in exactly the right place, only we need to turn right not left. We do so and find with less of a TAHDAH that seems warranted some extremely muddy steps down into what was once the railway track.. 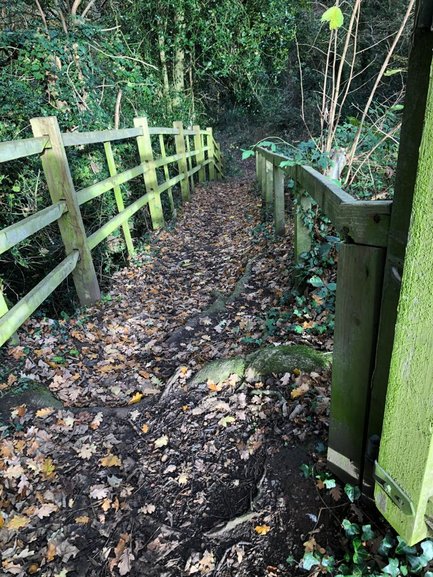 Very Steep Muddy Steps should come with a warning I feel

At the bottom of the steps we look up and down this seemingly endless 'incline' (see what I did there? )

It's a tiny, tiny slope.

Its steeper than it looks

Down the incline (does that make it a downcline?) 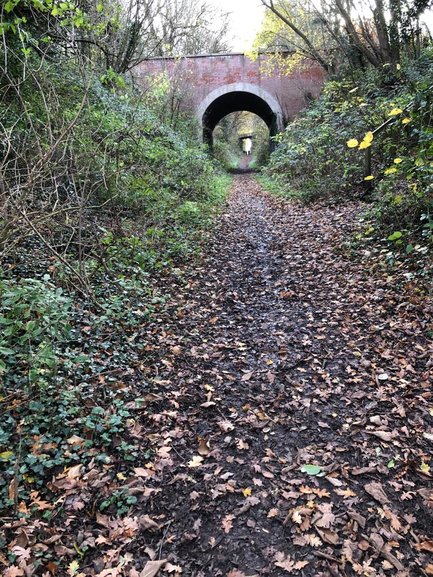 Up THe Incline (which sounds like a Carry On Film.) In the distance - the only evidence of humanity we encountered.....

Dude and I look at each other apprehensively - its practically silent , no people around at all, no traffic noise, the light is filtering through the trees dappling the leaf strewn mud we are walking on, casting really strange shadows like we have stepped into some sort of weird bubble.

Nothing loath ( Bec - it means not unwillingly but usually in respect of something that other people would be loath to do - i.e. unwilling). (Pip - then it should have a fucking ‘e' on the end of it! That would then spell Loathe Bec....) off we set, after about 5 paces the atmosphere is getting to both of us, normally Dude would be snuffling about, sniffing out squirrels (his arch enemies) here he is walking right next to me not pulling, head down, ears down.

In the forced cheerful tone one applies to conversations with small children during thunderstorms I suggest to Dude that we stop for a sarnie, that perks him up no end!

I find a big old fallen tree to perch on and Dude chooses optimum begging position next to me, we share a ham sarnie (Dude's favourite) and consider how far we have left to go.

As we emerge from the underneath of the small bridge, the strange atmosphere seems to lift and Dude has pricked his ears up and is trotting along quite happily, we spot a squirrel in the distance and enjoy a bit of a bork at it - well Dude does, I'm odd but not that odd!

This incline is quite steep (really?) and I am puffing a bit - I decide on the spur of the moment that my short term goal is to be able to run up this without stopping or passing out - and just to show myself that I can I finish the incline at a run.

We burst out of the old track and into the sunlight at the top. Dude is panting with his tongue lolling out the side of his mouth - looking Majestic. I, on the other hand am wheezing like an old gimmer yow, (say it out loud...) oozing a lack of majesty from every pore. 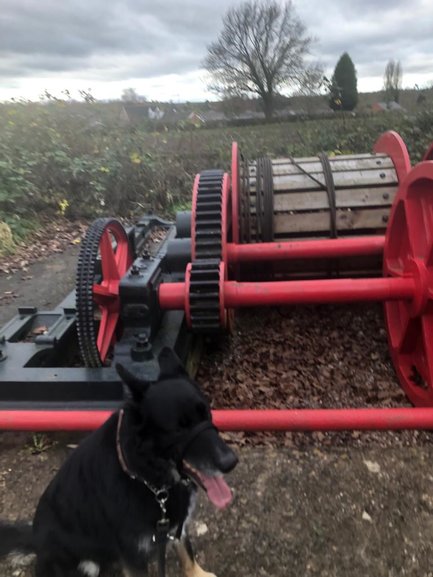 We point our noses homeward and head off - not noticeably down hill - which is confusing.

It's because it's a Southerners wussy hill.

Still musing about relationships and why I seem preternaturally disposed to dislike them intensely - answers on a post card please....

You've just dated and married knobs. You're great at relationships with people who are not knobs.

We arrive home, and its warm and its ours, Dude doesn't care how many colours of strange I am, and I love him....

Except when he does this 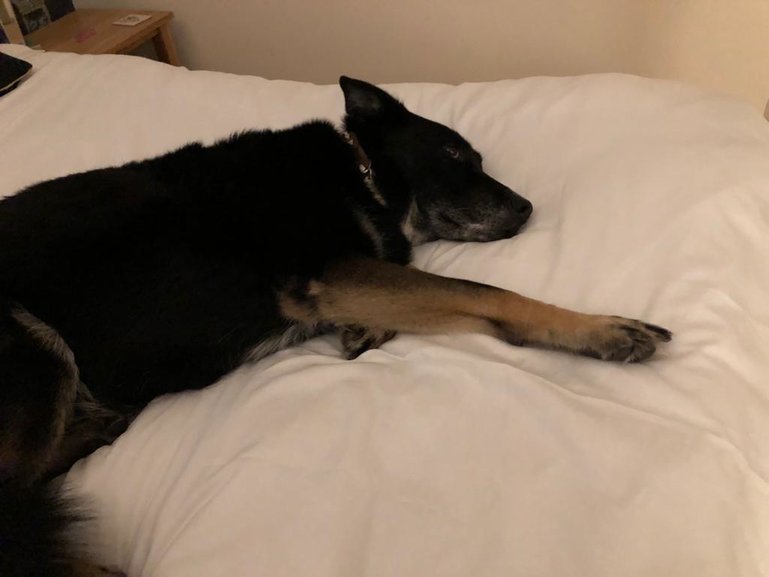 Dude on the clean white duvet

Yes this is a brand new white duvet cover....git.

Loved it. I am sure Bo Jo would love it too if he combs his hair that is ! Absolutely wonderful reading and I loved the accent 😂. 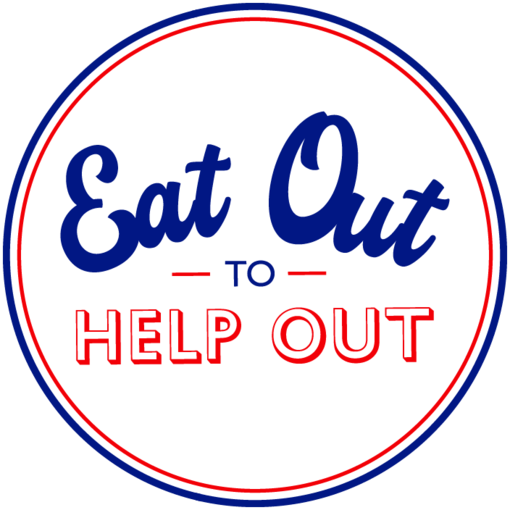 Eat Out to Help Out

Where to Get the Cheapest UK Covid Tests for Travel