Just an hour out of Cardiff is the Brecon Beacons, a beautiful place to connect with nature and explore Waterfall Country.

This area has numerous walks across the hills and to the top of South Wales' highest mountain, Pen y Fan.

The Brecon Beacons is also known as Waterfall Country, with numerous waterfalls and trails.

The following waterfalls I visited but there are more and a visitor centre should be your first stop to not only get directions and what to do but also weather conditions.

Right in the heart of Waterfall Country this trail would be the most popular and well known falls in the Brecon Beacons.

There are three car parks to get to these waterfalls. Clun-gwyn is the smallest on the side of the road with about eight parks. From here it takes you to the other side of two of the waterfalls, Sgwd Clun-gwyn and Sgwd Isaf Clun-gwyn. I didn't park here so I don't know anything about the track.

This track also takes you to the Cwm Porth car park where you can pick up the trail to the other waterfalls and the other side of the two you may have visited. There is also the Porth yr Ogof cave at this car park.

This car park has a shop for maps, food and drink as well as an information officer for advice and directions. There are toilets and this is a pay and display car park with picnic facilities.

Once again I didn't use this car park but went around to the other car park Gwaun Hepste. It is also a pay and display and has a picnic area.

The start is down a road which then turns into a track closer to the waterfalls. This track has markers with reference points if the Rescue or Ambulance is needed. The trail from here is 5.5 miles or 9kms return and is listed as strenuous.

The track itself isn't bad starting off as it's a road until you turn off down a narrower road. It's about 20 minutes from the turnoff to the first waterfall and it's all downhill. Remember on the way back it's all uphill and steep in parts.

When you get to marker 11 you can either go left to Sgwd yr Eira and go around clockwise or straight ahead to Sgwd Clun-gwyn and go around anti-clockwise.

I went to Sgwd Clun-gwyn first and when you go off the track you have a very rocky track down to the waterfall. 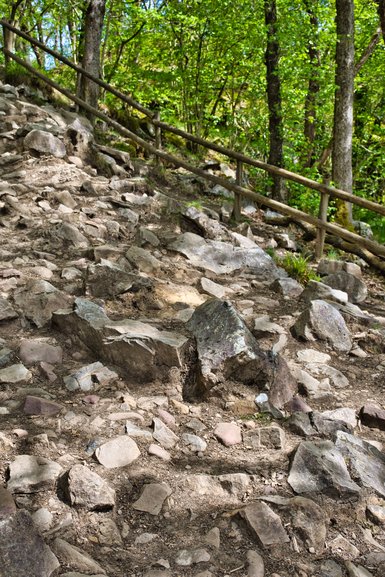 The smooth path gives way to a rocky scramble down

Once you are down you have a great view of this waterfall. Unfortunately, it's not a clear view as a broken branch is in the way. 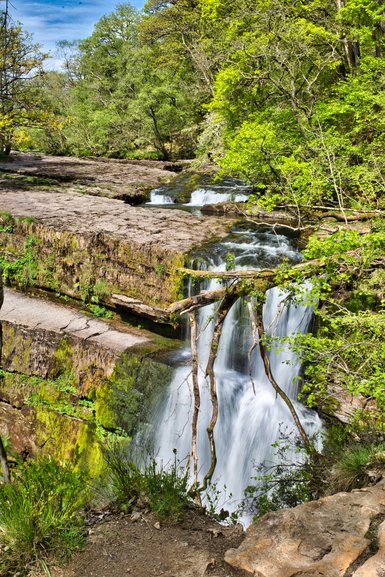 Sgwd Clun-gwyn with a branch obscuring the clear view

It takes about 30 minutes to walk down to the next two waterfalls. The track starts to get a bit rougher with roots and rocks although it is pretty level. 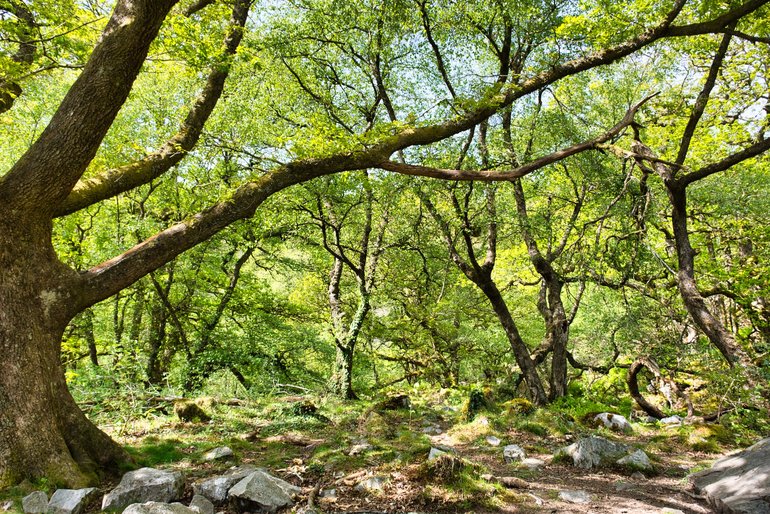 The rocky but flat walk along the main trail

When you get to the turnoff you will find the track down a bit challenging. It is steep with rocks, steps and is slippery in parts. It's about one kilometre each way down to the waterfalls. 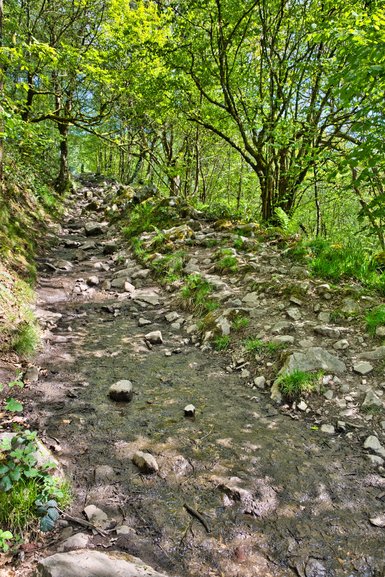 The rocky, steep and slippery track down to the 2nd and 3rd waterfalls

The path ends right at the next waterfall, Sgwd y Pannw, which I think is the best. You have a great view of the cascading waters as they are so close and you. 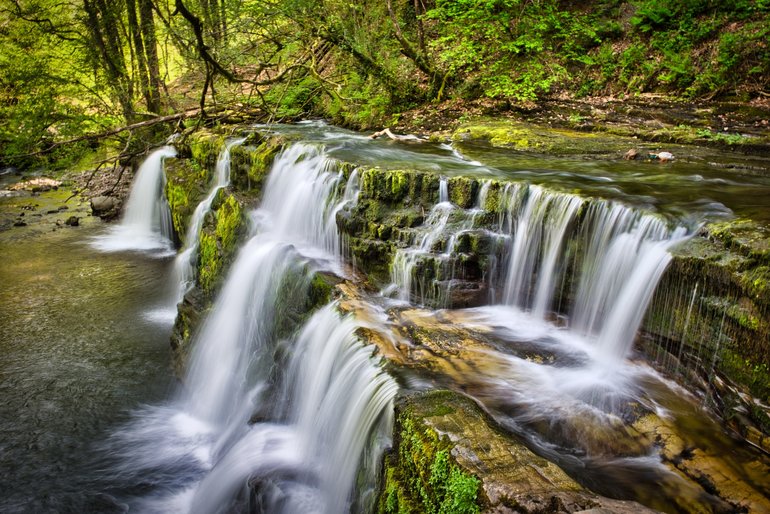 From here you walk back up the river towards the next waterfall, Sgwd Clun-gwyn. Although this is flat, there are boardwalks and it gets rocky near the end. I don't think I got to the end but the trail did seem to end unless you had to clamber over rocks. 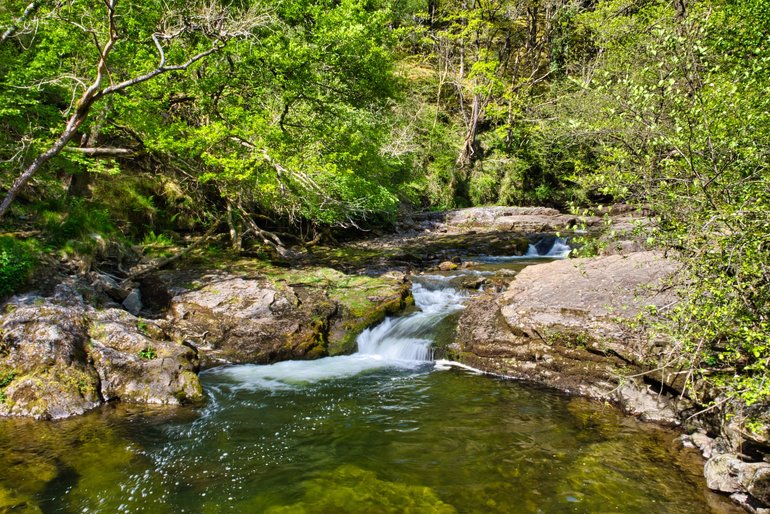 As far as I got to Sgwd Isaf Clun-gwyn

Working back up to the main track is quicker and easier than coming down. From here it's only about 20 minutes to the next turnoff to the last falls. 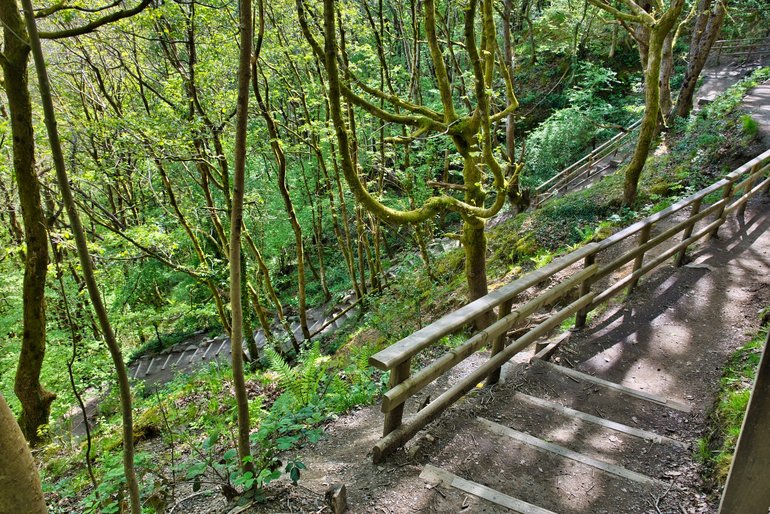 The steps get wet and slippery near the bottom and then it's rocky next to the river. You can walk behind this waterfall although it is wet, slippery and narrow. 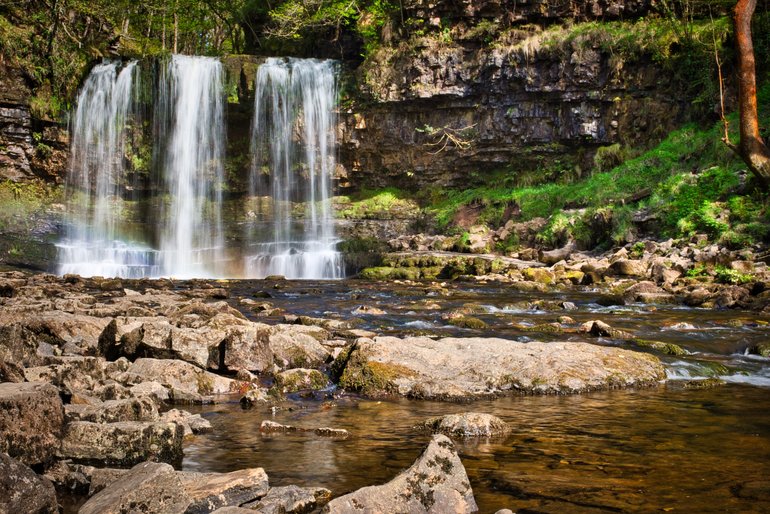 Once you're back at the top it's an easy loop back to marker 11 along a gravel road.

This walk took me under 4 hours and others I had talked to along the way were taking around the 4 hours or more.

It's a great walk although you need moderate fitness and the track is too rough to take a pram or wheelchair on it.

This walk also has four waterfalls and two car parks.

The first car park starts in the village of Pontneddfechan. Whichever car park you start from, the trail is 3 miles or 4.8kms long.

This track is listed as moderate but it is still steep at parts rocky and wet and muddy in parts.

I started this walk from the Pont Melin-fach car park. It's only about a couple of miles from the main road but the road is very narrow. There wasn't really much if any room to pull over if someone was coming the other way.

The 19th Century bridge at the Pont Melin-fach car park where there is also a picnic area. 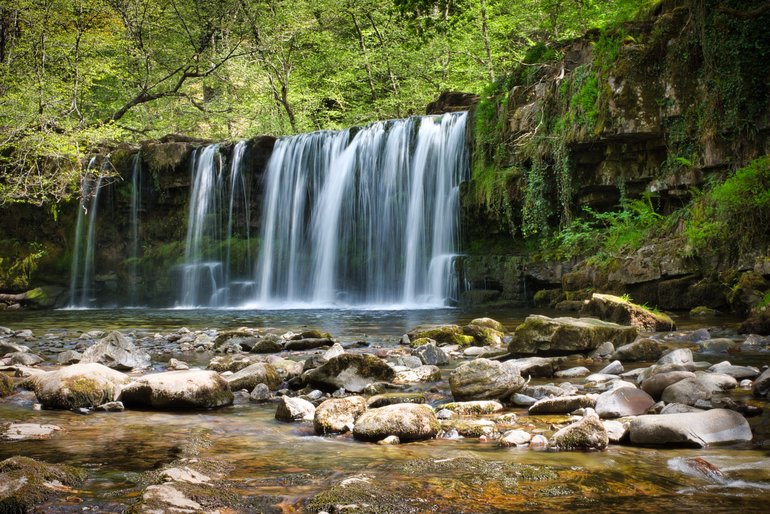 The great fall that is Sgwd Ddwli Uchaf

You can see it from above or take a path down further along the track. You have a great view looking back up from below.

Back on the main track it doesn't take long to get to the next waterfall. 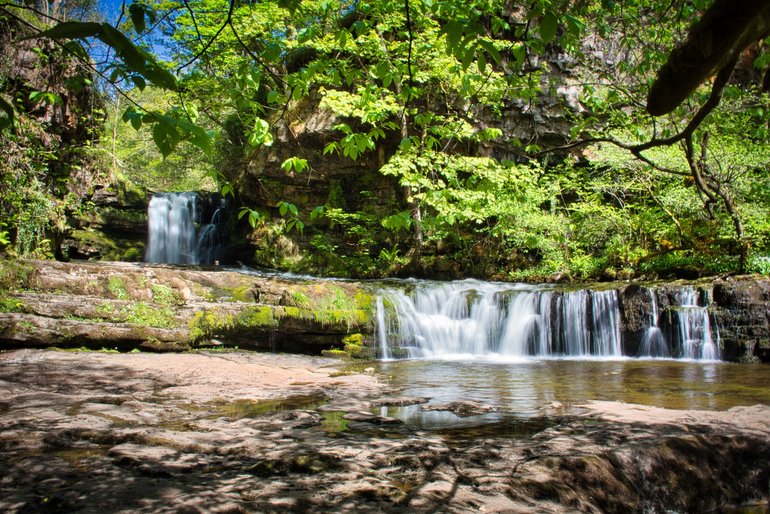 A view back of the Sgwd Ddwli Isaf

When you get just before the bridge, you can go down on the flat bedrock to get an up close view of the falls. 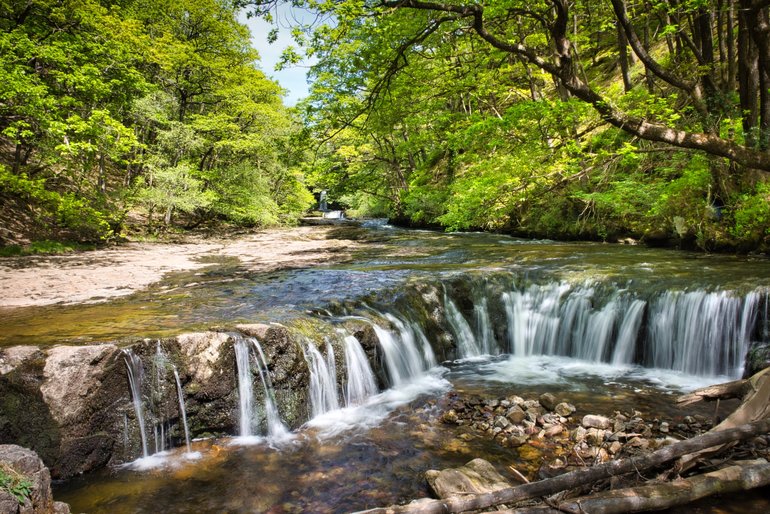 The view back from Sgwd y Bedol to Sgwd Ddwli Isaf

Once down, you can walk back to the upper falls for a better view. There are also rock pools here full of tadpoles.

Back up on the track, you have the bridge to cross before the track becomes wet, slippery and muddy. Occasional boardwalks help you cross. 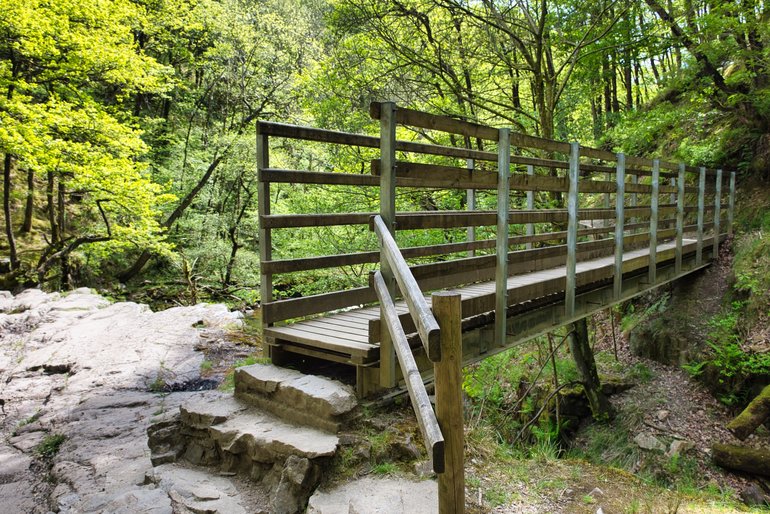 One of the bridges on the track

The last waterfall, Sgwd Gwladus is at the turnoff. You can go across the bridge and down to a lookout although once again the view is obstructed by a tree.

You can turn off before the bridge and take the track down to a much better view at the base of the falls. 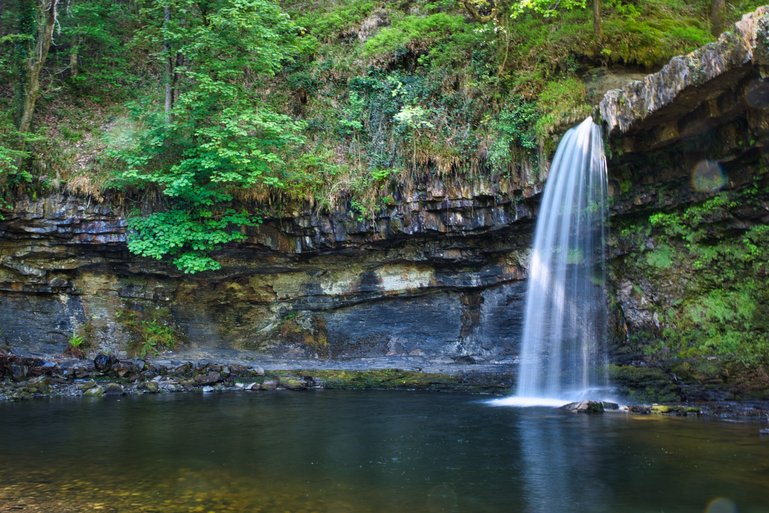 Sgwd Gwladus from below

I didn't carry on into the village but turned back to the car park.

This stand-alone waterfall is a bit out of the way south of Brecon but is an easy enough walk to the waterfall about 20 minutes from the car park.

I was told to walk back across the road bridge to a gate and take the track from here. There is a track from the car park but the waterfall is best viewed from the other side of the Caerfaneel River.

It is a good track but in parts, you have wet and muddy crossings as small creeks cross your path. It can also be a bit steep and rocky. 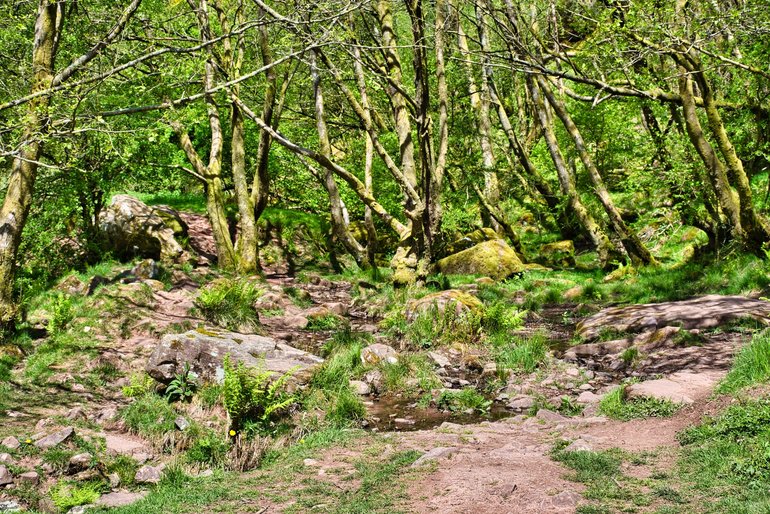 It doesn't take long to get to the waterfall. 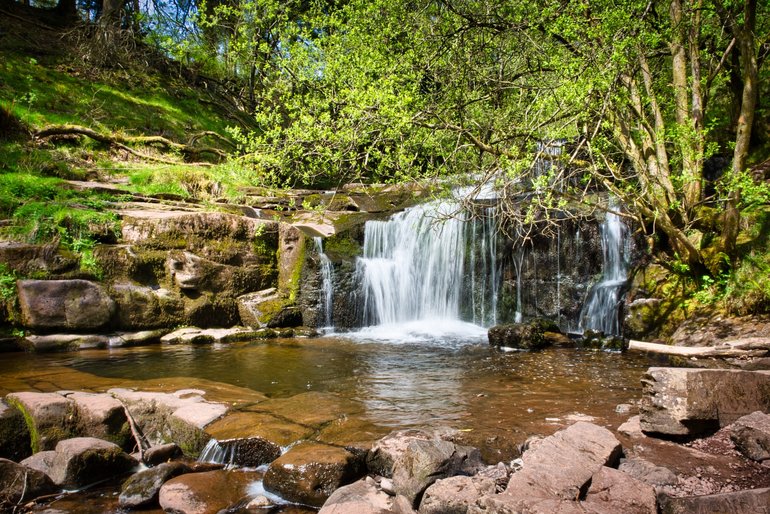 You can go further up the river but the next lot of falls are obscured by bush. I turned back to the car park just a bit further up the track.
It's a nice little walk to a pretty waterfall that doesn't seem to many people on it.

Another single waterfall, Henrhyd is the highest in South Wales at 90 feet. Although out of the Brecon Beacons, it's still part of the Waterfall Country. You can do a longer track seeing cascades along the river which is about an hour each way but the track is steep, uneven, wet and slippery in parts.

It only takes about 20 minutes to get to the falls. You go down most of the way on a gravel track before heading up the stairs and then along to the falls. You then have rocks again to negotiate down to the water. 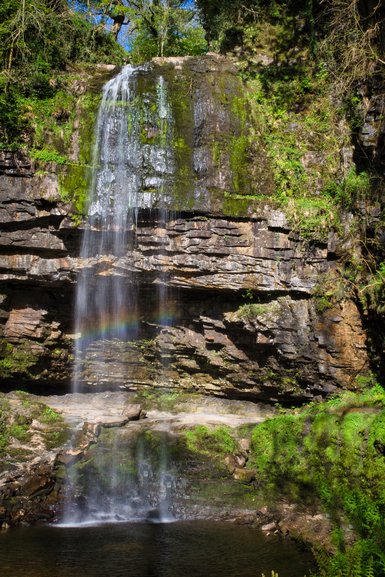 The impressive Henrhyd Falls even with little water

These falls also allow you to go to the back of the falls as there is a large ledge behind the falling water.

Remember what goes down must come up and you have a fair walk back up to the car park. 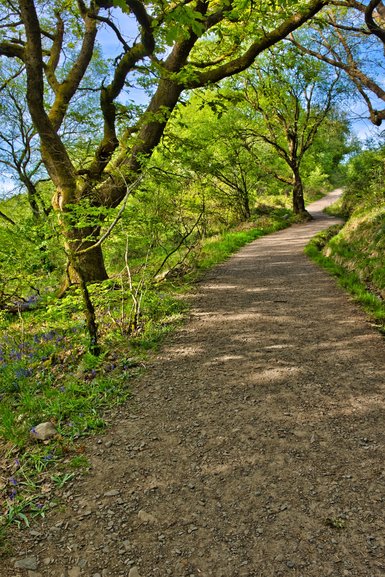 Another attraction in the district, is the Brecon Railway from Merthyr Tydfil. 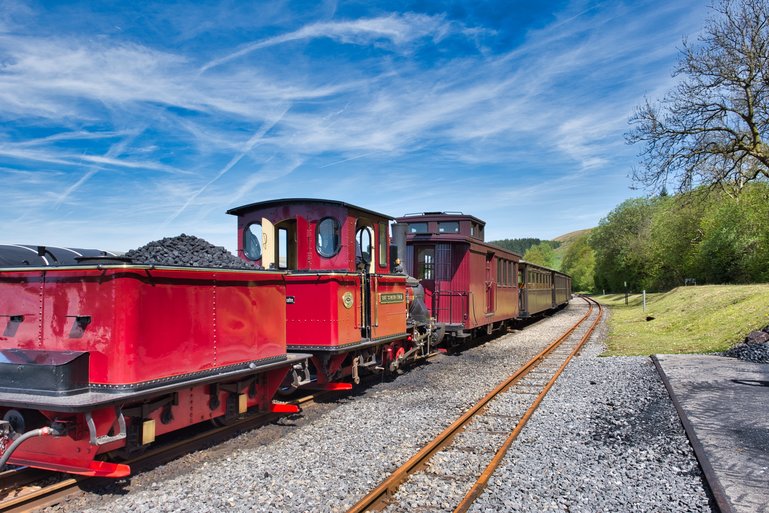 The Vintage Steam Locomotive runs along the narrow gauge line from Pant station to the next station of Pontsticill which has views across the Pontsticill Reservoir. 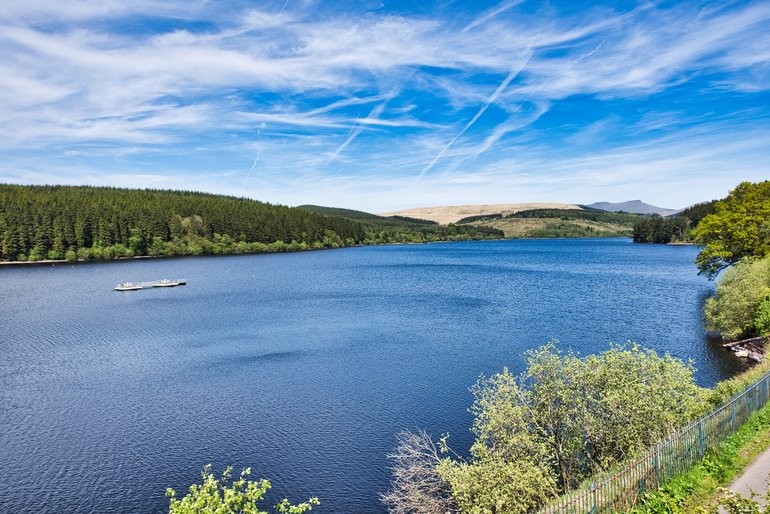 The blue waters of Pontsticill Reservoir

When I did this trip you stop at Pontsticill station for about 35 minutes, enough time to take in the sights and have a coffee break. You can also take in the walks in the area and catch a later train back.

I did all the Waterfall Country in the Brecon Beacons over two days comfortably. I don't know what it's like in the height of summer, but I did this area in the middle of May and you weren't bothered by crowds. 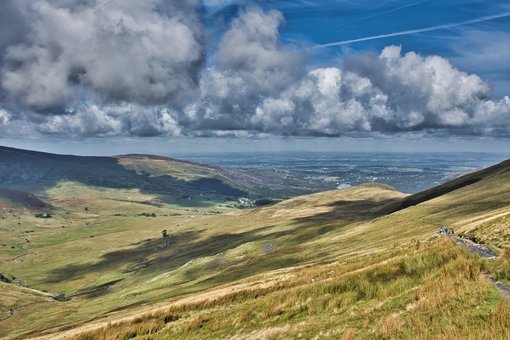 Winging It in South Wales: An Amateur's Guide to the Brecon Beacons