Scultpture & Statues in Havana: 5 Important Tombs at the Colon Cemetery

The Colon Cemetery is the biggest cemetery in the Americas and offers travelers and art lovers in Havana numerous possibilities to appreciate art, especially sculpture and statuary. More than a mere cemetery, Colon is a huge outdoor museum with more than 56.000 tombs.
However, what is most impressive at Colon Cemetery is the artistic value of hundreds of pantheons, a sample of Cuban architectural history, and the feeling devotion that inspired the creations regardless the origin and social condition of the buried citizens. Behind each one of the representations that safeguard the last rest, famous architects and sculptors from Cuba and all over the world have intervened with their art with their different motivations and styles.
We recommend a list of tombs to visit and photograph in the Colon Cemetery for their majesty, luxury, originality, artistical quality, magnificent details and the stories that have been born out of each one of these tombs. Throughout the eclecticism, the deco art, the art nouveau, and the modern arts, the delights and the authors have expressed interesting ways of interpreting life and death at this place declared as a Cuban national patrimony.

1. Monument of the Victims of Charity

In our opinion, this is the most imponent and significative mausoleum of all at Colon Cemetery for its beauty, epic expression, and social impact. It's a 10 meters height sculptural set erected in tribute to the firemen who died while doing their heroic work. The winged and bandaged angel of Faith carries a faint fireman on arms while four feminine figures surround the grave representing the Abnegation, the Pain, the Heroism, and the Martyrdom. It's a creation of the Spanish architect Julio Martinez Zapata and the sculptor Agustín Querol Subirats.

No doubt that the tomb known as La Milagrosa is the most visited in the Colon Cemetery for believers and needy that ask for Amelia a solution to their hardships of motherhood and health. Amelia Goyri's tomb has become a place of peregrination since the popular story of a miracle about her body and her baby's being mummified after 13 years.

3. The man buried on foot

This is the only vertical tomb at the Colon Cemetery, with a person buried on foot. Beyond an apparent simplicity, this tomb stands out of the social, cultural and religious transgression of a man who considered himself fortunate in life despite a tortuous path. Eugenio Casimiro Rodríguez was sentenced to life imprisonment in 1918 for a violent act and for hazards of fate, from jail he met the daughter of the incumbent president, they pardoned him, he married her, he made a political career and, rich and powerful, reached the Chamber of Representatives. Before dying, he ordered to build a vertical niche for himself in the family chapel.

4. The Pantheon of the Prelates

In a very central space appears the Pantheon of the Prelates, whose first tenant was the famous and tireless Bishop of Sword. A classic pillar crowned with an angel on the side and has at its base the attributes of the Catholic bishopric. Thus arise the ceremonial miter, the cross, and the pastoral staff. They are protected by a balustraded perimeter. The burning lamps on the fence celebrate and illuminate; inverted torches print rest and peace.

Jeannette Ford Ryder (1866-1931) was an American who arrived in Cuba to found the charitable group Bando de Piedad, in defense of the poor, the destitute, the orphans, the homeless and domestic animals. She died at 65 years of age and her faithful puppy Rinti missed her, too. The puppy threw itself at the feet of the stone sarcophagus, located on 14th Street, between H and Fray Jacinto, until it died of sadness and starvation. And the Cuban sculptor Fernando Boada immortalized the puppy. 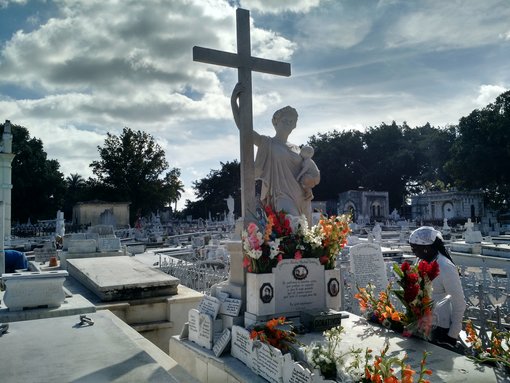