Rotterdam: A Guide to An Unforgettable City

I fell in love with Rotterdam the very first time I went there when I was a teenager. It is unlike any other city I have ever been to anywhere. Unfortunately for them, it was heavily bombed during World War II so they had to basically rebuild the majority of the city save a handful of buildings. Because of this, they started from scratch and created something really special and different than the majority of Europe that basically just recreated what was already in place prior to the war.Come join me as I show you why Rotterdam is an unforgettable city. 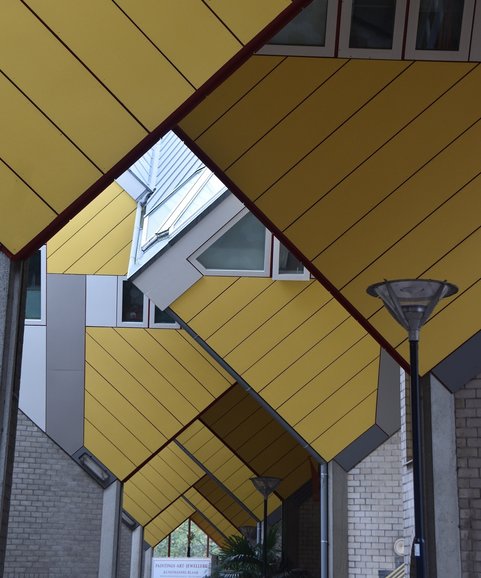 Getting off at the Rotterdam Blaak station, I was transported back in time as I stepped out of the station and looked up to see the Cube Houses. Since the day I met my husband, he has heard me talk about these and now he finally gets to see them in person. While there was so much I wanted to see in Rotterdam, it was going to have to wait because the first thing in order was to go back and visit my old friends and they did not disappoint. As a matter of fact, they were more amazing than I remembered from so long ago.

It was a mere 3 euros to go into the Show Room (open daily from 11a-5p). Should you decide to enter, keep in mind the stairs are narrow and steep. The limited amount of space inside, approximately 270 square feet, is spread across 4 floors.

VTML Warning: If you have bad knees or claustrophobia, this is not the place for you!

The ground floor has a staircase that grants you access to the 1st floor, which is a tiny, triangle-shaped room. This is where the living room, with a pole in the middle, and the kitchen are in the unit.

From here take another flight of steps up to two bedrooms and a small bathroom (on the 3rd floor). On the top floor is a small open space. In the Show Room, they show it as a little garden type space. 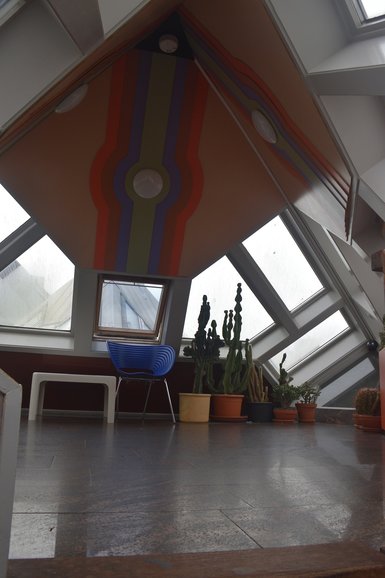 Should you decide to go here and wander around, please keep in mind that people live in these amazing modern structures and that they are more than just a tourist attraction.

VTML Tip: There are several train stations in Rotterdam but if you want the Cube Houses to be your first stop, you will want to make sure your train stops at the Rotterdam Blaak station since this drops you off basically steps away from them.

Since you are here, you might as well pop over to Markthal. If it is too early to eat, come back later. If nothing else, check out the ceiling and see all the local food that is offered here. As we wandered around, we found everything imaginable to eat but my personal favorite was Jamie Oliver’s Italian. Even if you are gluten free, you can find things to eat here.

When you are done here, step outside and take notice of Grote of Sint-Laurenskerk. It is one of the few buildings that survived the Rotterdam Blitz during WWII.

But back to wandering around the streets of Rotterdam… This time around, I wanted to focus on street art, I know big surprise. And this is not a difficult task as it is all over the place but if you want to get the biggest bang for the buck and see a lot in a short period of time, download the free app from Rewriters Rotterdam.

We spent most of our time in the Centrum part of town.

On our way from the Cube houses, we came across many interesting pieces. The first large mural we saw was this one by CES53, at 2e Blekerhof, an artist from Rotterdam but is known world-wide for his work. 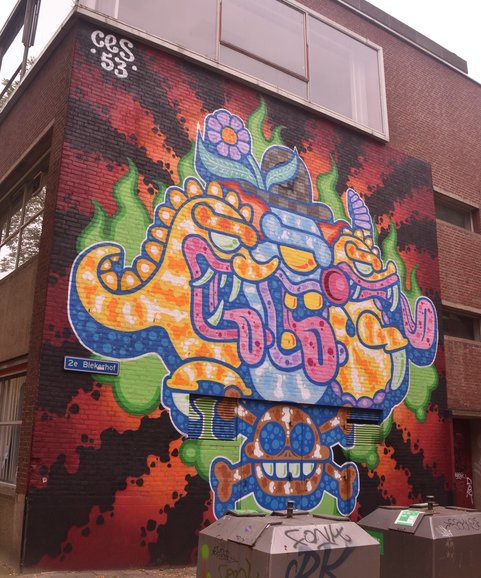 CES53 started out as a graffiti writer and was part of the Dutch collective Lastplak.

Just up the street, we came across this mural by Bier en Brood (beer and bread) with their black and white mural on the side of a ballet school. This 2-man Rotterdam based crew have been working together for the last 10 years. 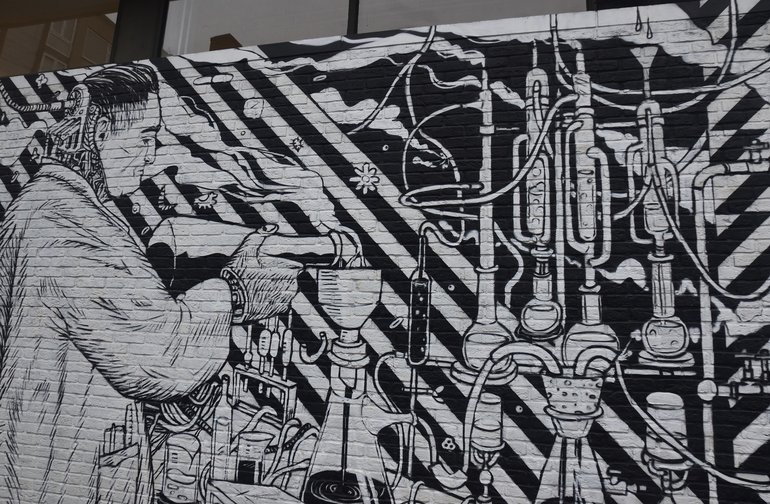 VTML Tip: Make sure you walk around to the other side of the school to see another mural by them. 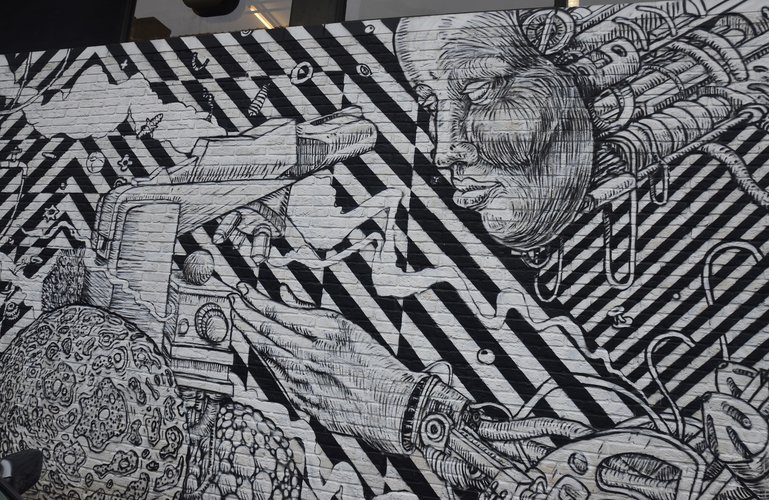 The other half of the Bier en Brood mural

Located on Baan is a mural that I was looking forward to seeing by Lastplak. This shows some of the Rotterdam’s great architectural achievements like Markthal, the Cube Houses and the Erasmus Bridge. In case you haven’t heard of Lastplak, they are an artist collective made up of artists with various backgrounds. We were fortunate enough to see them at work when we were at NDSM in Amsterdam and it was a truly amazing experience! But that is for another blog. 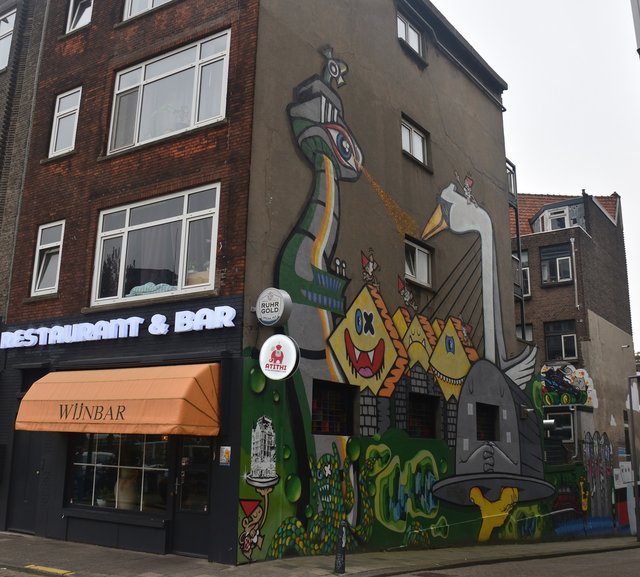 From here we headed to Witte de Withhof (Whitey the white street), where within in a couple of minutes’ walk there are so many amazing pieces of street art. If you are looking for a relaxed place to hang out, this is a great place to go. There are tons of cafes and restaurants and some really cool hostels.

First stop was this neon sign with an Andy Warhol quote: 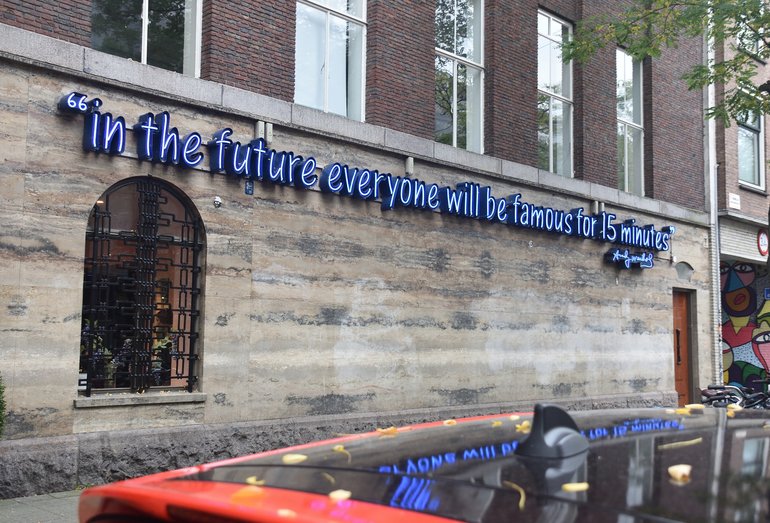 This became Warhol’s most well-known statement but whether he actually said it or not is something we may never know.

As you can see from the previous picture, this is just a couple of steps from the Warhol neon. I like this mural by Edward Teeuw because it has a Picasso / Dali feel to it. 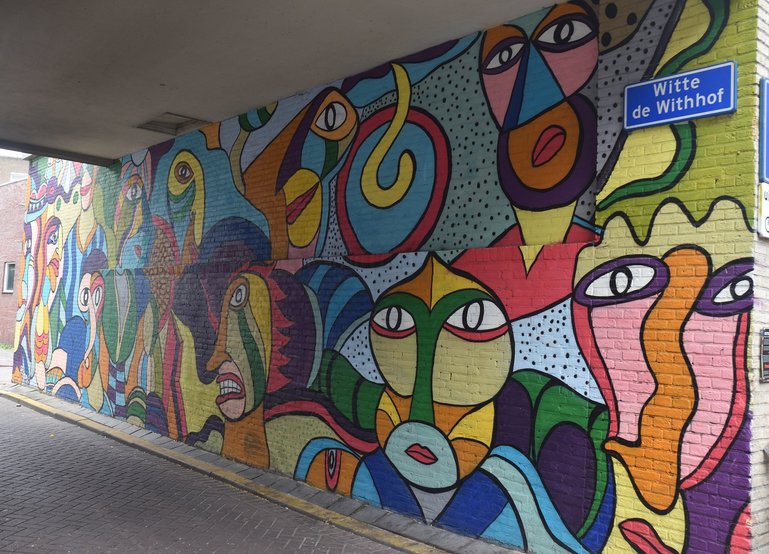 If you are looking for interactive street art, just head up the street for a mural created for the #MakeItHappen campaign. It allows you to climb up the wall for a photo op.

Here I am being a part of street art in this mural by Daan Botlek called On the Way to the Top.

Not far away is this mural by Tymon Ferenc de Laat at the corner of Eendrachtsstraat and Witte de Withstraat called Mr Merida. This colorful mural has South American influences. I especially like the bicycle in front. 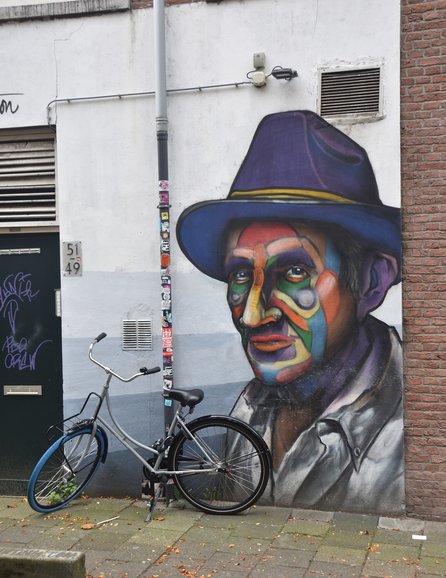 Across the street from the Tymon mural this one by Ox-Alien and Mark Goss. It is located just outside The White Monkey bar. I especially like the faux wood grain that frames this mural. I can't say I have seen this done before.

Next up, we are getting 2 for the price of 1. There is even a story…

The Love Birds are located on the corner of Boomgaardsstraat and Witte de Withstraat (74). These are 2 separate works by Robert Rost and Tymon Ferenc de Laat. On the right is a magpie holding a diamond ring. Above the mural is a marriage proposal from Tymon. 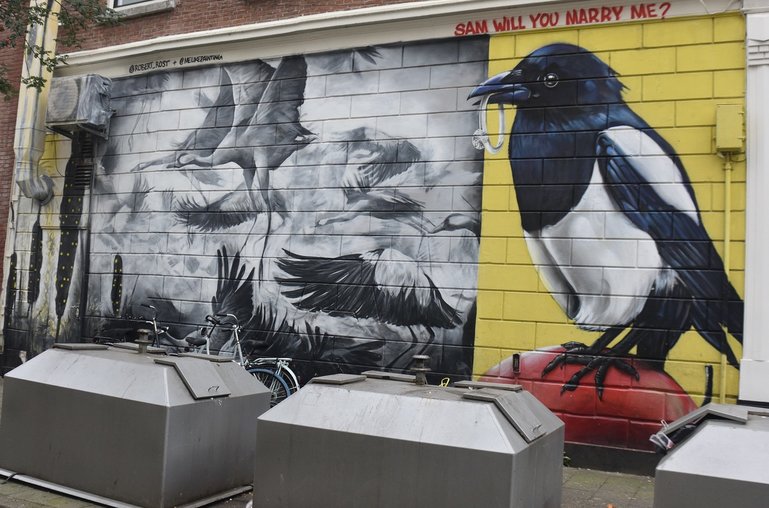 Wandering over to Oude Westen to see a couple more fun pieces. Our first stop was Oude Binnenweg, one of the few remaining pre-WWII streets. The main reason for our stop here was to see Fikkie, the beloved dog statue. Locals treat it like a real dog and provide it with a water bowl in the summer and a scarf in the winter. TOO CUTE!

Notice the little poo in front. This was commissioned by the city’s waste management to raise awareness to litter and trash. 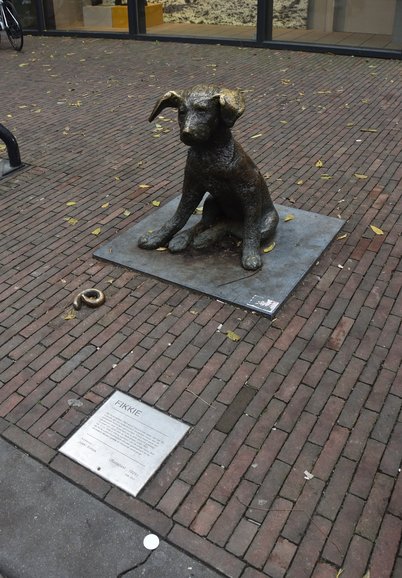 The next mural is on the street behind this statue on Boomgaardhof.

While Joren Joshua and Ilse Weisfelt were creating "Jazz" they encountered all kinds of challenges from weather, permit issues for traffic, and incorrect measurements of the building. I think this diptych turned out well in spite of the turmoil. 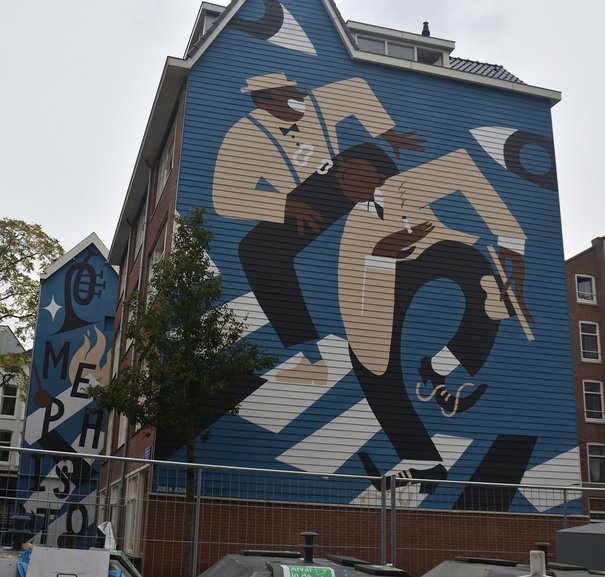 Probably my favorite mural in Rotterdam is this one called Urban Jungle. It is really special because it has its own statue in front of it, check out the fox. Look closely! I was standing in front of it and almost missed it.

Created by Eelco, his goal is to bring nature back into the city through his work. This is located on Bloemkwekersstraat at the corner of Nieuwe Binnenweg.

If you look left of Urban Jungle, you will see another mural by Edo Rath and Ox-Alien. 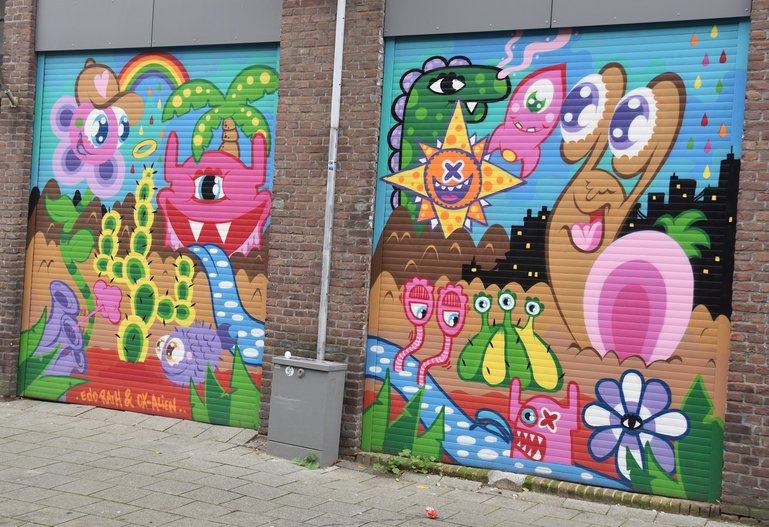 Mural by Edo Rath and Ox-Alien.

Last but not least, is Delfshaven

This old section of Rotterdam is special for a couple of reasons. It survived the Rotterdam Blitz of World War II unscathed by the bombs and fire. For Americans, it is important because the Old Church (Oude Kerk) located here is where the pilgrims had their last service in 1620 before sailing off for the New World to find Plymouth, Massachusetts. There is also a windmill, old bridge, many wooden boats, and a street art tunnel. 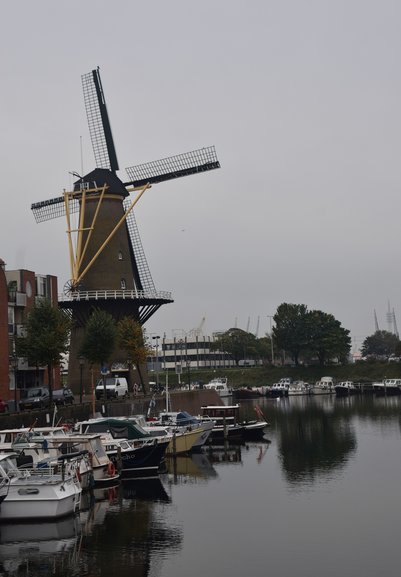 Getting to Rotterdam's Delfshaven

If you have time, you can walk here and it will take approximately 30 minutes. If you are pressed for time, take the underground or a tram or bus.

The underground is easy to use and the trains come fairly often. Trains arrive about every 10 minutes and you take it to the Delfshaven stop. When you come out of the station, there is not a sign that directs you to the old section, just head towards the buildings that look old (only a couple of minutes walk).

To wander around and see the sites here, plan on about an hour. 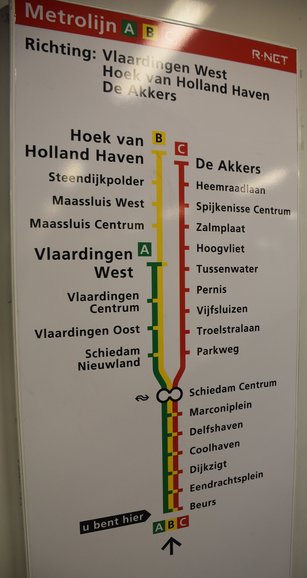 As you are walking around Delfshaven on the right, you will see Aovertunnel which is a street art tunnel. While it is small, it has several large murals by local artists. Make sure you pop in to check it out! 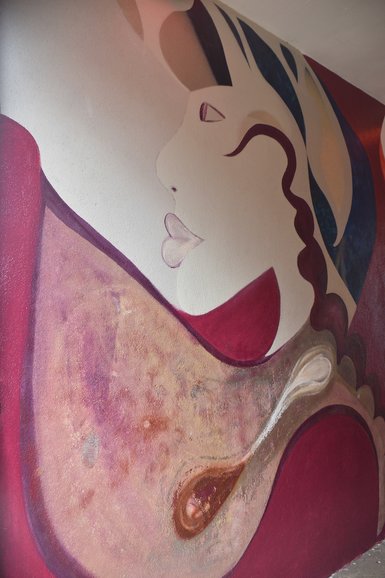 If you are looking for a city filled with historical monuments, then Rotterdam is not the city for you to go and explore. Yes, there is some history that still exists but most of it was destroyed in WWII due to bombing and fires.

Yes, I enjoyed Rotterdam when I was a teenager but I enjoyed this even more this time around because it has continued to keep moving forward as a progressive city. If you are looking for a different kind of city filled with modern buildings, street art and a fun time to be had by all, then head here. You won’t regret it! It is very easy to walk around and navigate.

Is Rotterdam a city you would like to visit? What are you most interested in exploring there? Let me know.

I hope you enjoyed the short View Thru My Lenz.

Hi, I am Nina!! I love to travel and love to share my knowledge with others to help them make their travels seamless. I have been traveling to Europe since 1990. I have completed many of my bucket list items like staying in the Ice Hotel, dog sledding, hot air ballooning, and a helicopter ride to the Grand Canyon just to name a few. I went to art school and have a Bachelor of Fine Arts degree, so I love pulling in my love for the arts, especially street art, as I make my way across the world. If you are interested in seeing more of my blogs, check out my page at www.viewthrumylenz.com/ 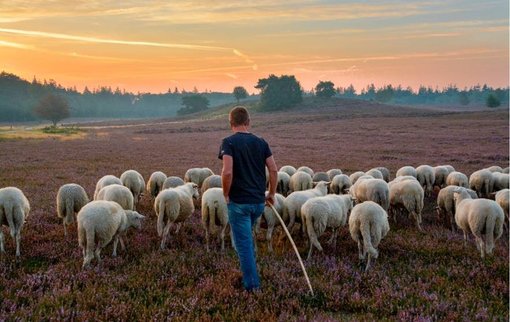 Top 5 Things To Do in Heerde, The Netherlands

Only a short drive from Ljubljana, discover Slovenia's most spectacular natural sites – the famous Alpine jewels of Bled, Bohinj and Bled Vintgar Gorge together with the medieval town of Skofja Loka.