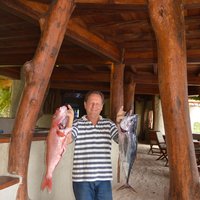 My wife Silvana and I live permanently at Rockwater Resort, on the southern island of Tanna, Vanuatu. Tanna means "earth" in Tannese. The home of cargo cults, the most accessible volcano in the world and traditional, peaceful people. It is an island of contrast, stark black volcanic sand and pure white coral sand beaches fusing into each other. Uncrowded surfing or ash boarding down a live volcano. Tanna has lush rainforests and fat cows grazing in a ecological haven. Some Tannese are gentle artists others tough pragmatic businessmen, yet all are superstitious, even the politicians, consult their sorcerers or "wise men" on important issues. With a land surface of 565 square kms and a population of 30,000, the people are scattered throughout the whole island where each meter of land is owned and cherished. Tanna is about a million years old. In 1777, Captain Cook was attracted to Tanna upon seeing the distant glow from Yasur Volcano and anchored in the bay he called Port Resolution after his ship the HMS Resolution. It is said that he pointed downwards towards the land, and asked the local chief for the name of the island: the chief responded "Tanna", meaning earth, hence the island got its name. Early trading was in sandalwood. As the Tannese were at war with the neighbouring island Erromango, 30 km away, the shrewd Tannese negotiated with the trading ships: "We will supply you with sandalwood and pigs in exchange for captive Erromangans you bring to us". The irony being that Erromango had much larger sandalwood forests than Tanna! Christianity came later (1840's). The first were westerners, which were killed and eaten, then Polynesians who could not speak any of the numerous languages were sent by the religious organisations hoping they would not eat people their own colour. That didn't work either. Due to the Tannese natural distrust of foreigners, compounded by diseases introduced by the newcomers, foreigners were accused of bringing sorcery to the island. Many suffered Tanna Chief's retribution. Tanna has now a co-existence of cult followings, traditional custom and western religions. With an average of 30°C, and little rain, Tanna is holiday friendly. Nights can be cool especially on top of Mt. Yasur Volcano where small gale winds whip up a black sand storm within minutes. Bring a wind jacket as precaution. To really see Tanna, a minimum of 3 to 5 nights is recommended; splitting half your time on each side of the island.

Traveling to Tanna Island ...the one with the live volcano