Three French gorges every cyclist should climb in their life

Having recently completed a cycling trip all through France from the northwest to the southeast, here are three beautiful gorges that any lover of bikes needs to tackle before they die. For us, they have just the right mix of physical challenge and breathtaking scenery.

We have listed these in order of personal preference, but you could easily piece the three together into one week long trip, by doing them in reverse order. 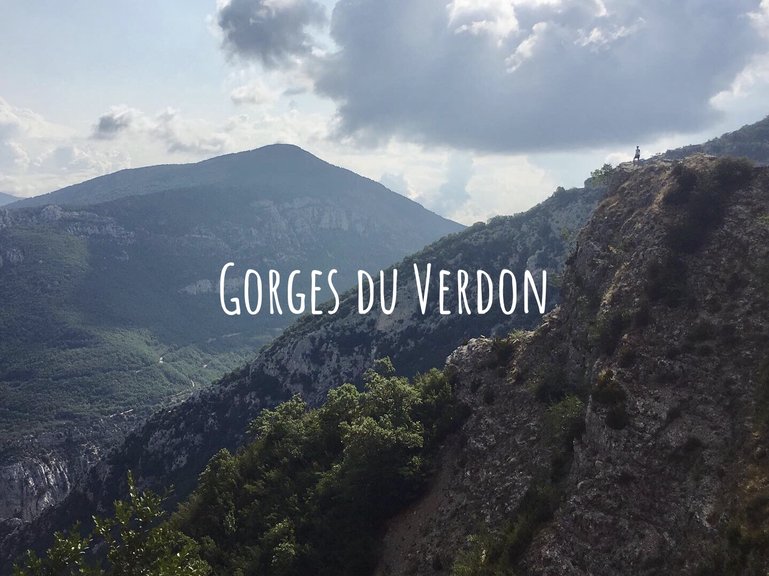 One of the wonders of Provence, the Gorge du Verdon is the second largest gorge in the world (behind only the Grand Canyon in USA, which strictly speaking should be called the Grand Gorge as it was carved out by the Colorado river).

Moustiers-Ste-Marie is an idyllic little town and worth a visit in its own right for a day before you climb. But setting off from there in the morning takes you past the aquamarine waters of the Lac de Ste-Croix and soon brings you to the start of an incredibly dramatic day’s riding.

Important note: the main route people follow is along the northern edge of the Gorge, but it is actually much more picturesque (and quieter in terms of traffic) to do the southern side signposted the Corniche Sublime.

There are some short stretches of very steep climbs with switchbacks but otherwise for the most part it is all gradual, and around every bend and turn you are rewarded with breathtaking vistas of this natural wonder.

Be sure to stop off at the Hotel du Grand Canyon and have a drink on the terrace at the back which overlooks a huge bend in the gorge. It’s also about halfway in terms of climbing as the road descends from there before you begin the next stretch.

Once you reach the Balcons de la Mescla you have conquered the gorge. From there you have a great downhill and then an almost unnoticeable gradient to bring you into the cute little town of Castellane. 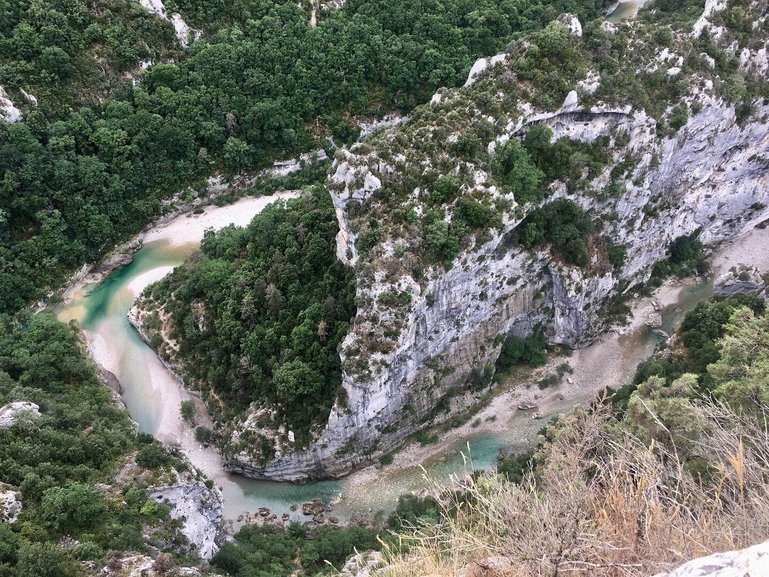 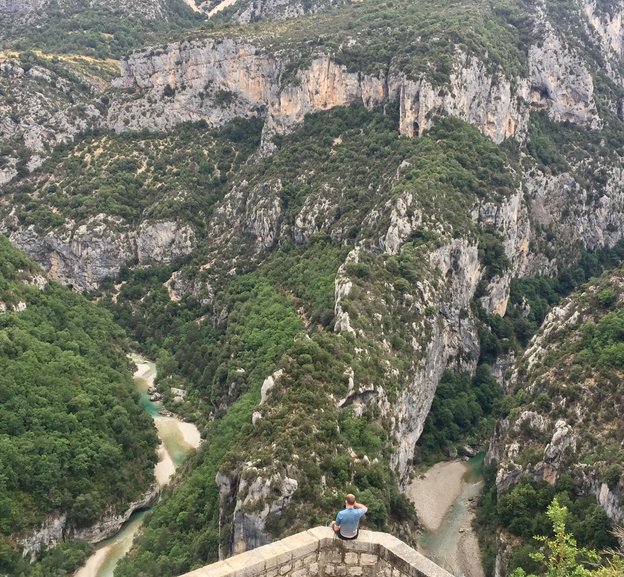 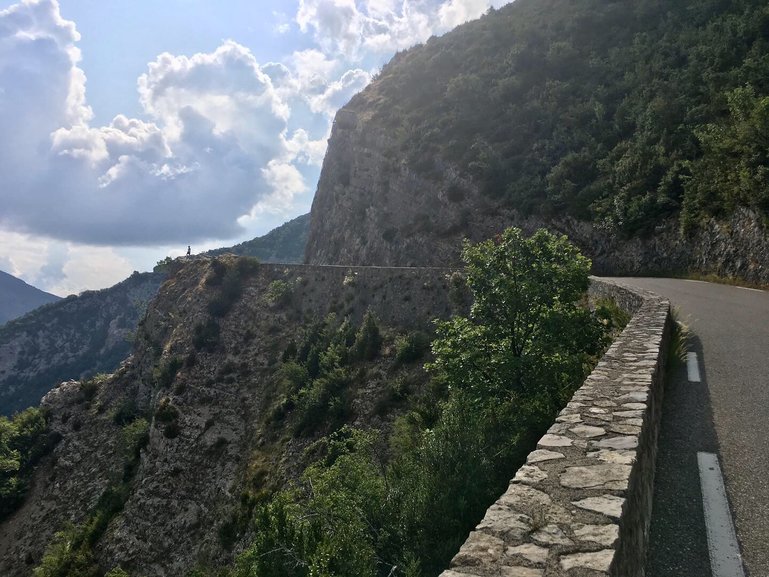 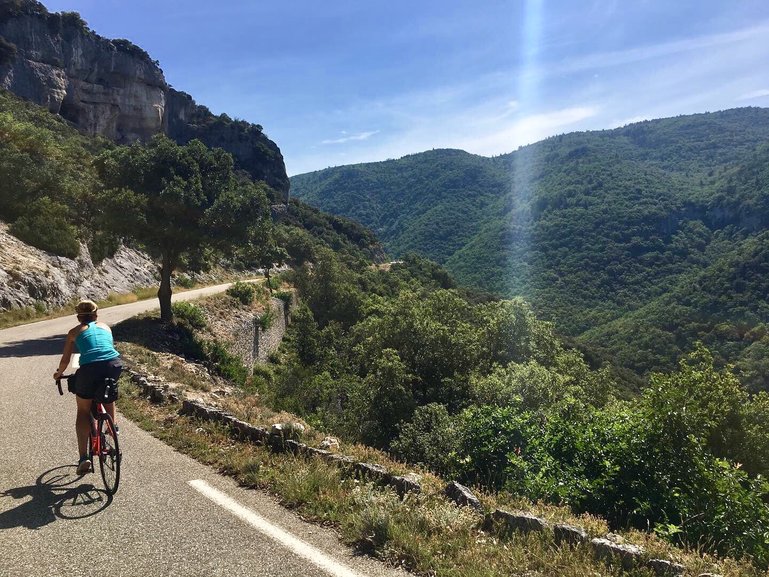 This one is an absolute pleasure! According to the laws of physics it almost shouldn’t be possible, yet somehow for very title effort you get to ascend nearly the height of a mountain and get the epic views to go with it.

The gradient is around 2-3% the whole way which means it isn’t a grind like a normal climb. We could stay well out of our easiest gears and cruise along quite comfortably, energised at every bend by the rising views and the fact you feel like you are getting away with murder by ascending a gorge without much effort. It has been described as “the best 30km of cycling in all of France” and it’s easy to see why.

There are a couple of amazing arches left where the road has been tunnelled through the cliffs, and plenty of places to stop and admire the big views.

The route then ends in Sault, which is a starting point for the “easy” route up the iconic Mont Ventoux, so you could always add that into your itinerary for the next day if you’re feeling adventurous and want more of a challenge. 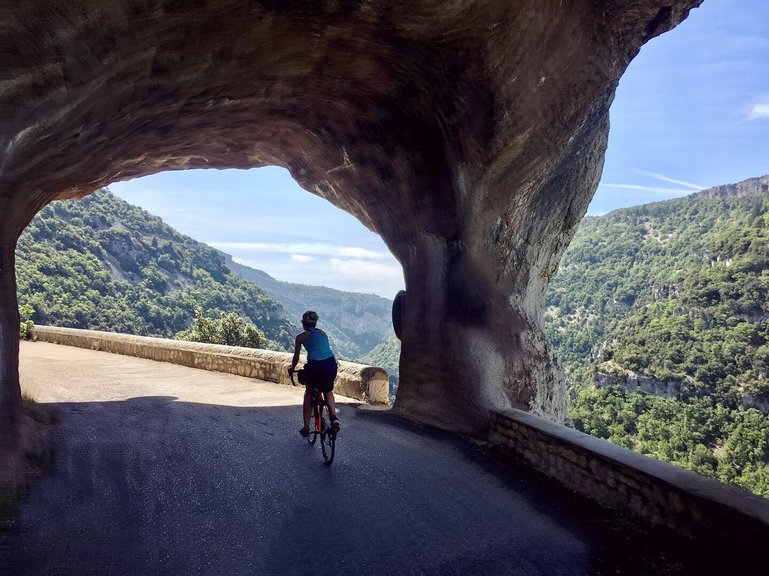 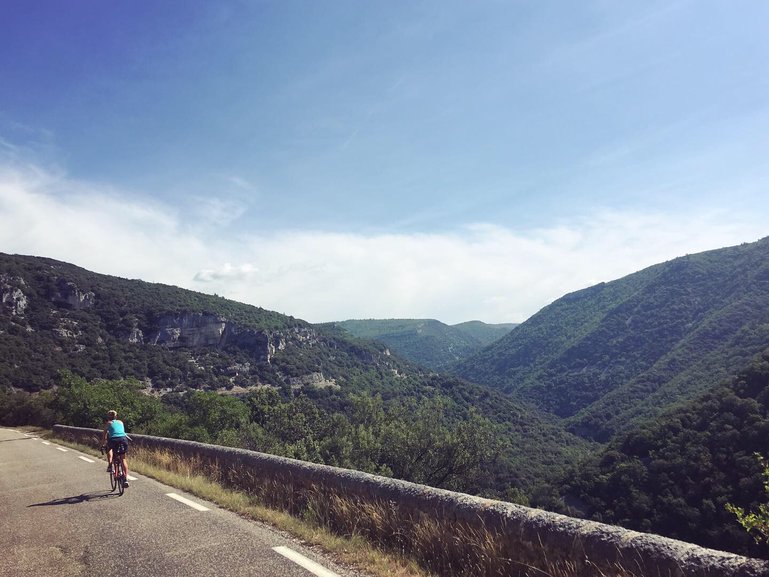 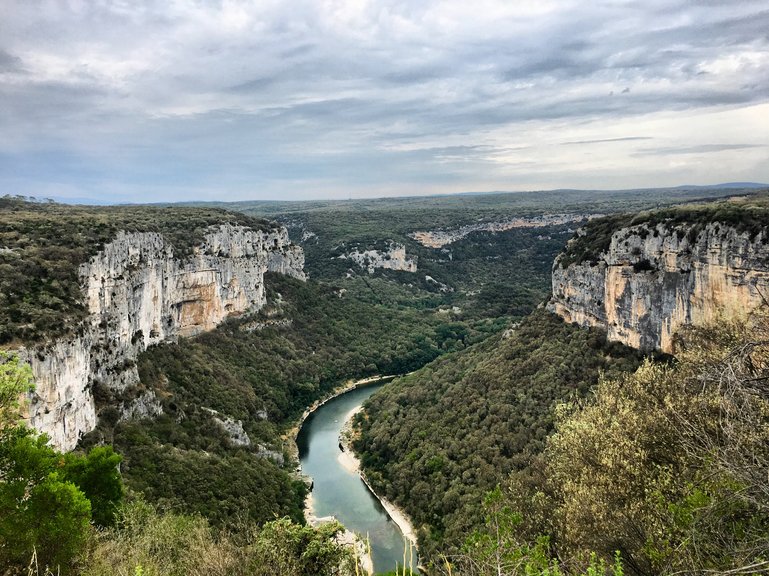 This one is a little tougher than Gorge de la Nesque, although on paper it should be easier as it is less elevation. However the gradient is a bit steeper, and there are a lot of “false finishes” where you think you’re at the highest possible point, only for the road to dip briefly and then climb again. But if you’re prepared for all of that (which we weren’t!) then you will be absolutely fine. And again, the views are well worth the effort, with multiple viewing platforms and plenty of places to hop off the bike and stand and stare at the magnitude of the earth. It’s a real “effort = reward” kind of ride.

And as with the others listed here, the actual Gorge section is only half of the total distance. But the start and end points are much nicer, and allow you to make more of a day of it. 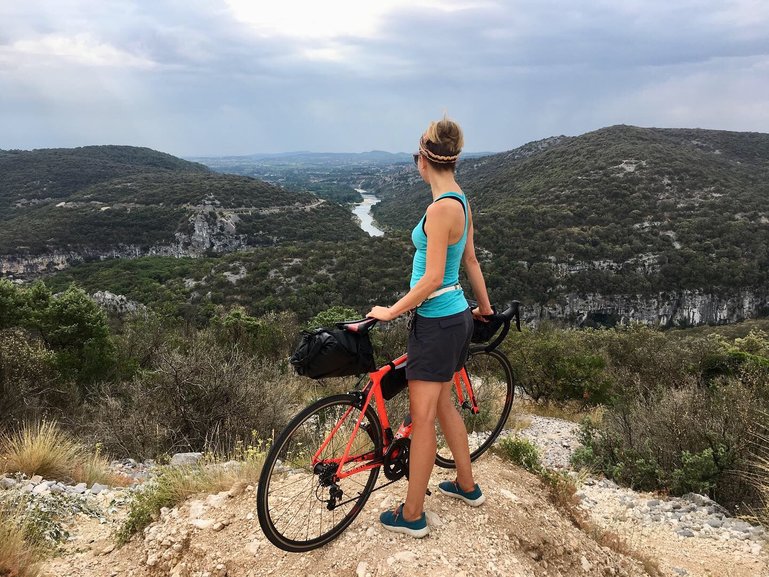 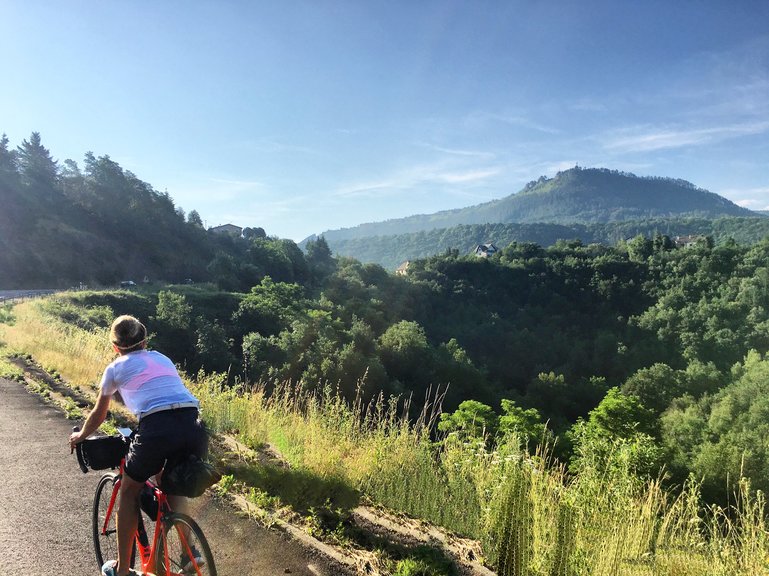 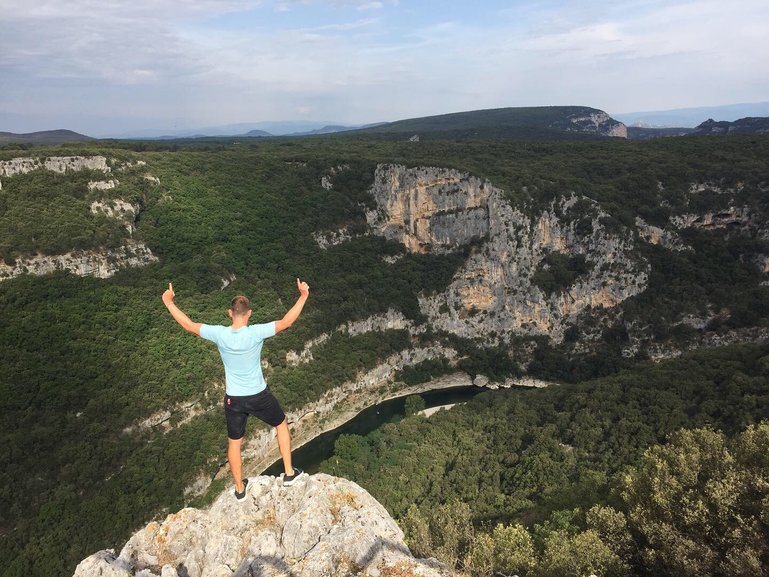 Hey, we’re Kate and James - cycling enthusiasts, lovers of travel, and husband and wife. We’ve been to over 50 countries together and lived on three different continents (in London, Sydney and Malawi). We’ve been lucky enough to have had some amazing adventures, from horse-riding with gauchos to climbing active volcanoes. But our best days are those spent meandering through criss-crossed lanes by bike, slowly getting a feel for a place, enjoying the local views, foods, drink and company. After many years of having cycling as a passion and working in office jobs, we’ve decided to flip things around and spend our days focus... Read more 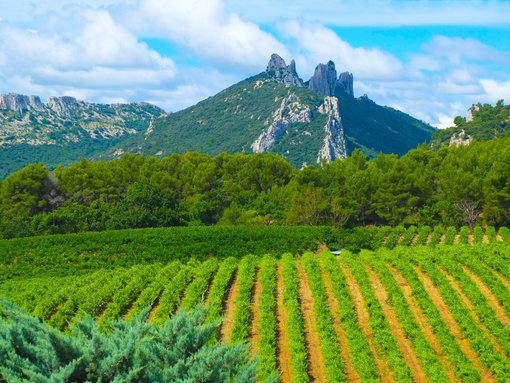 Suzette - A Beautiful Village in Provence 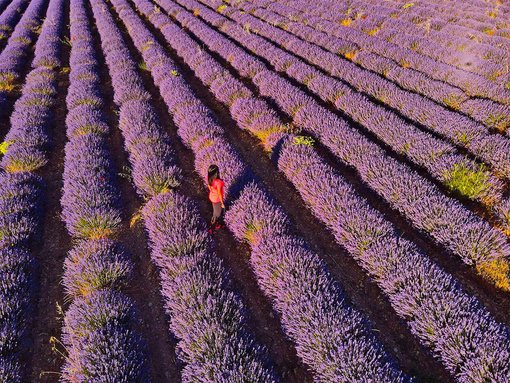