Bahrain is country number 187. I'm really excited to be able to creep a little closer to my goal of every country after the wipe out that was 2020. Bahrain is the third-smallest nation in Asia after the Maldives and Singapore, but it isn't quite what I expected. I wasn't exactly anticipating a stereotypical desert island with one palm tree in the middle. Just a flat, arid island in the Persian Gulf, with maybe a few palms, joined to Saudi Arabia by a causeway. ( I can see it twinkling below as we land in the dark.) But it turns out to be an archipelago made up of 50 natural islands and an additional 33 artificial islands. They're still reclaiming land – one project currently underway is a Palm Resort like the one in Dubai. To be fair to me, the area known as Bahrain Island is definitely the largest by a long way.

UK citizens qualify for a visa on arrival and also don't need a PCR test to get on the plane, but you do have to get one as soon as you arrive. It's mandatory to download the BeAware app and book everything via that. (I'm not sure I would have chosen that name. At a swift glance it says Beware Bahrain). And you have to fill in a vaccination declaration form on the app too. It's all relatively straightforward.

View of Manama from Muharraq Island

The Flight to Bahrain

The flight attendants are all dressed as if they are working in an operating theatre - totally covered in PPE. And the food is pretty bad. They've forgotten to put any gravy on my lumps of tasteless beef. But otherwise it's comfortable enough on my Gulf Air plane.

The airport is modern and calm and there's hardly any queuing. Even the line for the compulsory PCR on arrival test isn't too taxing. The clerks are super friendly and my result arrives before breakfast next day - all as promised. The only irritation is the argument with the taxi driver taking me to my hotel. He smiles, refuses to turn on his meter and charges me 8 dinar (about £15) for a two kilometre trip. (The return, metered fare is 3 dinar).

The airport, and my hotel, are on Muharraq Island. It's home to artificial beaches, restful gardens, dhow shipyards and a small restored Islamic fort. Arad Fort was built to defend its own island (though it wasn't successful in keeping the Portuguese out), but is now joined onto Muharraq. I'm told there are some nice sunset views across the bay to the scrapers of Manama. So I decide to go look on my last afternoon. I can testify to the views, but not the sunset. I fall asleep and set off too late. Then I go the wrong way and eventually arrive, just as it gets dark. 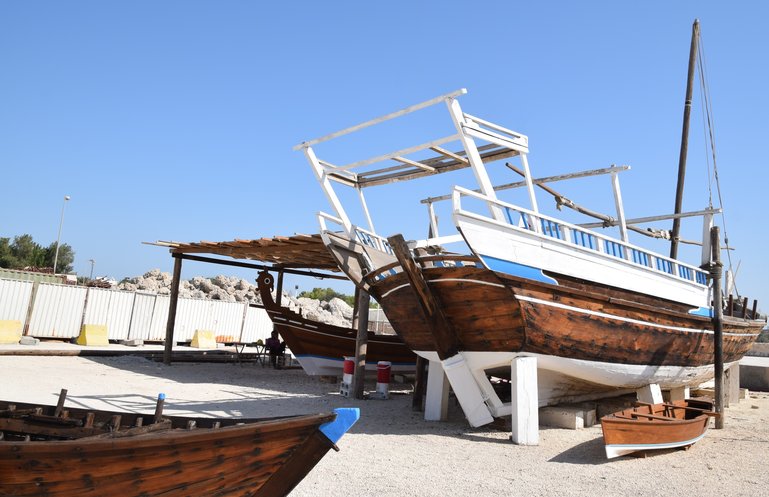 Dhows on the quay at Muharraq Island

The capital and largest city is Manama, on Bahrain Island, though its hard to tell where one sliver of urbanization ends and another begins. The only gaps between buildings are the areas of reclaimed land, bulldozers sitting ready. I take my cue from the many linking causeway bridges.

My second misconception is my plan to walk to the tourist sites. There aren't that many of them, but they're very spread out and much too far away. Besides, its 35 degrees outside, which is roasting after autumnal England. So I commandeer a driver – at a rate set in advance this time.

It soon becomes apparent that Manama consists of an ever increasing number of fancy skyscrapers and a large number of giant shopping malls. Some of them full of very expensive shops. Bahrain made its money first through pearls and fish and then through oil and gas. But it has also developed the first post-oil economy in the Persian Gulf, the result of decades of investing in the banking and tourism sectors. Many of the world's largest financial institutions are based here. It's definitely a high-rise, high income economy. Some of the top end hotels seem to be having a Las Vegas style competition to produce the most extraordinary glittering edifice. The winner is probably the swirling, almost hexagonal tower that is the Wyndham.
Though the most promoted building is the Bahrain World Trade Centre, with its sail like twin towers. It features on all the photographs of Bahrain and is the first skyscraper in the world to integrate wind turbines into its design. (Don't ask me where they are.) 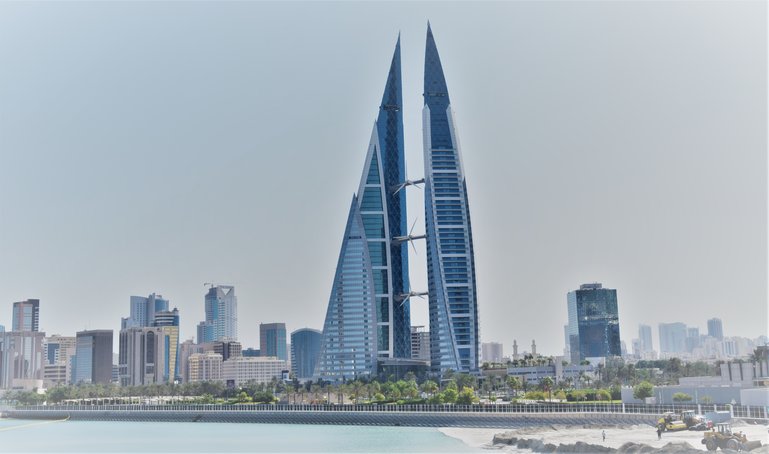 But Manama isn't entirely scrapers. There's a fascinating older centre with a labyrinth of winding streets forming the souq. It's a great place for a wander, shady cafes, drinks booths serving a huge range of juices and my favourite lemon and mint sherbets. And hundreds of open stores and stalls serving a wide range of goodies. As always I'm drawn by the colourful and fragrant spice shops. ‘Saffron, saffron', the hopeful vendors call after me. 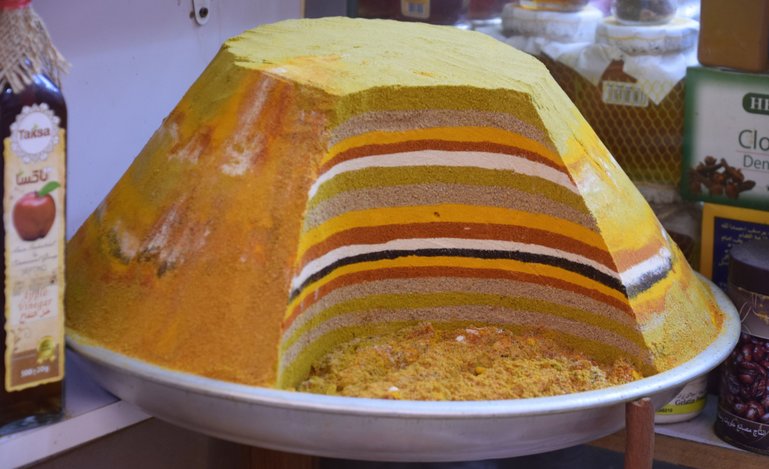 Spices in the Manama Souq

There's a cool modern souq too, in a double storeyed white building – the Bab el Bahrain. This is more tourist orientated and the stall holders therefore more persistent in their entreaties: ‘Come in - looking is free…'

More expectations confounded. Bahrain has some interesting historical attractions. It is the site of the capital of the ancient Dilmun civilization, which dates back 4,000 years to the Bronze Age. There are seven stratified layers, relating to the Kassites, Greeks, Portuguese and Persians and it was awarded UNESCO World Heritage status in 2005. 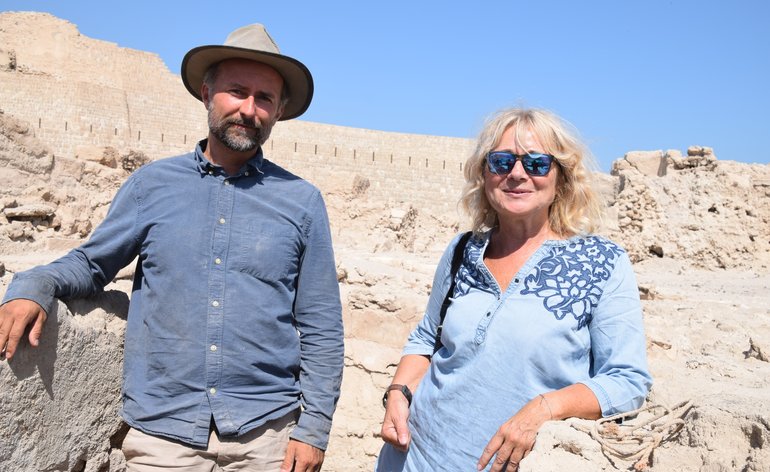 Sue and Steffen at the Dilmun Dig, Bahrain Fort

I had never heard of the Dilmun Civilisation before, but I'm lucky enough to get a guided tour of the excavations. The Danish archaeologist in charge, Steffen Lauersen, (he's written published books on the subject) shows me the walls, halls and streets of the various places he is uncovering, He says they chiselled the giant blocks with tools made of natural bronze alloy. It's an unexpected, but hot and dusty treat. They only have one small awning to provide shelter.

The Dilmun ruins abut (and run underneath) a large Islamic fort, the Bahrain Fort. This was renovated by the Portuguese, who ruled Bahrain from 1521 until 1602. There are some beautiful Islamic arches and more great views across the jade water.
In the late 1800s, following successive treaties with the British, Bahrain became a protectorate of the United Kingdom. In 1971, it declared independence. as an emirate an converted to an Islamic constitutional monarchy in 2002. Most of the signage is in English. ‘Suitings Corner', over a tailor's shop is my favourite.

And of course there are plenty of mosques. The Al-Fateh Mosque is one of the largest mosques in the world, with the capacity to accommodate over 7,000 worshippers at a time. The dome is currently the world's largest made of fibreglass. The mosque was built by the late Sheikh Isa bin Salman Al Khalifa in 1987 and is named after Ahmed Al Fateh. Ahmed ibn Muhammad ibn Khalifa was the first monarch or hakim of Bahrain, commonly referred to as Ahmed al-Fateh (the conqueror). 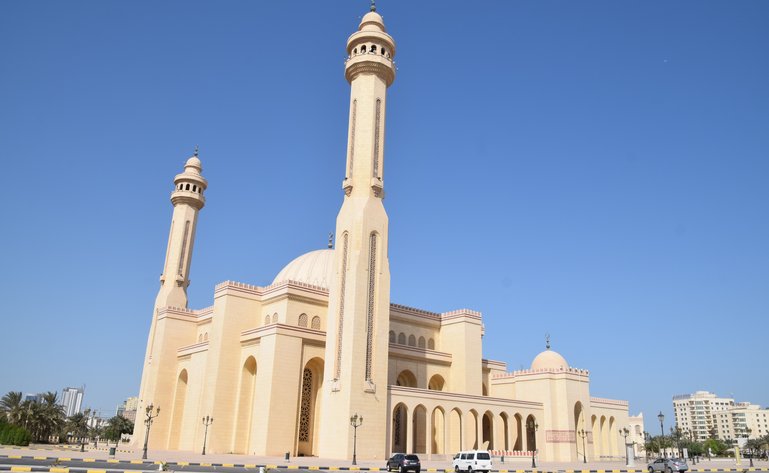 Bahrain has a reputation for being seedy - the place where the Arabs go to' let off steam'. It's also known for violation of human rights. I did not see any of this. Perhaps I was lucky and didn't look hard enough. The people were friendly, I felt safe and I had an interesting visit.

Hi I'm Sue and my dream is to travel to every country in the world! According to Nomadmania.com I’m currently the sixth most travelled person in the UK and the 98th in the world. Until quite recently, I thought that visiting every country was an unattainable dream, in terms of both cost and danger, countries stricken by war. But then I came up with A Plan and what looked like an achievable goal. There are now only 8 countries left to visit. Follow my posts and Instagram to see how I'm doing. 'Because It's There' - George Mallory.....

Best Of BAHRAIN in One Day

This tour covers the best of Bahrain in 8 hrs. From city to desert, from modern to tradition,from religion to history. With local guide.

From BAHRAIN to SAUDI ARABIA by car (day tour)

We take you to a new adventure. From Bahrain to Saudi Arabia, driving through King Fahad Causeway 25 Km in the Gulf. With amazing drive crossing the Arabian Gulf. With unforgettable experience. A tour of two countries in one day.