Sultanahmet Mosque is a structure highly admired by all visitors. An example of classical Turkish art, it is the only one of its kind to be originally built with six minarets, and stands out on the horizon of the Bosphorus city. It is also known as the Blue Mosque for the Iznik tiles that adorn its interior. Meanwhile in the structure through its three doors, visitors are welcomed by its rich and colorful ornamentation, including engravings, tiles and stained glass that complement the grandeur of its decoration. 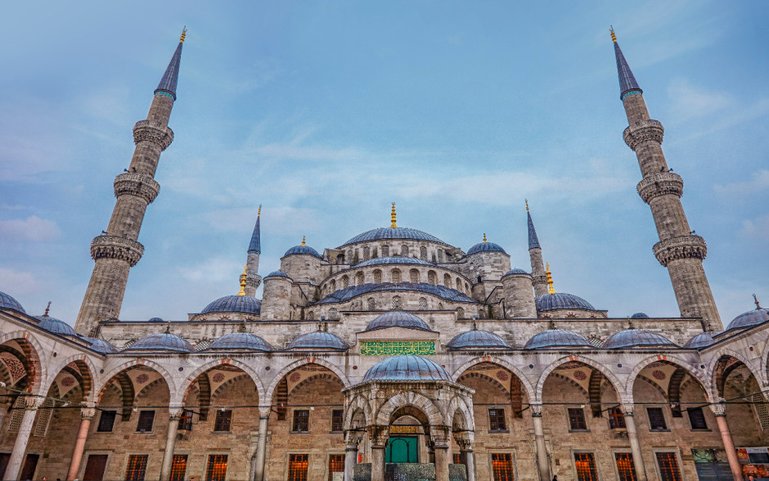 Museum of valuable collections of the famous Ottoman Empire. Collection of jewelry and weapons are incomparable. Still the part of relics calls attention of the world by the pieces of weight, type of Staff of Móses, Sword of David, arm of Saint John the Baptist and exc.
Guided tours in the Harem section require the purchase of additional tickets. 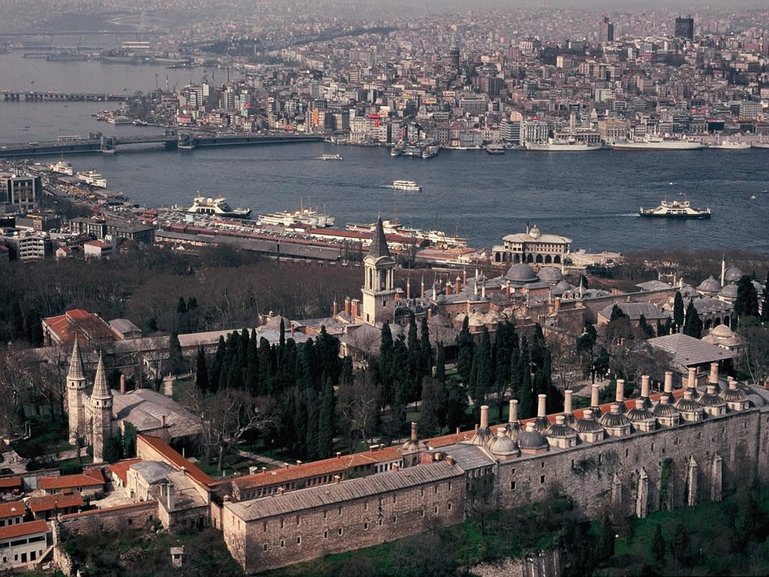 Built between 532 and 537 in the ancient center of the city by Byzantine Emperor Justinian 1, Hagia Sophia, or Church of the Holy Wisdom, is the oldest cathedral in the world, and fourth largest in terms of area. A masterpiece of art, history and architecture, he served two years of Abrahamic religions as the central church of the Byzantine Empire and 477 years as a mosque, before being converted into a museum in 1935.
Hours of Operation: Monday-Sunday 9:00 a.m. to 6:00 p.m. 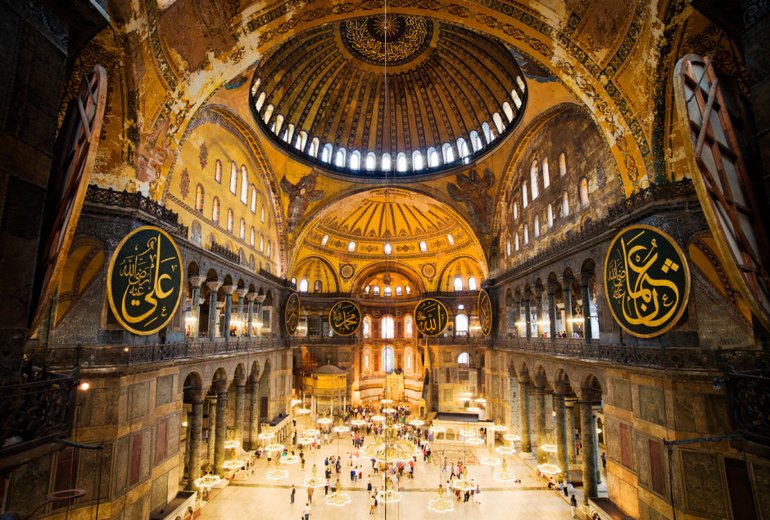 The largest cistern of the penthouse in Istanbul, after the basilica we quoted nearby. It built during the reign of Justinian I (527-565) to provide water for neighboring palace. Length 143m, width 65m, with total area of ​​9,800m2.
Hours of Operation: Open daily from 9:00 am to 5:00 pm

This palace was built and licensed between 1843 and 1856 by Sultan Abdulmecit 10. It reflects Western influence on Ottoman architecture in the late 1800’s. The design contains eclectic elements of baroque, rococo and neoclassical style. He served the residence of Atatürk during the early Republican Period and received many high-level foreign guests before being converted into a museum.
Opening Hours: Daily open 09:00 – 15:00 (except Monday and Thursday.)

Located in the Galata district. It was first built in the sixth century by the Genovese’s. But later rebuilt in 1348 beyond the city walls to defend the region from external attacks. There is a panoramic view of the city under the Bosphorus, and still the golden horn and the old part of the city. Nowadays, on the balcony floor there is a cafeteria serving sweets with a beautiful view.
Hours: Daily 9:00 a.m. – 7:00 p.m. 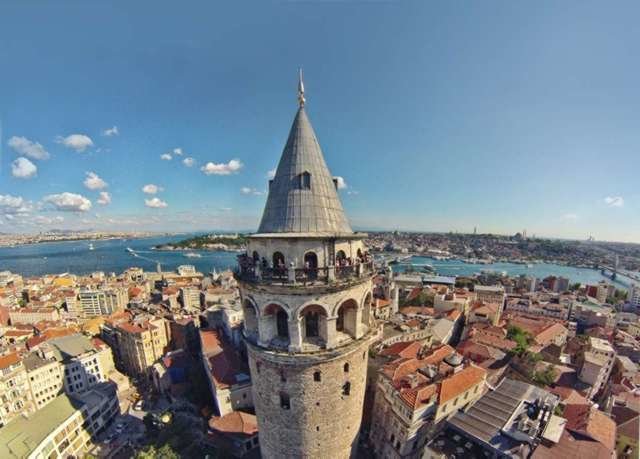 First built as part of a monastery in 534. Later in the 13th century, it underwent a major renovation with the leadership of Theodore, and won its magnificent mosaics and frescoes that are among the best examples of Byzantine art.
Hours of Operation: Daily open except Wednesday 09:00 – 18:00

Founded in 1981 by painter and archaeologist Osman Hamdi. This museum created with perspectives of the modern world and houses belonging to many ancient civilizations that have left their marks in history for Anatolian peninsula. The museum located in the garden of the Topkapi palace and managed under three steps The Archaeological Museum, the Museum of the Ancient Orient and Kiosk Tiled Museum.
Hours of Operation: Daily open Monday-Sunday 09:00 – 16:00

It is a very recent museum and built with new technology systems. It is a museum where you can follow the fall day of Constantinople. You will know the army of the Turkish forces leader, Mehmet Segundo, who later earned the nickname of Fatih, the conqueror.
Opening Hours: Daily Open 08:30 – 17:30

Founded by the Suna Foundation and Inan Kirac, one of the richest families in modern Turkey, the museum houses three permanent collections including Anatolian weights and measures, tiles and Kutahya ceramics and oriental art consisting of more than 300 paintings.
Among the most well-known pieces, the picture of Osman Hamdi Bey is more famous than well-known with the proper name “Professor of Turtles”.
Opening Hours: Daily Open Tuesday-Sunday 10:00 AM – 7:00 PM. Sunday 12:00 – 18:00

The first major museum in Turkey dedicated to the history of transport, industry and communication. Located on the banks of the Golden Horn, its collection includes thousands of objects from gramophone needles to ships and aircraft.
Hours of Operation: Tuesday-Friday 10:00 AM – 5:00 PM, Saturday-Sunday 10:00 AM – 6:00 PM

Funded by the Vehbi Koc Foundation, this museum is housed in a renovated old mansion on the Bosphorus. Displaying a collection of archaeological artifacts, which won a European Union Prize in 1988.
Hours of Operation: Tuesday-Thursday 10:00 a.m. – 5:00 p.m.

The main building of the museum is a village built in 1927 by the Italian architect Eduardo De Nari for Prince Muhammad Ali Hasan of the Egyptian family. Purchased by the Sabanci family in 1950. In 1998 he was given the University of Sabanci along with his collections and furniture to serve as a museum. The mansion houses a rich collection of calligraphy and painting.
In fact it works as a temporary exhibition area.
Opening Hours: Monday, Thursday, Saturday, Sunday 10:00 a.m. – 6:00 p.m.

15 – The Museum of Innocence

Founded by the Turkish writer Orhan Pamuk, who won the 2008 Nobel Prize for Orhan Pamuk. The museum was born from the book of the writer’s novel that shares the same name: museum of innocence.

Historical documents, information documenting 700 years of history of the Jews in the Ottoman Empire. The work of sculptor Nadia Arditti to commemorate Turkish soldiers and fallen Jews while defending their country receives visitors at the entrance.
Hours of Operation: Monday-Thursday 10:00 a.m. – 4:00 p.m., Friday-Saturday 10:00 a.m. – 2:00 p.m.

17 – Museum of Islamic and Turkish Arts

First museum in Turkey to offer a joint exhibition of Turkish and Islamic art. Collection of rare works from various Islamic countries including precious examples of stone, metal, ceramics and glass objects, as well as manuscripts. Handmade Turkish carpets dating from 13 to 20 centuries. The lower floor of the rugs section houses a section of Ethnography displaying everyday Turkish from the ancient centuries.
Hours of Operation: Tuesday-Sunday 09:00 – 17:00

This mosque in the Tahtakale area, near the Egyptian Market (Seasoning), was built by the famous Sinan architect, by order Grand Vizir of Sultan Suleiman the Magnificent. Started in the year 1561, it is a classic Ottoman building, decorated with Iznik tiles from the 16th century, all of which show floral and fruit motifs.
Hours of Operation: Tuesday-Sunday 09: 00-12: 00, 13: 00-17: 00 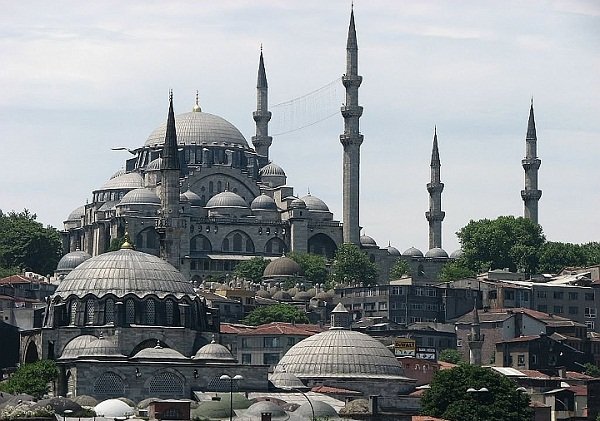 Sultan Suleyman (Suleyman the Magnificent), that the most powerful sultan of the dynasty left his immortal name through this mosque. Built in 1550-1557 by architect Sinan.
It is an example of the mosques of the sultans, which contain a Complex counting a madrassa (religious school), library, hospital, bathroom, kitchen of the poor to distribute to the poor, and a bazaar.
Resting on four massive columns, the dome of the mosque is 53 meters high and 26.5 meters in diameter. Its interior is subtly decorated, with the windows on the wall. Mihrab decorated with stained glass.

20 – Church of St. George of the Orthodox Patriarchate

The center of the Orthodox Christian world, this church hosts many relics, including the pillar in which Jesus was whipped and the remains of three great saints.

Located next to Ortaköy Pier, this mosque was commissioned by Sultan Abdulmecit to Karaber Balyan. The structure underwent restoration between 1960 and 1972. It is a baroque structure that features a single dome with two fine minarets. White stone was used for walls, mosaic and marble for the minrab, and porphyry for the pulpit.

Located in Eyup at the northern end of the Golden Horn, where one of the earliest followers of Islam, Eyyube El-Ensari was buried after he died during the harassment of Constantinople by Muslim Arabs.
Mehmed 2 ordered the construction of a sanctuary and the mosque on the site. The first mosque, which was completed in 1458, later suffered a fire, with the current structure built by Uzun Hüseyin Efendi between 1798 and 1800.

Complex of ancient pavilions and villas of the Ottoman Empire.
The first building was built during the reign of Ahmet I. in the 1706th century. The palace in its present form was built under the rule of Abdulhamit II. , in 1880, who wanted his seat of government beyond the reach of the bombing of the sea. Nowadays it is a museum of Iténs that originally belonged to the palace, including personal belongings of Abdulhamid 2 and gifts that he received, and the products of the Factory of Yildiz Porcelain still located in the premises of the palace.
Hours of Operation: Wednesday-Sunday 09:00 – 18:00

Written by Guide of Turkey

Hi, I am Omer from Turkey. We have private, luxury and guided tours in Turkey. If you want to explore Turkey, Please check out our website and tour packages. www.guideserviceinturkey.com Please contact us: guideturkeytr@gmail.com

Turkey has, or at least had, if the fascist dictator Erdogan has not messed that up along with everything else, the best local guides for tourists in the world. A professional tourist guide in Turkey had to graduate from the official travel guide school and be licensed as a guide by the state, and these guys are the best. Their depth of knowledge is encyclopedic, and they are, it some ways, disturbingly driven to pump the traveler full of an immense body of mostly useless info about whatever it is you are seeing. This is an a affliction common to all travel guides, the Turkey guides just know more than anybody else, and a lot of it is interesting. 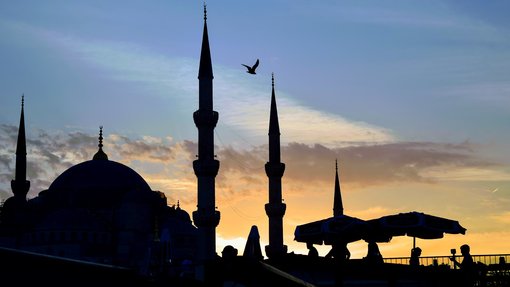