With nature and attractions all within one 692 square kilometres, there is more than enough to keep you occupied in the Exmoor National Park and the Surrounds.

Driving around Exmoor National Park is an easy way to see the surrounding rolling hills and moors.

There aren't too many places to pull over and take photos but you do have intermittent places to stop. You can take photos of this area of outstanding beauty or the wildlife you should see as well as taking in the walks.

A Wild Pony on the moors of Exmoor National Park

Ponies and Deer also call this place home although I didn't see any Deer, you might be luckier.

If you go off the main roads, be aware, you could be heading down single lane roads, with locals coming the other way quickly on blind corners. 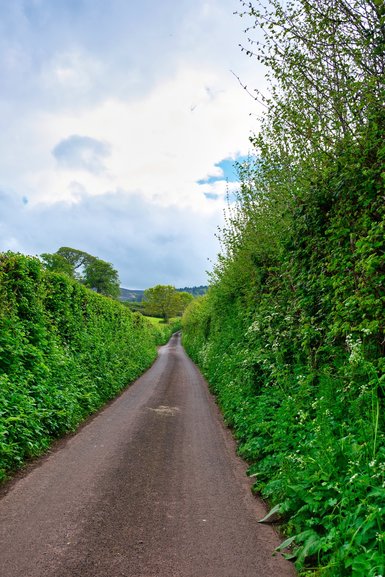 A single lane road on the back roads of Exmoor

Houses and farms open onto roadsides, so also watch out for farm animals and children.

There are also steep roads in this area including 16% and reputedly the steepest road in England at 25% at Porlock Hill. They also have hairpin turns on these steep roads and need a fair bit of power to get up them.

The countryside around Somerset, with farmland just off the main roads

You could also take a Steam Train ride on the West Somerset Railway along the coastline. You can make a day of this with a Rover ticket and as it runs 5 times a day, you could get off and catch a later train back.

There is a whole lot more to see in the is area with many villages, attractions and walks. Some are listed below.

One of the best waterfall walks in Exmoor National Park is at Watersmeet. You can park in designated places on the side of the road, in pay and display parks and then take the track, across the road, down.

The track down is steep but it only takes a few minutes and you are greeted by a fantastic waterfall with a great view from the bridge across the river. 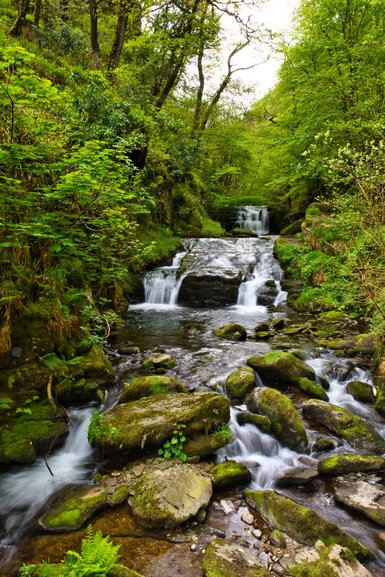 The beautiful cascade that is Watersmeet

There are walks in the area, along the river and into the woods. There is also a cafe and toilets next to the falls, to finish off your afternoon before heading back up to your car. 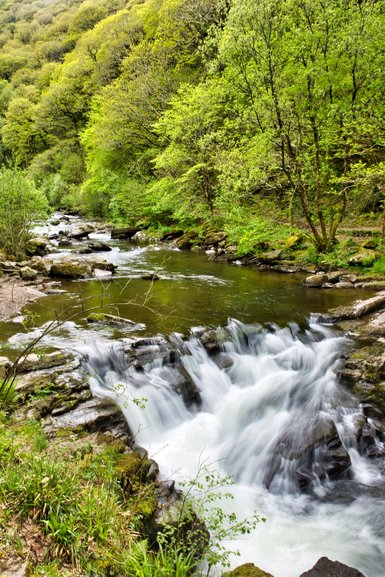 The views of the river from the track alongside 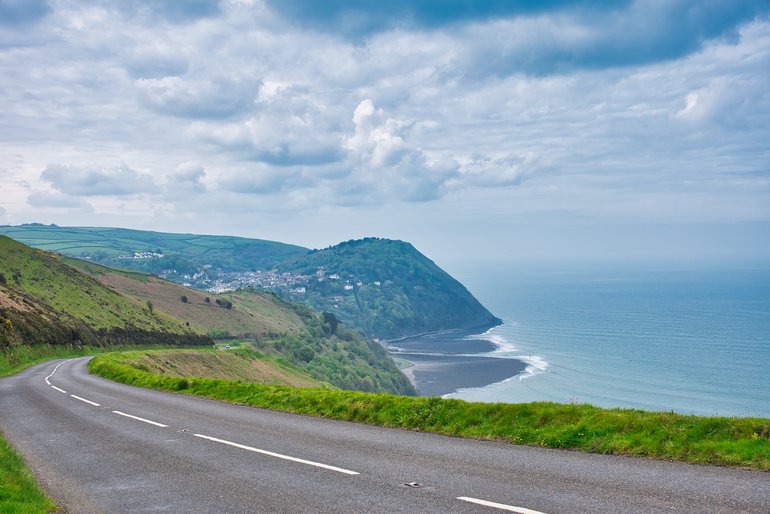 One of the steep roads in the area leading into Lynmouth

Lynmouth is a delightful little village with many attractions, waterfront walks and shops to enjoy lunch or a cream tea.

The quaint little shops of the village of Lynmouth

You can walk along the waterfront and along the river. The bridge shows one of the many cascades coming down from the gorge. 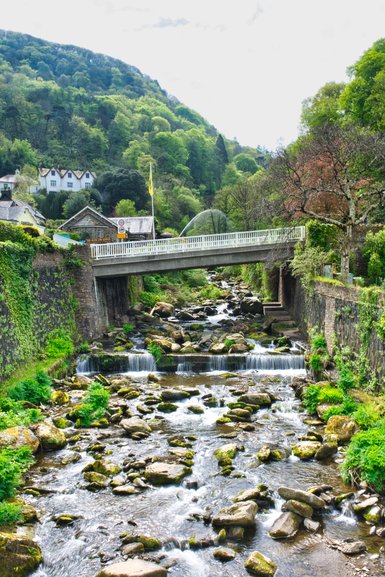 You can park your car on the street for free for two hours in Lynmouth or there is a car park in Lynton on the cliff-top. Get in early as it's a popular place to visit and fills up quickly especially in summer.

This attraction is not only a great nature area but educational as well. The information centre gives old newspaper clippings on the 1952 flood, the damage it did and markers on how high the water got.

It also educates on climate change, water conservation and how water has been used for power in this area for over 100 years. You can also see and read about the famous 1899 Overland Launch of the rescue lifeboat.

You can then walk through the woods and beside the river to see the many falls and cascades in this area. There is also accessible paths for wheelchairs and prams with step free access. 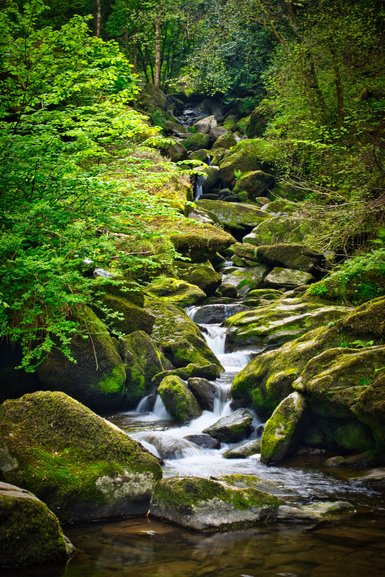 One of the many cascades flowing down the river

There are many waterfalls to see and the loop walk only takes about an hour. It has a few steps, steep in parts and muddy but it's a beautiful walk with only the sounds of the river and birdsong. 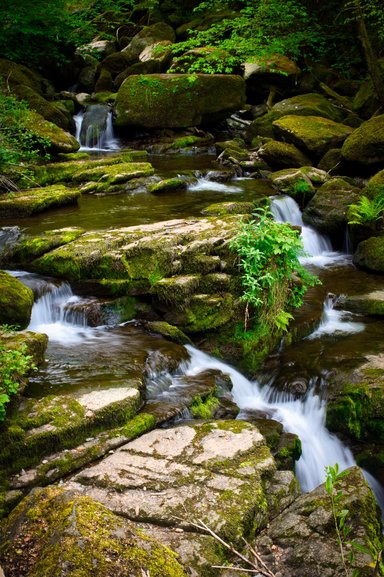 Great views of waterfalls along the track

Take the Funicular up to the cafe, 500ft above the Esplanade. This is the highest and steepest, water powered railway in the world. There is an open verandah on the front where you can test your fear of heights as you ride up and/or down. 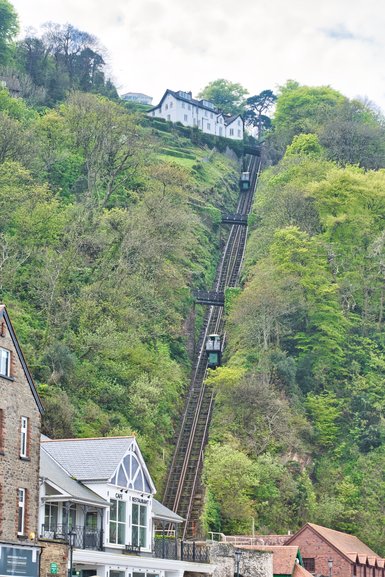 The Cliff Railway going up and down the cliff-face

At the top of the funicular, you're in Lynton. It's here that you can visit the Lyn and Exmoor Museum, a small but interesting museum to visit giving an insight into the history of the area, who lived there and how.

Just outside the National Park, Exmoor Zoo is easy to get to and has a large enough car park for this small but compact zoo.

I am so glad that I visited this zoo as it's the best I have ever visited. It has animals that not only have I never seen before, but I have also never heard of.

Black Leopards call this zoo home, two of only three in captivity in the UK. This area also has the myth known as the Exmoor Beast, a large black cat that roams the hills of Exmoor. It's not the only place in the world that has this myth, but you can see these magnificent creatures at the zoo if you're not lucky enough to spot one on your travels. 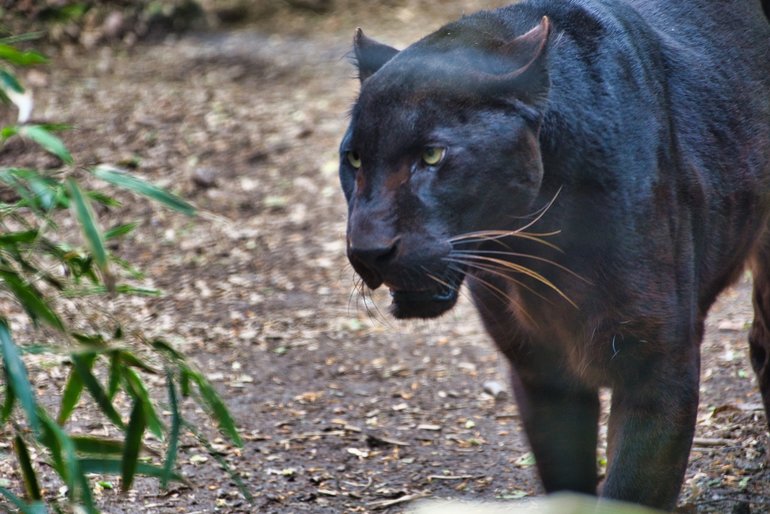 The Black Leopard also known as the Exmoor Beast

I visited a couple of hours before closing and it was a cool, overcast day. The animals were very active especially the Pumas which were walking all around their enclosure including up on the platforms. 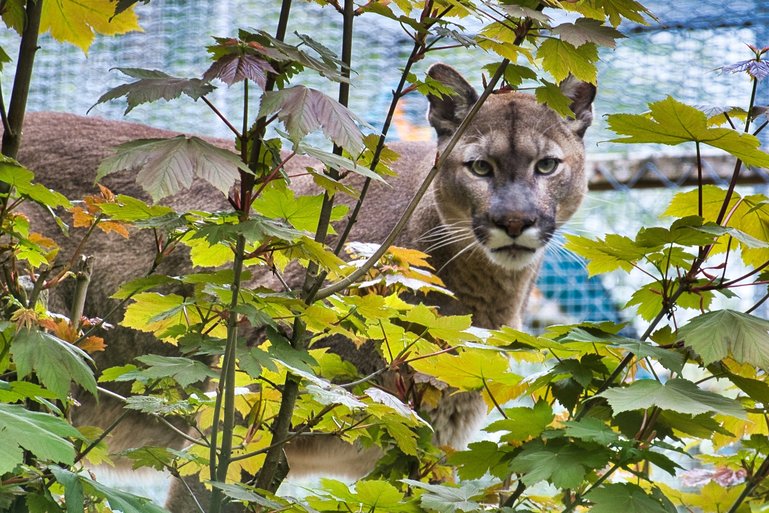 The Puma up on the platform amongst the foliage

Maned Wolf amongst the bush

It took me less than two hours to go around but I did arrive at 3.00pm and wanted to see everything before it closed at 5.00pm, so didn't take my time.

It's a great alternative to a big zoo, with kids able to not only see animals they have never seen before but learn about them in the talks.

It's well worth the visit and can't recommend it highly enough.

With a carpark in the village or at the castle, it's easy to get around although very steep in parts. 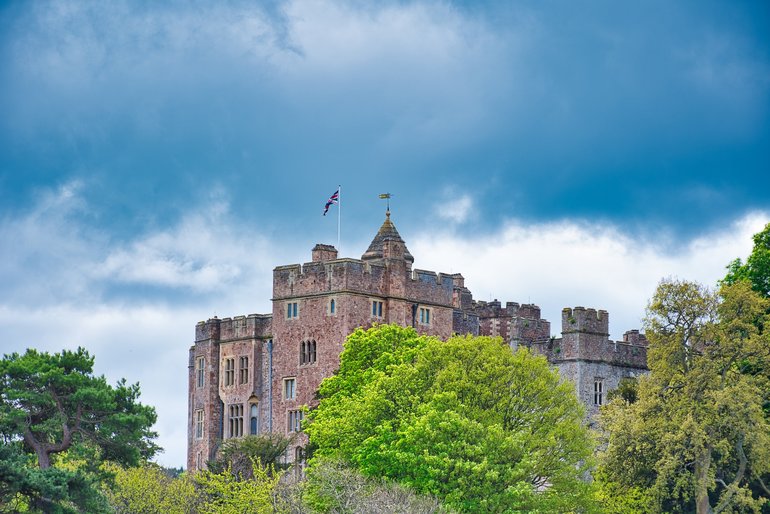 Dunster Castle from the Village

The gardens of Dunster Castle are nice to walk around. They have a working watermill from the 18th Century, (unfortunately being serviced when I was there) and two floors in the mill with industrial implements from the time.

The castle itself has been there for over 1000 years in one form or another. Once a Saxon stronghold it was made into a comfortable Victorian country house by the Luttrell family during the 600 years of it being in their family. 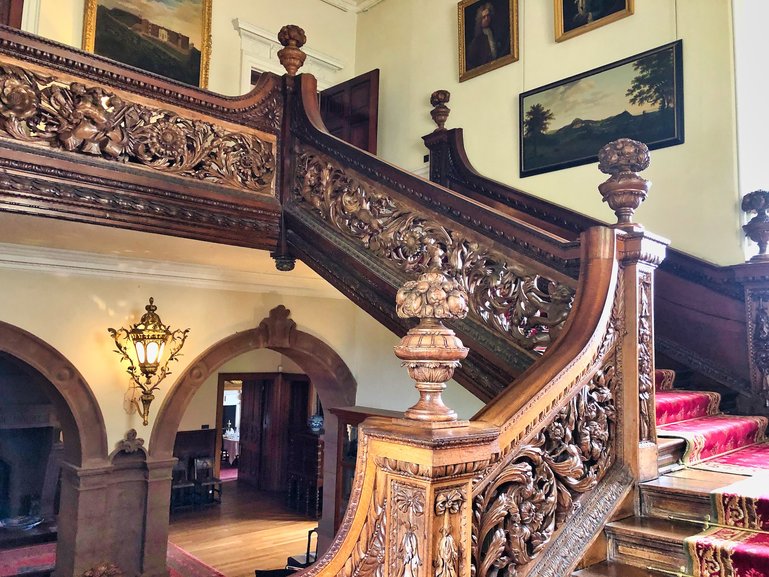 Inside the rooms are tastefully decorated including the story of Antony and Cleopatra in the rare 17th Century leather hangings. There is also the large piece of masonry over the mantle, of the bedroom used by Prince Charles, later to become Charles the 2nd, of the Judgement of Paris, dating from 1620. 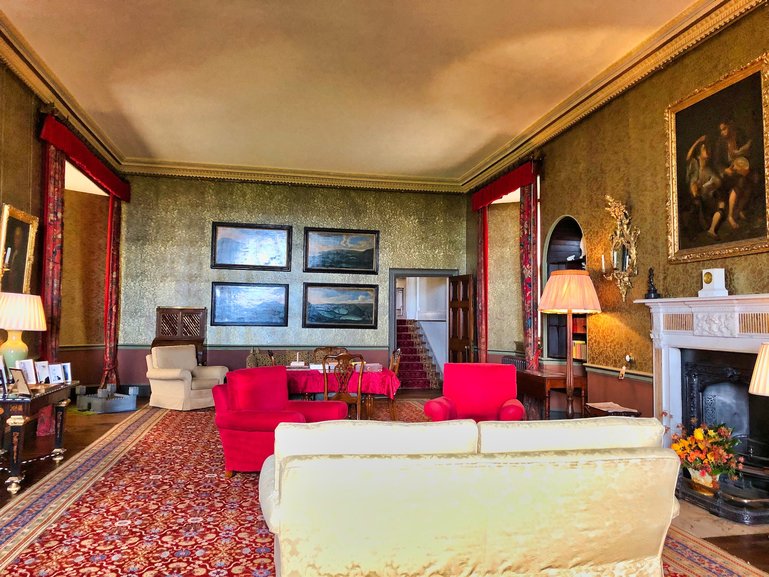 The living room looking more like a family home

The village of Dunster is so charming, with shops and cafes and an old Yarn Market, just to the side on the main street. It also has the Priory Church of St. George, which dates back to the 15th Century. 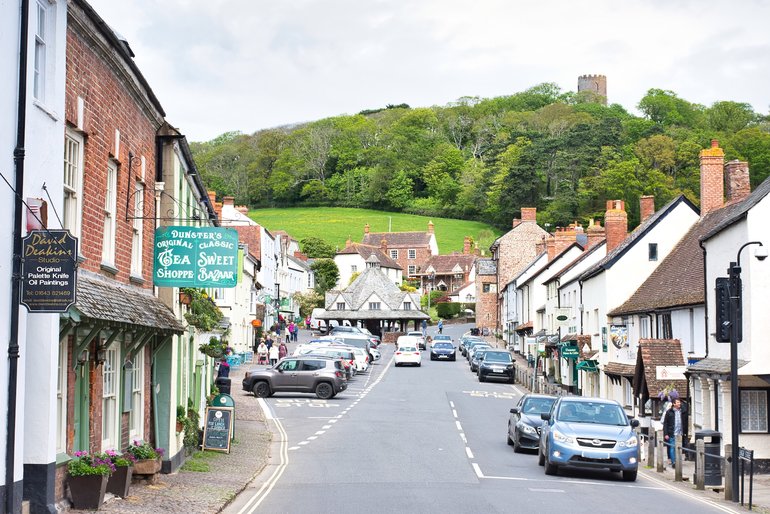 You should plan your day well, as in summer this village and castle is a very busy for a very good reason.

Exmoor National Park and all its surrounds is a great area to spend a week. Whether you're into hiking or just taking in the views, it's nice to just get away from the crowds and breathe fresh air.

A weekend in the New Forest National Park 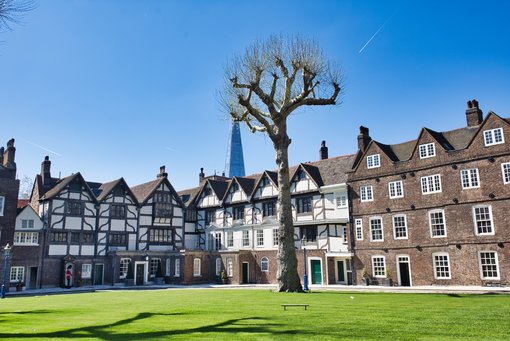 A full immersion in the main archaeological and landscape sites of the Neapolitan reality. The journey opens extraordinarily with the first stop at the Ruins of Pompeii, then changes shape, imbued with the smell of the lemons of the splendid Sorrento peninsula to lastly enjoy colorful little houses overlooking the sea of the Amalfi Coast.