For anyone interested in ancient history and culture, a visit to the country that houses some of the oldest, most notable examples of human civilization and engineering – which we still cannot fathom today – is a must and will no doubt bring out the adventurer in you.

Some visitors are satisfied with a tour of the Pyramids of Giza and the Great Sphinx, but there is so much more to this alluring destination. From the Red Pyramid at Dahshur to the unique villages in Nubia you will be awe-inspired. I have selected 11 of the best things to do and see in Egypt. 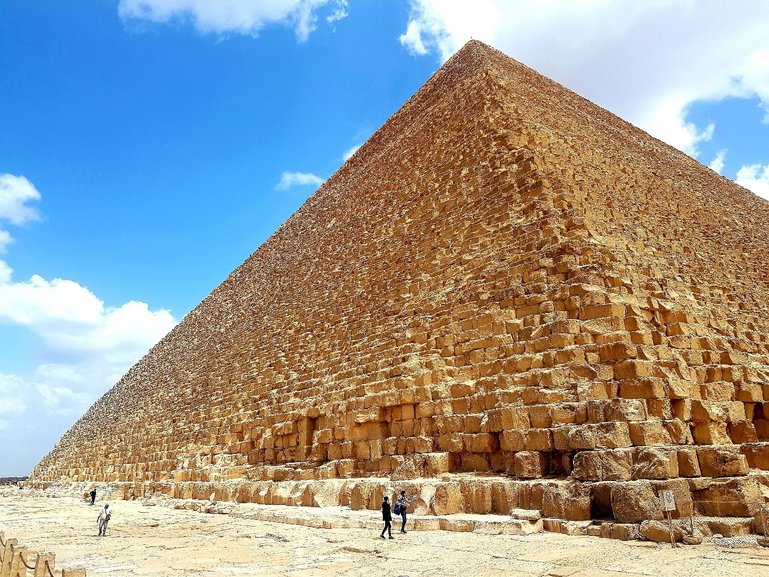 The oldest of the Seven Wonders of the Ancient World and the only one to stand the test of time, the Great Pyramid at Giza is possibly Egypt's if not the world's most famous landmark. It took approximately 2.3 million blocks of stone to create this masterpiece of engineering which were accurate within 1/100th of an inch and stood nearly 50 stories high upon completion.

As humbling as this monumental structure is today, it was once even more striking. The original casing stones were made of highly polished Tura limestone which gleamed white in the sunlight reflecting the sun's rays. Many of them were cut loose and used to build various houses and mosques in Cairo with the rest of the stones being worn away or loosened by earthquakes, but the material can still be found in the inner passages. 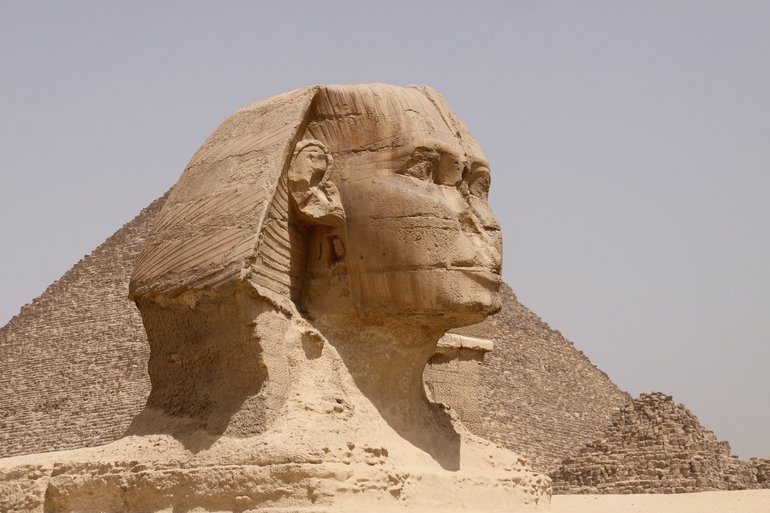 2. The Great Sphinx of Giza

This mythical creature featuring a lion's body and a human head decorated with a royal headdress is a spiritual guardian, often included in tomb and temple complexes to protect the tombs.

There are countless sphinxes, but the one at Giza is the earliest, most celebrated and largest, measuring 240 feet (73 meters) long and 66 feet (20 meters) high. The Sphinx has spent the majority of its life submerged beneath the desert, being buried up to its shoulders until finally fully excavated from its sandy tomb in the late 1930s. 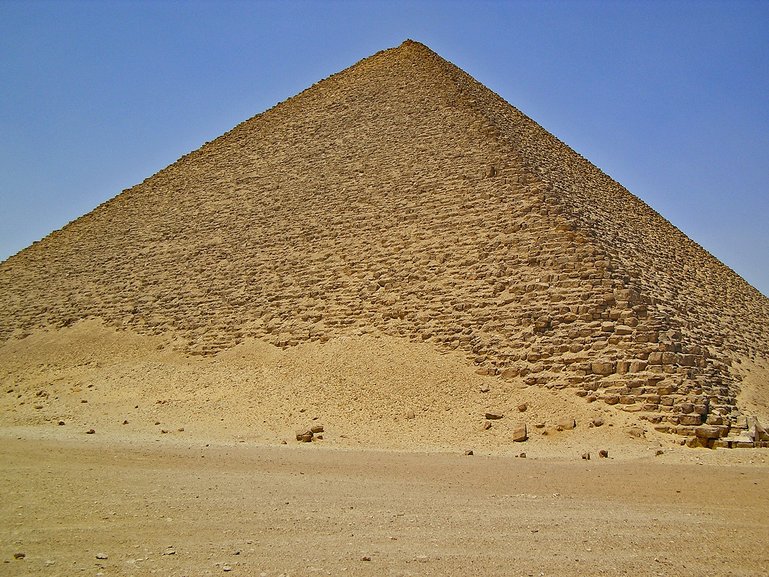 Attaining its name from its reddish limestone, the Red Pyramid, also known as the North Pyramid, marks the successful transition between ancient step pyramids and smooth-sided pyramids.

At the time of its completion, the Red Pyramid was the tallest man-made structure in the world. It is the third-largest pyramid in Egypt after Khufu and Khafre at Giza.

Located approximately 25 miles south of Cairo, it is a monument often overlooked, but if you are really interested in Egyptology, or just want a break from the influx of tourists, it is worth a visit. The pyramid is fully accessible and an impressive reminder of the early architecture of the Egyptians. 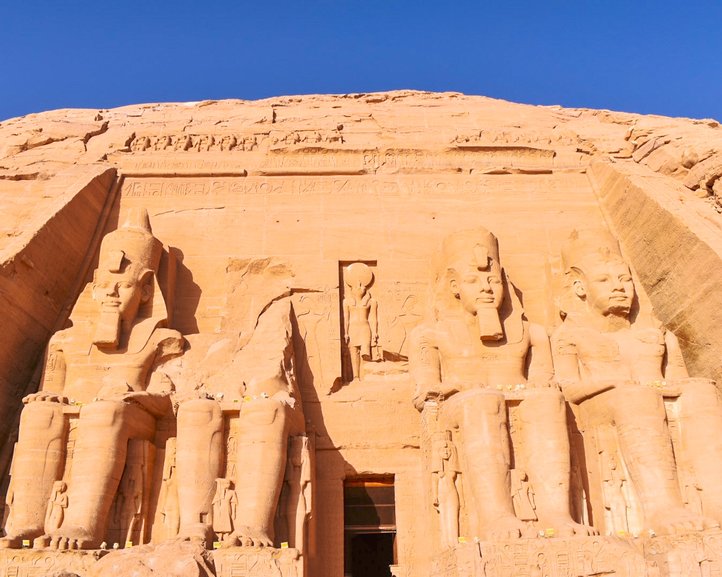 This significant Nubian monument just 25 miles from the Sudan border is worth the trek. It is a site of two ancient temples built by Ramses II, cut into a mountainside of sandstone overlooking Lake Nasser.

The larger of the two temples contains four gargantuan statues of a seated pharaoh Ramses II at its entrance. The temples are adorned floor-to-ceiling with the most glorious hieroglyphics, taking you back to times of war and unity between Egypt and Nubia. It will take a lot of time out of your day but will be highly rewarding. 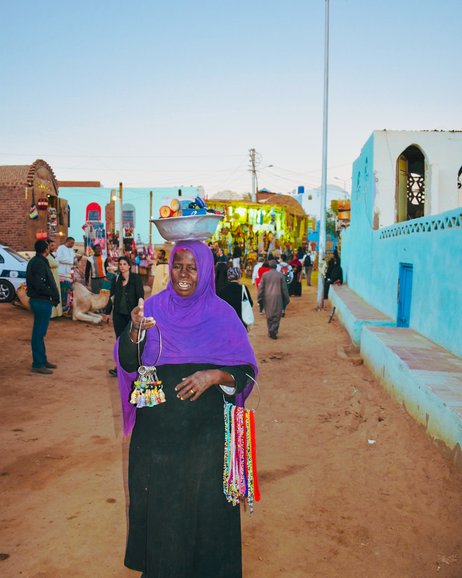 The history of Nubia can be traced back to 2000BC. Aswan is surrounded by 60 Nubian villages on the West Bank, be sure to visit at least one of them. The Nubian Villages are inhabited by indigenous Nubian people, who are known for their customs, traditions, beliefs, architecture and history. From Aswan, you can get to the Nubian Village by car or boat.

Amble through the village absorbing the vibrant hues and stroll through the bazaar, where local villagers will invite you in for tea and trade handmade Nubian crafts.

Crocodiles represent an important physical totem of blessings in Nubian belief and to this day, some Nubians keep crocodiles as pets and maintain a tradition of crocodile taxidermy. Take in the unique colourful culture of one of Africa's oldest empires. The people are beautifully warm and will offer a rare perspective on your Egypt trip. 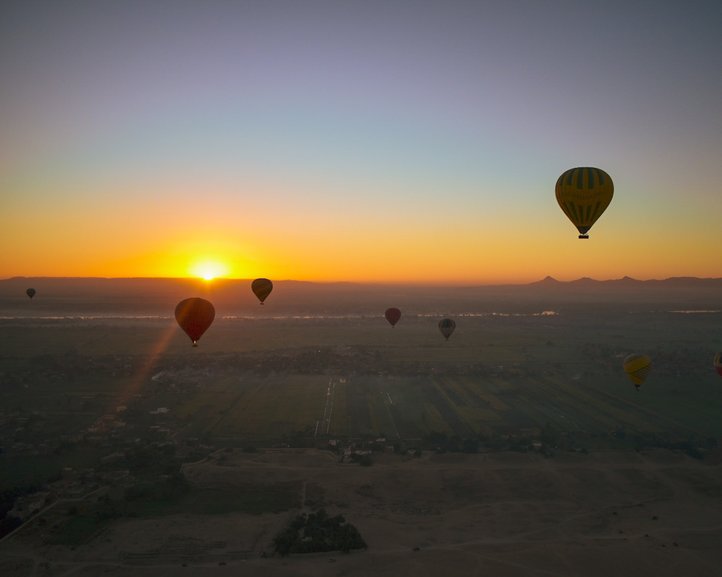 6. Hot air balloon over the Valley of the Kings

Up, up and away. If you have never ridden in a hot air balloon before, what better way to do it than floating over the Valley of the Kings and other ancient relics. Watch the Sun God, Ra rise while absorbing an aerial view of the sites of ancient tombs and temples from high above the desert which appears as golden as the sun.

You will be collected at 04.00am from your hotel and taken to the Nile River where you will be transported by motorboat to the West Bank of the river to start your balloon ride. You will be in the heavens for approximately 45 minutes and it can get a bit chilly but you will not only be high up in the air but also so high in spirits that you will be on cloud nine. You will also receive a flight certificate and souvenir at the end of your tour. 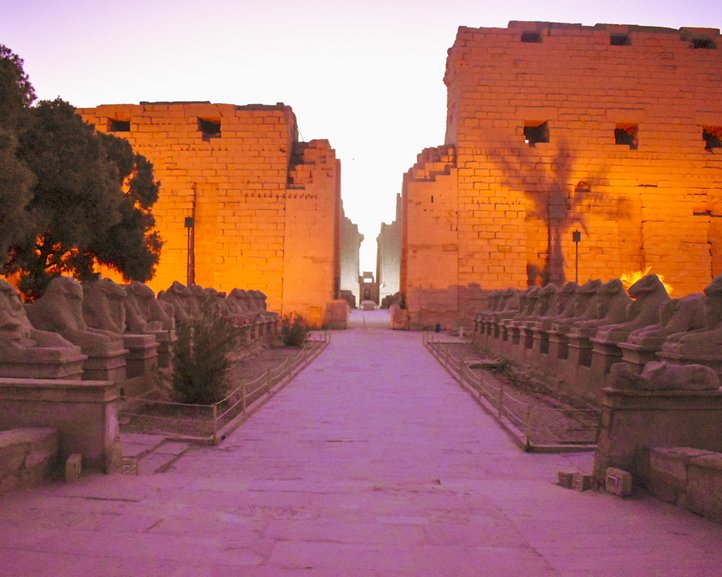 Visit the complex that was the heart of Egypt during the New Kingdom. This vast open site, located in Luxor consists of a group of temples and is one of the world's largest religious complexes.

The Hypostyle hall, at 54,000 square feet (16,459 meters) and featuring 134 enormous columns, is still believed to be the largest room of any religious building in the world.

The Sacred Lake which forms part of the complex is the largest of its kind and was dug by Tuthmosis III (1473-1458 BCE). It was used by priests for purification and other rituals. Karnak Temple is believed to be the second most visited historical site in Egypt after the Pyramids at Giza. 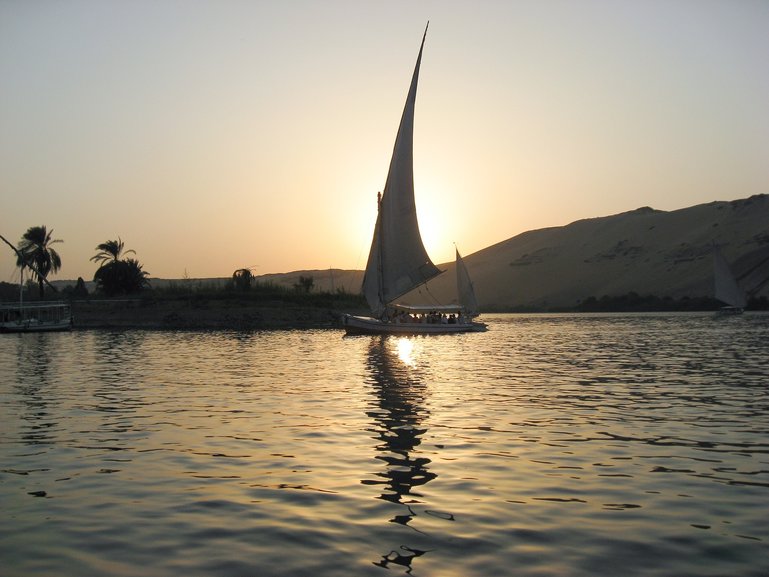 8. Felucca on the Nile

Glide along the world's longest river in a felucca. Feluccas are simple, traditional Egyptian sailboats that have adorned the timeless river since ancient times. They rarely have any form of engine and rely entirely on the breeze that pushes them upriver, while allowing them to return on its current downstream.

It's the perfect way to relax after a busy day touring. Cruise the tranquil waters as in the time of the Pharaohs whilst drinking Egyptian tea and soaking up the superb views. 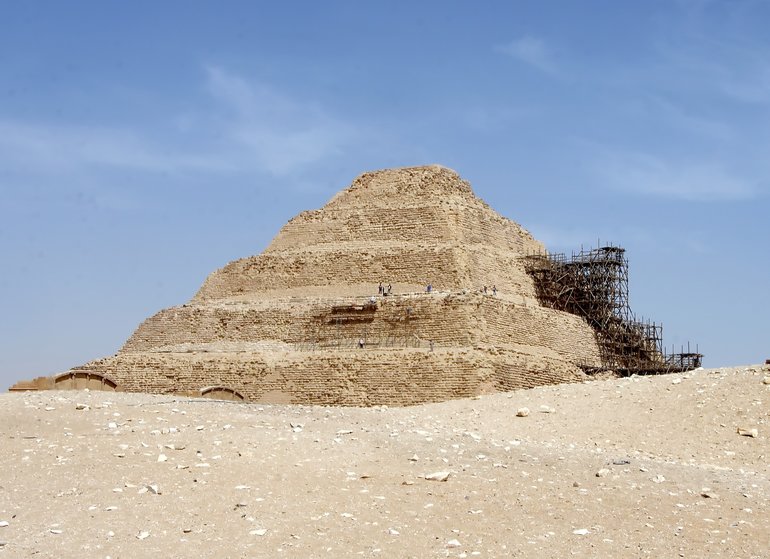 This extensive archaeological site was a necropolis for the ancient Egyptian capital of Memphis and is based approximately 20 miles south of Cairo. The most famous structure here is the Step Pyramid which is a magnificent reminder of the early construction of the Old Kingdom.

Constructed at Saqqara about 4,700 years ago, the Step Pyramid, also known as The Pyramid of Djoser, is considered to be the oldest pyramid in Egypt. 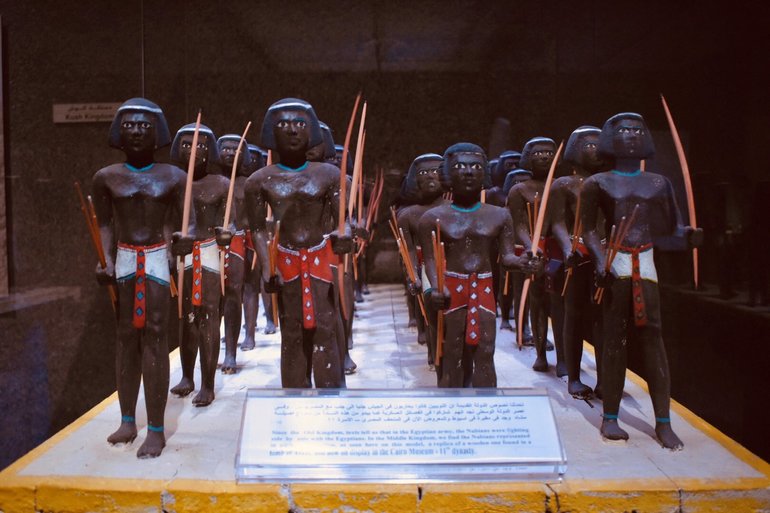 Trace Nubia's history with exhibits running from 6,500 years ago to the present day, from the Kingdom of Kush to contemporary folk culture.

Established in association with UNESCO in 1997 the museum houses antiquities salvaged during the construction of the Aswan High Dam in the 1960s. The museum is a gateway to the history of Nubia and serves as a focal point for Nubian memoir and culture. 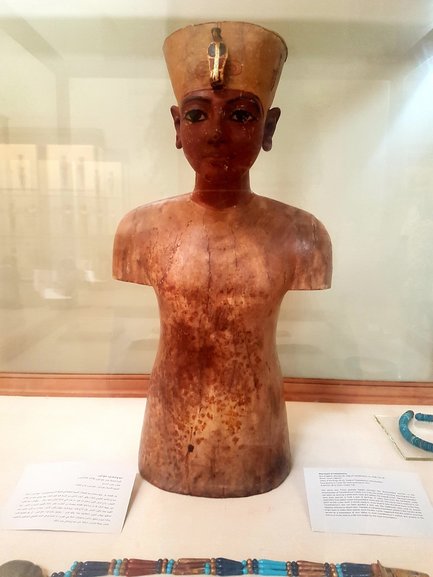 11. The Museum of Egyptian Antiquities

The gallery known commonly as the Egyptian Museum or Museum of Cairo houses the world's largest collection of ancient Egyptian artefacts.

The Grand Egyptian Museum (GEM), which will be the largest archaeological museum in the world is due to open towards the end of this year.

The new location, on the Giza plateau, looks out at the famous pyramids and adds even more atmosphere. When it finally opens, Cairo's Grand Egyptian Museum will be the largest museum dedicated to a single civilization. Beware as the mummy room is sure to give you sleepless nights. 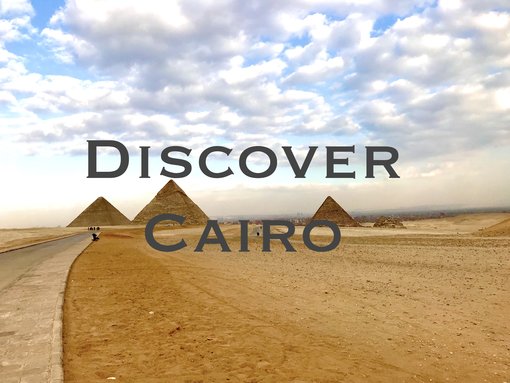 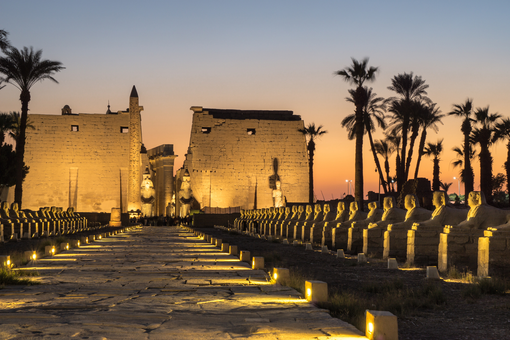