If you are ever in Singapore and the heat and bustle of the city threatens to overwhelm you - rest assured, you have the perfect day getaway only a short stop away. A mere 3 SGD will get you a seat on a bumboat, and whisk you back in time to the island of Pulau Ubin. There is no fixed schedule for the boats which depart from Changi Point Ferry Terminal (to the island, or on the return trip), as they only leave the jetty once they have 12 passengers onboard. (Amazingly nobody gets stressed out about this). The terminal itself is cool and has well stocked vending machines as well as immaculately clean bathrooms. Although there are basic shops on Pulau Ubin I would recommend that you buy a bottle of water at the terminal just to be on the safe side. 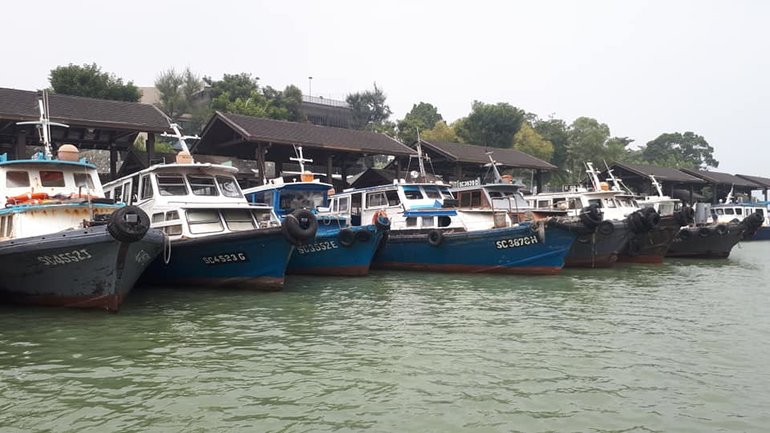 The bumboats are an experience all of their own. Held in place at the jetty by only a back thrust of the engine (no ropes) the simple act of getting on and off can result in an adrenaline rush and I would definitely recommend sturdy shoes with a confident grip. Seating on the boats is rudimentary - some of them offering weather-beaten plastic garden chairs tied to the deck for an open air alternative to the plastic covered benches in the cabin. However they remain the quickest and cheapest way to taxi between mainland Singapore and the islands and they add a unique flavour to the trip. 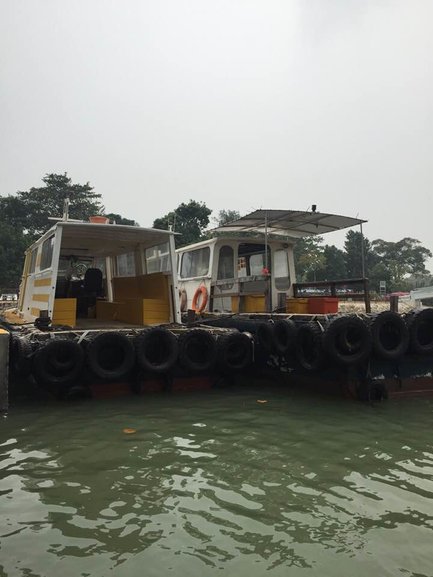 Lying 15 minutes northeast of mainland Singapore Pulau Ubin has a population of 38, living in traditional kampongs (villages) – and you won’t find any of the city hustle here, nor ATM's - so be sure to bring cash. The area immediately off the dock has a few bicycle rental outlets and restaurants which would not have been out of place in 1960. Unrushed and unsophisticated – yet absolutely perfect. The people are friendly and totally defy any sense of urgency - indeed, you are on holiday - so embrace the pace.

A 10 minutes walk further into the island and suddenly the tranquility is unsurpassed and you’re surrounded by dense forests and an abundance of wildlife. Monkey chatter and birdsong complement the rustling foliage and create a space where humans are the visitors. The monkeys travel through the forests and along the pathways in large troops, are extremely cheeky and will fearlessly grab any items within reach or sight. We saw monkeys using their teeth to effortlessly chew through Coke tins to access the Coke inside. Although they are generally harmless it is always best to remember that any wild animal will protect itself if it feel threatened - and they have really vicious teeth.

Wild boar herds forage along the forest floors throughout Pulau Ubin and are slightly more elusive than the monkeys, although the younger generation appear to be more adapted to human presence and will come right up to you asking for food. 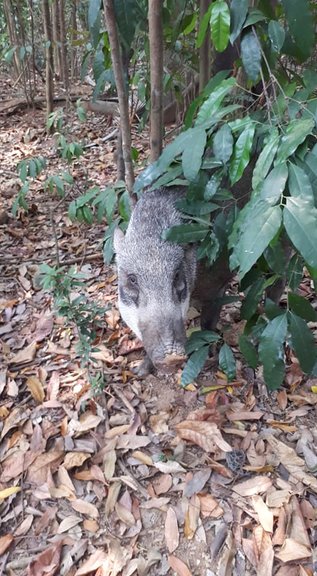 Chek Jawa Wetlands lies on the Easternmost tip of the island and an immaculate boardwalk and lookout tower makes viewing the surroundings easy – without trampling the environment. The Mangrove Forest found here is the largest of its kind in Singapore and is absolutely magical to behold. Home to Fiddler crabs, mudskippers and mud lobsters the towering mangroves swamp is majestic and breathtaking. The roots look as if they could reach anywhere they set their mind to. Growing along the edge of the island their large root system helps to break the force of the waves, and prevent erosion of the shoreline. With climate change resulting in rising water levels, and more damaging weather patterns, mangrove forests will play an ever increasingly important role to healthy ecosystems in the future.

For those looking to escape the city and do some soul searching, reflection or communicating with nature – Palau Ubin is the absolutely perfect getaway with no access fee other than the transport across to the island.

8 days / 7 nights at the Surfer Beach Camp (Weligama, Sri Lanka) situated just in front of a great beginner breaks that will get you up and ripping in no time, If you have in mind to have the perfect beach holiday and the waves breaking just meters away, this is it.

-Experience the thrill of exploring Bangkok by tuk tuk, Long Tail Boat, Sky Train … etc -Take in the beauty of Bangkok lit up at night. -Sample some of the city’s famous local food. -Visit Wat Pho and the Flower Market such as many more.