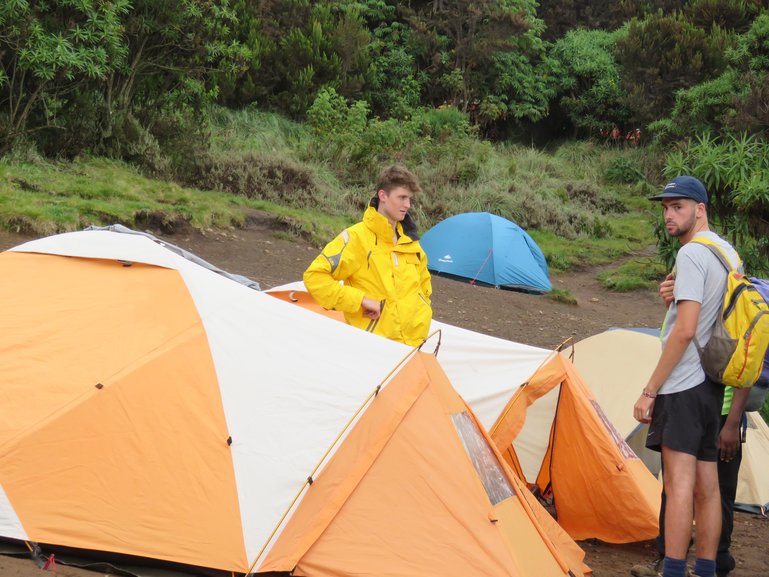 Tent Making at The Campsite via Machame Route

Climbing via Kilimanjaro Machame route, climbers will be lodging in tents to the specialized camping sites. Depending of the number of Climbing days via the popular Machame route that ranges from 6 to 8 days, the camping sites that you will be lodging are Machame camp, Shira camp, Barranco, Karanga Valley, Barafu for ascending and Millennium or Mweka camp on descending. Here are the descriptions of the camps on Machame route.

Macahame camp is the first camping site on day one while Millennium is the last Camping site via Mweka Descending trail, the camps are of number of campsites that can accommodated hundreds of tents on a tree line in a forest. Being at these camps you will see a central ranger station and a number of brick toilets and long drop latrines. As the camp are is the forest, the air is humid and it is not too cold and because of the trees you will not see other people around the camp. The camps are of similar features because they are on the same level or distance from the mountain base.

The second camping site located on volcanic spill-off of the vast Shira plateau from the last explosion some 100,000 years ago where you will find more fragile plants among the rocks. Here there are ranger huts, latrine and brick toilets. The site is large enough to accommodate hundreds of tents and very easy to spread out and have some privacy time. As you are on a bit higher altitude it is windier and expect it to be cold than at the Machame camp. At the Shira Plateau, you will see the stunning view of the summit point “The Kibo Kilimanjaro Cone” especially at down and dust and when it is full moon in the night it is even magnificent, seeing the moon behind the summit point.

The third camping site situated at the head of the steep valley a dropdown to Umbwe route that goes down to Moshi. Tucked up underneath the summit massif you will see huge dramatic cliffs, some remains of hanging glaciers and often the whole of Kibo Kilimanjaro Cone plastered in snow while looking down the valley you will be seeing Moshi. Like the other campsite, Barranco camp has the brick toilets and latrines, a Rangers hut and can accommodate hundreds of tents, though space is limited which can takes you some minutes of walking reaching your tent, the campsite is also with lots of plant life that make the campsite green and verdant, especially the giant groundsels that grows several meters tall.

The fourth ascending camp which is very open and located nearby the slope and this need to take attention of making sure that your tent is on a flat piece of ground. From here you can easily see the route to the summit with other great view of the summit massif while looking down you will see the light of Moshi. As the rest of the camp, it has the Brick toilets and pit latrines, a Rangers Hut and space for at least a hundred tents. As you're at high, here it can be windy and cold with the cloud coming very fast. However, Karanga camp have water challenge as there are no nearby stream which forces the porters to walk for about 40mins down the trail fetching water to the nearby stream. For the 6 dasy climber do not cam at Karanga hiking direct to Barafu from Baranco bu a stop to Karanga is a worth stop for acclimatization.

Barafu is the Swahili word meaning ‘ice', hence literally it is an Ice camp, the is the last ascending camp before the summit at 6400 meters. The camp used to be covered by permanent snow snow, but this is no longer happening but still it is very cold and rocky as it is higher and exposed. It is here where you will feel the altitude and expect some snow and often wind. The campsites are dotted among nooks and crannies in the rocks, running the length of the ridge. Some camps are far below the Rangers hut and the start of the summit climb, so it can add more than half an hour to the ascent. The campsite is with the brick toilets and latrines, the facilities are now good but water is in short supply so the porters are forced to travel back downhill to the nearest stream. At Barafu, rangers possess the heavy-duty stretchers with singe wheel at hand to take people down quickly in case of any emergency situation, at Barafu campsite, there is a helipad also.

Hi, we are Machame Route, from Kilimanjaro Tanzania and we will take you to the Highest African roof via the Popular Machame ascending Route

The seven day Machame variation is the ideal schedule for this route. On the 7 day Machame route, the trek from Barranco to Barafu is broken up into two days, allowing for a short day just prior to the summit attempt.

Machame Route Kilimanjaro climbing, also known as “Whiskey” route which means challenging route. Climb Kilimanjaro 6 day, Machame the best route. It is the second most popular and one of the most scenic routes on the mountain. Also the tour will take you to Lake Manyara and Ngorongoro Crater.