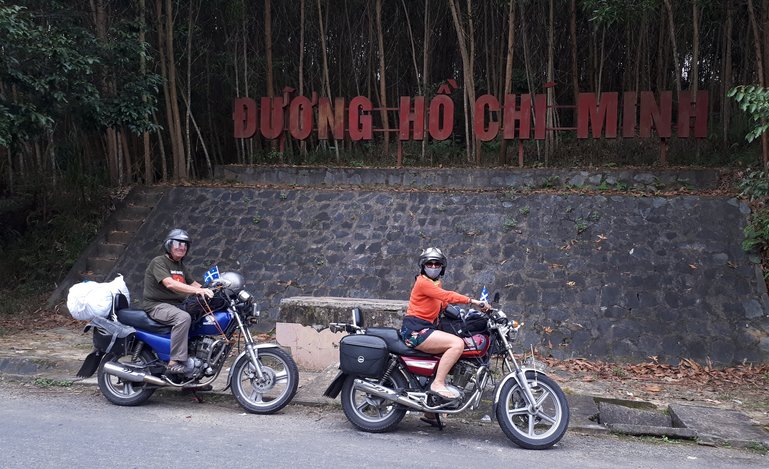 Our introduction to Easy Rider motorcycle tours began in Danang, Vietnam with a simple half-day trip from our hotel to Marble Mountain to see the sights. But this was just the beginning of what would turn out to be the best experience of our 5 month trip to S. E. Asia.

My partner, Marie loves to travel by motorcycle, so when we asked the hotel desk how to get to Marble Mountain and they suggested going by motorcycle, she was all for it. Riding pillion on a motorcycle affords you the freedom to enjoy the ride without having to worry about the road or traffic. Instead, you savor the cool breeze, see all the sights, and enjoy the smells that waft around you. Marble Mountain itself was interesting but not riveting. After one month in Vietnam, we had seen plenty of temples and statues of Buddha. When we rejoined our driver/guides for the ride back they showed us other possible trips with them all over Vietnam. They were excellent salesmen. They could give lessons to some timeshare salespeople I know. The clincher was that you could design your trip.

We were leaving Danang the next day to go to Hoi An. They agreed to pick us up two days later at our hotel in Hoi An and escort us on a two day overnight trip into the mountains of central Vietnam along the HO Chi Minh trail visiting ethnic villages along the way. The price we agreed on included guided transportation, hotel, some meals, entrance fees, and water on the ride. It was only slightly more than what we would have spent staying in Hoi An for the same time. What followed was the most fascinating experience of our journey.

Riding through the Thu Bon river Delta we rode next to rice paddies where water buffalos tilled the fields. Arriving at My Son (pronounced me san) we were able to visit Cham ruins built between the 4th and 14th centuries by the kings of Champa, a Hindu people who worshiped Vishnu.

Along the way, we savored the strong rice wine of the region, visited a cottage industry making brooms from palm fronds, and met a woman weaving table cloths which took her over two months to finish and she sold for the equivalent of $75us. This is backbreaking poverty and industriousness unseen in North America. 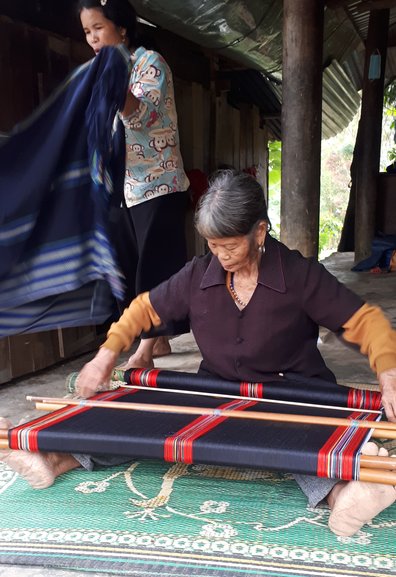 Once we crossed the Thu Bon River, we quickly began to gain altitude 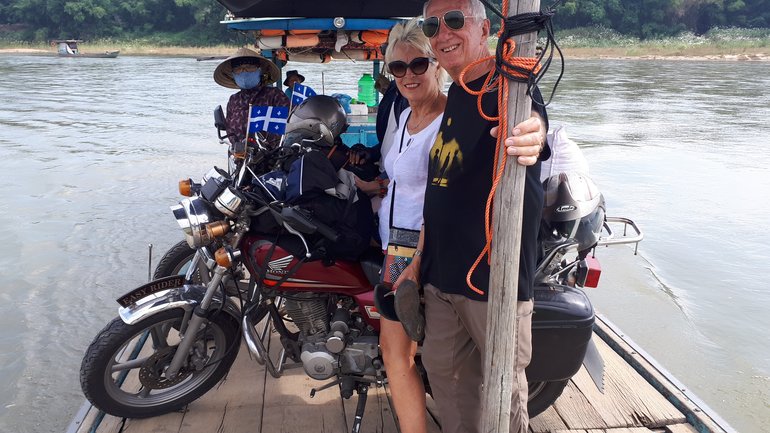 With increased altitude came cooler weather and the tropical jungle vegetation gave way to tea and coffee plantations and more forest-like vegetation and waterfalls.
In the picture below Marie is picking her way through a tea plantation. I tease her that she looks like Julie Andrews singing "The hills are alive with the sound of music"! 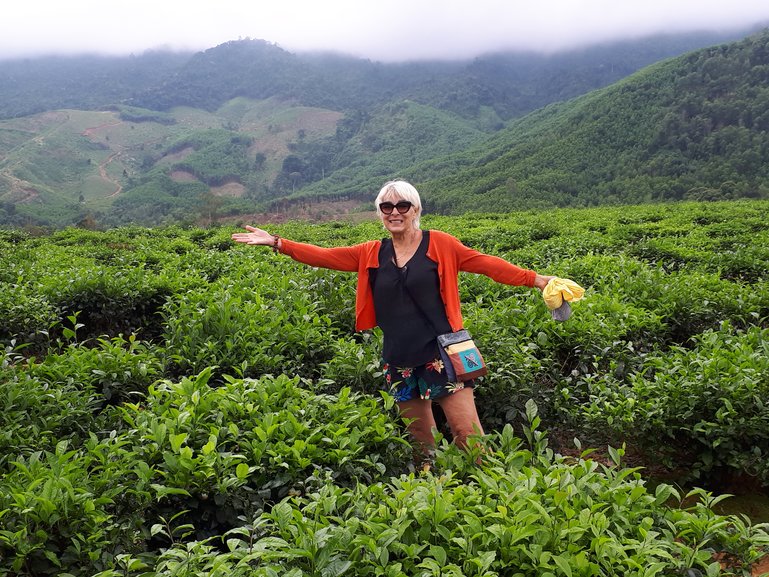 Marie in the tea fields

Our guide/drivers, Chinh and Bom, took us to places and we saw things that would have been impossible for us on our own. As we approached another ethnic village I learned what the mysterious bag strapped on the back of my motorcycle was all about.

Since they make these trips frequently, they have made friends and contacts along the way which enriched our experience. Arriving at the village we were soon surrounded by throngs of children greeting them in the language of their hill tribe. Chinh and Bom unloaded the packs from the backs of our cycles to distribute used clothing to the children and their families. Everyone was happy to see them and these strange foreigners that came along.

Our next stop proved to be the most interesting. Bom and Chinh have made some good friends among the hill tribes and next was a Katu village. We were privileged to meet the Chief and pass most of an hour with him and his family. By trade, he was a coffin maker. He proudly showed us the coffin he had made for himself which was in ebony wood with an intricate dragon carved into the top. The entire family was fascinated with Marie and her blonde hair. We were both dressed in tribal costume for photos. Only I was allowed to wear the hat, however, since this was the symbol of a chief and only men could be chiefs.

I'm dressed as a Katu chief

From there we proceeded to the back of the house where he kept a large python in a cage. I have a primeval fear of snakes. Marie, on the other hand, thought it would be great fun to wrap the serpent around her neck which she proceeded to do much to my horror. The worst was yet to come when the Chief wanted to take a picture of the two of us with the python. Torn between what I imagined might be some sort of cultural insult to refuse and my innate fear of snakes I took a spot next to Marie briefly for the photo but, kept a sharp eye on the slithery monster. 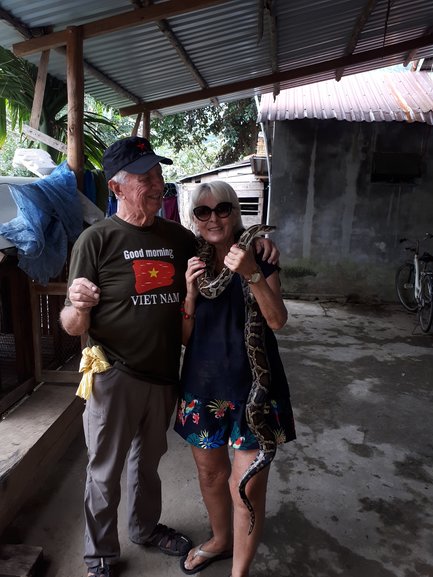 After the python incident we were invited to have tea with the Chief. The people of this tribe have facial hair but no body hair. As we sat sipping tea the Chief seemed intrigued by the hair on my arms and kept stroking my forearm to feel the hair.

We spent the night in a small family-owned hotel in a nearby village. We drank rice wine and had a tasty dinner of fried chicken with the owners of the hotel as we were the only guests. The last day we climbed mountain passes and descended serpentine roads. A few waterfalls served to cool us down from the increasing heat as we came to lower elevations. Just before Danang, we arrived at Hai Van pass. The tour paused here for the incredible view and some juice or coffee. Hai Van pass had once been a French fortification during the Indochina war and still had some of the towers. I believe the Americans used it also during the Vietnam war due to its strategic location guarding the pass.
Following our respite at Hai Van pass we motored on down towards Danang and China Beach where we encountered the almost comical Vietnamese fishing boats. These boats are intended for one or two fishermen only and are round, like a walnut shell cut in half. They remind me of the nursery rhyme about three men in a tub. 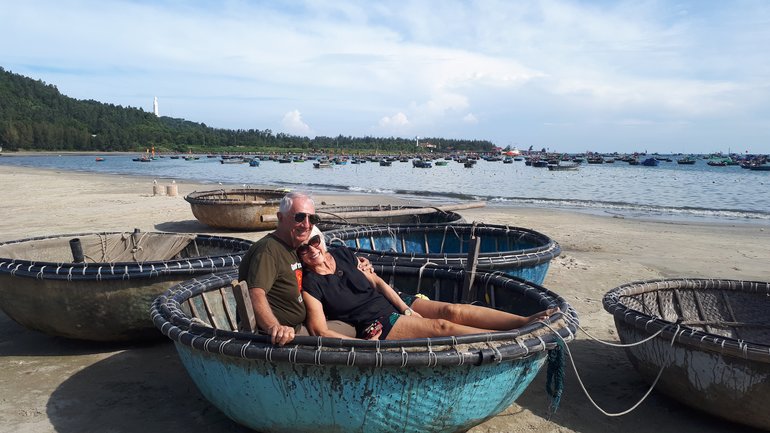 From Danang back to Hoi An is only about a 40-minute ride. Our two-day adventure with Easy Rider was coming to an end. 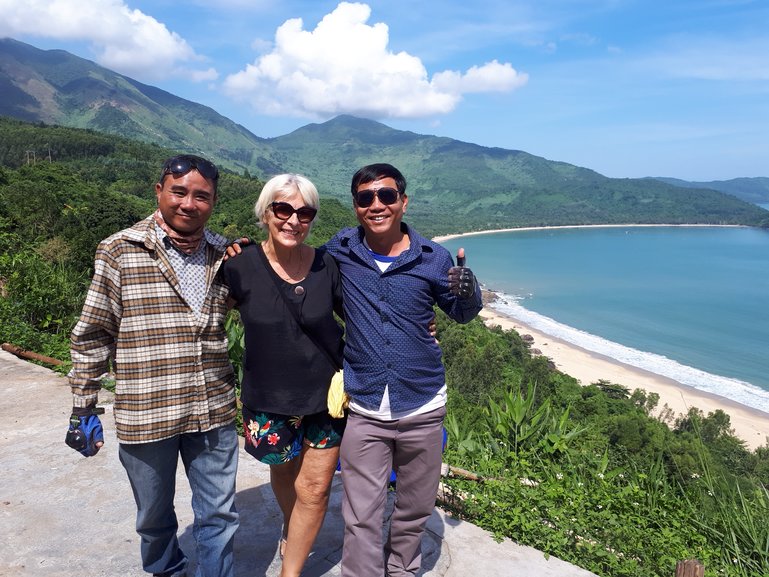 Marie with Chinh and Bom near Hai Van pass

Bom and Chinh were very professional, spoke good English, and were extremely well connected and informed about the areas we toured. I would not hesitate to recommend them and Easy Rider tours to anyone wanting an authentic and unusual, non-touristy trip through Vietnam.

I grew up in Puerto Rico and am completely bilingual in English and Spanish. I also speak French and Portuguese at an intermediate level. Except for 12 years in Colorado, I have lived most of my life in the Caribbean and Latin America. I have worked as an Export Manager for a Fortune 100 company, Stockbroker, English teacher (EFL), owned my own language school, and a small niche telephone company. I was a Peace Corps volunteer at 50 years old in Chile and, in the mid-1980s, worked briefly as a travel photographer and writer. Now at 76, I’m getting back into travel writing and blogging. You can get to know more about me and my travels throu... Read more 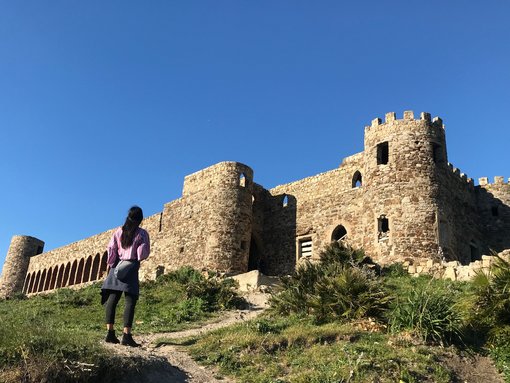 Driving in Other Countries

If you want to discover all sites of Nha Trang in a day. The best way to takes 6 hours and combine both itinerary Countryside and City Tour. Suitable for active people and want to explore the culture, meet the local people. Have a cup of coffee before end of trip will be your sweet memory on this trip.

Nha Trang Bay as know as one of the most beautiful bay in the world was recognized on August/2003 by The World Tourism Organization. The main activities are always focus for island hopping, snorkeling, diving or sea walking. Beside that, the water sports was development by many individual business to provide many interesting activities as paras