If you don't know what Earth Art, is I'm not going to try to tell you. It is well covered in plies of web pages that make very little sense, so have at it. Whatever Earth Art is, Utah is one the premier centers of it. I don‘t know how much Earth Art there is in Utah, but the three outstanding, world famous Earth Art works in Utah are 1] The Spiral Jetty, 2] The Tree of Life, and 3] the Sun Tunnels 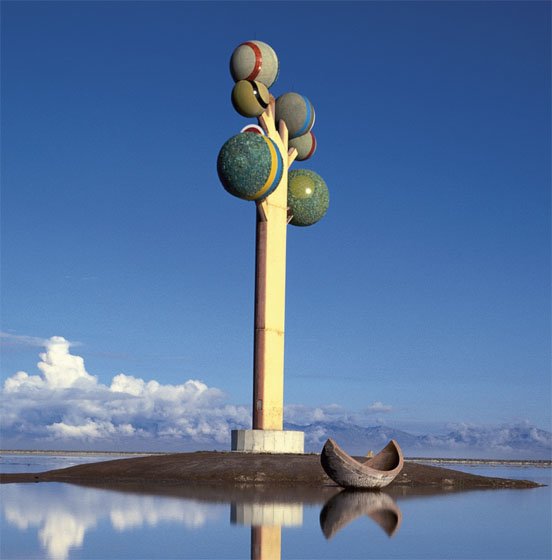 The Tree of Life

Imagine a very low man made sea wall made out of rocks. Now, instead of it being a normal straight sea wall, twist it into a spiral anchored on the shore, and there you have it. The Spiral Jetty is anchored on the shore of The Great Salt Lake and winds (or unwinds?) out into the great Salt Lake. For many unusually wet years, it was underwater, but for at least the last 20, mostly drought years, it has been above water and acquired a weird sheen of crusted salt deposited by waves breaking over the Jetty. 15 miles by a rough dirt road from the Golden Spike National Historic Monument near Ogden.

The Tree of Life

Whatever this is, its fun to see. It sits, or more properly, stands on the famous Bonneville Salt Flats, just off of I-80 about 95 miles west of Salt Lake City. Needless to say, Utah's Philistine government has never provided any decent access to this world famous work of art, at least not as of the last time we were there.

The Sun Tunnels are three big concrete pipes laying on the ground on the edge of the West Desert near where the Great Basin meets the Colorado Plateau. Each of the three Sun Tunnels is oriented to reveal a view of the landscape—Earth, seen through art—that the artist thought was worth looking at for some obscure reason. It may be that one Sun Tunnel is also oriented so that the sun rise on the Vernal Equinox shins through through the pipe. This is an allegoric cultural linkage to 1] Stonehenge, 2] a National Monument prehistoric Indian settlement in nearby New Mexico, and 3] a prehistoric Indian petroglyph on the side of a cliff along the road from I-15 to the Sun Tunnels tha is only in direct sunshine on the Vernal Equinox. 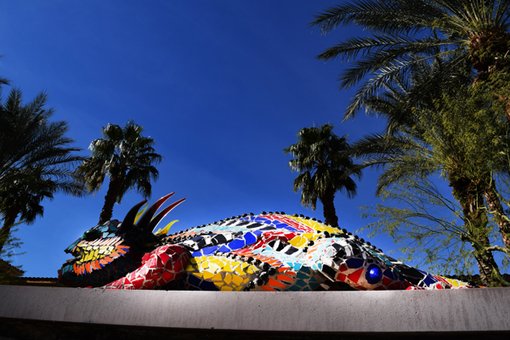 Things To Do On A Weekend Getaway To Palm Springs