The Romantic Island of Santorini

My first time in Greece was in Santorini. I know, it’s unusual, but somewhere you had to start. And it was a good start. Santorini is truly the most romantic island in the world, with its sunsets and blue domes. I loved it, and I'll try to tell you why. 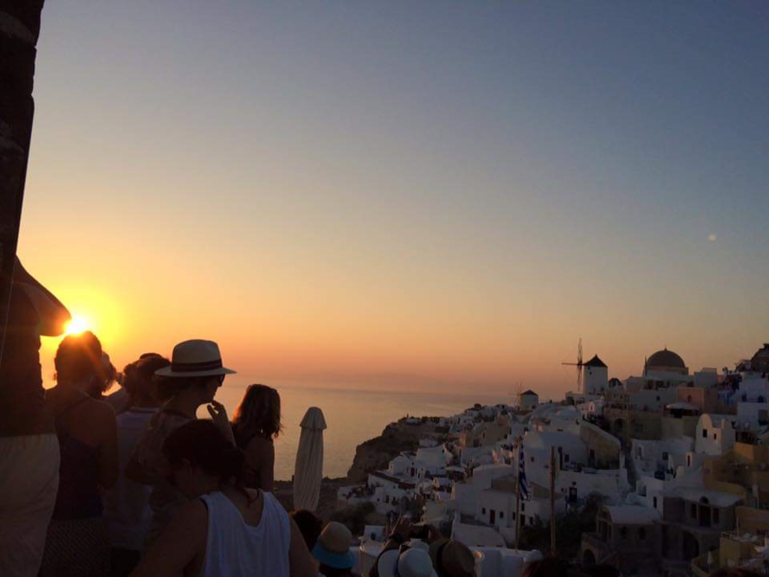 We did not organize the trip on our own, but we relied on Margo eden trips, and it was a great choice, because it was all flawless. We were guaranteed transport from the airport to the hotel and vice versa, they rented the quad bike to tour the island and offered us various hiking options. We stayed in Kamari, south of the island, place that I recommend because it is the best area to bathe. Perissa is also fine, the one, always in the south, is also good, but it is uglier than Kamari in my opinion. The north of the island, on the other hand, has the two most beautiful cities to visit, Fira and Oia, but it is not suitable for bathing because it has rocky and overhanging coast. The island is 7 km long, it is tiny, it can be visited well in a short time. I recommend renting a quad or scooter, you can park them everywhere and are comfortable to ride in the tight streets of the island, especially the quad. I think public transport is almost non-existent. 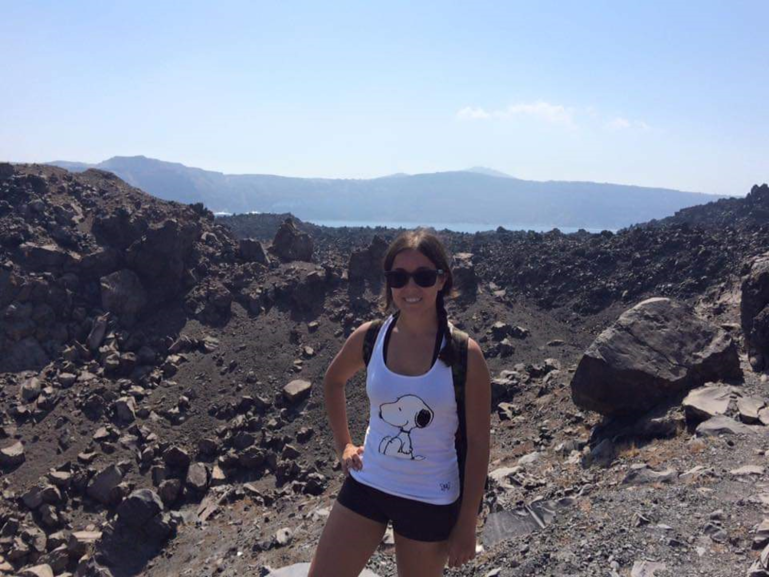 Our hotel was the Kamari Beach hotel, and it was fabulous! It's not very cheap, but it was worth it. It had a beautiful pool, it was directly on the promenade, the rooms were mini apartments in classic Greek style, all white and blue. The staff were very nice and taught us a few words of Greek. Everyone was always smiling, I love the Greeks! We had breakfast treatment, a great breakfast, really varied and yummy, on the terrace overlooking the beautiful and super blue Aegean Sea. If you wish, the hotel also had a restaurant open for lunch and dinner, we tried it once, we ate grilled squid that were the end of the world. 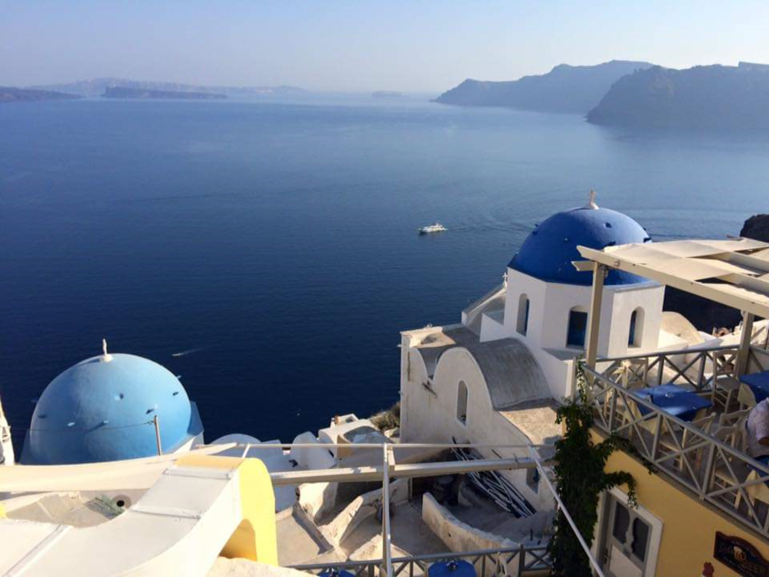 We alternated the morning a little in the pool (the aegean water is freezing and in the early morning you could not really enjoy it) and then in the early afternoon we went to the beach, we had access to the beach with private loungers especially for the hotel's customers. The only difference between Kamari and Perissa in terms of the beach: in Kamari there are small stones, which makes the water more suggestive and clean, but they are uncomfortable. I've faced some crazy struggles to get from the cot to the sea, but it's good that you don't get covered up. In Perissa, on the other hand, there is the sandy beach. As I said before, the water in Santorini is freezing. Usually, more in the morning, but also in the afternoon. The only good thing is that in August there is an absurd heat, and thanks to that we were able to get into the water, but not for long. Another negative note for me: it's very salty! The saltiest sea water ever and it's quite annoying because it's all over you....luckily, a few steps away, I had the shower and the pool..... The water is blue, a deep blue, it is very different from the Caribbean water. Santorini's water is a penetrating and menacing blue, even looking at it you understand how austere and frosty it is. 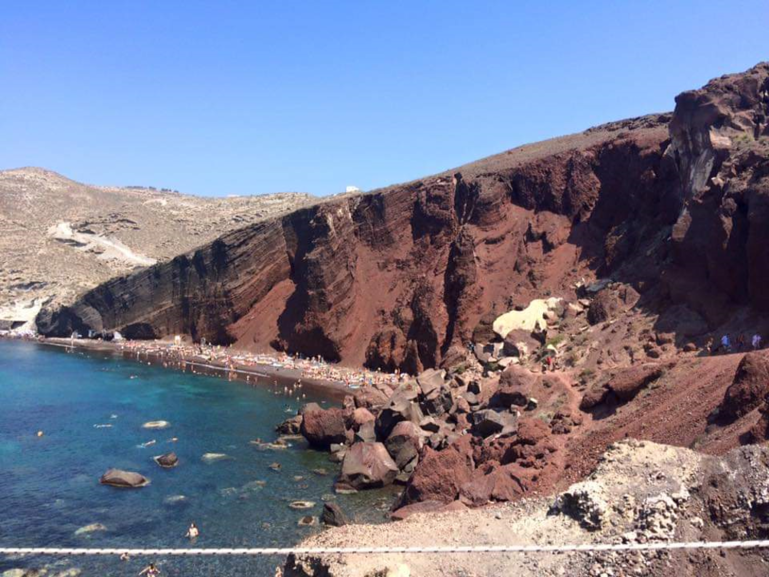 Kamari beach is divided by Perissa beach by a gigantic mountain. If you get bored at the beach, you love walking and trekking, and don't be afraid to melt in the scorching sun, you can cross this mountain by taking a long walk that will pay you back with a beautiful panorama of the sea from above. I didn't, I was too lazy but mostly hot. But we took a walk in the "high" Kamari, climbing up the cliff (in flip-flops, if I think about it I get chills), from which observed the sea from above and took unique photos.

The most beautiful and most impressive beach in Santorini is the Red beach. It's called red because it's literally red, the sand is red, the rocks are red. It is conveniently accessible by your means. We went by quad, with little difficulty even parking it, given the crowds. In the parking there is also a counter where you can have a drink and a food, recommended because then there are no more dining options. From the parking to Red Beach there is a slightly complicated road to walk, very narrow and overhanging the sea, so I recommend you to arm yourself with tennis shoes and not flip-flops, those put on them once you get to the beach. The view you see during the walk, the beach from above, is gorgeous.
Small boats depart from Red Beach to White Beach. Given the low price, we took it, but it was a disappointment, perhaps because it was not in the least comparable to the charm of the Red one. 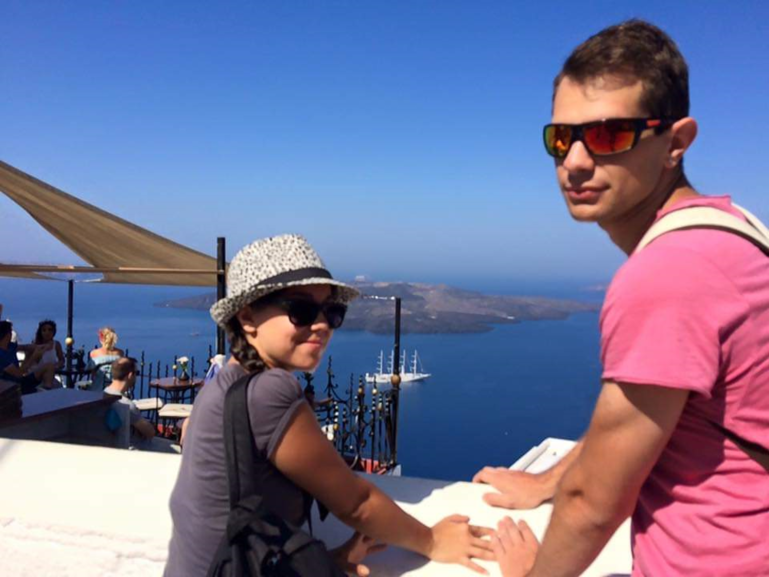 Why do I recommend staying in Kamari? First of all for the beach well swimmable, as I said. Then the evening life is not bad, there is only one street, that of the promenade, and it is full of restaurants, some very good, other tourist traps, it takes a little attention. Some are expensive, others less so. We managed to eat a delicious pita, the typical Greek "kebab" stuffed with meat, vegetables and chips, in Kamari, we went back several times. The guy who made it to us was a pain, all sweaty immersed in the heat of the stove, with 40 degrees out. What a force! Then one evening we found a good seafood restaurant, where we spent more than usual but not excessively. There is no shortage of Italian restaurants. In general, however, pita and other typical dishes such as gyros, a dish with meat, tsatsiki sauce (typical sauce with yogurt and garlic at will) and vegetables, do not cost much, while fish is more expensive. For the Movida of discos Kamari offers nothing, you have to go to Fira.

We spent half a day in the exploration of Fira, the largest city on the island. It didn't excite me, it's a bit chaotic and it just has a few noteworthy little church and building. But it's great for souvenir shopping! And being perched at the top of a mountain, because we are at the top of the island, it offers beautiful views. 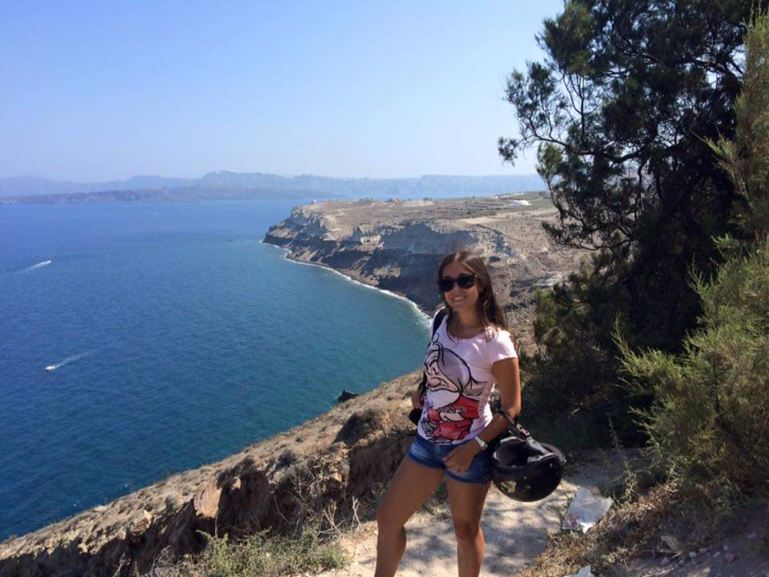 The most beautiful city of Santorini, the most famous, the so-called city of blue domes, which you see in every brochure or image associated with this island, is Oia. Here we stayed an entire afternoon and evening, to see the much lauded sunset on the domes. Oia is charming. It is also perched, also at the top, and its buildings and blue domes are unforgettable. It is also famous for mills, very beautiful. It's where the most expensive and luxurious hotels are located, with the world-famous infinity pools. But to go to the seaside life is very uncomfortable. To see the sunset there is a specific vantage point, and since it is one of the most famous sunsets in the world, people camp an hour and a half before waiting. We did it too because it seemed like a mandatory experience for those who go to Santorini, but I'm honest, if I went back I don't know if I would do it again. Roberto certainly didn't, he couldn't take it anymore! We were sitting in uncomfortable steps waiting for this phantom sunset, and it was a bit of a disappointment, but it often happens when they exaggerate to praise things. To understand us, a much more beautiful and memorable sunset I saw in Lampedusa! But we have done this too, at least we can say it. 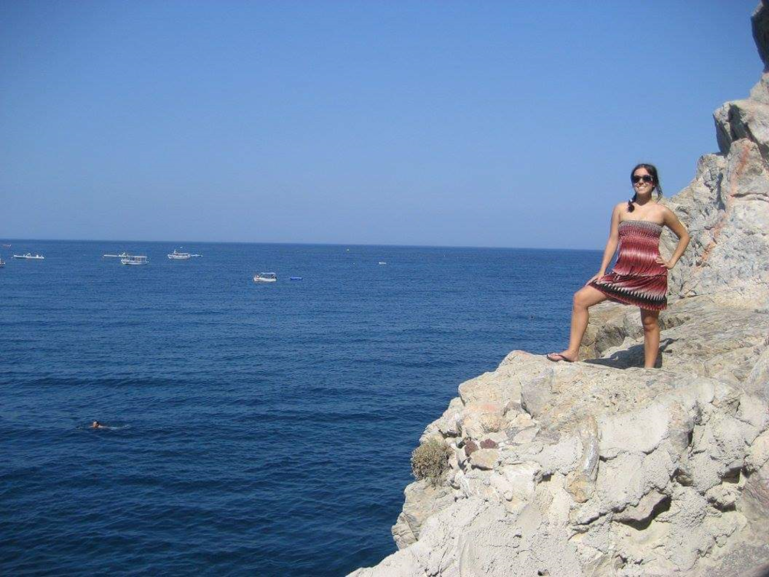 We only took one excursion with Margo eden trips, quite expensive but beautiful, to the island of Vulcano, a small island near Santorini. We reached it by boat and went up to the volcano park, basically the whole island was once a volcano and there was nothing left but ash at the top, and holes. From the pier to the top is a nice climb, there are donkeys who bring on people if one wants, but I do not like this animal exploitation and I think it is worth using them only if you have motor difficulties or handicap. The climb for healthy people is done without problems. Admission to the Volcano Park costs about 5 euros. It is evocative to walk among the craters, on a former volcano! At the end of the excursion, with the boat we stopped at a point where the sea water was thermal, full of sulfur, they advised us to put on black swimsuit because they said that the swimsuits spoil in contact with this water. I bought Fira a black costume because I didn't have any, but nothing happened, it didn't spoil or stink after the bathroom... Particular sulfur!

I mean... My trip to Santorini was perfect. I loved this island. It's a romantic island, relaxing, perfect for couples, it's not like other Greek islands designed for fun. I'm not interested in Movida but in relax and beautiful things to see, that's why it was for me. If you love romantic, peaceful and breathtaking scenery, it will definitely suit for you! 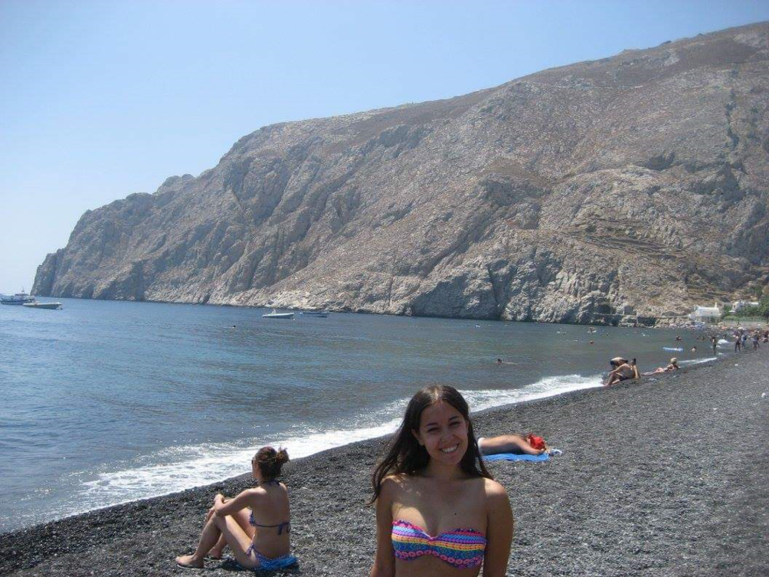 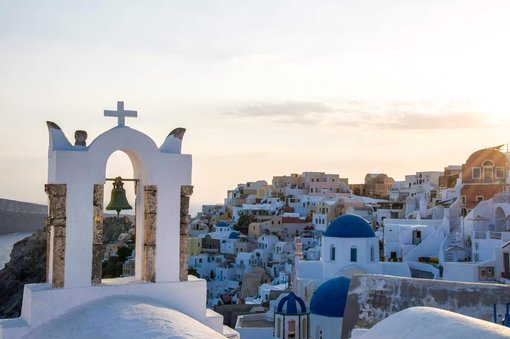 Top 10 Things to See & Do in Santorini 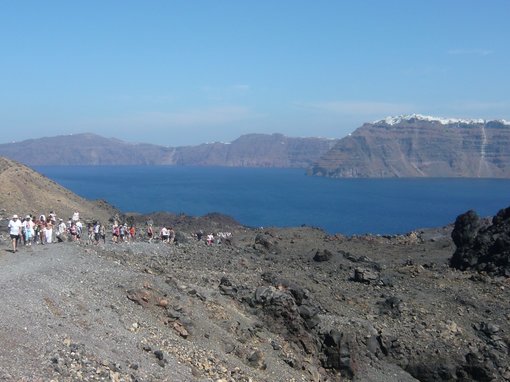 Explore, Swim and Taste Santorini and Her Islands 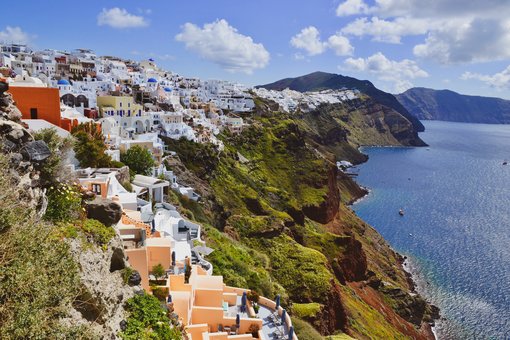 Top Five Things to Do in Santorini