The Malecon is perhaps the most universal symbol of Havana, a wonderful city with a history of five centuries. With an extension of 8 km, two historical constructions delimit it, to the west the Fort of Santa Dorotea de Luna de la Chorrera (Mesón de la Chorrera), built in 1645 and National Monument, which protected the mouth of the La Chorrera river, today known as Rio Almendares. To the east at the other end of the boardwalk we will find the Castillo de la Punta which protected the entrance to Havana Bay.

The life of this Wonder City of the 21st century grew alongside the Malecon, from east to west, from the colonial Historic Center to the modern neighborhood of Vedado and the entrance to the tunnel under the Almendares River, which connects it with the aristocratic Miramar. No other site allows us to get to know Havana better and its people as well, the present and the past of a city close to celebrating 500 years of fascinating stories, and they existance of that wide avenue along the coastline, protected by the rustic concrete wall that challenges the waves and serves as a resting place for walkers. 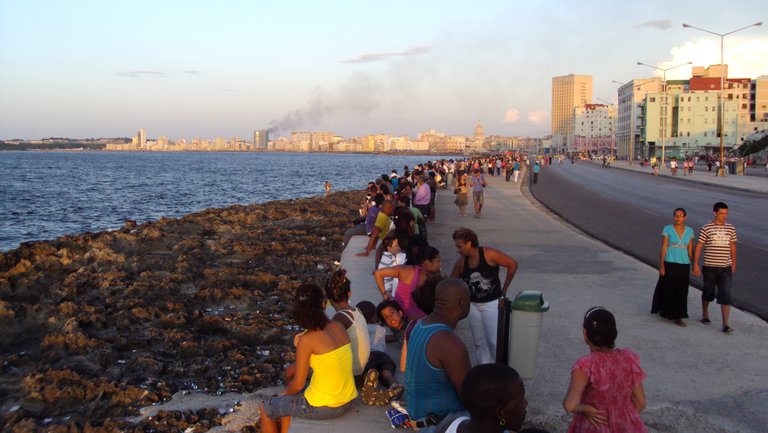 El Paseo del Malecón is a social mirror, a reflection of Havana's culture. It's visited by groups of friends to celebrate, to sing, dance, musicians listening to or playing their favorite rhythms in fraternity and harmony, urban tribes of the most varied affiliations gathered somewhere in the wide conversational space. It's visited by families who wish to reduce the heat with the sea breeze and also those who are going to rest in the afternoon or as we say the Cubans "to take a ten" (referring to ten minutes of rest) to fish, exercise, listen to music and chat about sports. Thousands of Cubans have met on this Havana walk and many are those who have found love feeling their passion with the first kiss.

The Malecon is a very diverse kaleidoscope and is the most democratic space in Cuba and the only recreattional place in Havana, it,is opened 24 hours every day of the week. The Malecon is a day viewpoint and an alternative club under the stars at night. A balcony from which the blue immensity is viewed and fresh air is breathed. Sitting there, you dream and enjoy unparalleled sunsets.