Best Places to Visit in Rishikesh (A Detailed Guide)

Rishikesh was a two-week exploration. I was living there and walking through the streets like a madwoman. That's how Rishikesh should be treated and treaded on. Consuming every bit of it and producing every bit of yourself-all at the same time. I officially had an itinerary planned and colour-coded a month prior to the journey, but I did not even take a look at that. In Rishikesh, all itineraries will fail you, as you know that the only itinerary is your foot, always at your disposal. 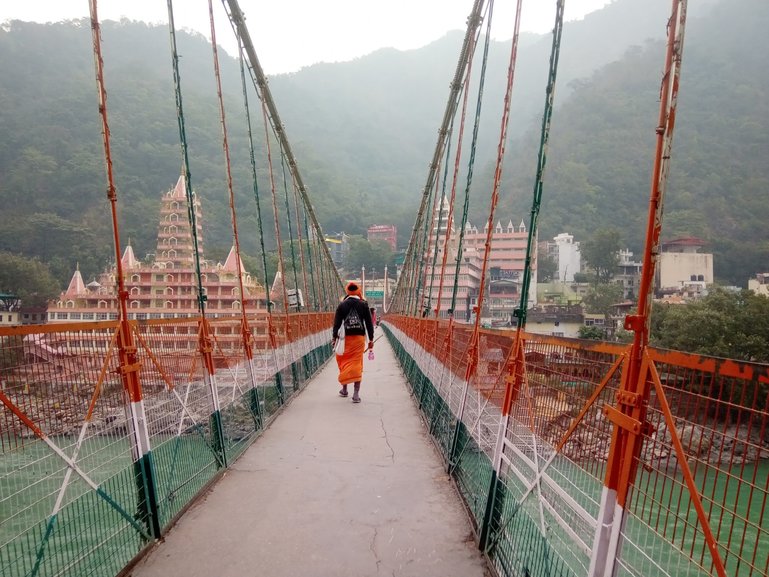 Laxman Jhula is a suspension bridge connecting two villages in Rishikesh; Tapovan in Tehri Garhwal and Jonk in Pauri Garhwal. After the devastating flood (October, 1924) washed away the bridge, it had to be rebuilt in 1939. This time the Jute bridge was replaced by an iron bridge. The bridge is open for the use of pedestrians only.

The local mythology stands erect on the pillar that Laxman crossed the mighty Ganges on the jute ropes of the bridge. That's how it retained its name Laxman Jhula.

The stretch of green water and the white ripples near the stony obstructions compliment the beauty of this bridge. It's the surroundings, the cows and dogs, the vendors selling street food-the line goes straightway in a parallel frenzy. At night the bridge adorns itself with long yellow lengths of lights. From the rooftop of the nearby cafes, you can live within those lights and enjoy a local man singing an Uttarakhandi song. 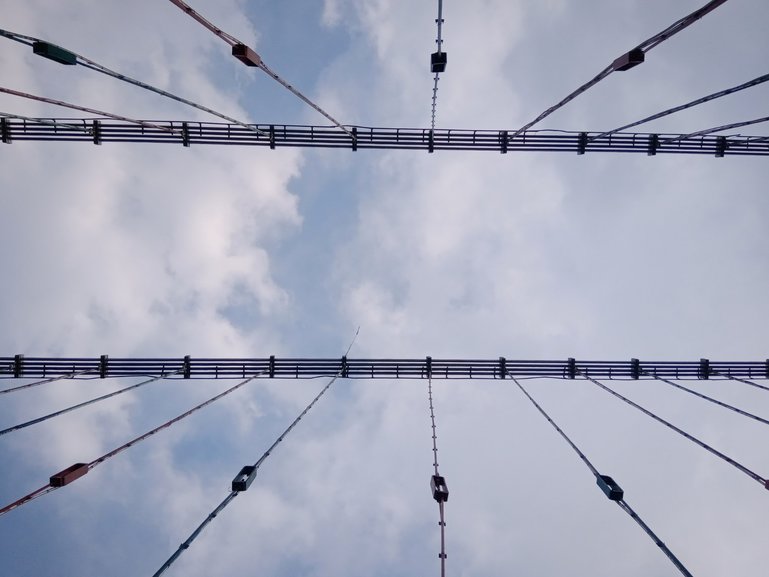 Ram Jhula is another iron suspension bridge in Rishikesh, making it one of the three major bridges in Rishikesh. Ram Jhula has a higher span (750 feet) than Laxman Jhula, probably the reason why vehicles are also allowed to run through the bridge. It works a s a link between the Sivananda Nagar area of Muni ki Reti in Tehri Garhwal and Swargashram in Pauri Garhwal.

There is an endearing sense of openness along the roads leading to either end of the bridge. The river has a different pace after a few steps. I have been near and around the bridge almost every day in two weeks. A young girl sells Ramphal on the way to the bridge. The local men and women are open to conversations and takes you in into their lives as soon as you bare yourself to them.

I asked one vendor for directions and she said that since I am going that way, I must let some man (I forgot the name) know that his mother-in-low is looking for him. That's how it is with the people here. They know how to blend in and imbibe you in their daily caricature as well.

Gita Bhawan, Parmarth Niketan Ashram and many other ashrams are scattered around Ram Jhula. The famous restaurant Chotiwala (I had Sabji Puri there) is also near the bridge.

Sita Jhula is the last of the bridges in the line. Given that Laxman Jhula and Ram Jhula are exceedingly famous among the tourists, Sita Jhula doesn't get much spotlight in the tourist book. But it is one of the most beautiful bridges, especially for the water below. The current is way too intense and white small waves make more noise than anywhere along the stretch.

The walk from Laxman Jhula to Sita Jhula has the smell of Rishikesh squeezed within its divine aura. After sunset the houses in the distant mountains look like stars within reach. In winter the wind will take your breath away. 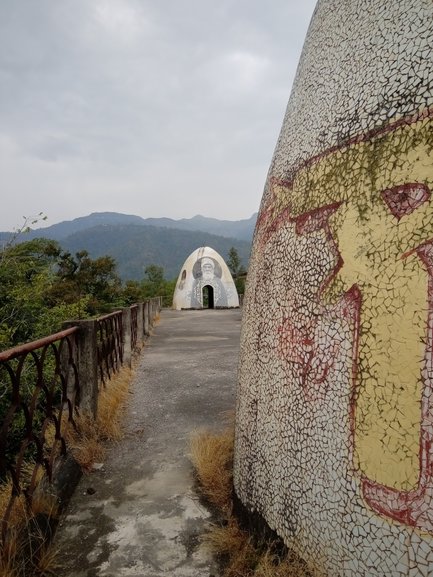 Chaurasi Kutia, more prominent with the tourists by the name of The Beatles Ashram, is situated in the foothills of the Himalayas. Primarily known as International Academy of Meditation, it adopted its later name after the Beatles stayed here for months to learn Transcendental Meditation from Maharishi Mahesh Yogi. The Ashram is in proximity to Rajaji Forest area on a 150 ft high cliff on the hill Manikoot.

The Ashram opens at 10 am and I was the first one there at 10:15 am. There is a nature trail which gives you the feel of the jungle and if you get drenched in rain, like I was, chances are you will end up being drowned in the ecstasy of the place. There are two buildings looking like abandoned structures from the outside. All you need is to climb the roof and you know you are in close contact with something greater, bigger and larger than yourself. The dome-shaped meditation caves on the roofs (the same pattern adopted for other such caves scattered all around the area) were made especially for the four Beatles. The view from the roof is priceless. 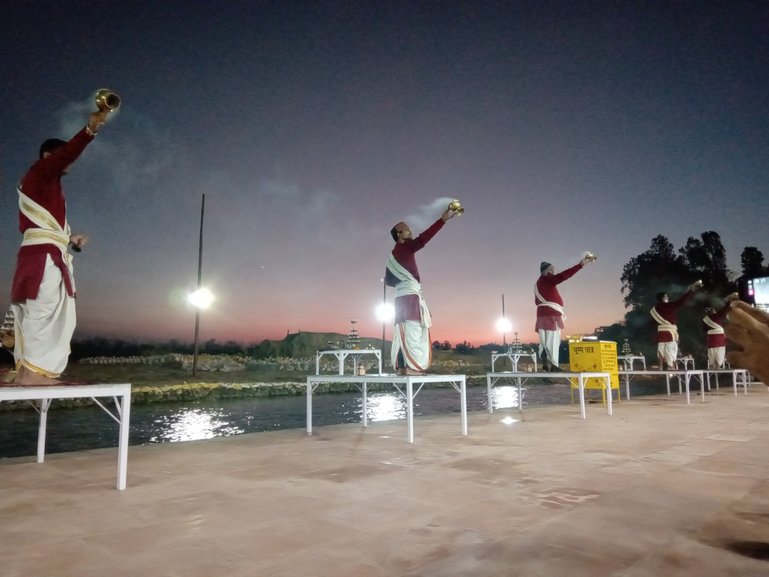 Every place has its own share of treasures, except that Rishikesh has a garland of treasures. One such treasure is Triveni Ghat. Evening Aarti is a regular course of life synced in the outline and culture of Rishikesh. At Parmarth Niketan Ashram, temples near Laxman Jhula and Ram Jhula and also at slight corners, aarti, small or big, has its own flavour of Rishikesh. But the melodrama of the occasion covered up in the simplicity of peoples' devotion towards a positive entity (to me, it's the nature) comes to its supremacy at Triveni Ghat.

Priests confront the almighty Ganga on high stands with the offering of faith in their hands. There is a group of devotees singing songs of devotion in the back. The mahaaarti starts at 6 pm, to be precise and continues for around 20 minutes.

The process, the beauty of the choreography and the positive energy amalgamated for an unknown reason and the small pradips sent out by the devotees to the water of the river bind us all together, at least for that moment. 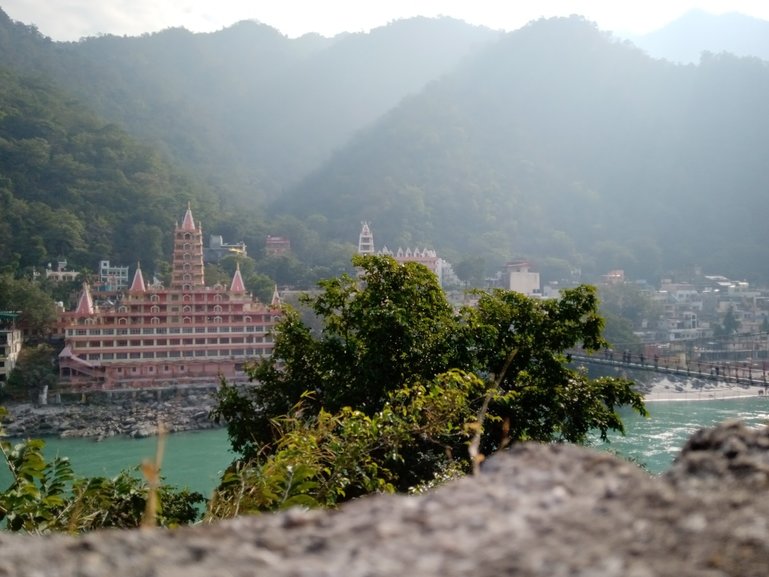 Once you cross Laxman Jhula from the Tapovan site, Tera Manzil Temple will fall exactly on your right hand. There is a food stall on the opposite street which became my breakfast expedition for pretty much every day. This multi-tiered temple, also known as Trimbakeswar Temple, has a unique combination of 13 tiers.

Located at a walking distance from Ram Jhula and near Parmarth Niketan Ashram, Gita Bhawan is a large complex with around 1000 rooms for accommodation. It is free of cost and generally filled with devotees covering a long distance to dip in the Ganges. It was mostly empty at the time I visited, due to the pandemic. But under normal circumstances the place remains reserved with people from all over India. Also photography is prohibited here. 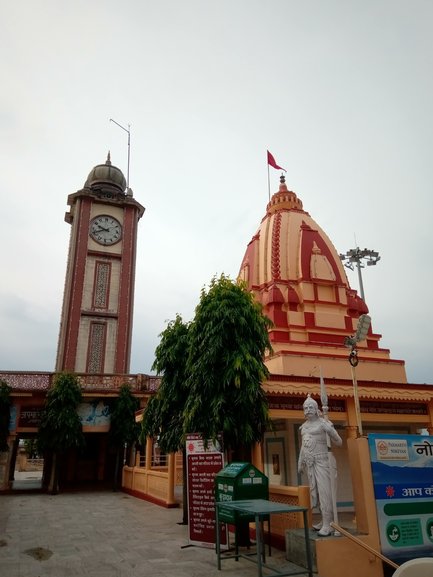 Walk along the Ganges for a few yards and you will come across a beautiful building with an aarti ghat right opposite it. There's a statue of Hanuman with Ram and Sita placed inside his heart. The work of such delicacy (keeping the religious aspect aside) is positioned hither and thither throughout Rishikesh.

I couldn't go inside the Ashram (again due to the pandemic, it was closed for visitors). But it is generally open to visitors and the aarti starts at 5 pm.

To reach Swami Dayanand Ashram I took up the banks of the river as my companion. The locals told me to move along the bank and I will reach the Ashram. Hence started my walk from Laxman Jhula, along with Ram Jhula, Sita Jhula and a few more meters, and I reached the place I have heard so much of.

Swami Dayanand Ashram provides meals three times a day (breakfast at 8 am, lunch at 11:30 am and dinner at 7 pm) and also tea thrice a day. And all this is completely free of cost. The meal is simple and healthy.

On the day of my visit, the meal was made by a monk on the occasion of his birthday. Rice, daal, dhania paste and an amazing white desert. There are in-house volunteers who serve the food, only you need to cleanse your own glass and plate after the meal. 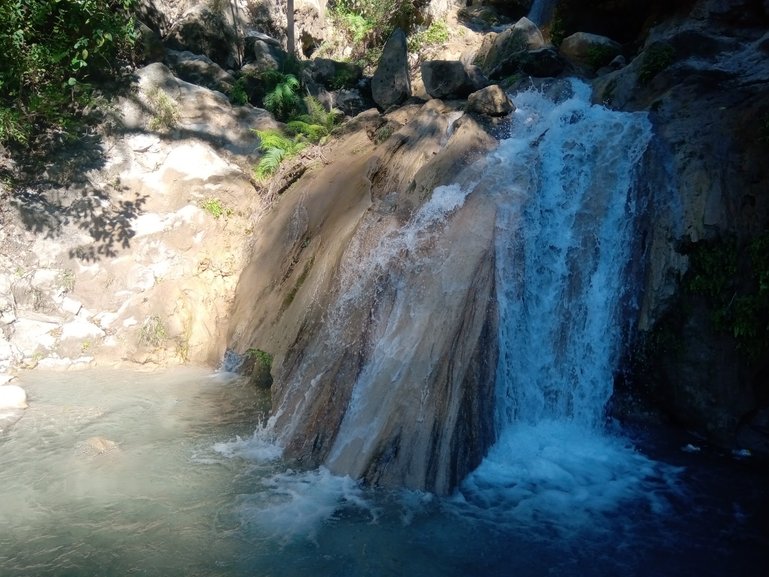 Neergarh Waterfalls is the confluence of three waterfalls coming together to shape one mighty waterfall as high as 25 ft. There's a trek from a certain point (where you need to pay Rs. 30) for 15 minutes to reach two bridges and a stream of water falling through. If you are heading that way, take the nature trail and you will end up having a secluded time to yourself through the forest.

And if you are an explorer who doesn't want to limit herself/himself to the trek upto the waterfall and wants to experience the village life, there is an amazing trail all the way up to the village Neer. 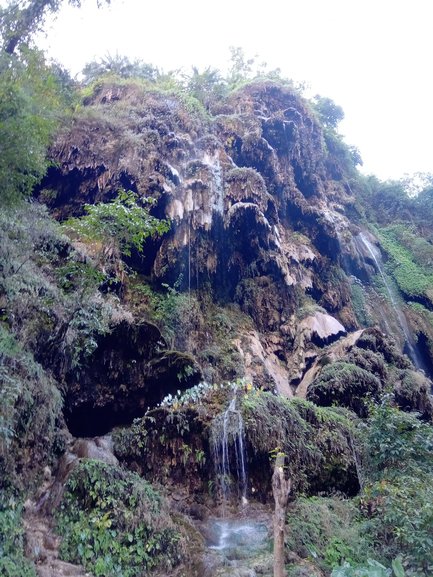 Situated at a distance of 6.5 km from Laxman Jhula on Neelkanth Temple Road, Patna Waterfall flows at its own will from and around massive limestone caves. The trek leads itself through Rajaji Forest upto the waterfall's abode, a stone's throw away from Patna Village. Locals let the mules carry the essentials all the way up to the village. Mules are frequent, so are the pahadi men and women nodding their heads along to the visitors.

The maggi points are quite a few near the waterfall. But Maggi is highly overpriced here (Rs. 50), yet the secluded sense of being makes up for it.

How to Reach Rishikesh

By bus: Rishikesh is well connected with all the cities by road. Regular buses run from Delhi, Pune, Varanasi and others.

By train: The nearest railway station is in Dehradun. From Dehradun, Rishikesh is a 1-hour-ride. Local buses are frequent from Dehradun to Rishikesh.

By flight: Jolly Grant Airport in Dehradun is the nearest airport. Again, from Dehradun you will get local buses to reach Rishikesh.

I am Ipsita. I am a solo female traveller and a travel writer.

A Day Trip in Lansdowne, a Quaint Hill Station & a Step Closer to Nature

Volunteer in the hills of Rishikesh, The Yoga Capital of the World!