If you have never been to Malta, you will wonder which are the unmissable, most suggestive places that you cannot miss during your tour of the island.
In this article we want to introduce you to those places and experiences off the traditional tourist itineraries, places that retain an intact charm where you can taste typical Maltese cuisine, enjoy breathtaking views, visit postcard beaches; a set of experiences that will surely enrich your stay in the Maltese islands.

Malta, or rather the Maltese Islands, are only 90 km from the southern coast of Sicily and on clear days it is even possible to see the profile of the Sicilian mountains on the horizon. With its location in the center of the Mediterranean, Malta has over the centuries been the crossroads of different peoples, civilizations and cultures that have all left an imprint still present in Maltese culture. This is clearly visible in the local language, the only one of Semitic origin and clear Arabic derivation, unique in Europe, or the educational system inherited from the glorious British colonial past or the typical cuisine with Mediterranean and Middle Eastern influences, or the many surnames of Sicilian origin.

Let's go to discover the places and experiences that you can live during your tour in Malta or excursion to Gozo:

Ghar Lapsi is a small hidden bay, little frequented by tourists, located in the municipality of Siggiewi 1 km away from the famous Blue Grotto.
The rugged and rocky coast forms in Ghar Lapsi a natural pool with crystal clear blue / green waters and a rich marine fauna that make it the ideal place for snorkeling and scuba diving lovers, here you can find stingrays, seahorses and 200 meters of intact coral reef.
Ghar Lapsi is a popular spot with local fishermen, where you can taste the freshest fish expertly cooked by the owners of a small family-run restaurant located directly on the shore of the bay. A fish-based lunch or dinner at Carmen's Bar & Restaurant, sitting in front of the crystal clear sea of Ghar Lapsi, is an experience not to be missed!

Fomm ir-Rih is one of the wildest and most isolated beaches in Malta, located in the municipality of Bahrija it is only accessible via a steep path but the views are worth the effort. The beach offers fantastic views of the surrounding cliffs, valleys and the azure Mediterranean Sea.
Due to its particularly isolated position, it has remained untouched by any type of building development, keeping intact its authentic and natural charm,

Divers and snorkelers will also appreciate the seabed of this pebble beach. To avoid on windy days from the north - north west due to the sea currents.
The bay and its surroundings are also particularly suitable for trekking in the winter and spring months
From Rabat, follow the signs to Bahrija, go through the village and at the end at the first fork, turn right, go downhill for about 2 km and at the second fork go right again and you will find yourself in a small parking lot. This is the final destination: Fomm ir-Rih. You can also easily use Google Maps to find this place. 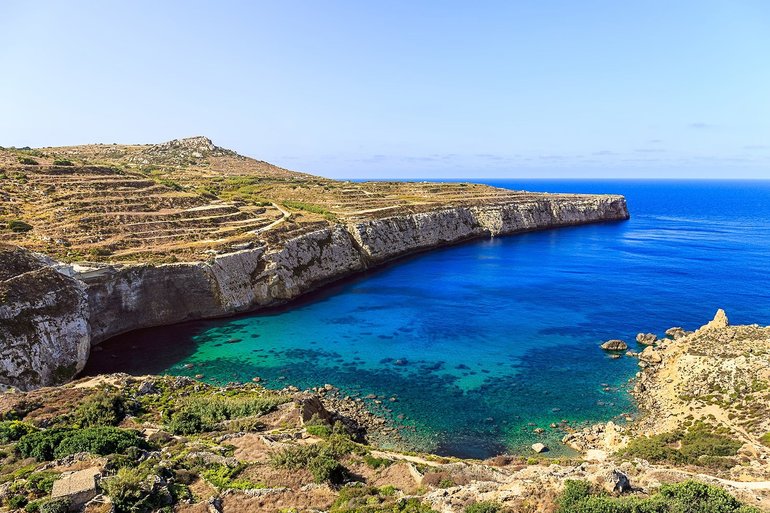 Inspired by local produce, traditional recipes handed down from generation to generation, similarities in flavor influences from neighboring countries, but unique in its approach to freshly available ingredients, traditional Maltese food is something you just have to try. And there is no better place to try authentic Maltese food than on a tour in Valletta! The small Maltese capital is full of many bars and restaurants offering typical traditional dishes, such as stewed rabbit, traditional pastizzi, sweet Imqaret, stuffed ravioli and the famous Ftira a richly stuffed focaccia. Among the many places where you can learn about Maltese cuisine, we recommend the authentic atmosphere and quality of Nenu The Artisan Baker.

Nenu The Artisan Baker is a dining venue which, located in a typical bakery, combines traditional Maltese cuisine, history, memorabilia and entertainment in a friendly and relaxed environment right in the center of Valletta.
Nenu the Artisan Baker is a place suitable for young and old, Maltese and tourists, eager to taste authentic local cuisine served in an ancient setting. The Ftira da Nenu is something to try !! 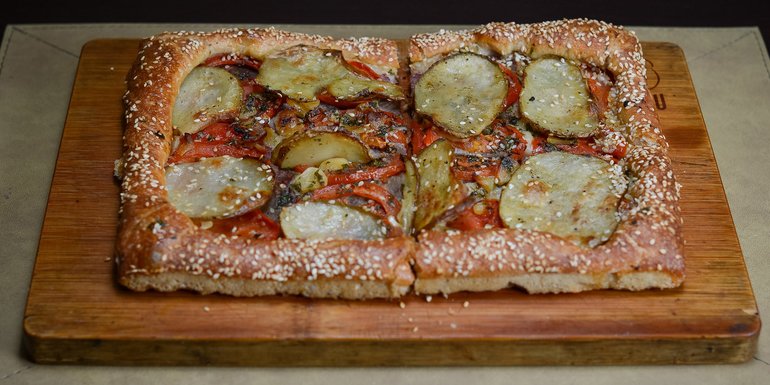 The Sanap cliffs are one of Gozo's most hidden secret places. Located on the southern coastal side of the island, the cliffs, up to 130 meters high overlooking the sea offer magnificent views of the Mediterranean, especially at sunset to the nearby bay of Xlendi.
Unmissable for those who go to Gozo for a tour or who stay there, they are also a transit and departure point for numerous trekking itineraries, a walk along the cliffs is absolutely an experience not to be missed. to lose. The majestic Sanaps (Sanap Cliffs) are our favorites, easily reachable from the center of the village of Munxar, follow the signs, and continue for about 1 km along the small country road, until you reach a small clearing. The Cliffs are in front of you .. 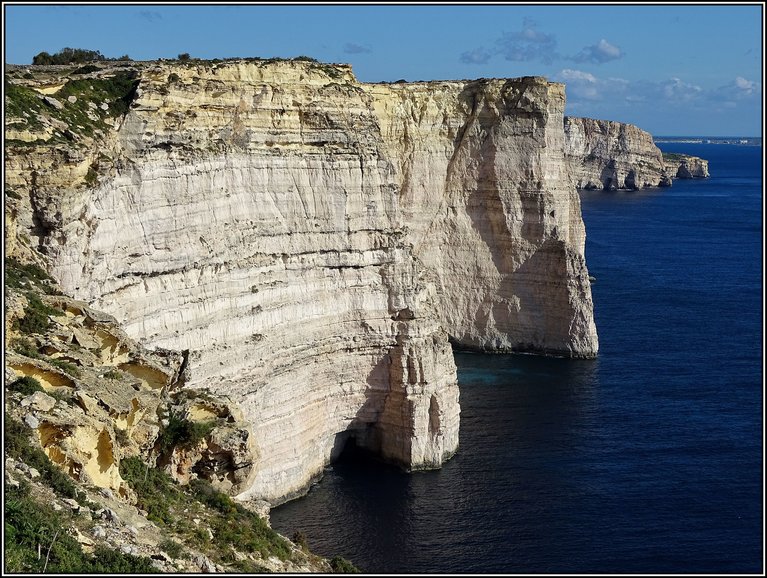 Where can you have the best view of the whole island of Malta? Surely from Mdina ... the ancient capital rests on a small hill that dominates the entire island for this reason it was chosen as the capital during the Arab invasion and then fortified by the Normans of Sicily and the Knights of San Giovanni later ..
Mdina retains a unique charm, also called noble city or city of silence for the quiet that it breathes, and the numerous noble palaces of the ancient families that adorn it, during your Tour in Mdina, we recommend you stop for a cup of tea or café at Palazzo De Piro, a 17th century palace located within the walls not far from the Church of San Paolo. Palazzo De Piro, managed by Xara Palace Relais & Chateaux, is a fully functional place for private events, conferences and banquets, the structure houses a bistro and a museum, as well as the unmissable panoramic terrace from which you can enjoy a breathtaking view 180 ° over the entire island of Malta, suggestive and unmissable! 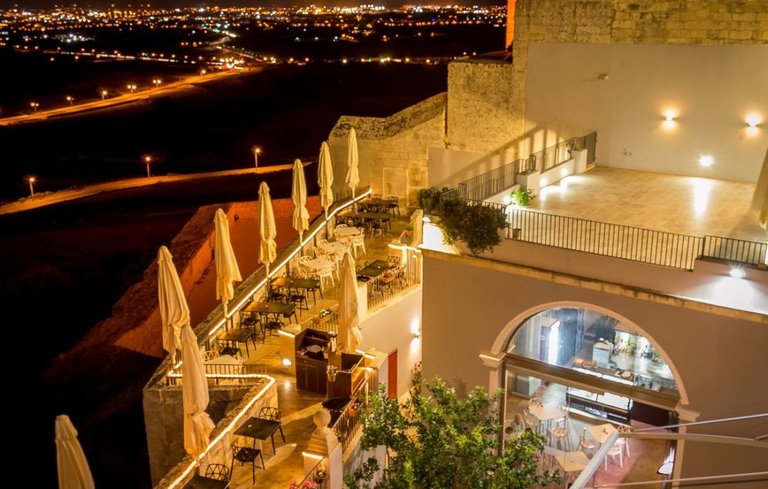 Discover The Salt Pans of Gozo

On the north coast of Gozo, just beyond the famous bay of Qbajjar, you will find yourself in front of a rather particular site: a checkerboard of salt flats carved into the rock, which stretches for a few kilometers, this site formed in antiquity by the Phoenicians for the collection of salt ore, and then used by the Romans is believed to be the oldest functioning in the world.
The salt pans are rooted in the Gozitan tradition of sea salt production, a custom that has been handed down for generations in local families. During the summer months you can still see the locals scraping the salt crystals off the rock face, all of which are hand picked, processed and packaged!
The salt flats located in Xwejni Bay extend along this coast and are an ideal place, of peace and tranquility and also very scenic for a panoramic shot to show to friends.
Along the road and on the edges of the salt pans it is still possible to find people who dedicate themselves to this ancient craft, and sell the collected salt in small bags. These salt flats are incredibly picturesque and the perfect peaceful place to stop on a Gozo Tour You won't be disappointed! 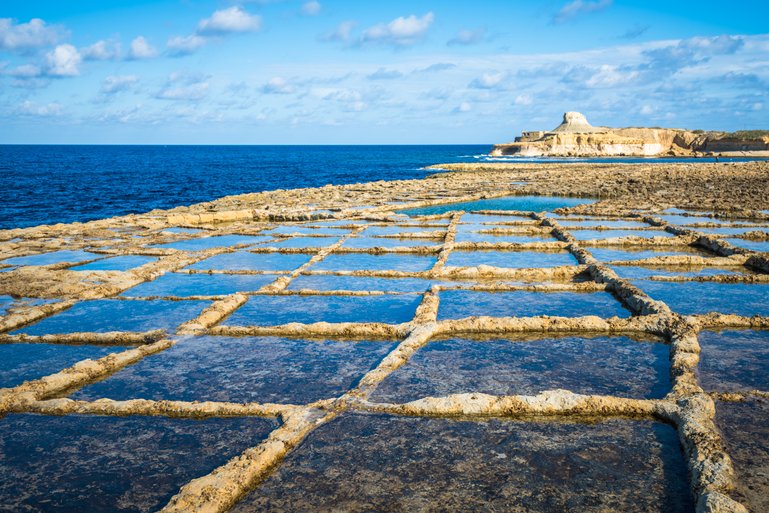 Malta has a long history with various influences alternating over the centuries, which are also reflected in the architecture, all of which have led to the construction on the island of ancient noble palaces, sophisticated aristocratic residences and much more. During your tour to a noble palace, such as Palazzo Parisio called the little Versailles for its gardens, or Palazzo Falson in Mdina, or the splendid Casa Rocca Piccola in Valletta which is still a house inhabited by the heirs of the family, you will be impressed by frescoes, magnificent marble, mirrored walls, trompe l'oeil, paintings, extravagant gilding, refined furniture, beautiful gardens and other fantastic decorations.
Most of these buildings are open to the public and can be visited throughout the year.
We recommend visiting at least one of these palaces during your stay in Malta, it will also be an opportunity to take a dip in the past and learn the habits and customs of the Maltese nobility as well as understanding how life on the island was in past centuries. 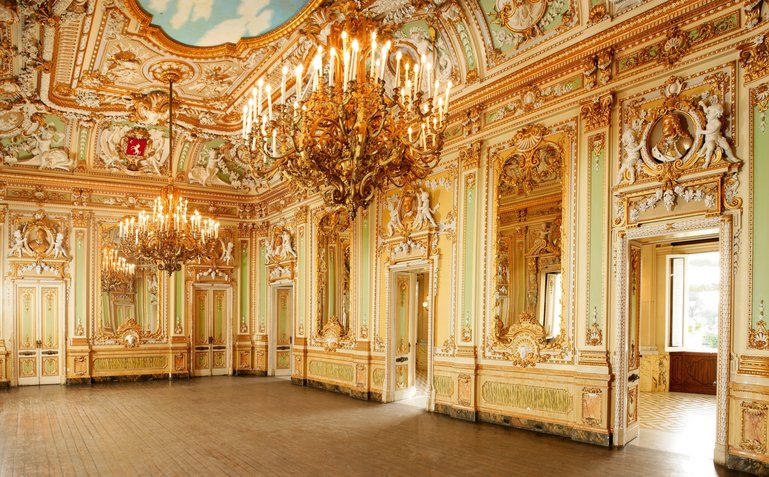 We are an European DMC since 2014 based in Malta and with regional office in Tuscany and London, providing a wide range of touristic services in Italy, Malta and others Mediterrenean countries. We provide comprehensive travel solutions for individuals and small groups, our clients are travel agencies, tour operators and independent travelers from all over the world. Mission : Our Company’s goal is providing high quality services, worry free travel experiences for our clients before and during their travel with us. Reliability on service, customer care, and efficiency are our strong points. Vision : Our dedication and care to det... Read more

The 14 Best Things to See in Malta

Malta - On a Budget (It Sizzles)

Our Malta Experience During the Pandemic 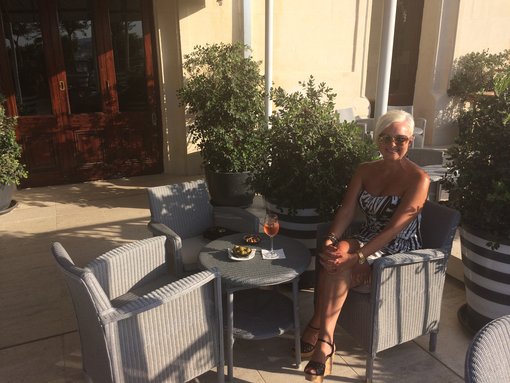