The small city of Bundi is often overlooked by travellers to Rajasthan. The city is, in fact, home to a palace rich with mosaics and murals, an imposing fort and friendly locals. What's more – there are a refreshing lack of foreign tourists. Indeed, the absence of hassle from touts, who are inevitably present elsewhere in Rajasthan, is refreshing. Thankfully, the coach parties concentrate on the more popular of Rajasthan's destinations and Bundi is left in peace.

We arrived in Bundi from Ranthambore, where we had both suffered from a severe bout of food poisoning. Although, we were still very much under the weather for most of our time in Bundi, we nevertheless have very fond memories of our few days there. The colourful streets. The eye-catching signs that adorned the buildings. The locals who greeted us with waves as we passed. The wonderful traditional haveli we stayed in. Somehow, Bundi felt like a real Rajasthani town. and not one that was just putting on a show for tourists. 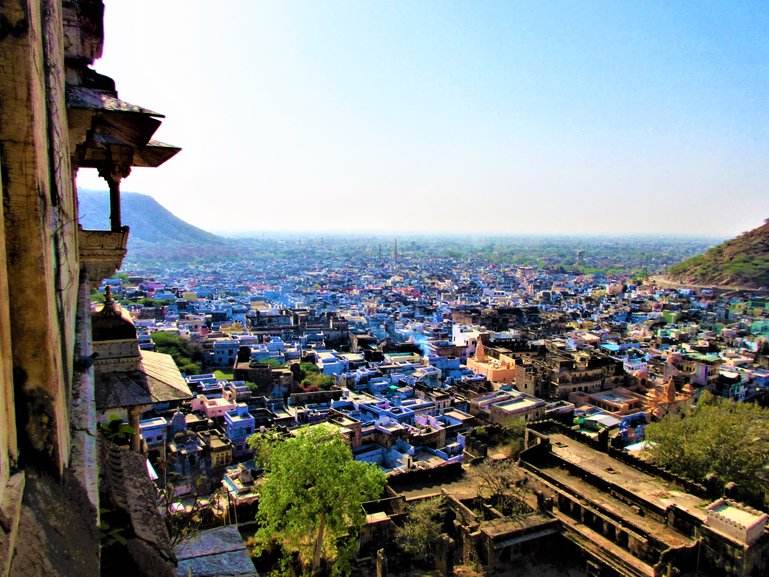 View of the City from the Palace

Dev Niwas Heritage Hotel, a traditional haveli located in the heart of the city was, indeed, a great choice of accommodation. With panoramic views of the palace and the fort from a roof terrace, the haveli dates back to 1684 and was once inhabited by royalty. Not only was it very reasonably priced, but the staff were welcoming and did everything they could to make our stay comfortable. When we weren't feeling well enough to eat at the roof terrace restaurant, the staff brought drinks with honey toast to our room. The décor of the haveli was ornate and Rajasthani in style. As a matter of fact, entering the building felt like stepping back in time to another era. 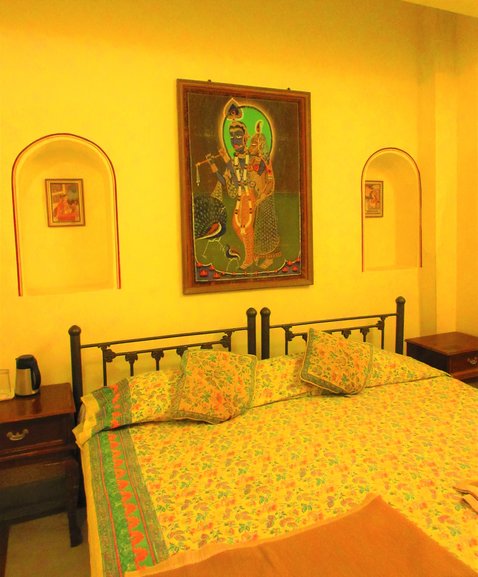 Once ruled by the Hada Chauhans, many of the houses of Bundi are painted in blue. This was the colour originally used by Brahmins in order to set their houses apart from the general population. Over time, everyone started painting their houses in blue. Apart from looking pretty, the colour also helps keeps the houses cool in Rajasthan's blistering summer heat.

Fringed by the Aravalli mountain range, Bundi is set in a valley amongst fields and orchards. The city is known for its lakes, temples and bazaars as well as its numerous stepwells and the narrow streets are fascinating to explore. Many of the shops are adorned with intricate murals, colourful artwork and signage. 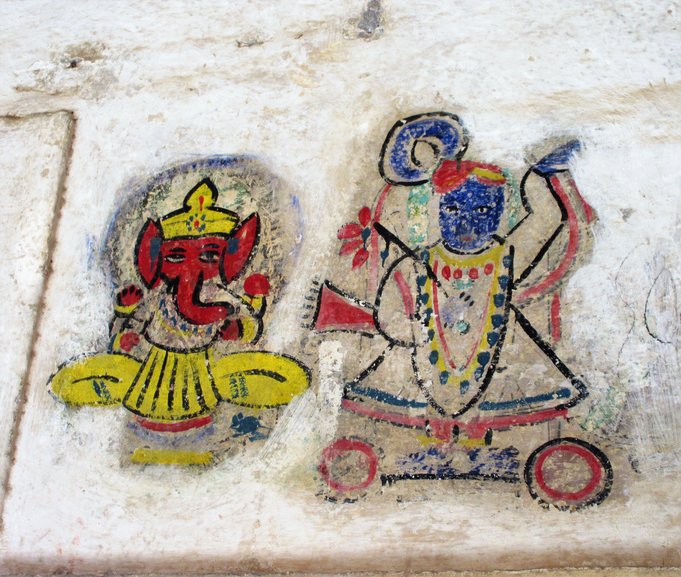 Sadly, still recovering from food poisoning, eating out in Bundi wasn't on the cards for us. This was a shame as there are some extremely good options and we would have loved to have sampled some of the local cuisine. Jay Cafe, which is close to the fort, is run by the gregarious Jay, who is apparently quite a character. The cafe serves delicious thalis and is vegetarian friendly. Jay also acts as a local guide. The Rainbow Restaurant Cafe is a relaxed rooftop restaurant which serves home cooked food. The friendly owner often plays guitar as an accompaniment to dinner. Last but not least, The Baori View Restaurant receives consistently excellent reviews for its tasty curries and hospitable staff.

Bundi has fifty stepwells. Many of them are in a state of disrepair, but the Raniji Ki Baori (otherwise known as the Queen's Stepwell) is undoubtedly one of the finest. Dating back to 1699, it is forty-six metres deep. The stepwell is also multi-storied and features places of worship on each of the floors. The highlights are the intricate carvings on the pillars and gate.

By comparison to the other royal palaces of Rajasthan, Garh Palace is somewhat modest. It hasn't been well maintained, but nevertheless, there are several beautiful frescoes within the courtyards and halls. Additionally, the fading Rajput architecture remains impressive despite its condition. 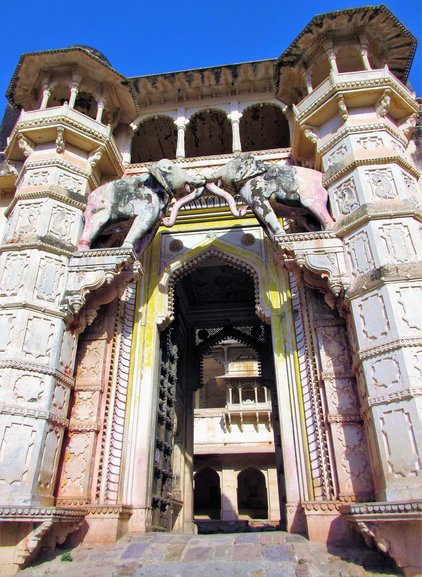 The Entrance to the Palace 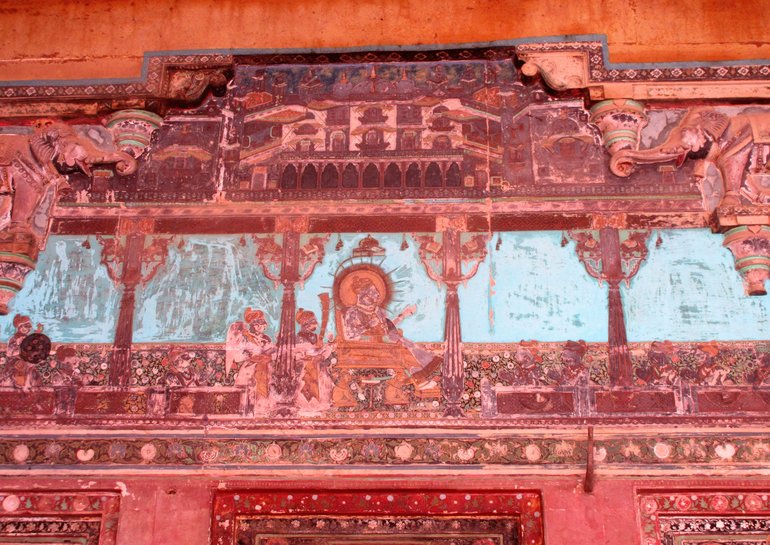 The 14th century Taragarh Fort is a steep thirty-minute walk beyond the palace. With a series of outposts, it has a walkway with panoramic views over the city and beyond. The fort itself is in a state of disrepair, but nevertheless has retained its character. Watch out for monkeys – don't unpack a picnic while you are there or it will inevitably be snatched away by the residents!

The lake is known to reflect the image of the palace and city upon its waters and is a major feature of the city. It's possible to walk around most of the lake and migratory birds can often be spotted. Additionally, look out for the temple dedicated to Varuna, which is half submerged in the water. Sukh Niwas Mahjal is a former hunting lodge and royal residence located on the edge of the lake. It is also said to be where Rudyard Kipling wrote some chapters of his novel, Kim.

Bundi's festival takes place in November and it's a fascinating time to visit the city. A wide variety of events take place from arts and crafts fairs to classical music and dance programmes. Camel and horse-riding contests are a popular attraction during the festival. Additionally, turban and moustache contests are highly competitive! The small city is festooned with decorations and revellers attired in traditional Rajasthani costumes partake in carnivals and parades. At night, firework extravaganzas fill the sky.

How to get to Bundi

Buses leave for Bundi from Udaipur, Sawai Modhopur, Jodhpur, Bikaner and Bijolia. Alternatively, the nearest train station is about 3.5 miles outside the city and it is possible to take the Mewar Express Train from Delhi. The nearest airport is in Jaipur, 210 km away and about three hours by road.

When to visit Bundi

The cooler months of October to March are the best time to visit Bundi. It can be a little chilly at night, but the days are a pleasant temperature for exploring the city.

A Trip to Magical Hampi, India