We always emphasize the annual niece/nephew backpacking trip is a learning journey. It's a weekend in Michigan to gain some backcountry and independent skills like setting up a tent or hammock, filtering water, making a fire, and of course, pooping in the woods. On the fourth annual trip, we landed in Luther, Michigan, to hike the Silver Creek Pathway alongside the fast-flowing Pine River. Our campers ranged from ages 8 – 16: Asa, Sylvie, Jude, Luke, Olivia, and Delaney. Josh and I are the lone adults in charge of keeping this crew safe, watered, and fed.
We asked the kids a series of questions after our adventure, and upon reading their answers, it proved to be a great way to highlight the trip.
1- Tell us about something you learned on the trip?
2- Favorite memory or activity and why? Least favorite and why?
3- Favorite camp food?

Hot topics, per usual, were weather-related, along with camp meals and snacks. It should be noted that kids at this age eat about five to six meals per day!!!

A Cold Night and Snack Attacks

We experienced a first on this trip. Everyone froze their gummy bears off on night one! It dipped into the upper 40s on Friday night, proving that a sweatshirt and sleeping bag layer (especially in a hammock) will not suffice. Saturday at 6 AM, I awoke to grumbling and teeth-chattering paired with the sounds of six kids building a fire for warmth, not to ward off mosquitos. Begrudgingly, I got up and fired up the Jetboil to heat water for some hot breakfast granola. The kids got creative and roasted their sausage bites over the fire on whittled roasting sticks. Yum, blueberry granola MRE's and fire-roasted sausage! Beef jerky or sausage bites was the fan-favorite snack. Delaney eloquently answered question #1, “Check the weather and bring more beef jerky!” Olivia chimed in with a similar theme, “Pack according to the weather, and you can always trade with someone to get more of the food you like.”

Trading for snacks was an ongoing activity. At all mealtime prep and fireside time, a furious frenzy of “snack day-trading” occurred, similar in intensity to the New York Stock (Snack) Exchange. Each camper gets a stocked snack bag filled with beef bites/jerky, fruit snacks, gummy bears, chocolate bars, peanut butter, flour tortillas, applesauce squeezes, trail mix, and granola bars. Of course, the beef jerky and chocolates provide the most bargaining power if you don't eat all your candy on day one!

Crime Scene and a Rope Swing

Thankfully Saturday warmed to a typical summer day, and we headed off on a day-hike in search of the rope swing I had read about in my hiking book. Instead, we found two things that day: a rope swing and a crime scene. While exploring the riverbanks and dune climbs, Luke discovered a ripped and waterlogged burlap bag, a bone, and a knife… all in a pile on the far side of the river. Luke and the kids decided the bone was human, perhaps the wrist or arm. The burlap bag, of course, was used to dump the body in the river, and the knife was probably the murder weapon. Hence, Luke's answer to question #2, “My favorite memory was finding the dead guy, Billy Bob Joe, because I found a knife.”

Josh smirked while examining the “arm bone,” finding it strikingly similar to a small animal carcass. Not to deter a scary campfire story, the dead-guy crime scene was discussed as we hiked north through the thick and scratchy canopy. We came upon the intersection of the ATV trail and the second suspension bridge that connects the hiking trail. We ambled down to the riverbank again and watched paddlers cruise around the corner to beach their kayaks or canoes. From that vantage point, Jude spotted the long rope dangling from a tree across the river. A frenzy of activity ensued to figure out how to get to it.

Hiking along the Pine River

To ramp up the adventure factor, Josh led the kids on a short and chilly swim. From the safe side, I snapped video and photos as each kid swung on the rope and splooshed and/or butt-dragged into the current. Everybody took a turn with a cheer. Eventually, Asa, Delaney, and Sylvie were cousin-pressured into a rope swing dunk. Only one mishap left Jude with nasty rope burn when the slack in the rope got stuck for one last swing. After a furious group swim back across, we decided to hike back to camp to see if we could catch a trout. 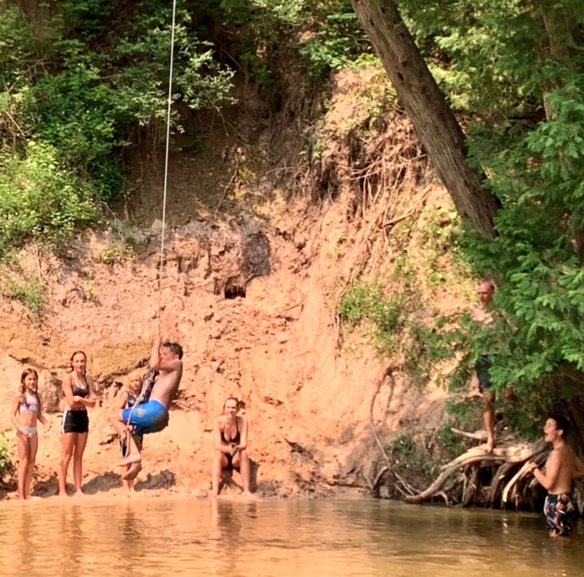 That last afternoon was a mash-up of gathering wood, hammock napping, devouring snacks, and attempts at fishing. Josh and Olivia gave it a solid try with a few bites, but Luke's attempt became a wet and cold low-light. He selected a bad entry point, misjudged the depth, and fell in up to his armpits. Jude describes the moment, “I liked when we all went on the rope swing and across the river, but it was funny when Luke fell in the river, but my least favorite was when I got the rope burns.” Luke added, “Don't go near the river wearing all your warm clothes and things you're planning to sleep in.”

More storytime and a crackling fire lit up our evening, followed by unexpected rumbles of thunder around 10 PM. We quickly sent the kids to secure their tarps and put gear under the rain flies. As the storm approached and lit up our sky, all six kids crammed in Sylvie's tent, played cards, giggled, and let some flatulence fly, no doubt from eating too much jerky. Josh and I lay in our tent cracking up, listening to their stories and laughter. Eventually, everyone retired to their sleeping bags while Mother Nature dropped a doozy of a thunderstorm on us for about an hour!

I'll leave you with one piece of advice from our youngest camper, Asa, who unfortunately contracted poison ivy (again) after returning home. “Don't go by plants with purple stems and sometimes purple bubbles on the leaves.” 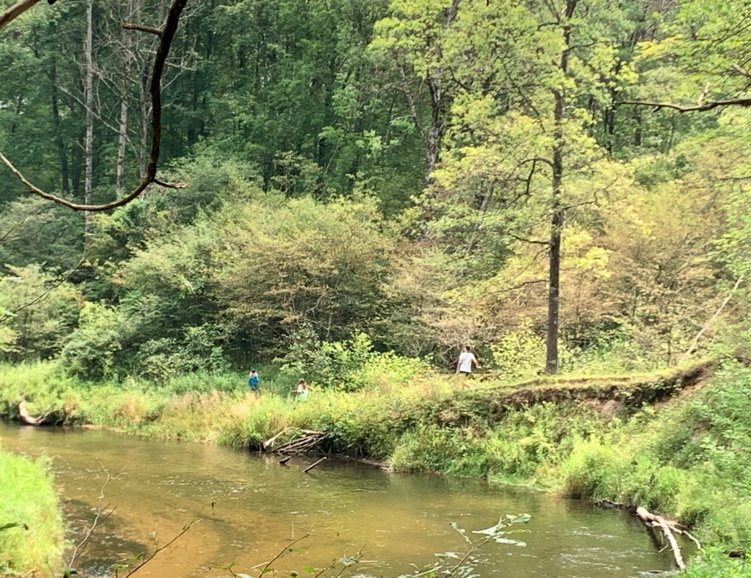 Hiking along the Pine River on the Silver Creek Pathway 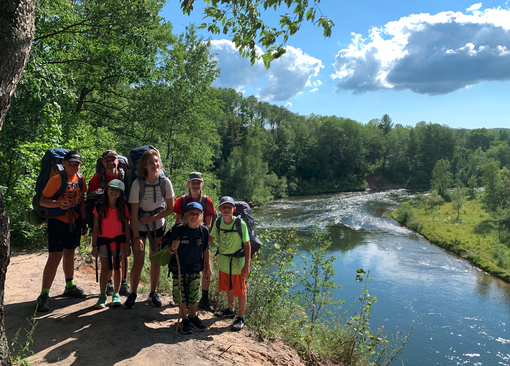 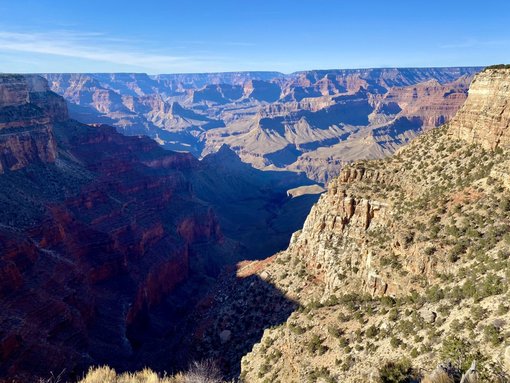 Best of the Grand Canyon 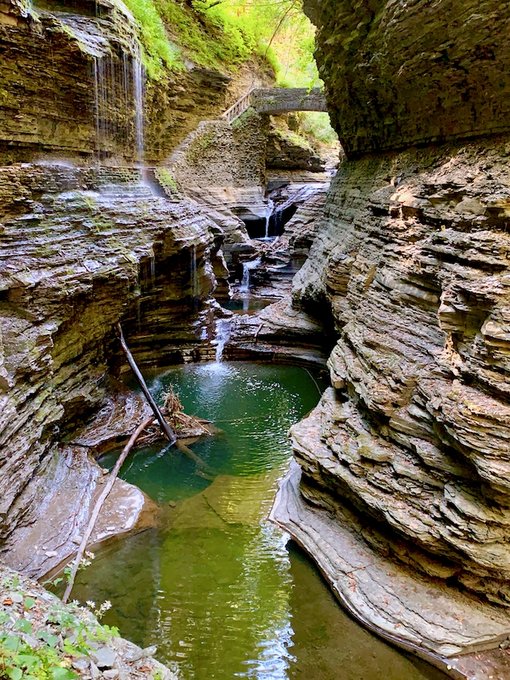