Top 11 Things to Do in Modena, Italy

Are you planning a short trip to the Italian city of Modena? If you traveling in the northern region of Italy and would like to make a stopover in the stunning town of Modena? Then this post is right for you. I made this list about the best things to do and see in Modena.

Modena is located in northern Italy, in the region called Emilia-Romagna. The historic medieval city center is home to several UNESCO World Heritage Sites. In the year 1997, the Piazza Grande with its cathedral and its bell tower was added to the list. In addition, Modena is known for its balsamic vinegar and other culinary specialties. Apart from that, Modena is one of the most popular destinations for automobile fans of Ferrari.

Piazza Grande is the heart of the city and surrounded by several historic buildings such as the Duomo di Modena and the bell tower, Torre della Ghirlandina. The Palazzo Comunale is the town hall of Modena and can also be visited. The beautiful square itself, with its paved stones, is a popular meeting place at any time of the day. You should simply settle down in one of the cafés in Piazza Grand and enjoy the atmosphere of Modena.

The Duomo di Modena is the cathedral of the city and a magnificent religious building from the Middle Ages and has been declared a World Heritage Site by UNESCO. The cathedral has a bell tower called Torre della Ghirlandina. And when visiting the Cathedral of Modena, you should also visit the bell tower. The tower is the landmark of the city and approx. eighty-seven meters high. The entrance fee is only 3€ per person and the tower is open from Tuesday to Sunday. Sunday. After climbing the 200 steps you will be rewarded with a great view of the city. 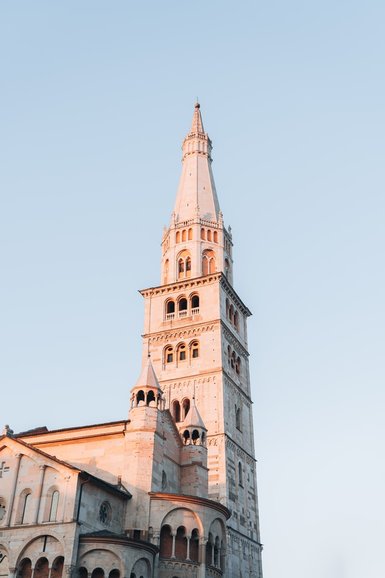 Photo by Michael Sala on Unsplash

2. Stop by the Museum Casa Enzo Ferrari in Modena

The Ferrari Museum in Modena is a must for every Ferrari lover. The museum is dedicated to the founder Enzo Ferrari. You can visit its birthplace and an exhibition of vehicles from different decades. In the museum you get an insight into the life of Enzo Ferrari. How he started as a motor vehicle fitter and designed his first own racing car and thus made a career as a racing driver. With the founding of Scuderia Ferrari and its own racing cars, Ferrari has become the famous brand it is today.

The exhibition building itself is architecturally very impressive and stands out for its bright yellow. The museum also houses a cafeteria as well as a Ferrari store, which rounds off a visit for every Ferrari fan. 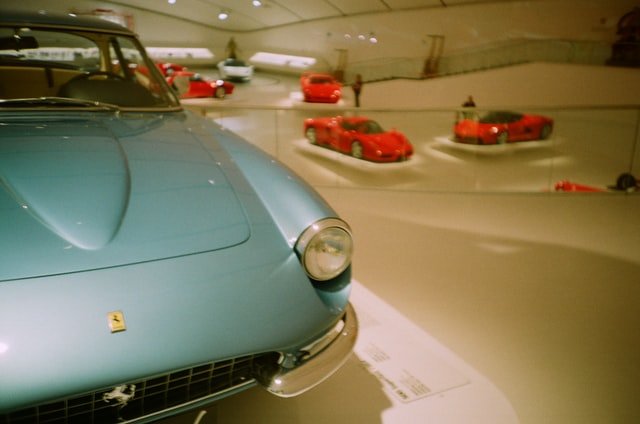 Photo by Anton Luzhkovsky on Unsplash

However, if you have not had enough of Ferrari, you can visit another Ferrari Museum in Maranello.
For Formula 1 fans, this day trip is almost a must-do! In the small town of Maranello, about 18 km from Modena, there is the Ferrari production site, the second Ferrari Museum and the Formula 1 racing team located.

Extra tip: There is the possibility to book a combined ticket for about 24 euros for the museum in Modena and in Maranello together.

In the historic city center is the Palazzo dei Musei of Modena. It is home to a number of cultural institutes that tell the story of Modena. On five floors there are for example the City Museum, the Historical Archive, the Luigi Poletti Art Library, the Library and Gallery of the Este Family and other exhibitions.

For art lovers, the Galleria Este is an absolute must. It is located on the top floor of the Palazzo. Modena was for a long time under the rule of the Este family. The paintings and other works of art come from the art collection of the ruling Este family. The collection shows in chronological order several centuries of Italian art history.

Where: The museum is located in Largo Porta Sant'Agostino, 337. You can find the opening hours, entrance fees and other information at the following link: PALAZZO DEI MUSEI 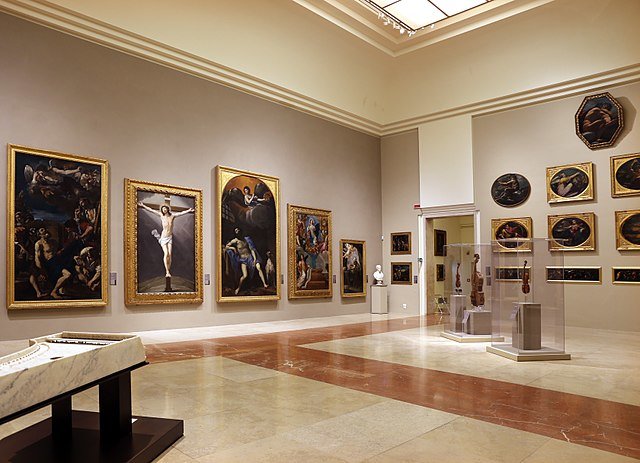 Modena is the hometown of the famous tenor Luciano Pavarotti. And if you want to know more about the famous tenor, you should pay a visit to Casa Pavarotti. The villa used to be the residence of Luciano Pavarotti and now houses the Pavarotti Museum. Through the house leads a fixed path on which learns more about the life of the tenor. During this tour you can listen to his music, playing in the background. Apart from his personal life and his music career, you can learn that he was also a gifted painter. His paintings, the awards he won, and some of his characteristic garments are also on display in this Museum.

Extra tip: There is a free Pavarotti app that you should download before going to the museum. It includes the guided tour of Casa Pavarotti. You can find the app in the Apple Store and the Google Play Store. 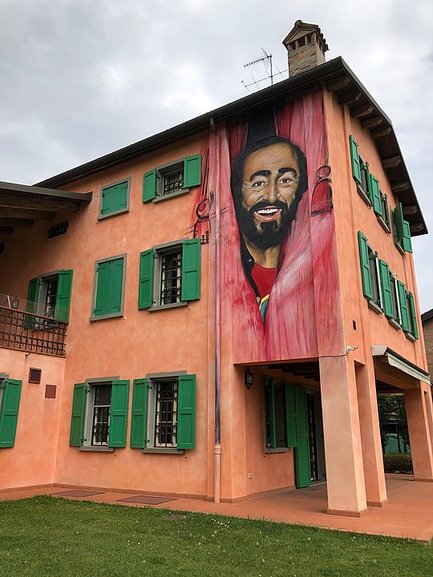 The museum is located outside the city of Modena. Unfortunately, there is no bus line that goes to Casa Pavarotti. Therefore, you must go there by car, or you can take a taxi. There are special rates for a taxi ride from the city center or from the train station, for about 40€. This price includes a round trip and with a 1 hour waiting time.

If you don't want to go to the museum, you can alternatively visit the statue of Luciano Pavarotti. The monument to the famous opera singer is located near to the center near the Palazzo Ducale in Via Carlo Goldoni. Walking around the building complex, you will reach the entrance of the Pavarotti-Freni Theatre.

The opera house is incredibly old and was opened in 1841. The interior still looks like it did back then. The Teatro Comunale was later renamed in 2008 after the great tenor Luciano Pavarotti. Today you can still attend performances, and apart from that, the theater also offers guided city tours of Modena. 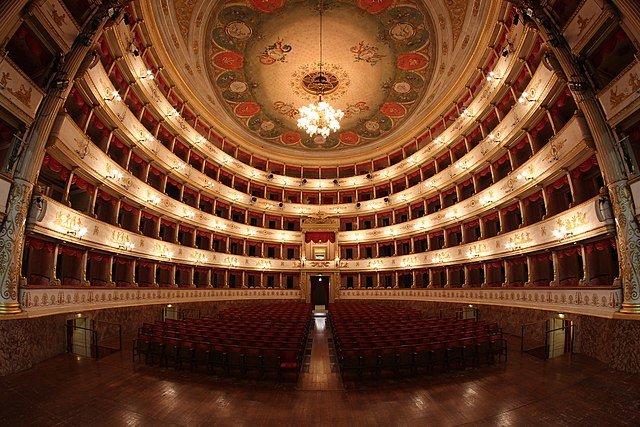 The Albinelli Market is one of the most beautiful market halls in Italy. The Marcato Albinelli has been here since 1931. Here you can buy a wide variety of products and food from the region of the Emilia-Romagna. You can buy everything from fruit and vegetables, meat, fish to the delicious pastry specialties of Italy. Surely you will find many products with the DOP and IGP labels that are worldwide famous for the Italian cuisine.

Not only the locals go shopping in the market hall, but also tourists are attracted by the daily hustle and bustle of the market. In addition to the countless food stalls, there are also restaurants where you can enjoy the culinary delights of the Emilia-Romagna region. 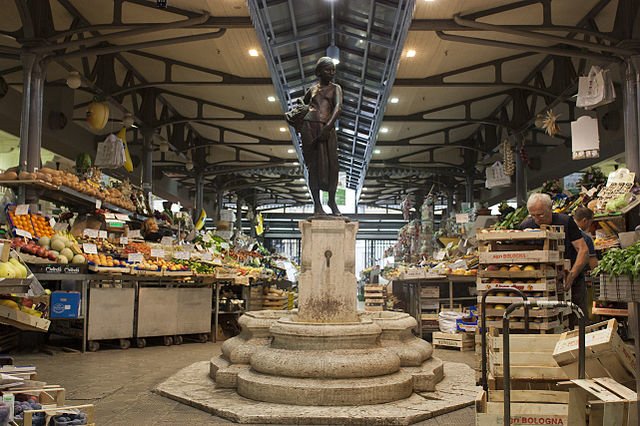 If you want to get to know and taste the black gold - as they say in Modena - you can visit various balsamic vinegar cellars. The tourist information office of the city keeps a list of vinegar wineries that are in the surrounding area of Modena who welcome visitors. In addition, balsamic vinegar guided tour and tasting can be booked. More information about the vinegar factories here. Balsamic vinegar sampling is also a part of the Modena Food Tour.

In Modena itself, in Piazza Grand you will find the Acetaia Comunale, a balsamic vinegar museum. Here you can learn more about the vinegar production. There is a tour guide who will guide you through the Balsamic Museum of Modena and explain every little detail. During the tour, you can also taste the vinegar. The museum is ridiculously cheap, and the entrance fee is only 2€. Tickets can also be bought online on the website of the Modena Tourist Office. Acetaia Comunale di Modena - VisitModena 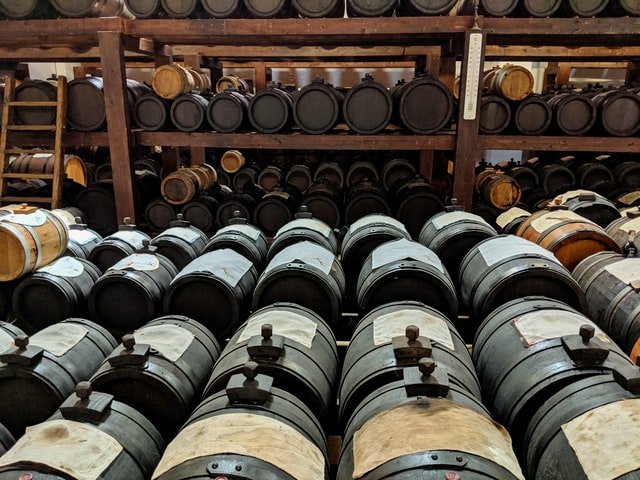 Photo by Nik's on Unsplash

Another impressive sight is the Palazzo Ducale. The Palazzo is located in Piazza Roma, a short walk from Piazza Grande. The Palazzo Ducale used to be a palace of the Este Family. The Duke Francesco I. has had built the Palace with its beautiful baroque facade in the 14th century. The palazzo now houses the Italian Military Academy of Modena and often hosts military events.

You can only visit the interior of the academy with a guided tour for which a reservation is necessary. The Tourist Office of Modena organizes these tours, but they only take place on weekends. Situated in the historic rooms of the Palazzo is the Museum of the Military Academy, which is also visited during the Palazzo Ducale Tour.
The ticket price is 10€. Further information on booking a guided tour of the Palazzo Ducale at the following link: DUCAL PALACE - MILITARY ACADEMY 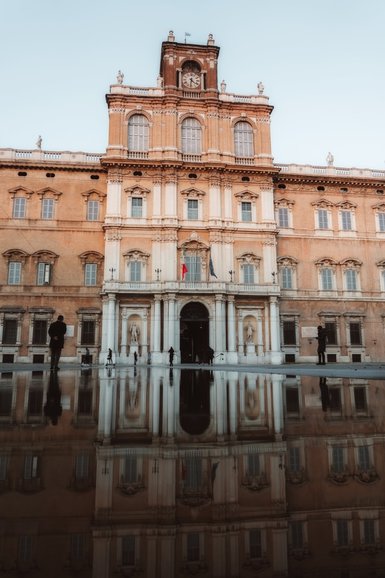 Photo by Michael Sala on Unsplash

The scrapbooks and Panini pictures have remained a childhood memory for many. The Panini Group produces stickers, trading cards, comics and is known for its Football World Cup sticker books. Giuseppe Panini, the founder of the company, collected with his brothers the small collectibles and created a unique collection.

In 1992, this private collection was donated to the city of Modena. Later, in 2006, the Museum della Figurina was opened and today you can visit this extraordinary collection. The stickers and trading cards depict a wide variety of topics such as sports, music, automotive and etc. But calendars or matchboxes are also part of the collection. The exhibition shows the collections in different years, from vintage prints to the 90s. And so, the museum can also take every adult back to childhood. 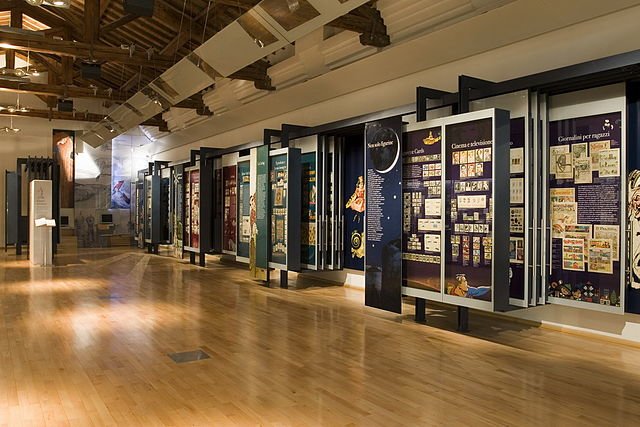 Modena is without a doubt a city with a significant history of the automotive industry and motorsport. And the Panini Motor Museum is an excellent place to get to know this history better. The exhibition houses a magnificent collection of historic vehicles. Umberto Panini, a member of the Panini family and the Panini Group, was a big classic car fan. The collection includes Maserati and other car brands, as well as motorcycles. The museum is located just outside Modena in Cittanova on a farm.

When I was around 21 years old, I worked and lived in Barcelona for a year. This international experience has shaped me interculturally very much and made me a cosmopolitan person. From then on I wanted to see the big wide world. This was followed by smaller city trips and larger tours across Europe. Over time, friends referred to me as a “globetrotter” and often asked me for advice when they were planning their vacation. My first significant travel experience was an Interrail tour, all by myself through Western Europe, when I graduated from high school. Not everything went as smoothly as I had imagined, but I made it home safe and sou... Read more