Tips for Driving in Ireland

Traveling through Ireland by car gave our family the freedom and flexibility to take in the breathtaking countryside views and explore ancient magical castles. While it can be a daunting, renting and driving a car in foreign country, with a little preparation, knowledge and understanding you and your family can explore all the Emerald Isle has to offer! Doing our research we found a startling fact, car rentals in Ireland cost more, WAY MORE at the counter of the airport than they do pre-booking in advance. Also brush up on your manual transmission skills, because In Ireland an automatic transmission comes with a premium price. Don’t worry the peddles though, they are set up the same way universally. Gas on the right, brake in the middle and clutch on the left. Also don’t overlook getting Diesel as opposed to Petrol vehicle, they get WAY better mileage and Diesel is regularly available. Exploring one of the many beaches along the North Atantic Ocean

Ahhh, the dreaded added insurance plans. Well, Ireland is one of the few places on earth that your personal insurance does not cover you. You are required to get basic insurance and then have the option to add on tire, glass and mirror insurance. While this may seem excessive, as you read on you will see why they each have a separate policy. We went with the FULL coverage, hubby joked with the counter attendant, that if we parked the car in the River Liffey or North Atlantic, as long as we brought back the keys and told them where they could recover the car, were good…right? They assured us we were fully covered, for pretty much anything that happened. We ended up not needing any of it, but the peace of mind was worth the money. YOU DON'T NEED A RENTAL CAR IN DUBLIN

While in Dublin, you don’t need a car, it would be a waste. Even a few day trips we took, we used the trains and it worked great. Once outside of the city, a car is the way to go. We loved seeing the country side, at our own pace. We planned what to see and when to see it. We avoided the major tourist spots, during peak times and took back county roads less traveled. Do be aware of tolls for using the express ways and entering back into Dublin and plan ahead. BEWARE OF THE LACK OF SIGNAGE AND NARROW ROADS

Being from Los Angeles and driving into the city everyday, my husband considers himself a savvy driver. But, Ireland is a whole other kettle of fish. Most streets are not marked and if they are, they have a name in Gaelic that no one could pronounce. Coupled with the fact that most of the “highways” were barely one lane way for both directions—it was interesting at times. Just take your time, and use a GPS unit. It will pay for itself in lost time. We used our iPhone with Google Maps downloaded. It worked like a charm, once of course we got use to estimating how far meters and kilometers were. Sharing the road is an art form in Ireland. You make eye contact with the approaching vehicle and a relationship, of who is going to pull on the shoulder, ditch or hedge and allow the other to pass is decided. Say a quick prayer and pass gingerly. Remember that part about the added insurance? A local told us they can tell who the tourists are because the rental cars are all missing mirrors, dragging branches or are missing hubcaps from going off the road. 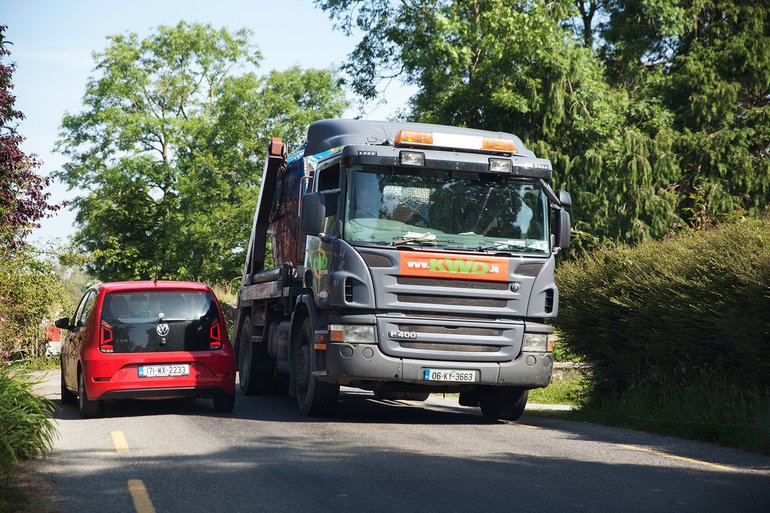 Scary encounter with a large truck

We rented a VW Passat Diesel (a full size of a car by Ireland standards) through Dooley Car Rentals. We had to accommodate four people and two large suitcases for almost two weeks of driving all around the island. The only advice we can give is, go as small as you can. When you get into cities, parking is where you make it. The one lane streets are small to begin with, then you have to pass parked cars and find a way to pull into a parking spot. Yes, the record was a 15 point turn to park one night. Trying to Park in Kinsale

If you plan out your trip well, you can avoid many of the fees and mistakes the tourists make and see Ireland’s stunning countryside!