A Coastal Hike along the Sussex Coast, England 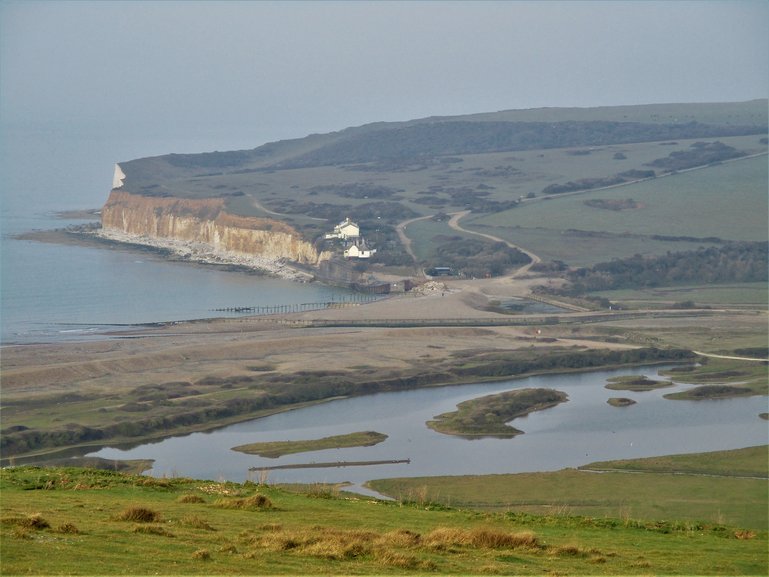 Still in lockdown in Eastbourne, we decided to hike a section of one of England's most scenic trails. The steep path from the west end of Eastbourne's promenade is the kick-off point for the 100-mile South Downs Way. The epic trail comes to an end at Winchester in Hampshire after crossing the entire of the South Downs National Park. The trail takes in some spectacular scenery including Beachy Head Lighthouse and the Seven Sisters cliffs. It continues through the English countryside over rolling hills, through forests and dipping into picturesque villages.

This part of the coast consists of a series of dramatic chalk cliffs. In fact, it is one of the longest stretches of undeveloped coastline on England's south coast. The valleys of Seven Sisters were carved into chalk in the ice age by meltwater. Every year, thirty or forty centimetres of the cliffs are eroded away by the the elements. We walked up and down the three miles of undulating grassy banks, enjoying the solitude and spectacular views of the sculpted white chalk cliffs and the sea below. It was fairly early in the morning and we only passed a couple of other people.

We stopped for a picnic breakfast at Brass Point, one of the ‘summits'. Indeed, each of the hills have their own names. In addition to Brass Point, there is Haven Brow, Short Brow, Rough Brow, Flagstaff Brow, Bailey's Hill and Went Hill. That morning we conquered them all! The area has, in fact, been used as a backdrop for several movies. These include Robin Hood: Prince of Thieves, Atonement and Harry Potter and the Goblet of Fire. Indeed, it's easy to understand why the striking landscape is a favourite spot for film producers. 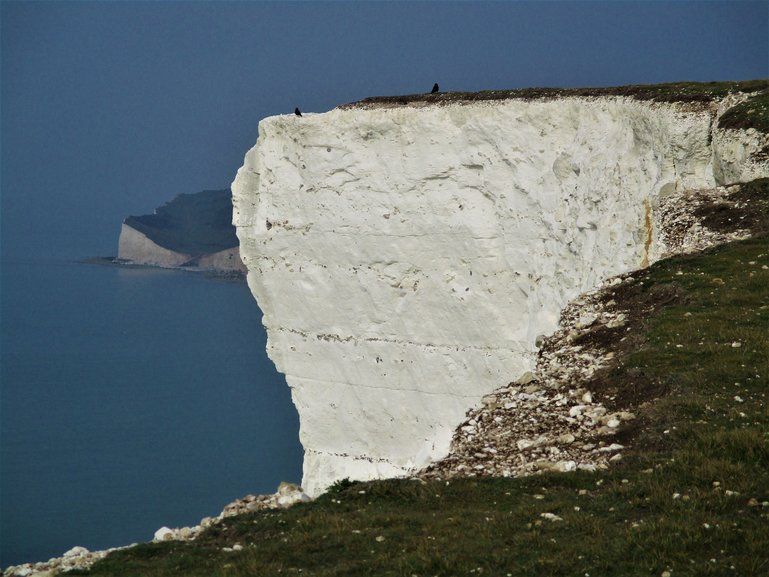 The first sign of civilisation came as we approached Birling Gap. The tiny hamlet perched on a cliff edge comprises of a cluster of cottages and a cafe. The beach at Birling Gap is mostly pebbles and when the tide goes out, there are an abundance of rock pools to explore. The cliffs here are also crumbling away and a cottage situated on the cliff edge had clearly been abandoned. All the way along the coastline, there are warnings not to tread too close to the edge in case the fragile chalk cliffs disintegrate underfoot.

From Birling Gap, it's possible to walk inland to the village of East Dean, around a mile away. The Tiger Inn, situated on the village green, is a popular 15th century watering hole. It's an ideal spot to enjoy some pub grub and a pint of Sussex ale. We, however, still had a way to go and returned to the coastal trail without lingering. (The pub is, in fact, presently closed due to lockdown, as is the cafe at Birling Gap). 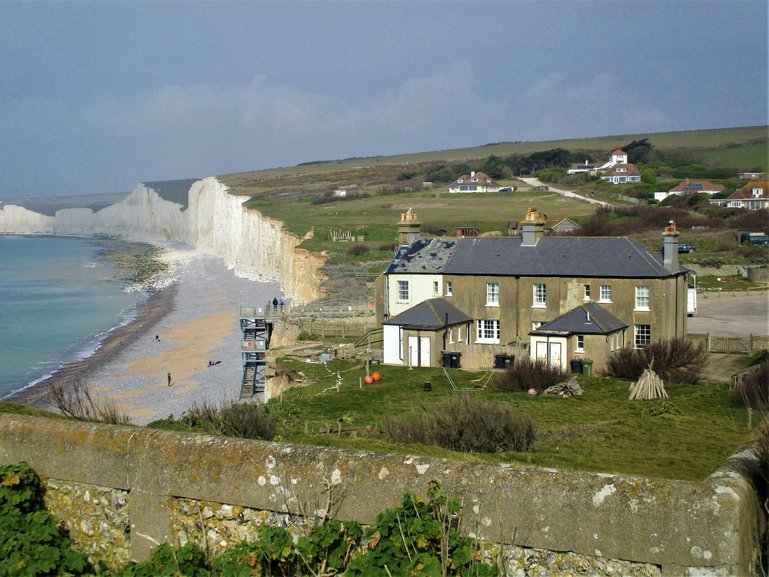 The next landmark that we came across was the Belle Tout Lighthouse. Built in 1832, it was decommissioned as a lighthouse in 1902. It has since been a tea shop, private home and is presently a hotel. Themed rooms include the Captain's Cabin, along with the Keeper's Loft, Old England, New England, Beach Hut and Shiraz. It has also appeared in many movies and TV shows including The Loves and Lives of a She Devil to the James Bond film, The Living Daylights. 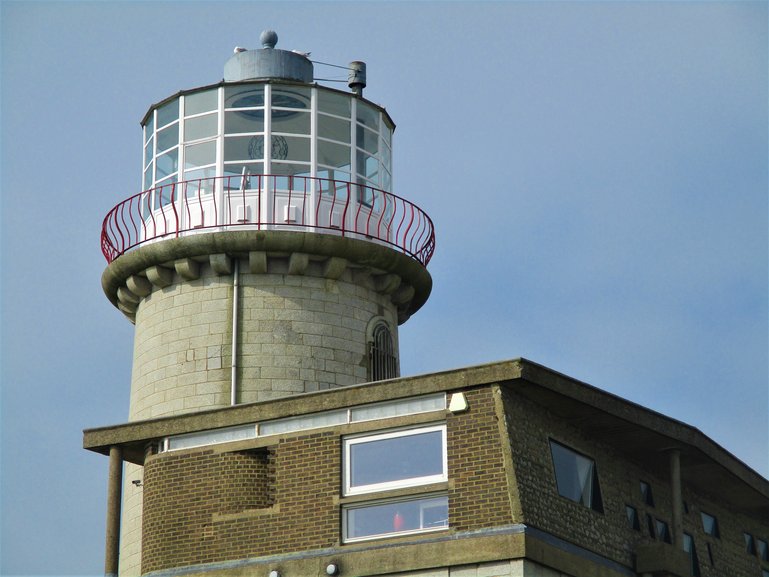 The final landmark on the trail is perhaps the most famous. In fact, Beachy Head is one of England's most well-known landmarks. Chalk cliffs, 530-foot high, dramatically overlook a red and white striped lighthouse. Due to ongoing wind erosion, the cliffs maintain a pure white appearance. Indeed, it's a spectacular spot and although it's a popular tourist attraction, there is also a dark side to Beachy Head. Since the 1600's, it has been a notorious spot for suicides. As a matter of fact, since 1965, over 500 people have taken their lives there. Some deaths have been accidental – people have lost their balance when posing for photographs too close to the edge, or stumbled when walking dangerously near the precipice. 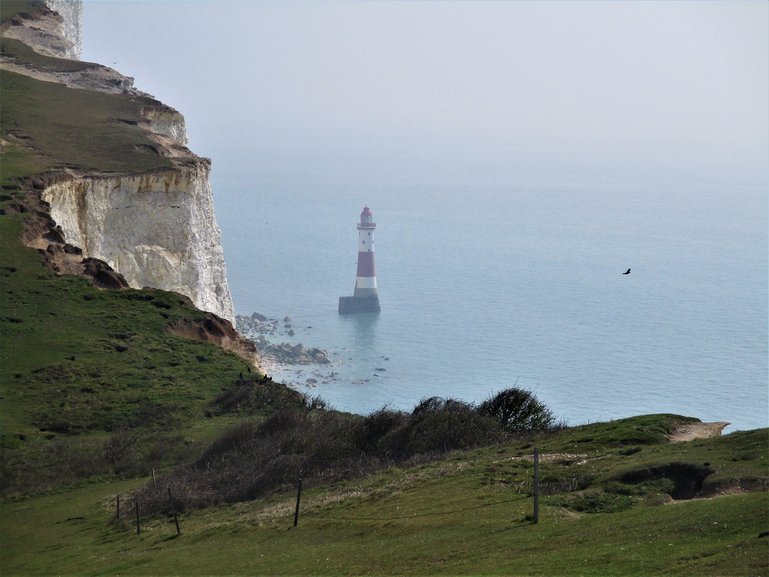 From Beachy Head, it took around half an hour to descend onto Eastbourne's elegant seafront. Passing the bandstand and pier, we walked the few remaining miles back to Langney Point. The entire route from Cuckmere Haven to Eastbourne was around thirteen miles, the most we had undertaken since we hiked the Norfolk Coastal Path last summer. The scenic route along the cliffs of the south coast was a thoroughly enjoyable hike and mildly challenging, yet manageable. In fact, it was delight to escape to the hills for the day and feel the sun on our faces after a chilly winter of lockdown. 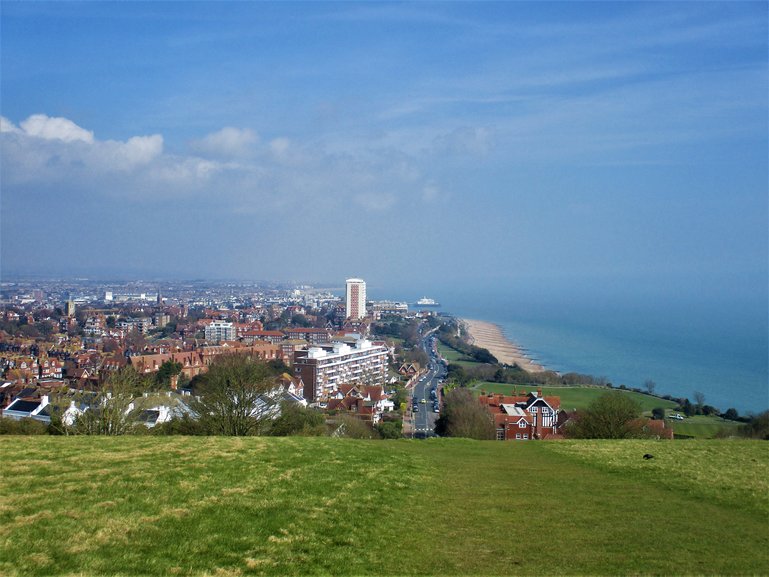