We had wanted to take a camping trip to Blackberry Wood, near to the village of Ditchling, for many years. Somehow the time had never been right. Whether it was work, housesitting or more recently, lockdown, there was always something to stop us. Until last week. With a few days to spare and some dry weather forecast, we decided that the time was right for our first mini adventure since lockdown. 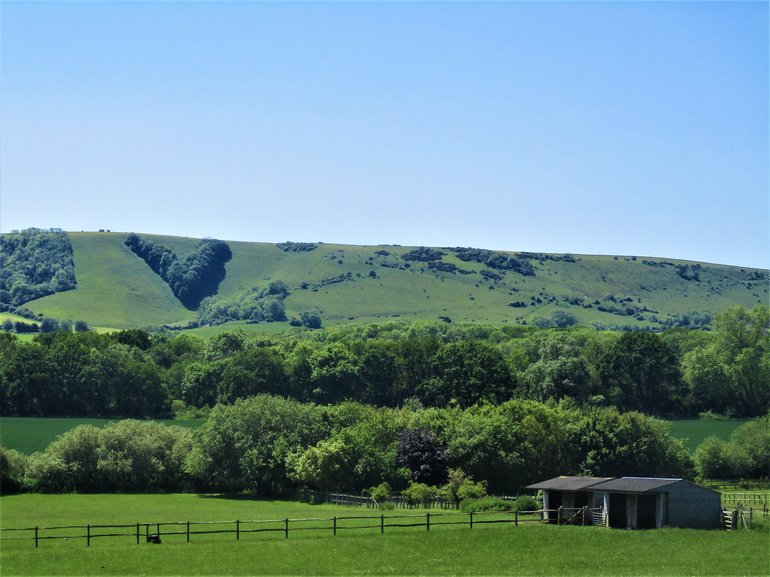 We took the train to Plumpton, the nearest railway station to the campsite. On alighting, we headed along a country road that skirts Plumpton racecourse. As we walked along, we could hear a woman's voice singing loudly in operatic style. Just as we were wondering where it was coming from, the protagonist appeared. Coming over the hill on a bicycle, she was still singing at the top of her voice, and waved at us as she went by.
After following a bridle way, we stopped in a churchyard which had views across the fields. There, we sat on a bench to enjoy our sandwiches before heading through a corn field to find Blackberry Wood.

No ordinary campsite, Blackberry Wood is divided into two sections. The first section offers a wide arrange of quirky accommodations that include two amazing, handcrafted tree houses named Higgledy and Piggledy. Other types of accomodation include a traditional gypsy caravan along with a red bus, helicopter, cosy cabin, curvy cabin, and an airstream trailer. 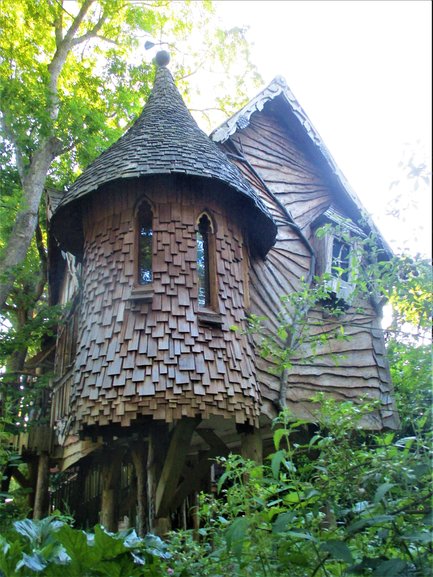 One of the Treehouses

The second section is a woodland site known as the Wild Side, which is where we were staying. Each of the twenty pitches has a large glade of its own, hidden in the rambling woods. Consequently, everyone has plenty of space and privacy. Each clearing has its own name – Wonky, Minty, Witchwood and Sirius among them. Ours was called Mecca – a perfect spot with a gap between the trees and views of a neighbouring field. 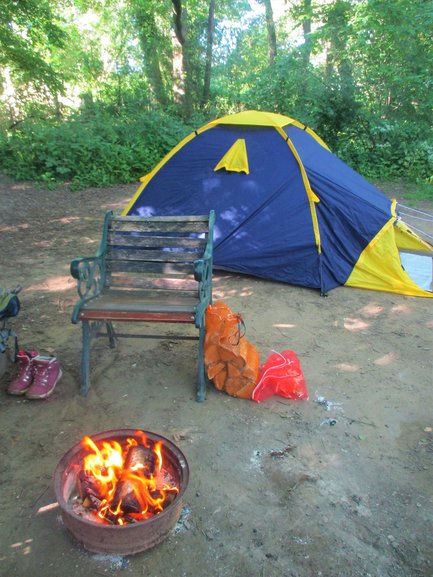 There were a couple of chairs and a wooden bench, as well as a fire pit with a grill. In contrast to regular campsites, campers are actually encouraged to have fires. Firewood and BBQ coals can be purchased at the small store, which also sells local beers, wine, locally sourced burgers, sausages and other necessities. At weekends, food trucks often visit the site offering such temptations as pizza or Thai food.

Having pitched our tent, we went to investigate the pathways which meandered through the woods. The paths had intriguing names such as Twisty Trail and Acorn Alley. There was a cute wooden bridge crossing a stream and other features such tree stumps with flowers painted on them. We also came across an occasional sculpture in the form of a gargoyle perched high in a tree or an elf hidden in the undergrowth.

The glades differed in size and all had a form of basic seating (tree trunks in some cases) and a fire pit. At the far end of the woods, there was a hidden rustic playground for kids with a small climbing wall. It all blended into the landscape perfectly. The toilet and shower buildings were beautifully hand crafted with wood, as well as being clean and well-maintained.

We spent two days at Blackberry Wood, enjoying the tranquillity of the rural surroundings and the sound of birdsong. Robins and blackbirds visited our glade and at night we also heard the hooting of owls. We saw such woodland creatures as rabbits along with field mice and squirrels. Music isn't allowed at Blackberry Wood, encouraging campers to enjoy the sound of the natural environment. Evenings were pure bliss when we sat by a roaring fire drinking wine and communing with nature, before crawling into our tent.

We walked to the nearby village of Ditchling via country lanes, woods and a bridle path. There, we had breakfast at The Green Welly, an excellent café with a lovely courtyard. Most of our time, however, was spent in our personal glade, making the most of our time in magical Blackberry wood.

There are a wide variety of walks around Blackberry Wood, with country lanes, trails and bridle paths galore to explore. A few miles away, Ditchling Beacon is the third highest point of the South Downs and has 360-degree views of the English Channel and surrounding countryside. Ditchling is a 45-minute walk away and there's a café, tearoom and a handful of pubs in the village.

The seaside metropolis of Brighton is only eight miles away and the ancient town of Lewes is about five miles away.

The Jolly Sportsman – A 40-minute walk along a farm track, this pub serves high-end pub grub and has a lovely garden.

The Half Moon – A 40-minute walk across fields and through woods, this pub serves food and additionally has a BBQ on summer weekends in the garden.

The Fountain Inn – Located on Plumpton Green (near Plumpton Station) about 40-minutes away, this traditional pub serves bar good value snacks throughout the day and food during the evening.

The Bull – A long established Ditchling establishment, The Bull serves food and has a garden.

How to get to Blackberry Wood

By train: We took the train (the London Victoria line) to the nearest station, which is Plumpton. From there it is a 40-minute walk along a bridle path at the rear of the racetrack. At Streat Lane you take a left and Blackberry Wood can be found a little further along on the left. The other alternative is to take a train to Hassocks Railway Station and then take a taxi (which will cost about £12.00 – £15.00). 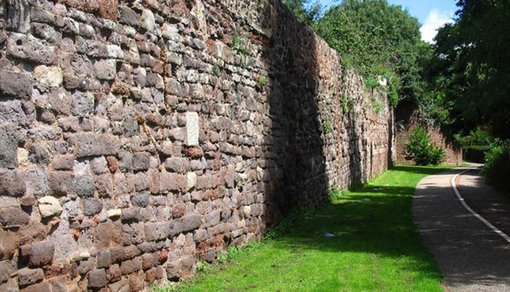