10 charming places you must see in Montmartre 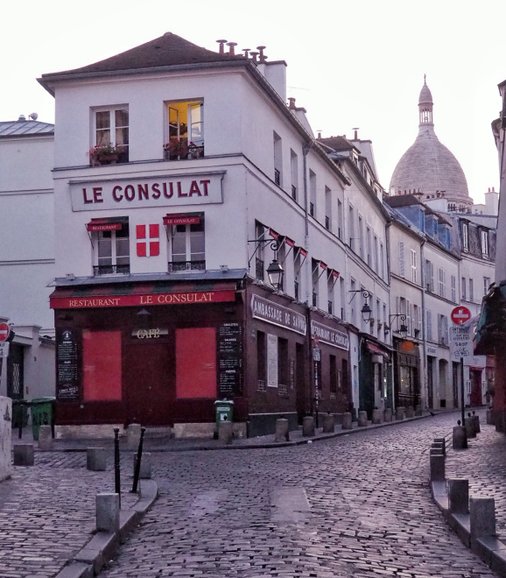 It's not hard to fall in love with Montmartre’s charm. Once a village outside of Paris, Montmartre became the city’s 18th arrondissement in 1860. Despite this it does retain a village feel like nowhere else in Paris. From cobbled streets to ivy clad buildings there is so much to become enchanted by.

At its heart is the magnificent Sacré-Cœur church with streets winding away to the west, hiding secrets of artists past. Montmartre has been home to many famous painters and artists, especially in the early 20th century. They were inspired by its beauty and drank and conversed in its cafes and restaurants. The artistic spirit can certainly still be found in souvenir shops, in the street art stalls and on the walls!

Check out these 10 charming places to soak up the Montmartre atmosphere! 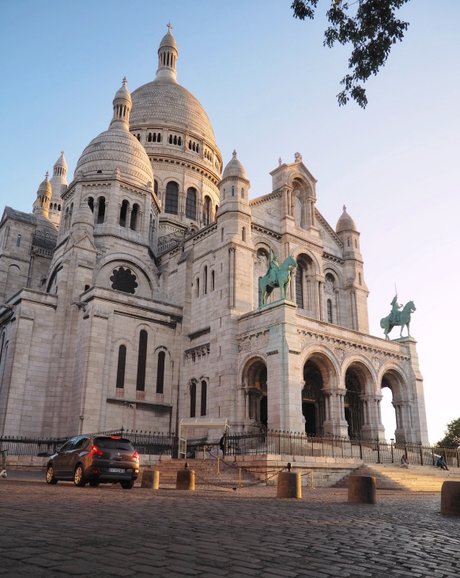 At the very top of Montmartre and surveying the city sprawling beneath it sits the Sacré-Cœur Basilica – meaning Sacred Heart. A comparatively modern church, it is the second highest point in Paris, the Eiffel Tower of course being the first. Externally it is both unusual and enchanting with its multiple swirling domes and stark white bricks. It is a wonderful place to come at sunrise as the early light casts a golden glow over the Basilica. 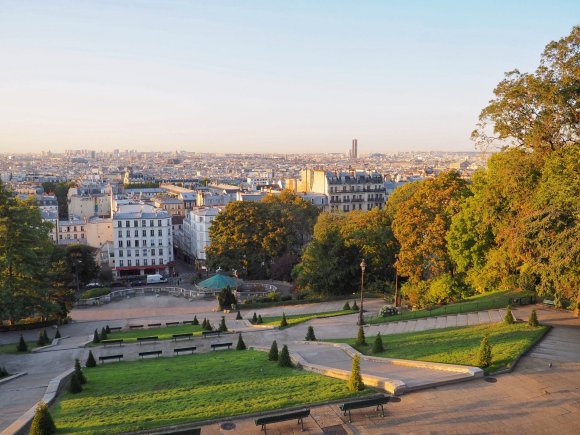 Outside the Sacré-Cœur there is a stunning view over the gardens of Square Louise-Michel and the rooftops of Paris. In September it is made all the more gorgeous by the trees turning shades of Autumn.

La Maison Rose is my most favourite place in the whole of Paris, not just Montmartre. A cobbled pavement, slender lamp posts, the most perfect pink coloured walls and a tangle of ivy changing colour with the season. I had seen so many photos of this perfect Parisian cafe and I couldn’t have imagined the excitement I felt when we turned the corner to come face to face with it and nobody else in sight in the early morning light. 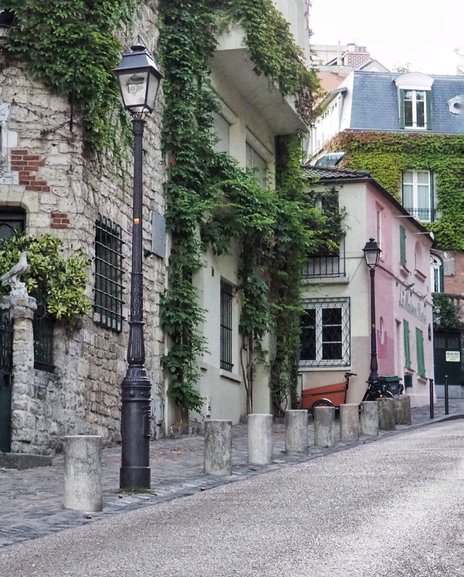 You can find La Maison Rose on the corner of Rue de l’Abreuvoir. Make sure to walk down the street past it and admire the view back up the road as well. You should be able to catch sight of the dome of the Sacré-Cœur peeping over the tops of the buildings.

There’s been a restaurant in this spot for over one hundred years and has been visited by Picasso and the like. And ok yes, I may have specifically colour co-ordinated my shoes and
skirt to match… It works though right! 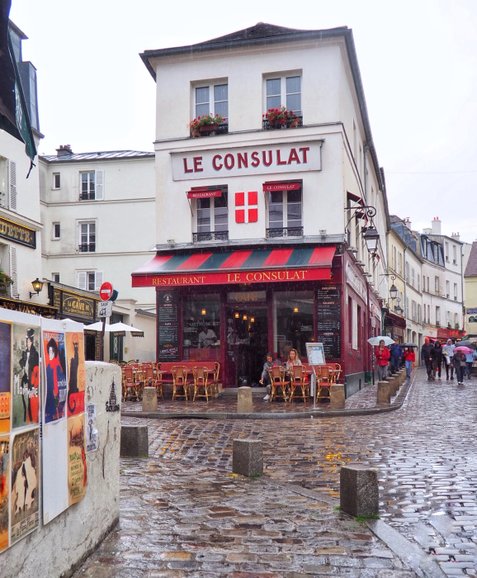 The cobbled streets of Montmartre help retain its village feel and are just as charming whether the sun is shining down or you’re huddled under an umbrella. There is an incredibly Parisian feel to the perfect postcard image of Le Consulat, a cafe was popular with many of the artists that lived in Montmartre.

For a clear photo of this classic Montmartre restaurant, come early in the morning. As the sun rises it casts a pink glow down the street and onto the dome of the Sacré-Cœur in the background.

4. View from the Sacré-Cœur

Of course you can visit the inside of the beautiful Sacré-Cœur but you can also climb all the way to the dome for impressive views across Paris. It’s 100% worth the entrance fee and the 300 steps it takes to get to the top. As you queue and enter through the gate to the left of the entrance to the basilica, keep left to go down the steps to find the way to pay and go up the dome. 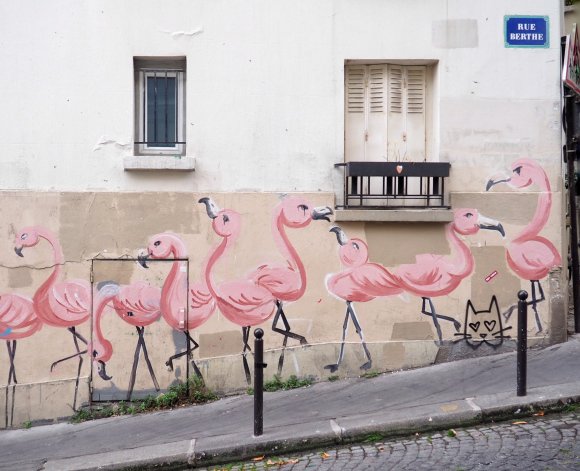 Make sure you allow plenty of time to walk the streets of Montmartre and you will discover plenty of street art along the way. My favourite piece is this one at the corner of Rue Berthe with Rue Ravignan. Take a photo walking alongside the strutting pink flamingos. 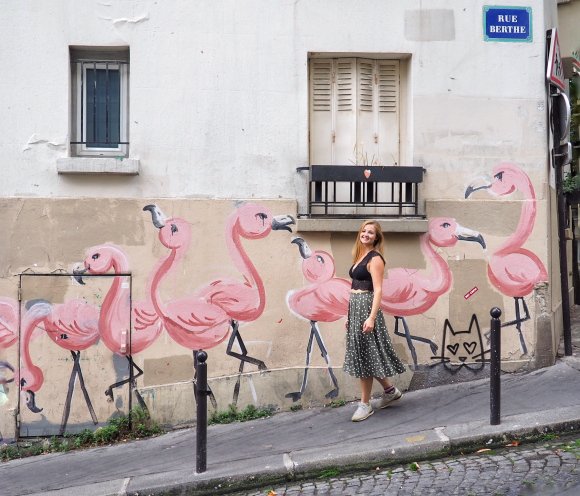 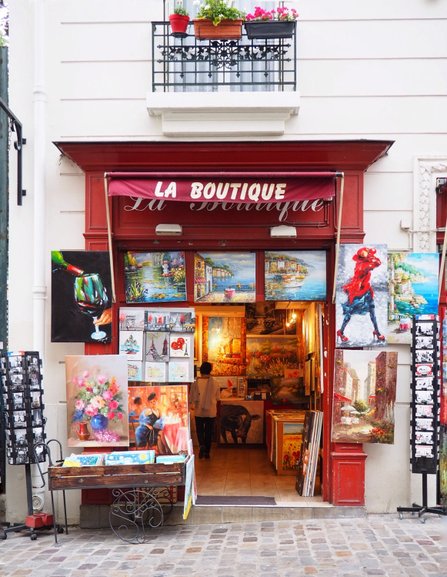 There are lots of beautiful shops and cafes in Montmartre but La Boutique stands out because of its deep red awning and the gorgeous paintings that frame its exterior. Montmartre is synonymous with impressionist artists as many of the most famous lived and worked here during the Belle Epoque. The rents were considerably lower in Montmartre than in Paris. Plus Montmartre, still a village at this time, was exempt from the Paris wine tax!

When Montmartre was a village outside of Paris, it had a number of windmills occupying space on its hill. Today only two of these remain, one of which is called Moulin de la Galette which this cafe takes its name from. The windmills were an integral part of life in Montmartre. 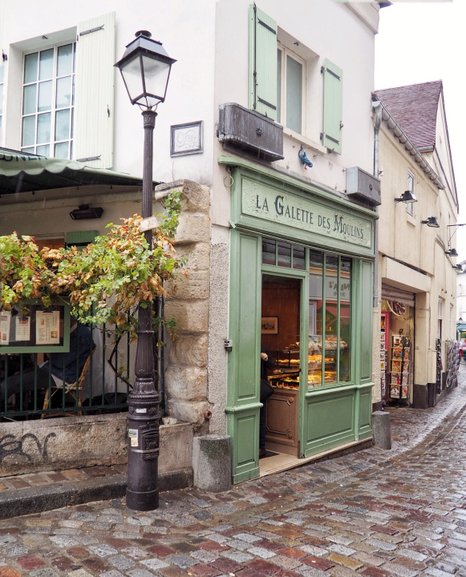 I love this gorgeous cafe with a perfectly positioned lamp post, pigeons in the street and the classic cobbled pavement! 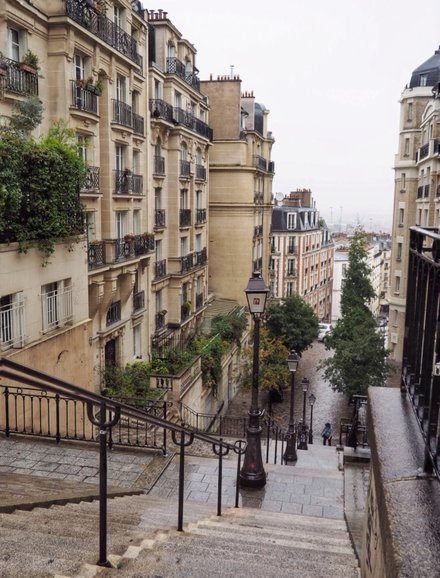 Montmartre is set on a hill of the same name which at its height is 130m, by the Sacré-Cœur. There are plenty of steep streets and stairs to climb up and stretch those leg muscles but it is certainly worth it! The stairs at Rue du Mont Cenis give an extended view to the North of Paris and it’s incredible how quickly they cleared when the heavens opened!
Top Tip: when the rain begins in Montmartre then use it as the perfect opportunity to duck into a cafe or bar for a bite to eat, a steaming coffee or a crisp glass of wine. I had the most delicious melty raclette baguette from Grenoilles.

9. The Carousel and Square Louise-Michel 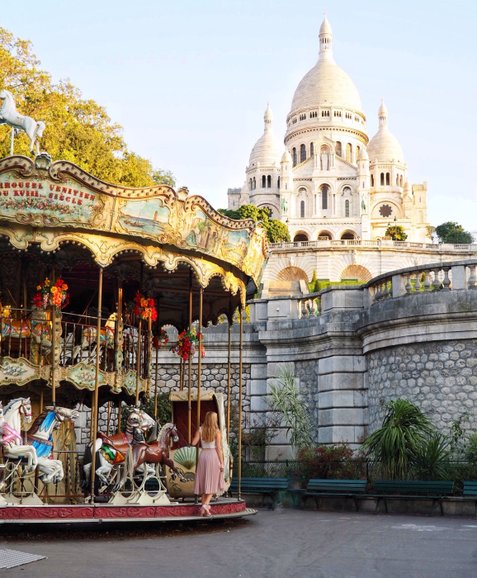 Just beneath the Sacré-Cœur is a garden called Square Louise-Michel. From Place Saint-Pierre you can either walk up through the gardens to the basilica or take the funicular that runs parallel to the gardens.

There are lots of carousels throughout Paris, usually located next to famous tourist attractions such as at the Eiffel Tower! One of these charming carousels is in the gardens which makes a lovely photo opportunity. 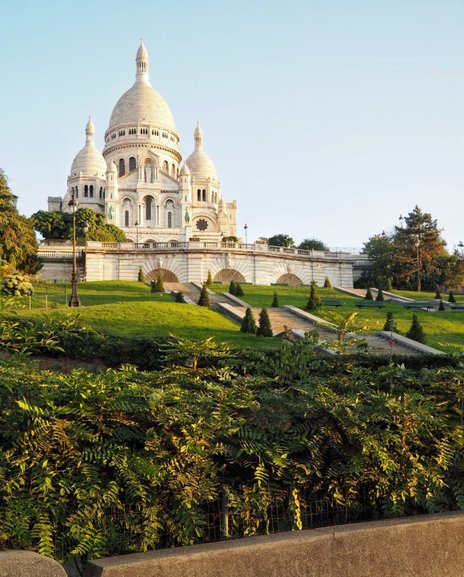 You may be wondering how I’ve managed to get a photo of the gardens so quiet since they aren’t actually open early in the morning or late at night… Well, funny story. We accidentally got locked inside before they had properly opened. Oops. A gate at the top of the gardens was ajar so I asked the cleaner who was sweeping if they were open yet and he ushered us in. I don’t really know why he did that because they definitely were not open and he definitely proceeded to lock the gate behind us. It was the most perfect opportunity to take some amazing photos with plenty of people looking on from the gates wondering how we were inside…!

In the early 20th century, Montmartre was an artists haven and everyone from Van Gogh to Renoir to Picasso has spent time living and painting here. The artistic influence still remains and today there are many street artists with their easels and stalls set up in between the cafes and restaurants of Place du Tertre. It is alleged that there is a ten year waiting list to be approved to have a space here!

Hey! I'm Cat, a Scot living in Yorkshire. I work 9-5 but make the most of weekends and annual leave to sneak in as many city breaks and explorations as I can! 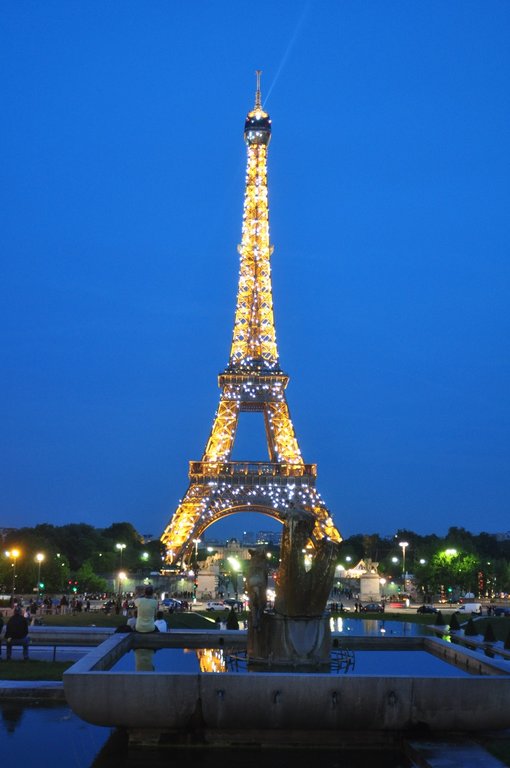