The thing about being women of a certain age is that we can get a little bit tired. Pip and I have been back at work for two weeks now and we've both had the busiest January ever. This, coupled with Pip's refurbishment activities after the biblical flood and my Ever Patient Husband's brand new interest in hill walking means that we've both been very physically active in recent weeks.

Today, for example, Pip was woken up early with the prospect of plasterers knocking on her door at eight thirty am and making her living room ceiling smooth and lovely again. She's also been running around with Farrow and Ball paint samples and getting them 'colour matched' at B&Q which resulted in her comment about having to sit down with a cup of tea and attempt to remember how old she is.

When I explained to her helpfully, after I'd woken up from my late afternoon nap, that she was 26 and it was August, she seemed quite cheerful again and returned to selecting soft furnishings to match her newly chosen paint.

This is all a very round about way of saying that whilst it is officially Pip's turn to write the blog, I am womanfully stepping up to the plate and bashing out some killer prose. This sounds relatively simple reader, but when you add in the heady mix of EPH and his other new found skill, that of cooking, I am interrupted with a stream of inane questions about duck breast in plum sauce.

It's very hard to write killer prose when someone is asking you about plums, Savoy cabbage of whether he should double the recipe because it says its only for two and there are four of us. For fuck's sake!

He is like an excited kitten with a new ball of wool. After thirty years of cooking for the family and trying to think of interesting an nutritious things to serve them that aren't Spag Bol every night, I cannot share in his enthusiasm. The upside is, that he's on a very important errand to Waitrose to attempt to purchase plums, which as I have explained aren't in season right now, so good luck with that one. I anticipate a call any moment.....

Back to walking and those hills with snow.

Last weekend, EPH got up early, packed yet another rucksack and returned to The Pentland Hills to finally walk the three hills we'd tried to do the weekend before and that Pip and I had failed to do last November. 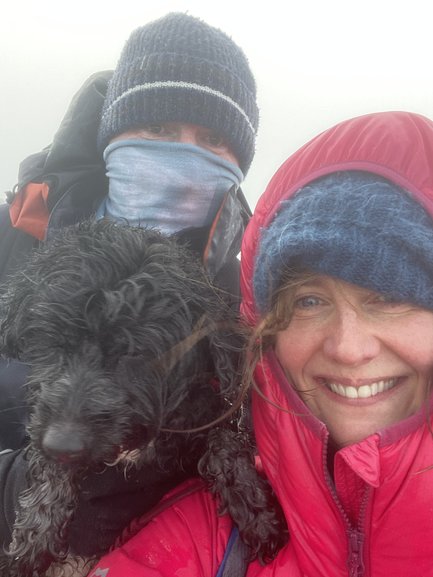 Me (Bec), Ever Patient Husband and Eddie

There are in fact, quite a number of hills in The Pentland range; West Kip, East Kip, Scald Law, Carnethy Hill and Turnhouse Hill being the most obvious ones as they sit in a neat row, overlooking Edinburgh in quite a protective manner. EPH and I had resolved to walk the first three and armed with our map that we think we now understand, off we went.

The snow had turned to lethal ice and was literally everywhere. The cloud was low, the wind was bitingly cold and as we ascended the first hill, we realised we could neither see where we were going or find the path.

There was quite a tense moment as we stood at the top of West Kip in a gale force wind at the edge of a precipice with the dog who really wasn't happy and we lost the path. Not only did we lose the path, but we also lost sight of the young couple we'd be secretly following as we felt they probably knew things we didn't about which way to go. EPH‘s tone was a little terse whilst I remained my usual optimistic self. How hard can it be to get down from a hill once you're up it?

As it happens it was quite tricky.

We found ourselves clambering up deep heather, following the footprints of what I thought might be a size six walking boot and therefore concluded may belong to the young woman part of the couple we'd been secretly tracking.

EPH and Eddie were finding their own way through the heather and I think we were all hopeful that some kind of path would appear at the top of this climb.

Reader, it did not. There was no path, just more heather and seemingly endless amounts of hill. EPH starting muttering about things getting dangerous now so I suggested we turn back. This was met with stony silence and so we continued.

Eddie really doesn't like hill walking in wind and rain when we're lost. He picks up on the panic vibe and thinks we're all going to die. I, on the other hand, have thought through the consequences of being a bit lost and carefully calculated how to ration the sandwiches, tea and tangerines to keep us going whilst we await rescue by helicopter.

What goes up, must come down and the path appeared over a mound of yet more heather. We celebrated by eating a sandwich each and sipping some luke warm tea before heading off to tackle the next hill. 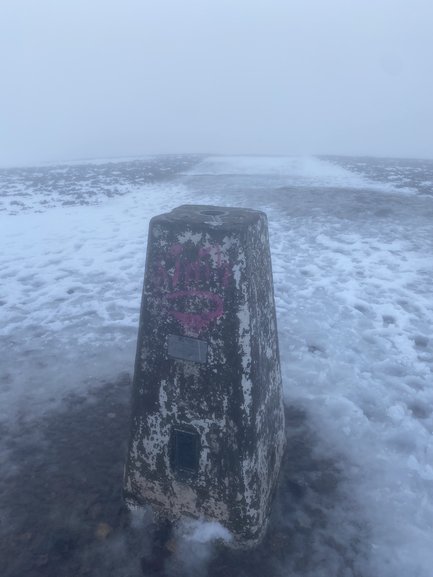 Proof we made it to the top, although you can’t see anything

The people you meet out walking, even on a terribly inclement day like last Sunday, are really rather lovely. They stop and chat at a safe distance and we remark on things like weather and the slippery nature of sheets and sheets of ice. Most of these walkers have poles and I notice, cleats for their walking boots. I made a note and resolved to purchase some from Amazon if we made it back in one piece. I mentioned this to EPH who scoffed at the very idea of having metal cleats on your boots so you didn't break your neck on the ice.

As we gingerly descended the third and final hill, feeling a bit smug with ourselves that we weren't dead, EPH very helpfully showed me how to walk down hill. Apparently, I have been unable to walk down hill without his careful instruction for forty eight years or so and required an intervention to prevent me from walking incorrectly downhill in the future.

It seems that one must walk sideways, particularly when one finds oneself in icy conditions.

I sighed deeply and very carefully explained that I knew how to walk downhill... (my mobile phone has just rung and EPH needs help preparing the duck breast because, and I quote, ‘time is getting on' - shouldn't have spent an hour in the fucking bath then should you when you know you've got dinner to prepare is what I wanted to say, but instead said ‘I'll do it when I've finished the blog' another Oscar please!)

....and that I'd actually been walking down hills since I was about two and managed really quite well.

EPH seemed a bit put out that his mansplaning had fallen on deaf ears.

He attempted to share his walking down hill expertise with our twelve year old daughter the following evening who unsurprisingly told him that she knew how to walk down hills and had been doing it for quite some time rather successfully. The deep sarcasm in her voice was impressive. That's my girl.

Nine miles later, with achy limbs and frozen fingers, we made it back to the car. The hills had finally been conquered and what that means for Pip is that I know exactly where to park and how to access the hills. There is no excuse anymore!

Plus, the nice man Gavin who organises the Nepal trip says we should be going in September on some kind of Snow Leopard themed expedition with an actual author who has written a proper travel guide. Pip and I may just remain silent on our blogging escapades for fear of developing a travel writing inferiority complex. 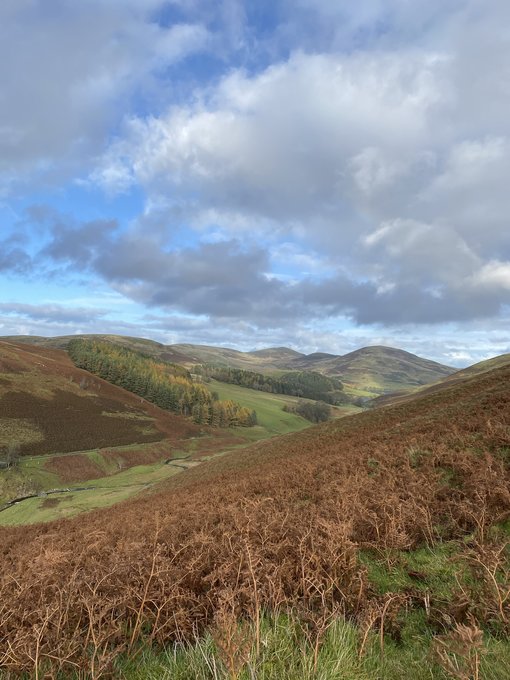 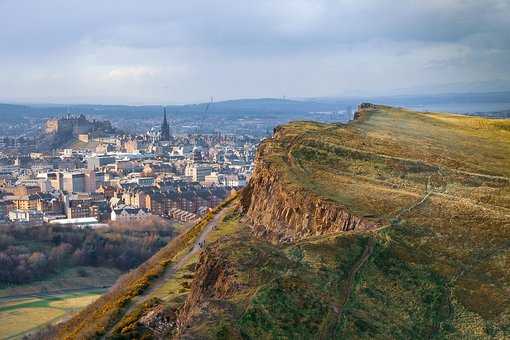