Being the Highest Mountain in Africa, the Mountain has been nicknamed as the roof of Africa. The Mountain can be approached via 5 different routes which are Marangu, Machame, Umbwe, Rongai and Lemosho Route, These are the Five ascending routes while the descending routes are Marangu and Mweka Routes whereby Marangu is used by the climbers from Marangu and Rongai ascending routes while the rest three routes uses Mweka Route for Descending from the Uhuru Peak, this makes the people to meet at some points and makes the Climb not boring and friendly.

Lemosho is one of the Kilimanjaro ascending routes. It is considered to be the scenic trekking route on Kilimanjaro, granting panoramic view on various sides of the mountain. Being one of the newest routes, Lemosho can be one of the best choice approaching the Uhuru peak. The route has been preferred by most climber due to it being uncrowded, the beautiful scenery and a high summit success rate. The route Give climber the high rate of the summit success because of it having plenty time for Acclimatization hence climbers will not meet the hustle of the altitude changes.

The Uhuru Peak a sucess summit 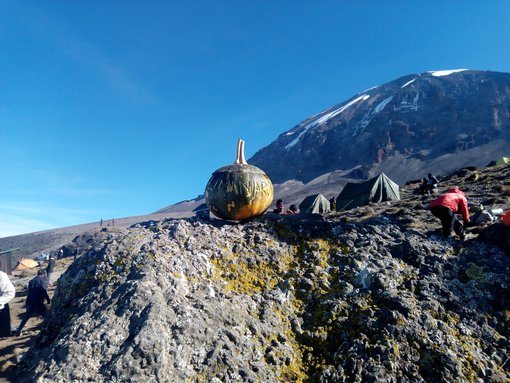 All our 9 Days Tanzania Camping Safari is a little is similar to the 7 days camping safari in Tanzania but has an extended day in the Tarangire national park taking you to all the popular national parks in Northern Tanzania as Lake Manyara-Serengeti-Lake Eyasi and Ngorongoro Crater.

The Marangu route is also referred to as the "Coca-Cola" route, as it is considered to be the easiest path on the mountain, given its gradual slope and direct path. It is the oldest and the most well established route on the Kilimanjaro. This is the only route which offers sleeping huts in dormitory style.