Kanazawa is a city of almost half a million inhabitants located on the west coast of Japan, located between the Sea of Japan and the Japanese Alps. Immerse yourself in the streets of its old neighborhoods is to go back to the time of the samurai and geishas, with a huge castle and gardens, which are among the most beautiful in Japan.

We can reach both Tokyo and Kyoto in the multiple Shinkansen (bullet trains) that circulate daily and at various times. As we leave the Kanazawa station, the first thing we find is an immense futuristic tori and an immense glass roof, which make up the entrance to the station, making it the first tourist visit of the city, La Puerta Sagrada, by itself. (Tsuzumi-mi) that's what it's called has become one of Kanazawa's symbols. It is an immense tori, as if it were a temple entrance, which was not without controversy before its inauguration in 2005. Between the huge wooden door and the street, we find another curious element, a digital clock. water, a fountain with multiple jets that goes combining the Welcome with the time, all formed with the jets of water, very curious. 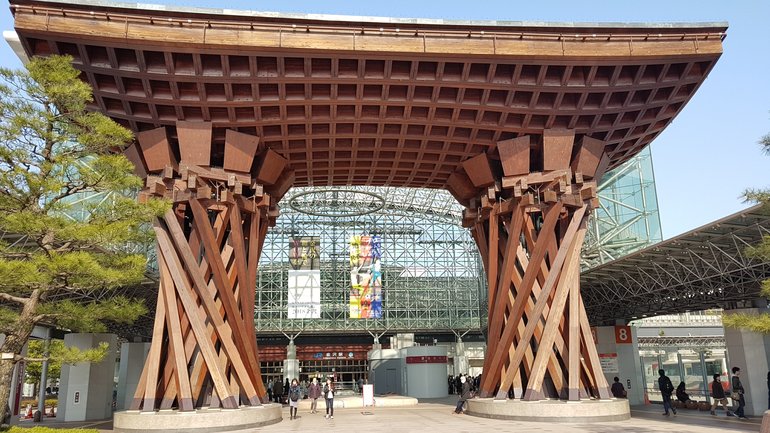 Due to its immensity it has had multiple uses, it was army barracks during the Second World War and later it was a university campus, nowadays it is an immense park and several visitable estancias, some of them for a fee, the venue is free, is an important tourist attraction in the city of Kanazawa The castle is huge and a curiosity is that roofs are made with lead tiles, so at times when it was besieged by enemy troops they could dismount and after melting them turn them into a munition.

If there is something that alone is worth visiting Kanazawa, this is undoubtedly the Kenrokuen, a huge Japanese garden, located in front of the Kanazawa castle, not in vain was the garden of the feudal lords and one of the most beautiful in Japan. .
It has several ponds and multiple paths full of flowers and trees, one of the curiosities of the garden are the Yukitsuris (hanging the snow) in November every year the branches of the pine trees are protected with cone-shaped ropes that help the branches do not break due to the weight of the snow. 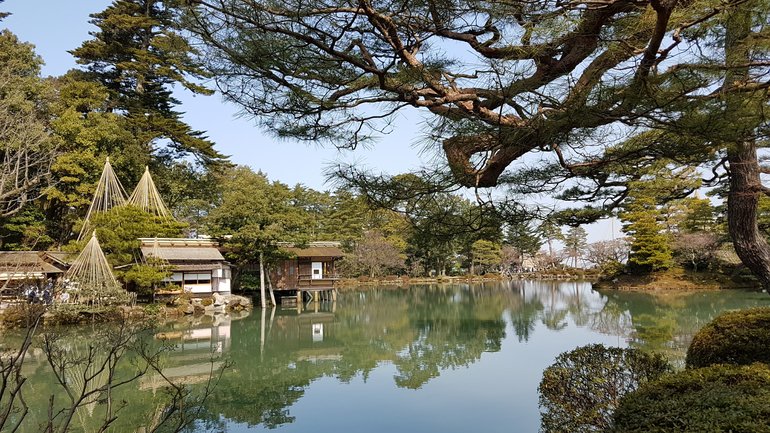 Wakita Naokata, vassal in the Kaga Clan, began to design and build the garden in the mid-seventeenth century, is a small garden very careful, but the most interesting is that prior reservation we can enjoy an authentic tea ceremony, which is true that we will find cheaper in many places in Japan, this apart from being the oldest tea house in Kanazawa, thanks to the explanations of the hostess will make us live a different experience and better understand what the tea ceremony means. 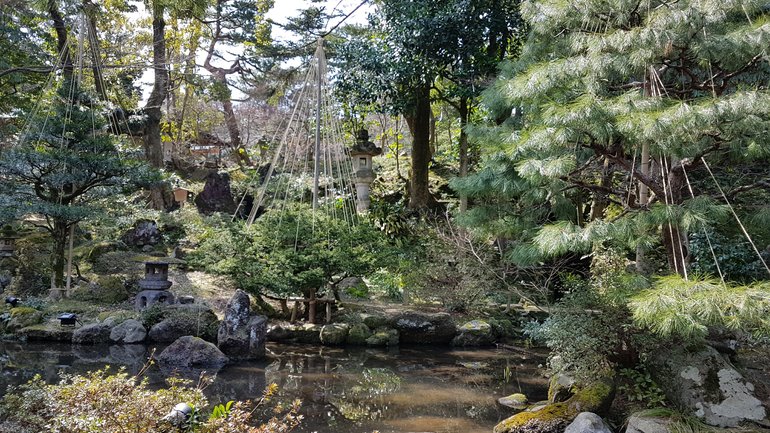 Higashi chaya (ひ が し 茶屋) It is a neighborhood that is characterized by its traditional architectural style of the Edo period, and for being a place where the geishas lived, although it is not as well known as those of Kyoto, it has a different charm and deserves worth missing for its narrow streets.
The wooden facades, as well as the glazed viewpoints on the second floor are characteristic of this neighborhood.

Omicho Market, is a typical food market of Japan is not the best that we can visit in Japan, but it is an interesting visit to complete the trip to Kanazawa and take the opportunity to taste some of the many products that we they offer.