With what feels like the flicker of light, a fleeting sweep of fabric and a quick jig of joy, this year has ended. I can’t say whether it is the end of the year or the beginning of a new decade for my reflective mood. But either way, I find myself thinking about belonging, authenticity and natural identity. One place that boldly claims its authentic culture and has preserved its heritage is Cinque Terre!

Cinque Terre is a beautiful, meandering land of centuries-old seaside villages on the rugged Italian Riviera coastline. Translated as Five Lands, Cinque Terre is the iconic five fishing villages. They are home to colourful houses clinging to steep cliffs, harbours filled with gently swaying fishing boats and crystal blue waters. All of these delights unashamedly claim Cinque Terre’s past. In doing so, they boast of its authenticity and rich cultural traditions. There is so much to love about Cinque Terre. From intoxicating hiking experience, seafood specialities, sweeping sea vistas to its historic legacy; What more can a person ask for? 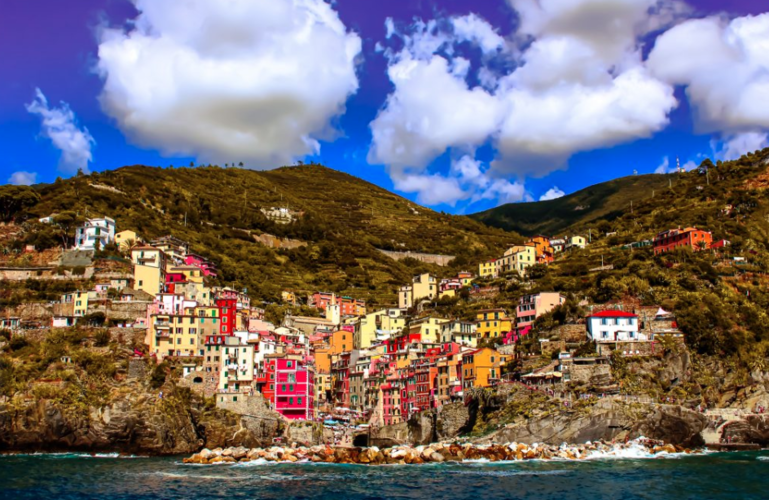 This beloved area was first inhabited in the Bronze Age and its strategic coastline later played an important role in the Roman Empire. However, after the Saracens occupied the region in the 9th century, the locals created the Cinque Terre that now exists by starting the heroic work that we still see and admire today. 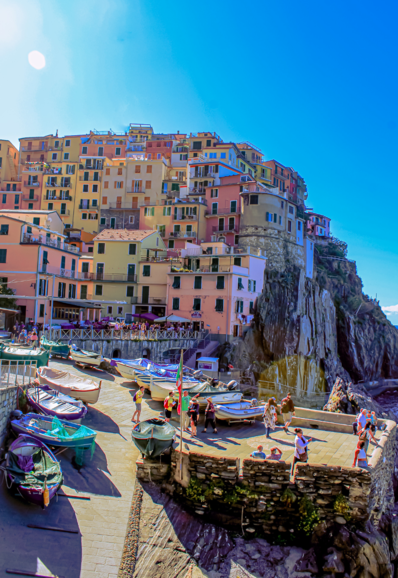 They turned the natural forests and rough, steep slopes into green sweeping terraces, built dry stone walls and planted vines while simultaneously utilising the sea for commerce. With a somewhat timeless elegance and charming persona, Cinque Terre still upholds these cultural traditions, meaning it privileges visitors with much more than the Italian sun and sea. Visitors are privileged with a glance into authentic Italy and Italian lifestyle that is centred on fish, olives and grapes! 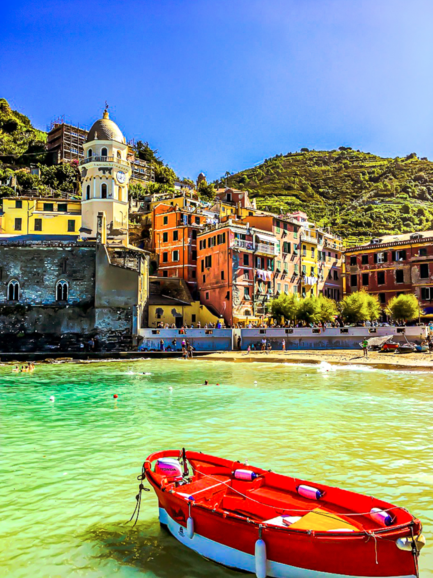 Despite the hordes of tourists that flock here each year, there’s still a feeling of originality to these fishing communities. Today, each village is a variation on the same theme; natural isolation and heritage. For me, this authenticity stems from the traffic-free environment that their profound isolation creates. Historically, Cinque Terre was cut off from the rest of the region, meaning they’ve been divorced from the rise of transport and technology. While of course both caught up to them, the locals today still prevent vehicles from entering the region. Nowhere else can a unique mixture of Italian culture and nature surround you with not a car in sight! 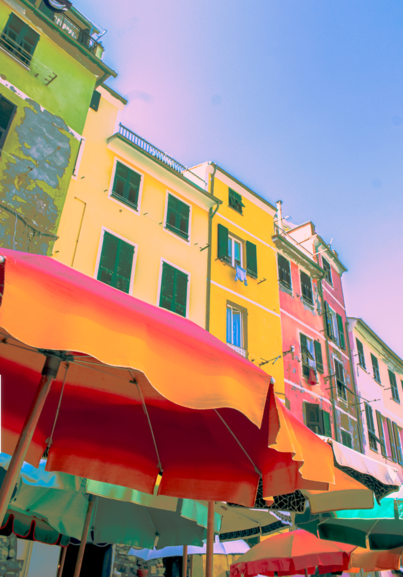 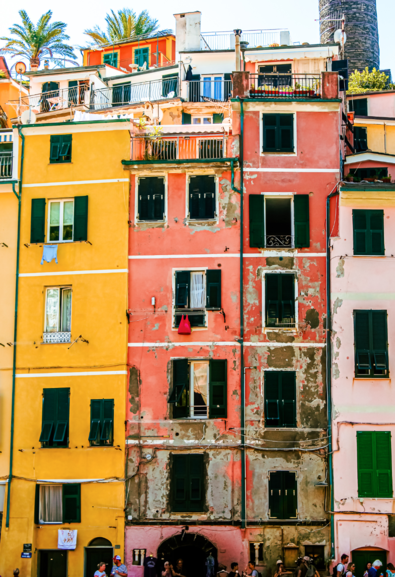 The people of these towns are proud of this heritage, especially as they consider many surrounding towns to have given in to tourism. And rightfully they should be; Cinque Terre has remained locally owned and families are as closely knit as they were centuries ago. It is almost as if someone during the early years of Cinque Terre cast a spell that forces the towns and their inhabitants to live in a continuous time loop. 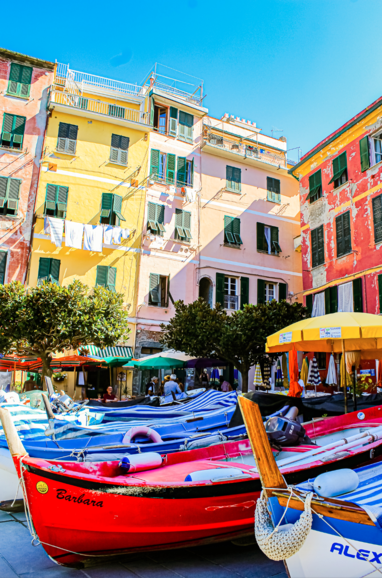 Step Back in Time with the Local Market

Not a single car enters the village, except early on Tuesday, when trucks and vans roll in for the weekly tailgate street market parties. This is when the magic happens; while the tourists are still tucked away in the comfort of their beds, the villagers, some of whom have never stepped foot in modern shops, come out to do their shopping. Teeming with smiles, laughter and warms salutations (everyone knows everyone) Cinque Terre’s family lead community comes alive. This is most clear by how the stalls are all still family-run businesses, and the son of the Flower stall sells flowers with a dramatic flair – opera singing. It truly doesn’t get more authentic Italian than this! 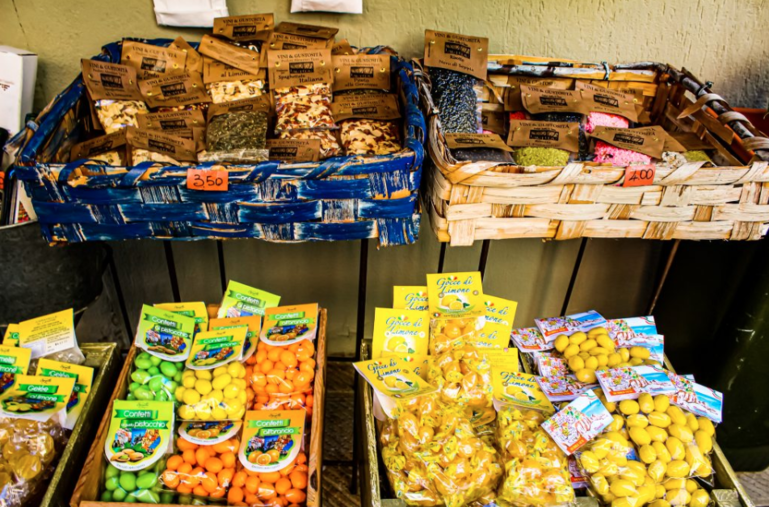 Some traditions are so far from fading. Villagers here are still heavily dependent upon the sea as small scale fisherman still earn their livings working their nets. And every single day restaurants count on these men to keep their menus serving Cinque Terre’s seafood specialities. Given its location on the Mediterranean, seafood is plentiful in the local cuisine and the anchovies are not only a local specialty but have been designated with a Protected Designation of Origin status from the European Union! These fish are just as famous as Cinque Terre’s pesto sauce. The locals make their pesto from locally produced basil leaves, garlic, saltwater, roasted pine nuts, pecorino cheese, and of course olive oil from the surrounding vineyards. 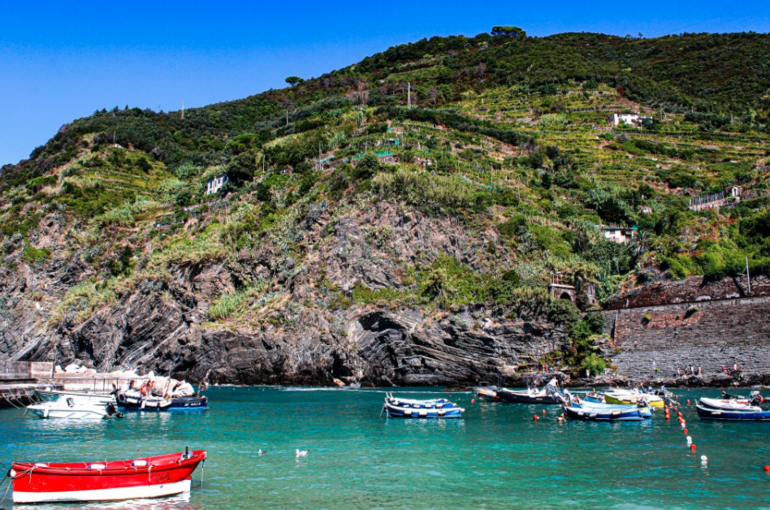 Not only do the locals cling to these main delights, but they’re still devouring focaccia. Focaccia originates in Cinque Terre and the bakers today follow the original recipe of stretching the dough to fit the tray, roughening it up with finger holes and filling it with traditional and locally sourced ingredients such as tomatoes, olives, olive oil and salty water. It still is the number one snack for the locals. 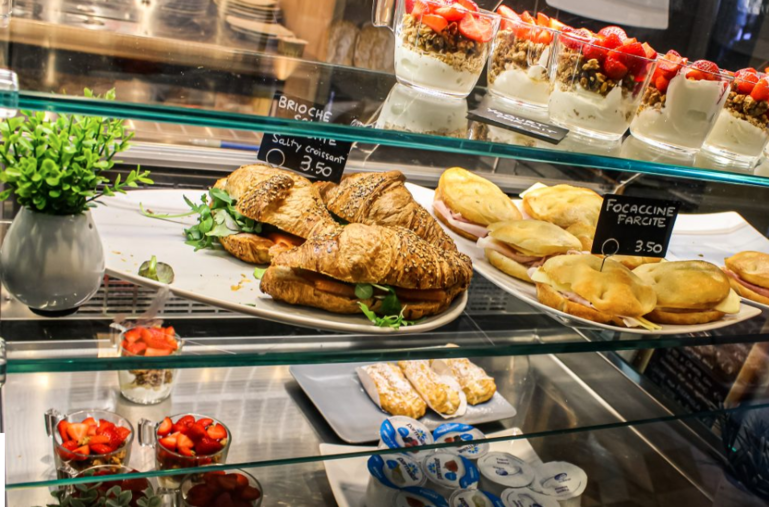 Cinque Terre has for centuries been blanketed with rolling hills and terraced green bouquet of cactus, olive trees and grapes. Speaking to any local, you’ll distinguish pride in their tone of voice and sparkling love in their eyes for their white wine. Their love for the original has meant that they have preserved traditional farming techniques. But they have combined this with modern knowledge as they prepare the delicate vines as the Romans did. 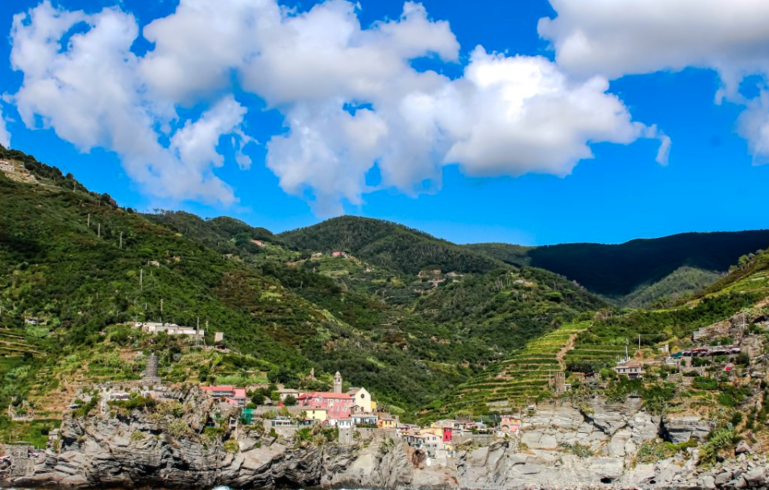 Even the farming maintenance has kept its roots – with over 4,000 miles of dry stone walls, stone masons of Cinque Terre artfully build and preserve these terraces with the same craft as was used centuries ago. This arrangement that man and nature have carved out is blissfully unaware of tourism, making it the most seductive stretch of Italian Riviera for its timeless appeal of authenticity, culture and heritage!

While I love to write alluring and inspirational travel stories, I know that some might be more interested in my travel advice for their upcoming trips.

Transport to & around Cinque Terre villages

Firstly, we did our day trip from Florence, as it is only a few hours away. To avoid the hassle of trying to navigate these five lands and having to rent a car, we joined a guided tour. Do not go with a tour guide! This was our biggest mistake; the tour guides narrated on a noisy speakerphone excessively both during the journey towards and from Cinque Terre – there was not a moment’s piece of quiet. I’d highly recommend hiring a car to drive to the first village and then hiking between each town. While you will face narrow and twisting cliff-edge roads, the scenery is unbelievable and there’s plenty of parking. You’ll have the freedom to go about your means without worrying about the guides’ schedules.

On top of this, the guides became a hindrance and very restrictive; They herded us like cattle around the towns, limited our time in each village according to their schedules, and insisted on us taking the train between lands. While there is a train line that connects all five villages, do not take it! We visited off season and yet these trains were packed like sardines. It was very uncomfortable, and we couldn’t see anything from the windows.

What I would recommend

We broke away from the group and took the boat between these villages. This instantly felt freeing and in keeping with these villages’ cultural tradition; their centuries old custom of earning a livelihood from the sea. Please remember that these hourly boats are only accessible from Easter holiday season through September and like the rest of Italy, their currency is Euro, so make sure to have some spare cash! If the boats aren’t working, hiking between towns is lovely and you’ll inevitably find yourself in an olive plantation! 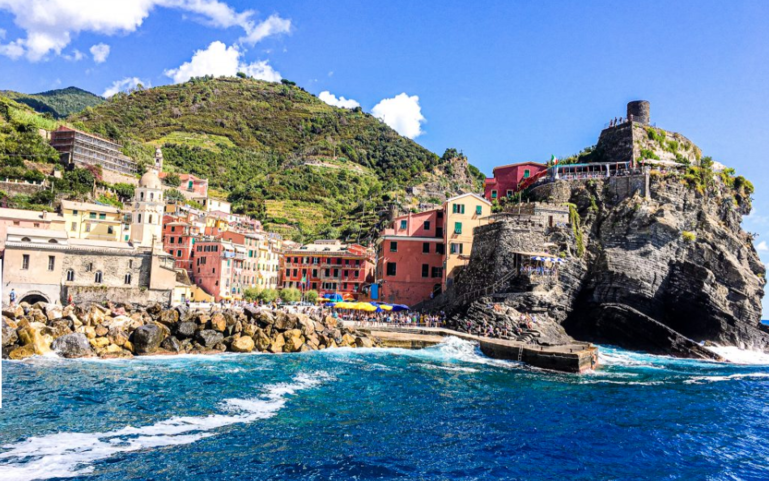 Cinque Terre is undoubtedly an intoxicating mix of nature, culture, and heritage. Its charms lie in its extreme isolation; its beauty is alluring, its lifestyle seductive and history thriving! For a relaxing and authentic Italian experience head to Cinque Terre, the place where the past is indistinguishable from the present.

I am a native English writer and I am super passionate about writing, photography and anything that allows me to be creative. I have always had a love of the written word and you can often find me writing on my own blog or tucked away in a corner appreciating the magical use of words by my favourite authors. I am the founder of Jade Braham's Odyssey. Jade Braham's Odyssey is one of the few travel websites that brings travel and history together. Our mission is to negate 'touristy travels' and instead create a community that travels through the Earth's history and authentic culture. Through my website, we travel to understand and find ... Read more 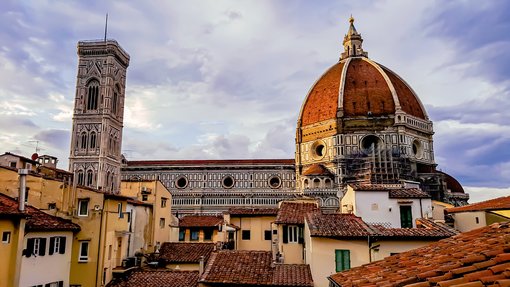 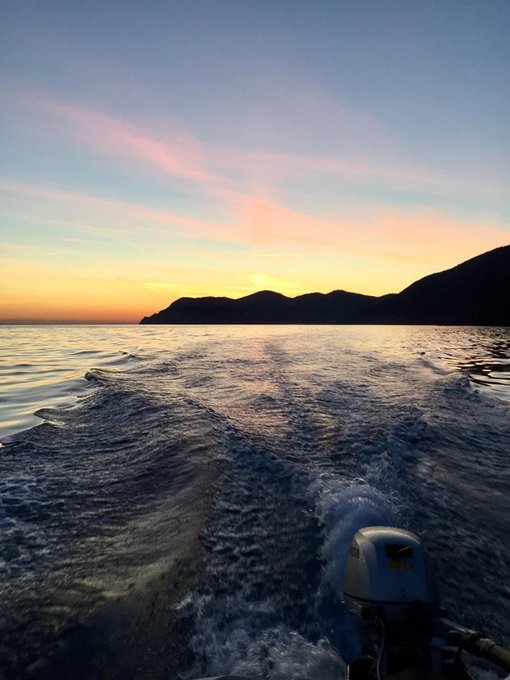 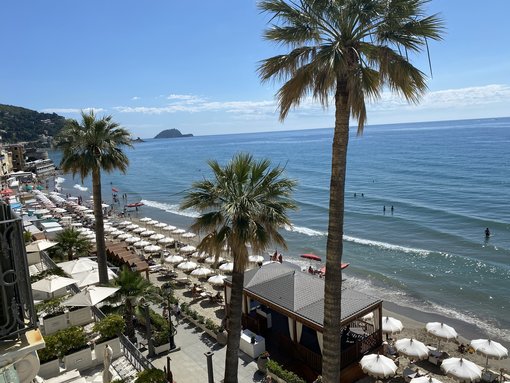 Day Trips You Can Take from Alassio, Liguria, Italy

Trekking Montepertuso Hole in the Rock